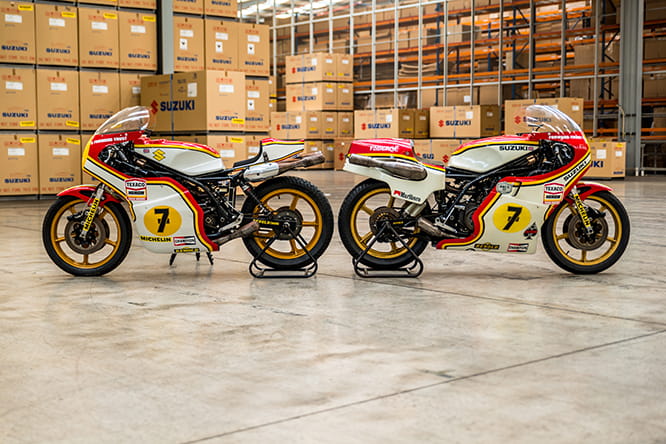 It’s forty years since Barry Sheene lifted the first of his two 500 GP world championships, and to celebrate his 76 and 77 championship winning bikes are back in the UK.

It’s the first time that both bikes have been on display in the UK together.

The first event in their diary will be the Sheene Festival at Oliver’s Mount later this month. Bike Social contacted James Sharpe from the Suzuki GB press office and he confirmed that there will be other outings for the two Suzuki RG500 racers that wear the iconic number 7. “They’ll be on display at the Formula One Grand Prix at Silverstone and the Barry Sheene festival at Oliver’s Mount this month. We’re also working on a number of other plans to display them at additional events throughout the summer.”

James also gave us some background on the Sheene machines.

“The bikes belong to the family. Barry took them to Australia when he emigrated”. James went on to explain how this scoop came about.

“Tim Davies, who’s Suzuki GBs aftersales marketing coordinator, put the wheels in motion to get them over for the Sheene festival primarily, as part of the 40 year anniversary since Sheene’s maiden title. He worked with the family representative to arrange airfreighting them over”.

We asked James if there were any plans for the bikes to be paraded, but currently both of the bikes are non runners.

SEE THE VIDEO OF THE BIKES ARRIVING IN THE UK

Sheene won back to back titles with Suzuki in 1976 and 1977, and although he went on to race Yamaha GP machines later in his career he remains synonymous with the Suzuki brand. We are looking forward to seeing these bikes together and applaud Suzuki GB for helping to make this happen.