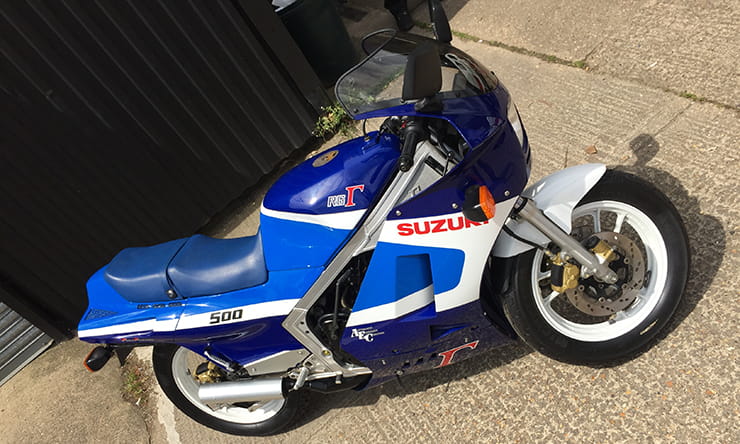 It’s 1987, Maggie Thatcher secured her job by winning the June general election, Terry Waite was kidnapped in the Lebanon and Whitney Houston wanted to dance with somebody.

Since these historical events this Suzuki RG500 Gamma has racked up just over a mile on its white faced speedo, and we’re pretty confident that this was a result of being pushed around.

The Suzuki RG500 was the best of the GP bikes for the road revolution that kicked off in 1984 when Yamaha launched their V4 RD500LC.

Since those smoky days of the 80s, the two stroke is also resigned to its place in the history books.

For us forty somethings the site of a Gamma can transport us back to our youth, and that’s exactly what this Suzuki Tardis did when I went to visit it at Wheels Motorcycles, Peterborough.

Surrounded by the current crop of superbikes from various manufacturers the Gamma is still the Guv’nor. 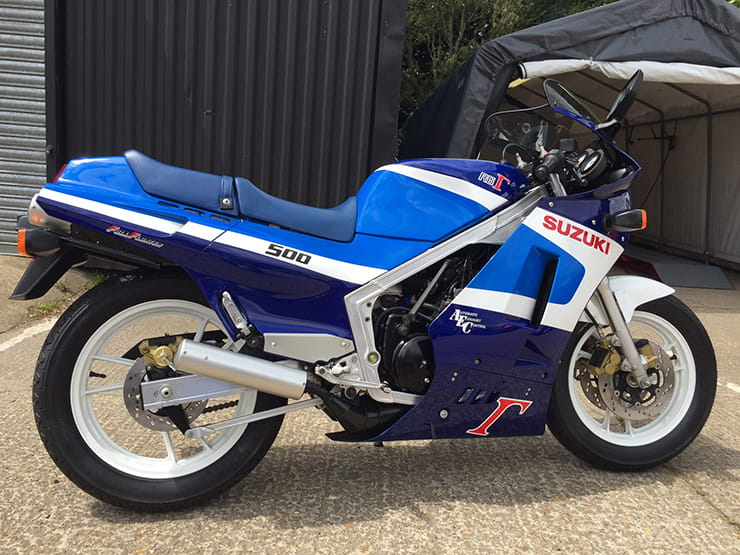 Pushing it outside, people all felt the need to comment and share their own Gamma tale, for us of a certain age we all have at least one. Have you?

The bike hasn’t ever been registered, I am eager to learn about its past, but info is sketchy. It’s come from a collection and if it had eyes it would be blinking, the paintwork is factory fresh, no signs of any fading and even the orange needles on the clockset are still bright, these faded within a few years from new on most. The stock Michelin tyres are still sat on the skinny rims, it’s 100 per cent correct. It’s a year away from burning 30 candles on its cake, there are a few signs of its easy life, the odd bit of alloy is tarnished, nothing terrible, and definitely not worth renovating.

The walls of the Michelins have dried out, and are heavily cracked when you stare harder, again this is just old age related.

The first RG500s suffered gearbox failures, so in 1987 the CH model came with cogs that were toughened up to avoid them being spat through the crank cases, the whole gearbox can be removed it one go, its cassette style design was taken straight from the RG500 racers that were born in the 70s. This bike could be an 89 model, but being unregistered it’s hard to pin point it’s exact date of birth. Bikes like this don’t come along very often, they strike up the debate about collectors depriving bikes from the market and how bikes should be ridden and not hidden. That’s the joys of a democracy, we are all entitled to an opinion. After asking a few questions I’m informed that Suzuki GB don’t even have any unregistered RG500s tucked away, making this bike even more unique. Prices for standard bikes have risen steeply over the last few years, and show no sign of bottling out, supply and demand dictating the currency of the Gamma. 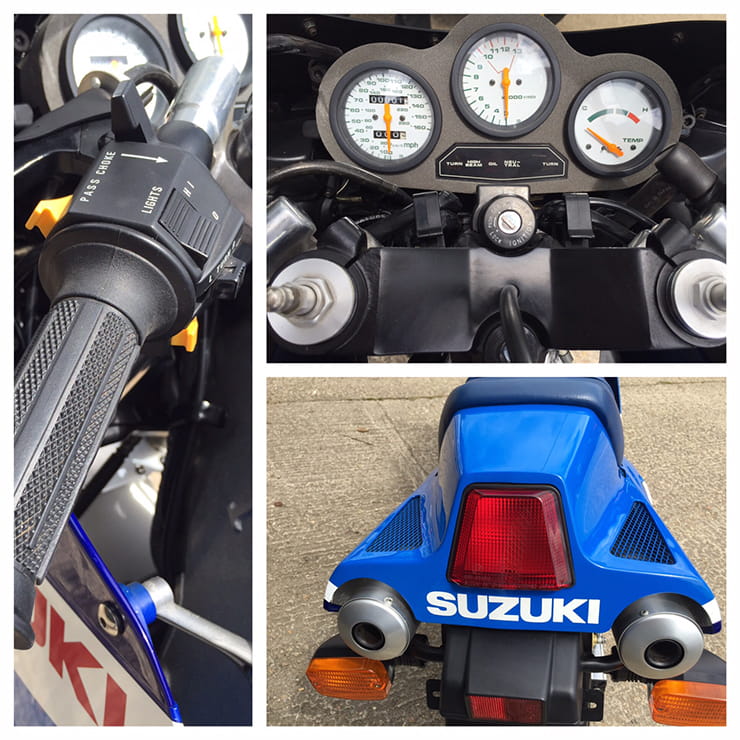 This one isn’t going anywhere at the moment, I spoke to Vinny Styles from Wheels Motorcycles and asked what’s the plan for the mile old RG500?

“We’ve got it in the workshop at the moment, we’ll give it a thorough valet and then have it on display in the showroom, we’ve got a few modern classics scattered about, there’s an immaculate R7 on stock and we’ve got a Yamaha RD500LC to join it too. There’s also a Honda RC30 lurking somewhere. The RG500 is already getting lots of attention, it’s an icon”.

It’ll be on display at Wheels alongside the Suzuki class of 2016 very soon, I wonder what models from this year's range are worth tucking away?