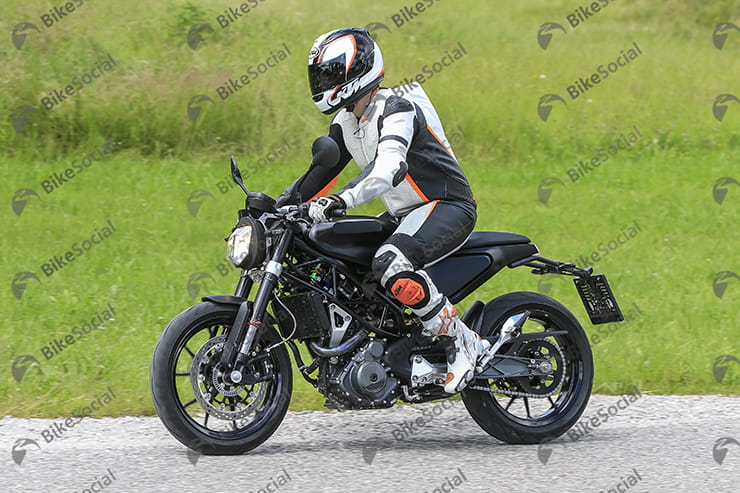 Ever since it changed hands from BMW to current owners KTM, Husqvarna has specialised in making its own unique takes on the Austrian firm’s machines – sharing as many mechanical parts as possible while looking distinctly different.

It’s already a formula that’s been applied to the company’s core off-road models, and now it’s extending to the new range of on-road offerings that are set to reach showrooms in 2017. The first two pure road bikes will be a pair of similar-looking machines going under the Vitpilen name.

Both the Vitpilen 401 – based on the KTM 390 Duke – and the 690 Duke-based Vitpilen 701 made their debuts as concept bikes. And these new spy pictures show that the production versions of both are going to be near-identical to the concepts that spawned them.

There’s no point in analysing the mechanical specifications too deeply. In terms of engines, frames and suspension both bikes are near-identical to their KTM cousins. It’s easier to pick out the differences. On the Vitpilen 401, the front engine brackets are redesigned and look chunkier than the KTM equivalents, and the fork bottoms, where the radial ByBre (By Brembo) calipers mount are slightly different to the current 390 Duke’s, but other than that that, if the bodywork, bars and pegs were removed, the bikes would look largely identical.

Those bars and pegs are important, though, since they’ll define the Vitpilen riding experience. The bars are much lower than a Duke’s, and the pegs further back for more of a café racer feel. The suspension is also lowered for a less supermoto-style ride.

It’s the same story with the Vitpilen 701, where the engine, chassis, brakes and suspension are largely carried over from the 690 Duke, but the style and feel are much more like a café racer. 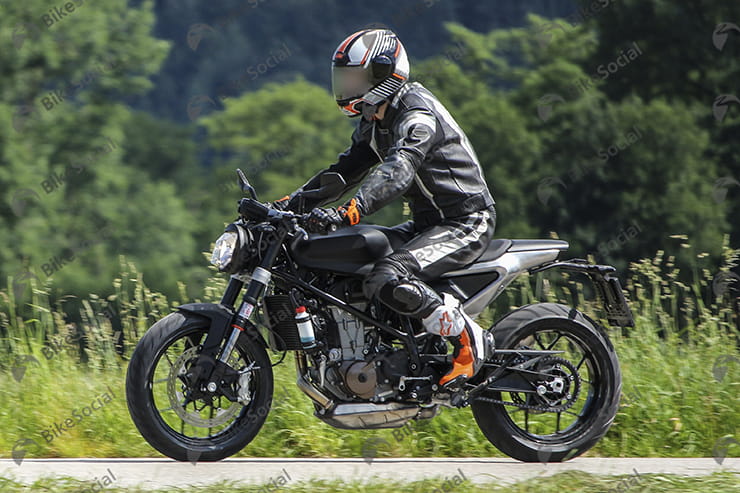 What’s notable with the latest prototypes is that they’re much, much closer in style to the original Vitpilen 401 and Vitpilen 701 concept bikes in terms of their overall appearance. Earlier prototypes seemed to have watered-down the styling, but the impression from these machines – which are much closer to being finished, production bikes – is that the firm’s bosses have told the engineering team to make them much more like the concepts.

If that’s what’s happened, it’s a good call. All too often, popular concept bikes are watered-down before reaching showrooms, losing much of the visual appeal that sparked customer demand in the first place. Not mentioning the Suzuki B-King or anything…

The latest prototypes, both of the 401 and 701 Vitpilens, show that there’s even a plan to get the concept versions’ oversized round headlights onto the finished bikes. While these test machines still use a different design, it’s now temporarily mounted inside a housing for the circular lamp that defined the ‘face’ of the concept bikes.

Further back, the tails also perfectly match the shape of the concepts. Again, earlier prototypes featured slightly heavier-looking tails, likely due to sharing the same under-seat fuel tanks as the KTM donor bikes. The impression of the latest spy shots is that the Husqvarna derivatives have now got their own tanks, shaped to fit perfectly under the skimpy-looking rear ends.

Another change that adds to the impression of a minimal tail is the repositioning of the pillion pegs. Earlier prototypes had passenger footrests hanging down from the tail unit, but the latest Vitpilen 401 prototype features passenger pegs that extend up from the riders’ footrest hangers instead. They’re missing altogether on the 701 prototype, but are likely to adopt the same design.

Both of these bikes are expected to make their official debut at the EICMA motorcycle trade show in Milan later this year, and in subsequent years will be followed by a smaller, 125cc Vitpilen as well as a range of scrambler-style Svartpilen  models that combine similar styling with knobbly tyres and wider, higher bars.