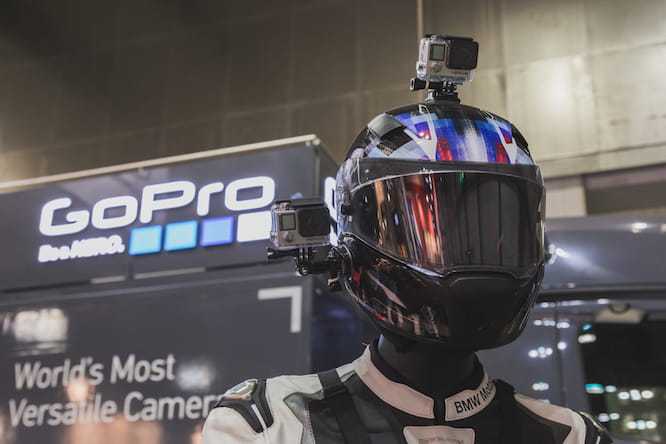 Whether they’re a cool way to share your rides with your friends or vital evidence in the unfortunate event of an incident, the use of on-board cameras has skyrocketed in the last five years.

With many riders attaching such devices to their helmets, debate soon arose surrounding the safety implications of doing so. In 2014, the Federation of International Motorcycling (FIM), the governing body for all motorcycle sport, banned riders from mounting cameras on their helmets in all FIM-sanctioned events in fear that devices attached to a helmet could prevent its ability to absorb impact.

However, new research conducted by the Transport Research Laboratory on behalf of BBC Safety suggests helmet cameras aren’t as dangerous as previously feared.

The study sought to investigate the potential effects of mounting a camera on the safety performance of helmets. A range of commonly-used climbing helmets were tested with cameras mounted at the front, side and top of the helmet using either sticky mounts or straps.

Energy transference to the head was measured during standardised impact challenges, in line with a number of European standards.

The results showed all helmet-mounted camera configurations investigated may be mounted at all three impact locations without increasing the risk of head injury.

“Concerns have been raised about the safety implications of fixing cameras to helmets, so it’s encouraging that the configurations tested still meet the required safety standards,” said Richard Cuerden, Chief Research Schientist at TRL.

“But while the results are promising, it’s important we don’t assume the outcome will be the same for all helmet and camera configurations. Other variables not tested could result in different injury outcomes, so further research and testing is required before we can confidently say that all helmets, scenarios and designs will achieve the same result.”

With the tests conducted on climbing helmets, we put the question to our social channels to find out what real riders think about the dangers of helmet cameras.

“Anything on your lid is dangerous in a crash, as it can stop your head rolling as the rest of your body continues,” said Rich Beach.

Rob Hart added: “I don’t think it’s dangerous, it would just snap off. I wouldn’t ride without a camera now.”

Martin Crockford pointed out the size of such cameras is an issue: “I absolutely agree they are a good idea. The problem lies with strapping a brick to your helmet. It should be the size of a mobile phone camera with the recording equipment via a cable in your backpack. I can’t see any reason why you would strap a GoPro to the side of your helmet.”

“Being a motorcycle courier having a helmet camera should be standard issue,” said Matthew Mepham. I’ve done 120,000 miles in four years having five accidents, all non-fault. They can be dangerous if not secured properly, wouldn’t want the camera to come off doing 70mph with vehicles behind you, but you can buy an extra adhesive security mount that can stop that scenario. They are definitely not dangerous in the right circumstances.”