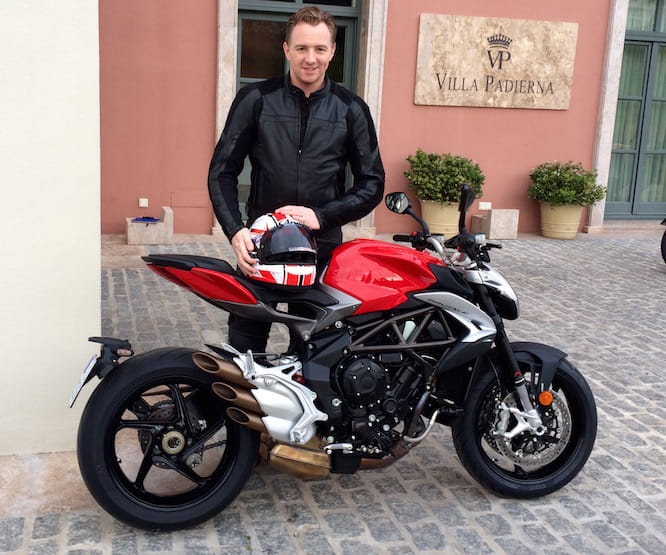 MV Agusta is set to introduce a heavily upgraded version of the Brutale 800 this month, with revised styling and a number of engine modifications to bring the bike inline with Euro 4 emissions regulations.

The £10,499 lightweight Brutale 800 (175kg dry) gets updated with a new bigger triple exhaust system to meet Euro 4 emissions regulations and a power output reduction from 125bhp to 116bhp. However, torque is up by 25 per cent to 61ft-lb and the spread of that torque has also been revised, “for balance” say MV, allowing for more at low/mid revs. 18% more in fact and thus a faster accelerating machine.

Among the other amends to the new bike are an increase by 20mm in wheelbase, a raised centre of gravity, a more comfortable riding position given the increase in distance between seat and foot pegs. The geometry of the rear shock has been amended to permit greater weight transfer to the front under braking without relinquishing rear grip and stability.

In terms of electronic tricks, the Brutale 800 has three riding modes (Rain, Touring, Sport) plus a customisable one, ride-by-wire throttle control, a quickshifter (up and down) with auto-blipper and an 8-stage traction-control. Its high-end spec doesn't end there - Marzocchi forks, Sachs monoshock, Brembo brake calipers and, for the first time ever on a production bike, a set of awesome Pirelli Diablo Rosso III fitted as standard.

Bike Social’s Michael Mann is in Marbella at the launch of the new MV Agusta Brutale 800, and ahead of the first full road test, here are his first impressions of the Italian beauty:

The exotic looking Brutale offers one hell of a ride. The power to weight ratio is good and even though the wheelbase has been increased by 20mm from the previous model it still retains its extremely agile nature.

The fast-revving engine has a relatively calm existence up to 3-3,500 rpm then a heap of torque is suddenly available from the controllably sensitive throttle. The motor powers through the revs up to its max of 12,500rpm. Anywhere over 10,000 and your ears will be ringing with the triple's howl.

In the three pre-set rider modes the Rain setting reduces horsepower and winds on more traction control while Sport gives you the full 116bhp but reduces TC. Normal balances everything out and there's also a customisable mode. I prefer the bike in Sport given its lively nature and better drive out of the tighter turns.

The seat is very narrow at the front and its correlation to the foot pegs offers an inviting riding position, though the seat itself is quite firm. I prefer it this way, some riders might not. Worthy of note are the two horizontal 'fins' that form part of the lower fuel tank that are noticeable when you first ride, they are positioned right against the inside of your knee.

What the Brutale offers is magnificent refinement. The build quality is obvious on first inspection and during the ride, it gives the rider a sense of quality which translates through its impressive array of top-spec gear such as the Brembo equipped brakes, Marzocchi forks and the awesome Pirelli Diablo Rosso IIIs.

While the standard suspension setting, particularly on the rear Sachs monoshock, is firm enough, it only offers advantages on the smoothest of roads. Thankfully it's fully adjustable.

The quick shifter is a thing of beauty and is the perfect match for the tune the three-cylinder 800cc motor sings. The hydraulically-assisted clutch lever is only required when moving off and on the downchange below 20mph. Other than that the auto-blipper system is a joy, so much so that it encourages gear changes even when not required!