Honda continued its domination of the 2014 Dakar Rally yesterday as Joan Barreda took a strong victory in stage three, the first leg of the first marathon stage. Honda has taken victory in all three stages so far, with Barreda on top from the first stage and Brit Sam Sunderland taking victory yesterday.

The day’s special had to be cut in length following recent heavy rains on the first part of the stage leaving it unsuitable for racing. Nevertheless it remained one of the most demanding stages yet, seeing top riders losing a lot of time including yesterday’s stage winner, Sam Sunderland.

Riders endured seep hills and slopes and rode along mountain tracks before arriving at the bivouac where, as this is part of a marathon stage, they will find nobody but their HRC team mates. Barreda now leads the overall standings by thirteen minutes and is yet to finish a stage off the podium. 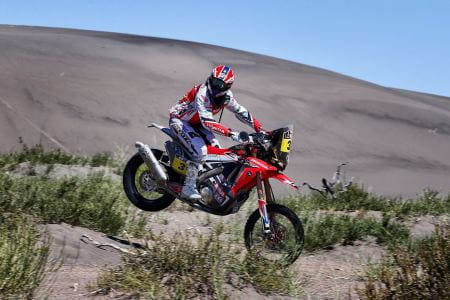 This has been a really exceptional special, one like the Dakar has never seen before. Not only for the altitude but also for the hills and the steep slopes that we have had to endure” explained Barreda, who finished the stage over four minutes ahead of his closest rival.

“It was like a trial. In second gear, revved up, then stopping for breath before taking off again. A real trial run where you just had to try and not make any mistakes and keep up the concentration. The navigation was really tough and at no time did I really stop to see if I was on the right path.

“We crossed a few rivers at the start. I caught up with Chaleco and then Sam, who I saw had taken the wrong route. From then on I did the rest of the special on my own. In the final few kilometres on the way down I was able to open the throttle until the end. It really was a difficult one for everyone.”

Five-time Dakar winner, Cyril Depres claims the special was one of the most stunning he’s completed as he recovered from a tenth place finish in Monday’s stage to come home second behind Barreda. This sees the Yamaha rider jump from eighth to second in the overall standings.

“Today’s special has to go straight into the Top 5 most stunning specials I have done in 13 years of racing rallies – and in that time I’ve been to some pretty amazing places!” explained Depres.

“At kilometre 299 we came to this incredible 3km climb. It was a really, really hard to get up and I can only begin to imagine how many riders will go out of the race at that point – and it’s not just the amateurs who are going to struggle.

“Then after that we rode for about 60km on stunning tracks over a series of mountain ridges, as beautiful as they were difficult to navigate. Towards the end I came up behind and past both David Casteu and Marc Coma. All in all an excellent day that more than makes up for yesterday’s disappointments.” 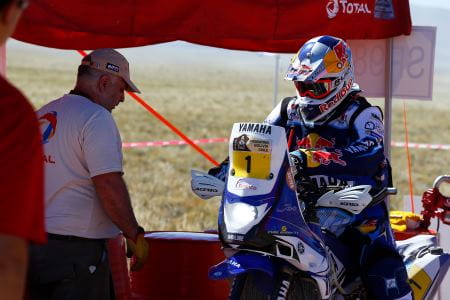 The second leg of this marathon stage continues Wednesday, where riders’ navigational skills will face a serious test. Having not had provisions to change tyres overnight in the bivouac, tyre wear will play a crucial role as they cross rivers, descent the canyons. With wide-open terrain this stage is the perfect opportunity to overtake competitors and gain a bit of time.