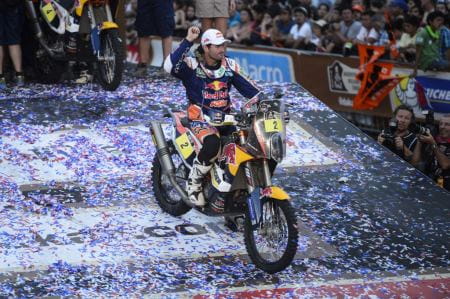 Factory Red Bull KTM rider Marc Coma stormed to a dominant fourth Dakar title on Saturday afternoon, finishing the rally just short of two hours ahead of his KTM team mate, Jordi Viladoms. Coma took the lead of the rally after stage five, when Honda’s Joan Barreda lost significant time after a seventeenth place finish. Coma led the rally from there on in, finishing no lower than fifth in any individual stage.

Barreda fought hard on HRC’s factory return to the Dakar, taking four stage victories. He came back from the seventeenth place finish on Stage 5 to show strong form but couldn’t touch Coma’s consistency. A podium was still on the cards for the Spaniard until a heavy crash on the penultimate stage saw him ruled out of that challenge.

Brit Sam Sunderland made a great start to the rally with victory in the second stage, although it was short-lived for the 24-year-old was ruled out with engine failure on stage four.

“Without the right people behind me it would have been impossible to win” said Coma on taking his fourth Dakar victory.

“We have worked very well throughout the race and also before. Last year I went through a very difficult situation not being able to compete because of injury and I came back to win the race. I think this says a lot about the people I have around me. I am very proud of this victory. The key to winning the Dakar was not to make any mistakes.”