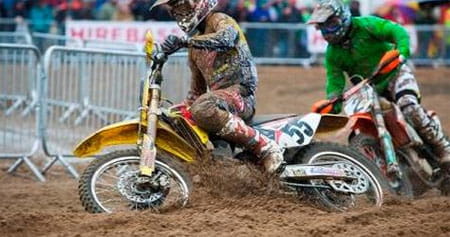 The Weston Beach Races are perhaps one of the toughest races in the world andwhen you add the inclement weather most of the UK saw over the weekend things soon become very interesting. The main feature race, the three hour solo race saw dark skies and rainfall over the challenging beach course.

Scott Elderfield took the holeshot, shooting out of the gates on his KXF450 from the chasing pack as they blasted down the beach and incoming tide. It became clear that the motocross guys were superior in the conditions, with the enduro lads dropping back after just a few laps with many succumbing to the challenges of the tough track and pushing their bikes back to the pits.

After two hours and fifteen minutes, while he was still leading, Elderfield’schain snapped his chances of victory were scuppered. This would mean Graeme Irwin inherited the top spot followed closely by Nathan Watson. The pair putting in such impressive pace they lapped every rider up to third place.

The drama wasn’t over though, with just moments left Irwin crashed heavily on the dunes with his Suzuki landing on top of him. Miraculously he managed to get the bike up and limp it home in considerable pain ahead of Watson’s KTM. Mark Moffat finished third.