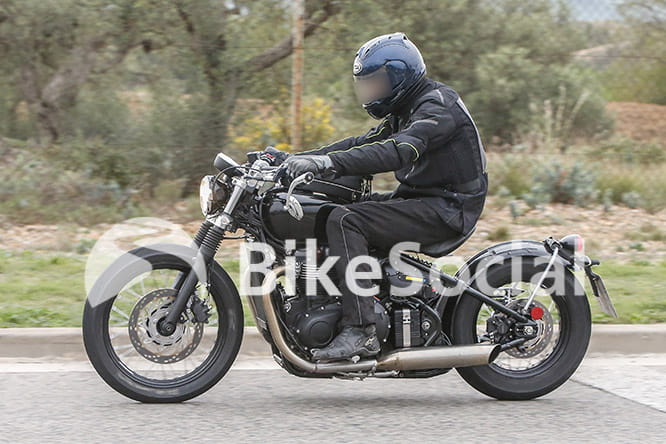 With Triumph introducing new powerplants for its classic models this year, it’s no surprise to see that the Hinckley company is working on a new small capacity cruiser.

Shots have emerged of a new ‘bobber’ style machine that is likely to come into the range and replace the current Speedmaster model, which is powered by the old air and oil cooled 865cc twin.

Other firms might be scrambling to get Scramblers onto the market but Triumph has something of a sixth sense about future motorcycle trends and it’s putting its money on bobbers being the next genre of motorcycle to take off.

Triumph has already been ahead of the game with Bonnie-derived machines in the past. The first Hinckley Bonneville itself second-guessed the coming of the retro bike revival, while the Thruxton jumped on the cafe racer bandwagon before its rivals. The Scrambler has been a Triumph model for years, long pre-dating the recent spate of rival offerings (and a certain Ducati bearing the same name.)

So, by luck or good judgement, the chaps at Hinckley have been on the money when it comes to spotting trends. Could the bobber be the next genre that rival manufacturers will pounce upon?

From these spy pictures of the company’s forthcoming Bonneville-based bobber, they might be onto something, too. While in recent years the term ‘bobber’ has been intrinsically linked to American custom bikes its origins lie in the same thinking that created cafe racers. Back in the post-war period riders would strip every ounce of unnecessary weight from their bikes – removing or cutting back (‘bobbing’) mudguards in particular to gain performance. Low bars and single seats completed this two-wheeled equivalent of a hot rod.

Triumph’s new bobber follows the recipe to a tee. There’s no stretched out head angle or bling chrome in sight, just a bike that’s had all the unnecessary bits taken off.

To get the traditional look, the firm has created a fake hardtail frame. It’s pretty convincing, but like Harley’s Softail there’s a hidden rear shock under the seat, acting on the top member of the diamond-shaped swingarm that so cleverly follows the lines of the tubular steel frame.

There’s zero provision for luggage or passengers here, just a tractor seat style saddle that’s seemingly suspended in mid-air. The rear fender is attached to the swingarm, so don’t expect there to be any scope for pillions or panniers – this isn’t a bike aimed at long-distance riding, and the sitting-on-the-toilet riding position backs that up. However, the wheelbase is still fairly short and the head angle is just as steep as the stock Bonnie’s, so handling might be better than you’d imagine.

There’s no word yet on which version of the engine the bike uses. At the moment, Triumph has three separate derivatives of its water-cooled parallel twin. The entry level is the ‘high torque’ 900cc motor used in the Street Twin, but there’s also the 1200cc ‘high torque’ version used in the Bonneville T120 and a ‘high performance’ 1200 that appears in the Thruxton.

We’d suggest that the bobber will hit the market with the lower spec 900cc motor to make it appealing to a wide range of riders and to distinguish it from the bigger Thunderbird models.

The fact that the bobber features just one front brake disc, like that of the Street Twin, suggests that it’s not using one of the faster versions of the engine. Since all the latest twins use a 270 degree crankshaft, the bobber will inherit a V-twin-style firing rhythm despite its parallel layout.

The bike in these pictures is still missing a few components that the production model will gain. The lack of a front mudguard might be a convincing bobber styling cue but it’s not one that the authorities will approve of, so that’s going to change for production, and there’s clearly a missing side panel due to be fitted over the modern-looking electronics visible behind the engine. Those tweaks aside, the bike is largely complete, so there seems little reason to expect Triumph to wait until the end of this year to launch the bike.

The firm has often tended to launch one model in around May or June each year, so keep an eye open then for the finished version to appear.