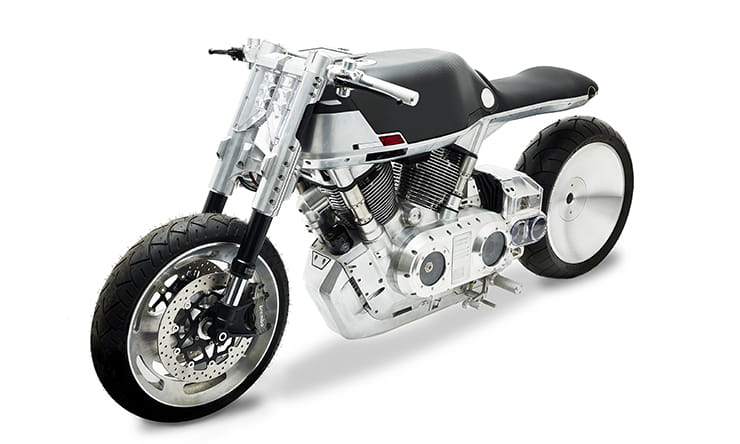 Blurring the lines between motorcycle design and industrial sculpture the new Vanguard Roadster – set to be launched in New York this weekend – is a jaw-dropping creation whether you love or hate its style.

But what’s really surprising is that this isn’t a show bike, a custom one-off or a mere concept model. It’s the prototype for a bike that’s planned for production in 2018 with a surprisingly down-to-earth price projected at $30,000 in America. That might not qualify as cheap, but it’s far less than the $100,000-plus that it would be easy to imagine a bike like this costing.

Never heard of Vanguard? That’s no surprise. The firm is as new as the bike, but it has a solid footing in the industry. It was founded by entrepreneur Francois-Xavier Terny, a former board member at bike-builder-to-the-stars Confederate Motorcycles who made his fortune with his consultancy firm Masai, which specialised in industrial cost optimisation, and Edward Jacobs, who was Confederate’s director of design from 2005-2011. The pair began working on the project in 2013 under the FXE Industries banner before settling on the Vanguard name.

Mechanically, there’s a 1917cc V-twin based on S&S’s X-Wedge engine, making 110lbft of torque and around 100bhp. As well as providing the motive force, it doubles as the bike’s main structure, with a large aluminium part bolted above it to attach the tank, steering head and seat. Even the exhaust is almost completely hidden within the structure, but underneath the engine lies all the emissions gubbins needed to get past Euro4 regulations – opening up the possibility for the bike to be sold in Europe as well as America.

The single-sided swingarm encloses a shaft-drive transmission and hides the rear shock – an Ohlins unit mounted in the upper section of the swingarm. Ohlins also provides the forks, while the brakes are Brembo radials. 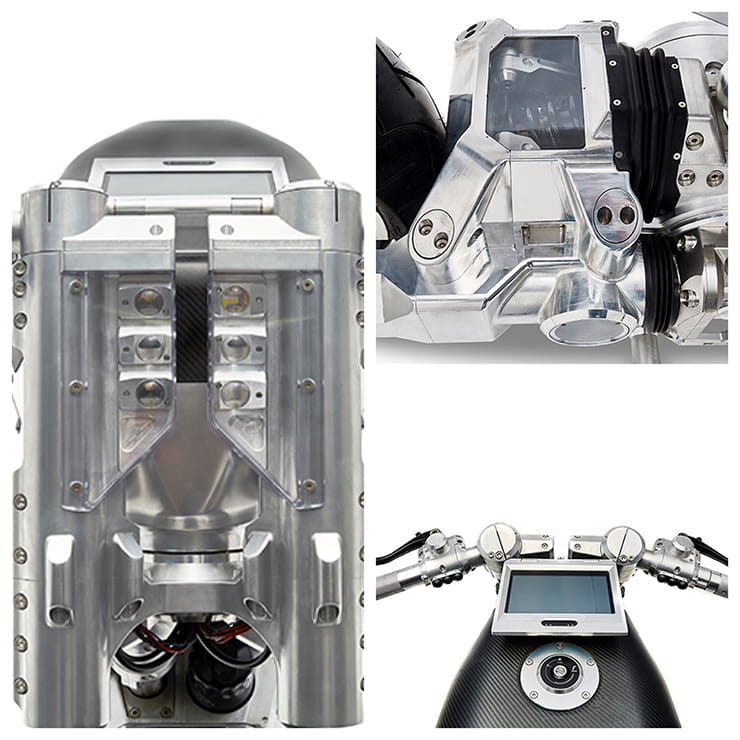 Perspex covers give a view into the timing case and even give a glimpse into the shaft drive transfer box. You can also peer into the top of the swingarm to see that Ohlins rear shock.

While most of the bike is finished in bare aluminium, the 21-litre fuel tank is carbon fibre. Above it sits a tablet-style flat-screen display that not only incorporates the instruments but will also display a images from a rear-view camera that’s tucked into the tail unit. To meet European legal requirements, the production versions will need mirrors as well – plus mudguards and a licence plate hanger – but the overall look of the bike isn’t expected to change significantly.

Eventually, the firm plans to make another two models as well as the Roadster, all based on the same engine and chassis design. The final range will include the Vanguard Cruiser and Vanguard Racer as well, with styling and riding position changes to suit their respective names.

The bikes will be assembled in Brooklyn Navy Yard, New York, using large sub-assemblies and parts sourced worldwide. Although the first bikes aren’t due to roll off the lines until 2018, the firm is taking pre-orders for the first 200 production Roadsters. See www.vanguard.nyc for more details on how to get your name on one.