NEXT year will see a completely new look across KTM’s range as the company adopts a new family ‘face’ for its bikes.

We’ve already seen spy shots of various Duke models from the 390 right up to the 1290 Super Duke R, and now our man with the long lens has caught the full V-twin Adventure range on test.

Like the rest of KTM’s new and updated models, the talking point of the 2017 Adventure models is certain to be the new family look. KTM is ditching the single-headlight style of its current line in favour of a radical new appearance with two slim, vertical light units split down the middle by a vertical slot that’s likely to double as an air intake on some models. LED daytime running lights sit behind a frosted outer edge on either lamp. The overall effect might not be conventionally pretty but in terms of establishing an instantly-recognisable appearance it’s undeniably effective. When you see a 2017 KTM approaching, you’ll know the manufacturer long before you’ve seen the badge or the inevitable splashes of orange paint. 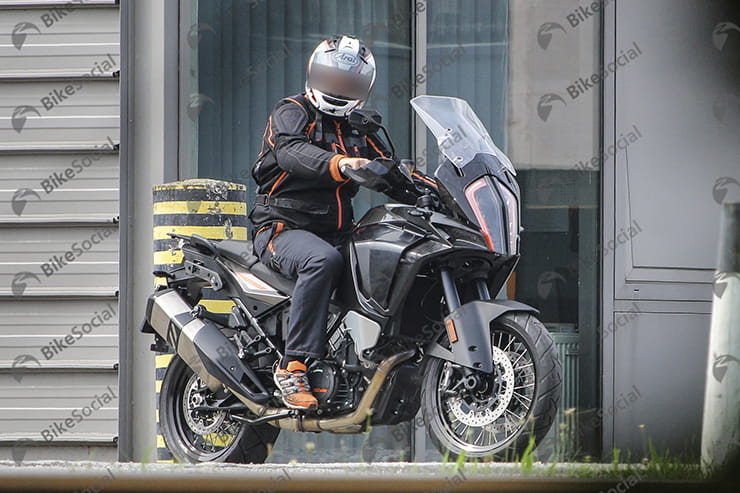 The middle model of the Travel range is really the mainstream offering here, going toe-to-toe with the BMW R1200GS that looms over the adventure bike class and endlessly tops sales charts around the world.

As usual, the KTM offering is a more extreme option. That won’t change for 2017 even though the new bike is sure to be more civilised than ever before. The frontal styling change is the main update, although there are also new WP forks on display here.

The nose styling change includes a different adjustable screen and new side panels with larger air intakes than the current bike. From there back, though, the changes are minimal. The tank, seat, chassis and exhaust all appear to be unaltered – the tail unit is straight from an existing 1190 Adventure, right down to the graphics on the side.

Mechanically, the bike is sure to be tweaked to make it pass the Euro4 emissions rules that apply to all new bikes next year. However, this doesn’t appear to be a problem for KTM, and power is expected to remain at or near the current model’s impressive 147bhp. 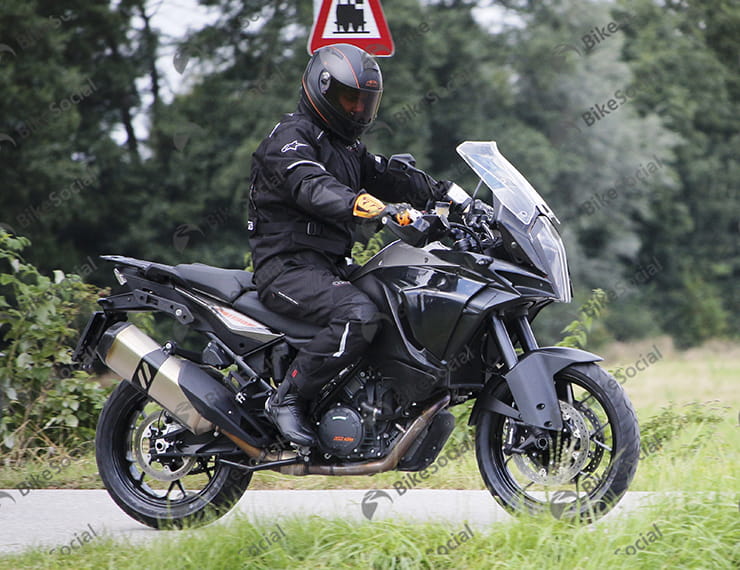 Although the tail unit of this prototype carries “1190” stickers, it’s thought that this is actually the entry-level 1050 Adventure.

The giveaway is its use of alloy wheels instead of wires. The wheels – like most of the chassis – appear to be identical to those of the current 1050 Adventure model.

Just like the current bike, it’s almost inseparable from the 1190 version in terms of appearance, and of course it also gains the new split-headlight nose treatment.

The use of an 1190 seat unit on this prototype could indicate that the 1050 is to get the same split-level seat as its bigger brother next year, too, replacing the flat, single-piece version of the current model.

There’s some talk that the 1050 will adopt the name ‘1090’ in 2017, too. That would be in line with the rest of KTM’s naming policy, but it’s unlikely that the engine will actually gain any increased capacity. The bike’s power – at 95bhp – is very unlikely to increase. Current European legislation says that restricted ‘A2’ licence bikes (with a maximum of 47.5bhp) can’t be derived from machines with more than twice that power. Hence at 95bhp the 1050 is right at the limit of what can be legally restricted to A2 levels, and KTM won’t want to eliminate that potentially large market in pursuit of a couple more horses. There’s always the 1190 version for buyers wanting better performance.

Like the 2017 version of the 1190 Adventure, it appears that this bike also adopts a new set of WP forks, but changes are otherwise largely limited to the restyled nose. 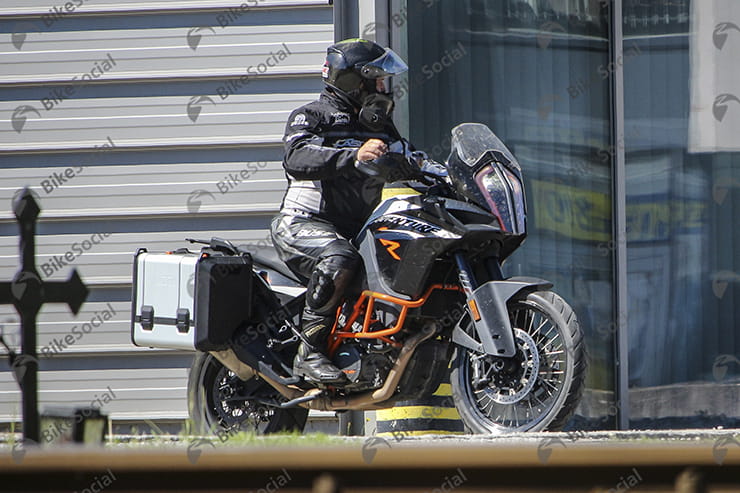 Just like its siblings, the Adventure R’s most obvious change is the new front end styling. But in the case of the R it’s even more pronounced thanks to the bike’s cut-down screen.

This particular prototype doesn’t appear to be quite as advanced as the others. While it has the new headlight treatment, with an intriguing orange tint to the frosted DRL section around the edge of the lamps, and the new upper fairing section and air intakes, it lacks the redesigned side panels that appear on the other two prototypes.

Like the other bikes in these images, there are new bottoms to the forks including redesigned brake caliper brackets, but being the ‘R’ the forks themselves are higher spec WP units. They don’t appear to be the latest semi-active ones as used on the 1290 Super Adventure, though.

All three models, as well as a host of other new and updated KTMs, are expected to appear at the Intermot show in early October and to go on sale at the start of 2017.