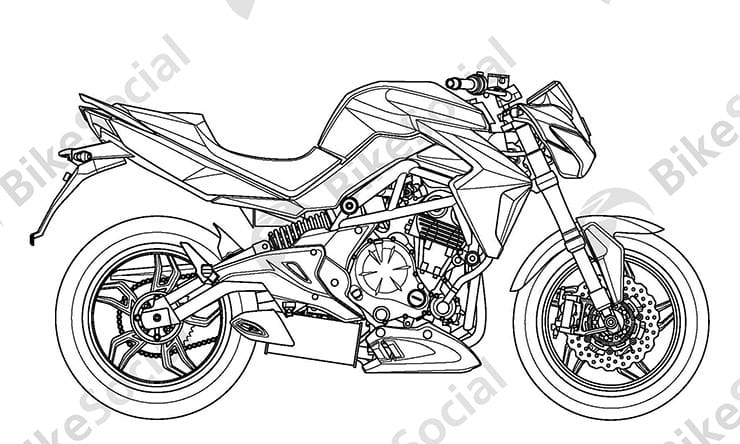 The tie-in between Taiwanese firm Kymco and Kawasaki has already spawned the Kymco-powered, Kawasaki-branded, J300 and J125 scooters. Now the trade looks set to go the other way with Kawasaki providing its 650cc ER-6 engine to Kymco for a new naked sports bike.

These are official design drawings for the new bike, and show quite clearly the Kawasaki ER-6 parallel twin, including what appears to be the same exhaust system as the ER-6 and even the same swingarm.

The frame is new, though, with a trellis-style design instead of the twin-tube chassis used on the Kawasaki. It’s also clear that, since this will be a range-topper for Kymco rather than an entry-level model like the ER-6 is to Kawasaki, the suspension and brakes have been upgraded. Upside-down forks and radial brake calipers are clearly a step up from the conventional alternatives used on the Kawasaki ER-6n.

The styling appears to be extremely angular, but this is in part down to the line-drawing technique of the pictures. In finished form those sharp edges might not seem quite as origami-like, although it’s clearly a design that adopts the trend for creases over curves.

The bike marks the first step for Kymco into the world of mid-sized bikes, and it’s not yet clear if the model is intended to be sold worldwide. However, it’s likely that a bike this size will be intended for Europe rather than just Asia. 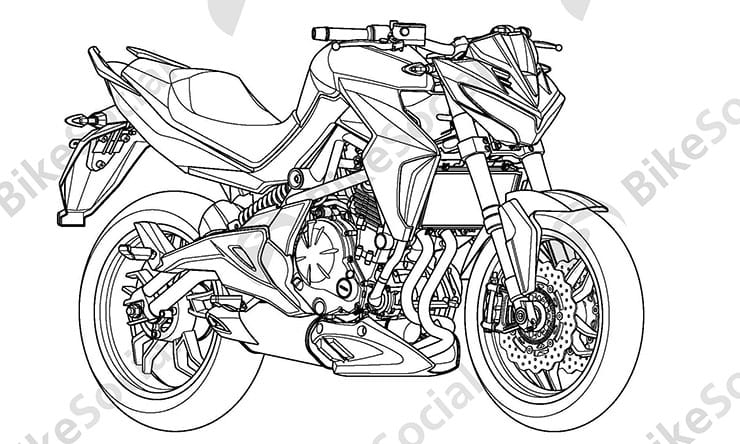 In terms of specification, the use of the ER-6 engine means we can have a good stab at the bike’s potential performance. The power is likely to be on a par with the Kawasaki at 53kW (71bhp), and the weight should also be similar at around 210kg ready-to-ride.

The relative positions of the bars, seat and pegs show that the bike’s riding position will also be very similar to the ER-6n’s, although the Kymco’s tank looks bulkier and taller. Pillions will also get a very similar deal to the Kawasaki.

There is a slim chance that the bike seen here could actually be sold as Kawasaki’s next-generation ER-6, with the Taiwanese firm taking on duties of building it. It’s certainly possible to see some Kawasaki-esque elements to the design – the angular theme tying in well with bikes like the Z1000. The petal-style brakes are also very much a Kawasaki favourite.

However, it remains more likely that the manufacturer will have its name on the finished bike. As such it’s probably intended to target the market for low-priced, mid-sized machines – an alternative to a used ER-6 rather than a new one.

CFMoto’s newly-revised 650NT (to be sold as the WK Bikes 650i in the UK) will probably be its main challenger. Revamped for 2017 with styling by KTM’s design house, Kiska, the latest 650NT is a much more convincing-looking machine than its predecessor. Although not yet launched in the UK, it can be seen here http://www.cfmotonk.com.au. The CFMoto also houses an engine that’s near-identical to the Kawasaki ER-6 in dimensions, performance and layout although it’s not directly related to the Japanese motor.