New spy photos reveal that Ducati is working on a much more serious off-road-capable version of its retro Scrambler.

The shots show a heavily-disguised bike that’s clearly based on the firm’s hugely-successful Scrambler but that has obvious changes to improve its capabilities when the going gets rough.

Starting at the front, the upside-down forks appear to be notably longer-travel than the existing Scrambler’s, pointing at a ride height that’s significantly loftier. While a wall blocks the view of the lower half of the bike, it also appears that the front wheel is larger-diameter, probably 19 inches instead of the stock 17-incher, to give better handling over bumps.

The high-mounted front mudguard is similar to the existing ‘Urban Enduro’ version of the Scrambler, but the tank shape appears to be slightly less retro, as though Ducati is harking back to the late 70s or early 80s instead of the 1960s. A long, flat seat with bright yellow flashes at the back also gives the bike more of an 80s enduro look. 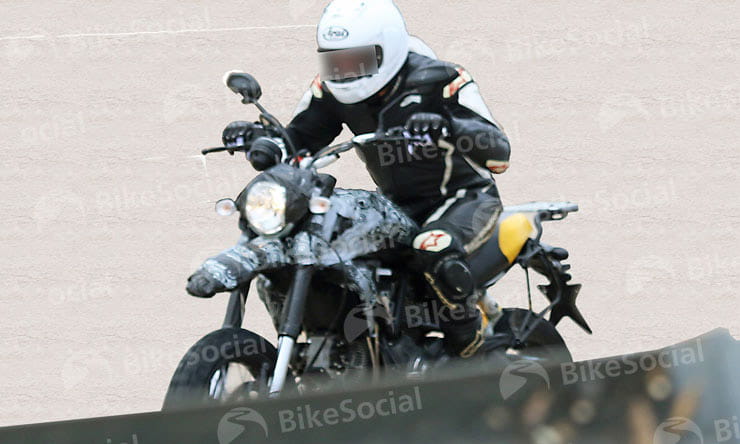 Behind that seat there’s a conventional licence plate hanger on a high-mounted rear fender. Again, that suggests Ducati is taking the bike’s mud-plugging more seriously, as it replaces the swingarm-mounted licence plate holder of the normal Scrambler, which sits too close to the rear tyre for muddy work.

While there’s still plenty of speculation that Ducati is planning a larger-capacity Scrambler, the indications are that this retains the usual 803cc V-twin. There’s only a single front brake disc, for example, where a more powerful version would probably have twin brakes.

However, it does appear that the chassis has been beefed up, probably to improve its off-road durability. It seems that an extra steel tube has been added to the trellis, running horizontally between the front and rear engine mounting brackets. That would add rigidity to a section that normally relies purely on the engine to provide its strength.

What little that can be seen of the swingarm seems to be the same as the existing Scrambler, although the rear ride height has also been increased. A remote-reservoir Ohlins shock adds to the impression that the suspension specifications have been increased for the new model.

A rear carrier and tubular frames either side to allow panniers to be fitted suggest that this version of the Scrambler will be offered with the option of big-trailie-style luggage – something along the lines of the chunky aluminium boxes that seem to grace every BMW GS would make sense in the segment.

The wall hiding the lower section of the bike means we can’t see other changes that are likely to have been implemented. A bash plate must surely have been added to protect the V-twin’s sump and the front cylinder’s exhaust pipe. Speaking of exhausts, we also can’t see how Ducati has addressed the end cans. The fact that the bike is intended to be used with panniers means high-level pipes on the right hand side, like the current bike’s optional Termignonis, are unlikely to be used. Something more like the stock Scrambler’s low-mounted end can makes more sense, although it might need to be extended or reshaped to ensure that it’s not blasting gasses straight at the pannier when luggage is fitted.

Chances are that the bike will be officially revealed at the EICMA show in Milan this November.