We’ll be the first to admit that these aren’t the greatest spy pictures we’ve ever had but if you bear with us we’ll explain why we’re convinced the bike being tested here is Triumph’s 2017 Street Triple 800.

The fact that the Street Triple is up for a major revamp is beyond question. As with so many other machines, it’s going to need changes to meet the new Euro4 emissions limits and leaked documents have already revealed that Triumph has plans to increase the capacity to ‘over 750cc’ while expanding the range to four models.

What’s been missing so far is photographic evidence of the new bike’s existence and that’s what these long-range shots finally provide.

We asked Triumph for confirmation but as expected the response was "we do not comment on future models". 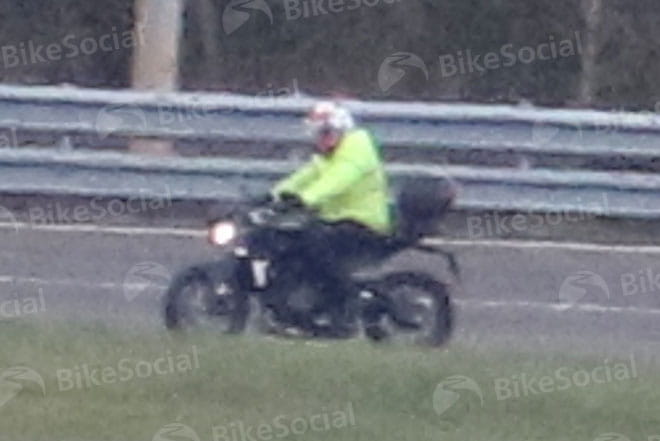 Look closely and you’ll see that this bike, on test inside a private facility in the UK, doesn’t match anything in Triumph’s current range. The double-sided swingarm and lack of under-seat exhausts show that it’s a Street Triple rather than the larger Speed Triple, but that swingarm doesn’t match the one on the existing model. It appears to be much chunkier, with a hefty upper brace that doesn’t feature on the current Street Triple. The shape is closer to the swingarm of the Daytona 675, but it seems that much of the space between the lower and upper sections of the arm has been filled in with a strengthening gusset.

Moving forward, we see that there are bright, metal-finished elements on sides of the radiator. That’s perfectly in keeping with the styling changes made to the larger Speed Triple for 2016, so it makes sense that the Street Triple will follow suit. The lone rear three-quarter shot of the bike also shows that it’s adopted the bar-end mirrors that are a notable feature of the latest Speed Triple.

Although it’s hard to be sure, we’d also expect the new Street Triple to gain mildly updated headlights, in line with the changes to the Speed Triple.

So overall, the look will be new but not radically different to the existing machine – so what is there to get excited about? The answer lies in the near-800cc version of the three-cylinder engine.

Triumph has, of course, already made an 800cc triple derived from the original 675cc lump; it’s used in the Tiger 800. But that isn’t the engine that will appear in the new Street Triple. The Tiger version is tuned for torque rather than power and its capacity hike was achieved via a lengthened stroke, which in turn limits its ability to rev and means its peak power is actually lower than the existing 675cc engine’s.

To get a boost in power, the new Street Triple’s engine – quoted in a leaked Triumph customer survey as being ‘above 750cc’ – will need to reach its larger capacity via a larger bore, keeping the stroke short to retain an ability to reach high revs. 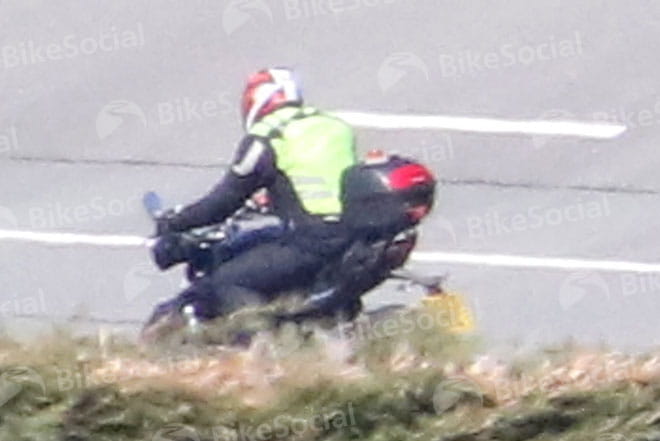 The leaked survey revealed an uncomfortable number of details about the new bike, including the fact that Triumph intends to make a four-model range – adding ‘RT’ and ‘RS’ versions of the Street Triple above the base model and Street Triple R.

All versions will get the new engine, but there are three levels of tune. The base Street Triple will have 110bhp and a projected £7790 price tag, with non-adjustable Kayaba suspension at both ends and axial Nissin brakes. The Street Triple R gets 115bhp, adjustable Showa suspension and Nissin radial calipers for a planned £8790. It also gets flashier instruments with a TFT high-res screen instead of a basic LCD display and three riding modes.

Above that comes the Street Triple RT – a new model with more of a sports-touring intention. Its suspension and brakes will be ‘R’ spec, but the engine is a more powerful 125bhp version of the triple. Importantly it’s also spec’d with a quick-shifter, slipper clutch, bellypan, seat cowl, aux power socket, tyre pressure monitors and a flyscreen, with the option of a half fairing. Price? It’s suggested to be £9790.

Right at the top of the range, the survey suggested that the ‘RS’ version will also get the 125bhp engine, but it will be allied to Ohlins suspension and Brembo radial Monobloc brakes. Extra kit is scheduled to include the quick-shift, slipper clutch and bellypan, plus five riding modes rather than three and a built-in lap timer. It will do without the RT’s touring-oriented parts like the auxiliary power socket, though. The price, according to the leaked survey, is intended to be £10,190.

It’s worth mentioning that the survey was sent out to a selection of potential customers more than a year ago, so all those prices – and indeed some of the specifications – might well have been revised since then. 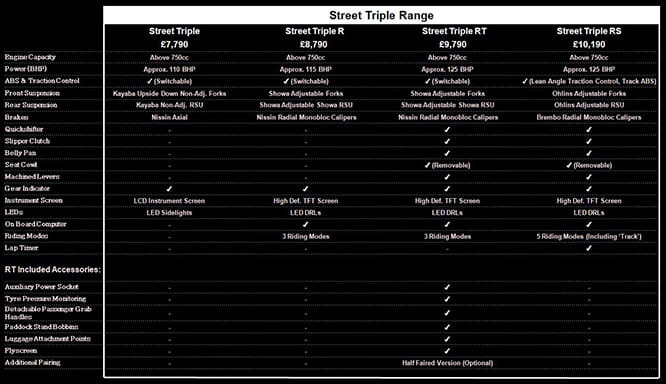