This Friday sees the release of the latest, long overdue and hugely anticipated  instalment of the Mad Max movie series. Apocalyptic road movie Mad Max Fury Road, follows on from the 1979 original ‘Mad Max’, its celebrated 1981 sequel, ‘Mad Max II The Road Warrior’ and the slightly less well-received 1985 Follow up, ‘Mad Max Beyond Thunderdome’, in being an action-drenched, punky, petrol-head chase movie soused in mad-cap cars, bikes and stunts.

This time round, Max is played, not by Mel Gibson, but by Brit Tom Hardy, supported by Charlize Theron and bike-nut Nicholas Hoult. It also sees a return to its roots as a car and bike fest so, to celebrate this, we’ve picked out the 10 best Mad Max motorcycles from the entire series…. 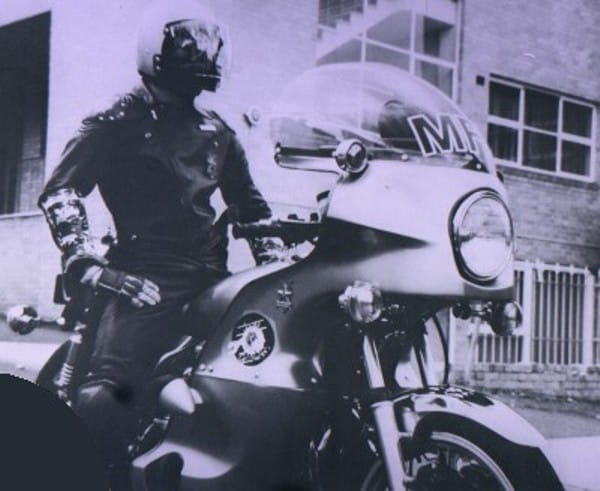 One of the most iconic bikes of the whole Mad Max series came in the original 1979 flick – the MFP (Main Force Patrol) pursuit machine of officer Jim Goose played by Steve Bennetts Biking Services Limitedey. ‘Goose’ is the best friend of lead character Max Rockatansky (played by Mel Gibson). After arresting and beating up ‘Johnny the boy’, sidekick to gang leader ‘Toecutter’, Goose is later brutally attacked. Goose’s bike is actually a 1977 Kawa Z1000 modified with fairings by Melbourne-based La Parisienne, who unfortunately went out of business a few years after the film was released. 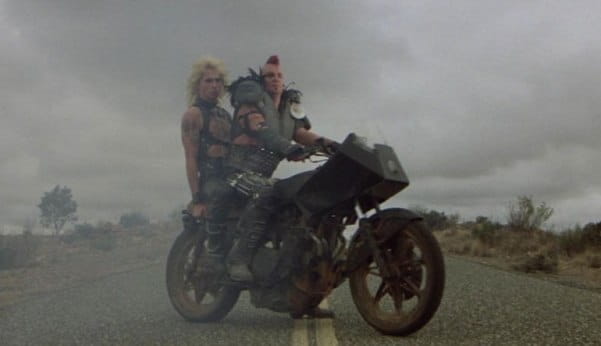 Wez is one of the standout characters in baddie Lord Humungus’s Marauders gang in 1981’s follow-up ‘Mad Max 2: The Road Warrior’. Played by Vernon Wells, Wez is distinguished as much by his bike, a Craig Vetter fairing equipped Z900/1000 as by his Mohawk and riding partner ‘Golden Youth’.

He rode a Kawasaki 900 or 1000 dressed up with a Craig Vetter fairing and was reportedly inspired by the then new Suzuki Katana. The story goes that the production crew couldn’t actually get hold of a Katana, so modified the Kawasaki instead. 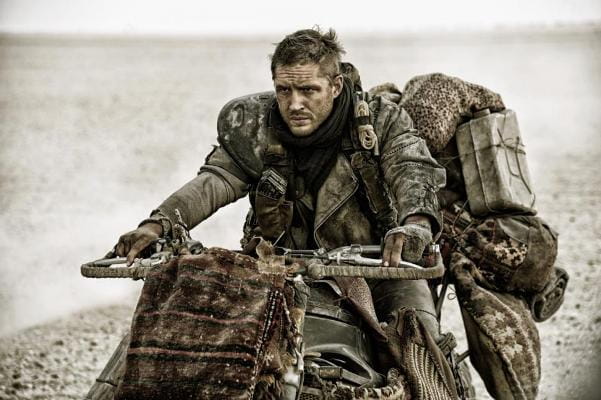 Max doesn’t ride a bike in the first three Mad Max films, being associated most with his modified Ford Falcon police interceptor – but he does, briefly, in Fury Road. 25 years in the making, filmed mostly in the arid deserts of Namibia and featuring, reportedly, 150 bikes and cars conceived by production designer Colin Gibson and built by the Fury Road company, the film is already receiving rave reviews for its action sequences in part due to director George Miller’s insistence on minimal CGI. We don’t know much about the bike but reckon it’s a heavily modified 2007-8 Yam R1. 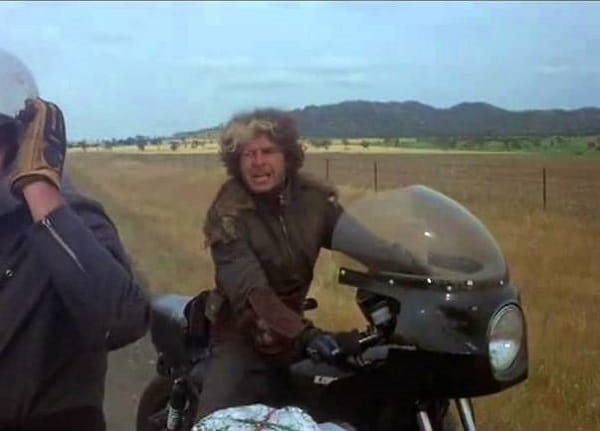 Toecutter (played by Hugh Keays-Bryne, who, interestingly, also plays lead baddie Immortan Joe in Fury Road) is the leader of the outlaw biker gang in the original 1979 Mad Max and rides a black Z1000 with a similar La Parisienne fairing to that of Goose (see above). In fact, La Parisienne reportedly modified a total of 13 bikes for the movie. The gang themselves were played by members of a local Victoria-based motorcycle club. Incidentally, replicas of Goose’s bike were being sold by Japanese company Whitehouse as recently as 2002. 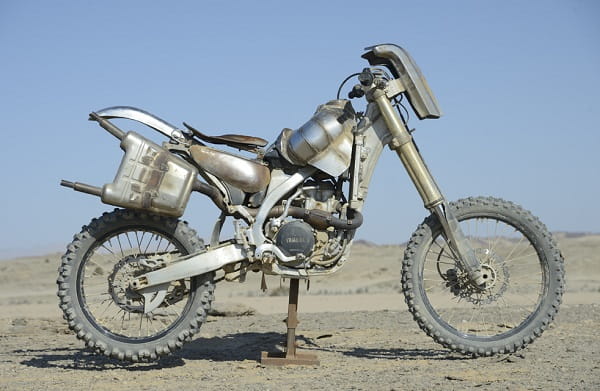 Although overshadowed cars and trucks, bikes do feature prominently in Fury Road. One of the leading gangs are the Rock Riders, whose vehicle of choice are customized dirt bikes, such as this modified Yam YZ, and on which they attack in one of the most dynamic sequences of the movie. To deliver the action, stunt coordinator Guy Norris enlisted five-time Australian MX champ and leading freestyle coach Stephen Gall. Said Norris: “We wanted to create action that’s never been seen before, and Stephen has his fingers on the pulse of all the best motocross racers and freestylers out there. And what his guys did on this film was just above and beyond. It was amazing.” 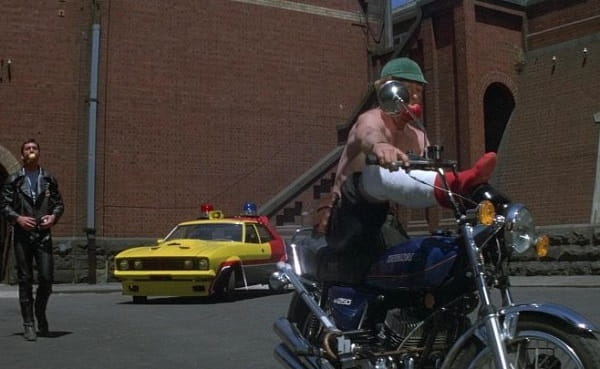 In the original 1979 Mad Max it’s not all Z1000s. Early in the film following an accident, an injured ‘Goose’ is seen using crutches and leg braces and riding away from the police station not on his usual MFP pursuit bike (see 1.) but instead a more lightweight 1976 Kawasaki KH250 two-stroke triple. 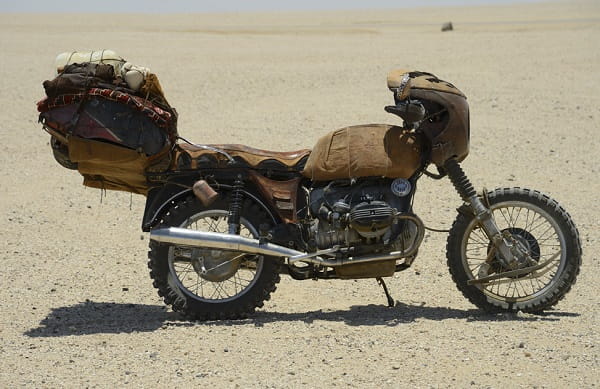 In the Fury Road, bikes are also the vehicle of choice of the Vuvalini, a tribe of older warrior women (led by Megan Gale as ‘The Valkyrie’) who ride into battle on modified bikes to wreak havoc with explosive-tipped spears and guns, as production designer Colin Gibson has explained: “We wrapped some feminine detail and nomadic styling around the leather seat of a repurposed Harley or BMW to give you the last thrill of your last ride before these lovely old bikie chicks took you out with a single shot.” 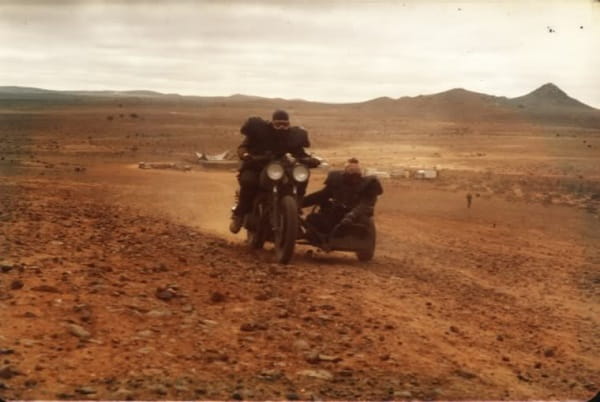 In Mad Max 2, Wez might be more familiar aboard his Katana-esque, Vetter-faired Z1000, but later in the movie he’s also spotted causing carnage as passenger aboard a Yamaha XS1100E sidecar that had been modified to become a standing platform. A props buyer for the film apparently purchased the sidecar from Allan Levinson of Sydney, removed the fiberglass body and fitted a metal platform. 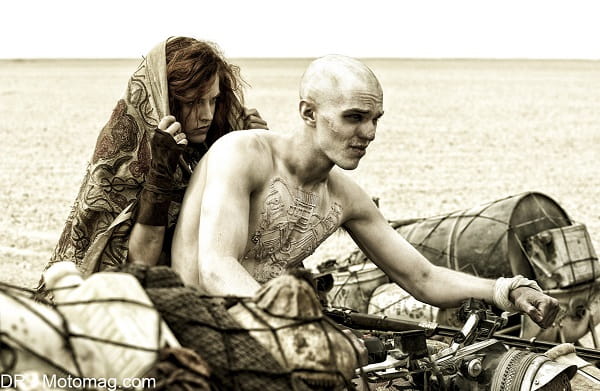 One of the stars of Fury Road is British actor and biker Nicholas Hoult. Most familiar for X-Men and, as a child ‘About a Boy’, Hoult rides a Ducati 899 in the UK and has attended the Ron Haslam Race School. Admittedly, in Fury Road, as shaven-headed psychotic Nux, he’s mostly seen driving his highly customized 1934 Ford Deuce, but bikes feature too. He says of the movie: I’m just elated with the film. George was one of the first people to put a wide lens close to the ground and shoot car chases that way and make you feel the speed and really feel the action. With technology nowadays and new ways of shooting, he’s managed to create an even more exciting, epic movie.”

10. Charlize Theron gets on a bike, too 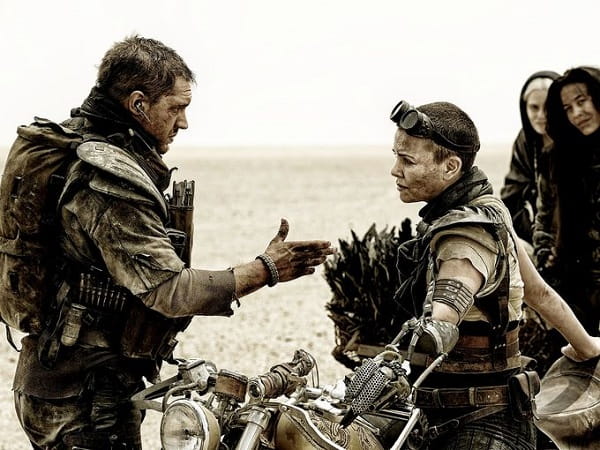 Fury Road may be dubbed a ‘Mad Max’ movie, but to be entirely accurate its heroine is not Max, but Imperator Furiosa, a skin-headed alpha female with a bionic arm played by Charlize Theron. The plot centres on her mission to return to her homeland, crossing a post-apocalyptic desert in an 18-wheel truck, rescuing slave women as she goes. Oh, and she gets on a bike too. What’s not to like?

Will you be watching Mad Max Fury Road this weekend?  or !