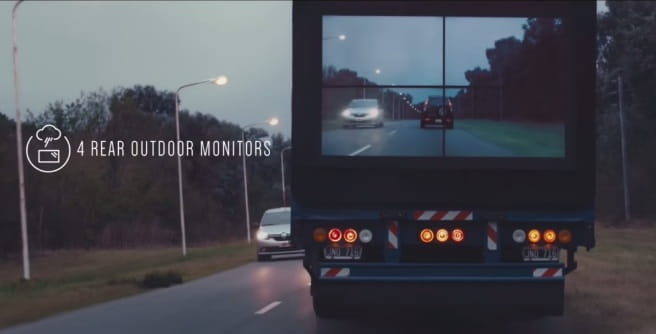 Lorry drivers could soon be assisting cars and bikes to safely overtake by displaying the road ahead as a live feed on their rear doors.

The innovation has been developed on behalf of South Korean technology giant Samsung by the US-based Creative Agency Leo Burnett. It incorporates four display screens mounted on the rear doors of the lorry which project a wireless real-time feed from a forward facing camera positioned in the cab’s grill showing the road ahead and providing following vehicles with enough information to determine if there’s a safe overtake on.

Called the ‘Safety Truck’, a fleet of the firm’s 16-wheelers have been testing in Argentina since statistics revealed that one person dies in the South American country every hour as a result of a traffic accident.

The cameras also have a night vision settings and are ideal for two-way roads in an attempt to reduce road traffic accidents.

The technology won’t come cheap but it could well make our roads safer so it’ll be interesting to see if the prototypes make it into production and onto fleets such as Eddie Stobart. The Government announced increases to speed limits for HGV’s on the UK’s roads effective from 6th April 2015; single carriageways have risen from 40mph to 50mph while the maximum legal speed on duel carriageways is up from 50mph to 60mph.

Would you trust the video feed? To comment on this article  or !