Guy Martin beats a fairy riding an R1. It can only be Dirt Quake! 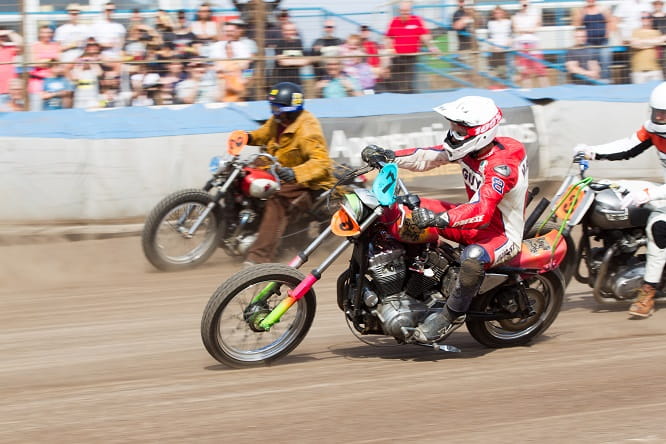 Dirt Quake. It didn't exist and so they invented it. And the thousands that poured into the Adrian Flux Arena in King's Lynn for the two-day festival of dirt, music, motorcycles and mayhem are mighty glad they did.

Dirt Quake, for the uninitiated, offers the chance for anyone and everyone to race pretty much whatever bike they like on the dirt oval of a speedway track. In fact, the less appropriate the bike, the better, as classes such as Inappropriate Road Bike and Chopper make perfectly clear.

Sideburn magazine's brainchild saw its fourth annual incarnation on the 17th and 18th of July. Friday evening saw the serious business of a full round of the Dirt Track Riders Association championship, with full-on flat rack bikes racing on the speedway oval. With a healthy contingent of campers already set-up, ready for the following day's anarchy, there was a healthy crowd to see how pure dirt track racing, on proper race bikes, is done. What wasn't typical for a DTRA meeting were the post-race festivities that carried on into the early hours. The revellers, including a wild French contingent, were fortified by local band The Vitamins, followed by DJ sets playing scorching soul, ska, reggae and garage on vinyl 45s. And by a very late bar.

The next day saw Dirt Quake proper and the anarchy unfolded under clear Norfolk skies. The tone was set by the appearance of the pace car. Not some tarted-up Alfa Mito, but a police car in 1970s duck-egg blue and white livery, though with the highly irregular addition of helmeted beat bobby regaling the crowd from the open sunroof. 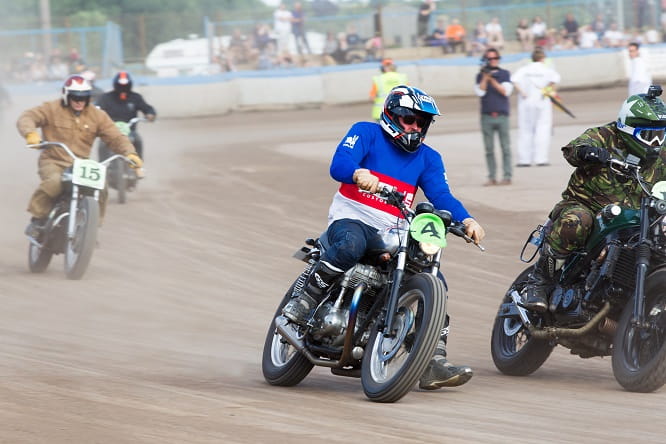 The afternoon then dissolved into a smorgasbord of off-beat two-wheeled psychedelia as an unlikely and often absurd mixture of bikes and riders took to the shale oval, riders that included Guy Martin and Charley Boorman, backed by live band Dream Themes belting out covers of familiar TV shows, of course. Sportsnight, anyone? Honour was defended, pride was bruised (and a few bodies, too, though only one overnight hospital stay was pretty good going), and the packed grandstand was treated to a memorable, often hilarious spectacle, not least that of an on-it Guy Martin caning an unwieldy mongrel to first place in the Chopper final. In fact Guy won both the W&W Harley class and the Chopper class on the Harley-Davidson Sportster built by Krazy Horse, Bury St Edmunds. 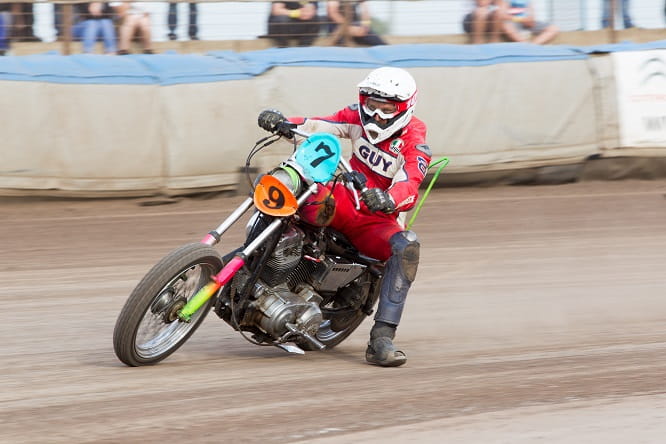 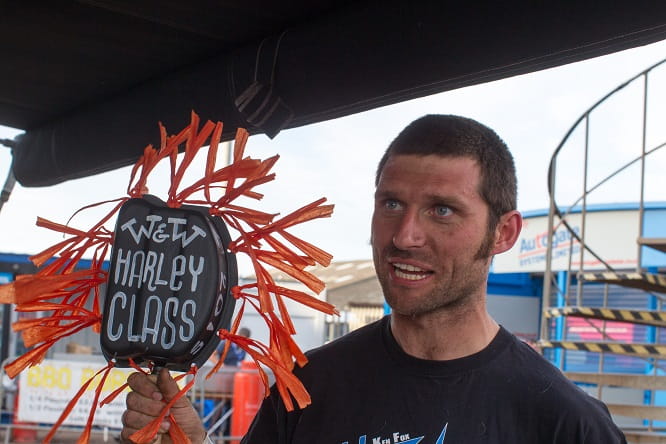 It was thanks to Guy that this year Dirt Quake was lucky to be able to host the Ken Fox Wall of Death with free shows throughout the day and evening. Cool and calm punters filed up the steel steps to the top of the tented drum; gabbling, grinning, gesticulating loons spilled out again half an hour later. Look it up, it's a show not to be missed.

With trophies presented as the sun began to set over the eastern flatlands, it might be easy to think that happy punters would wend their way home, but a mysterious power held them back. Davros and the Deep Space Deviants plied their evil trade with scorching, twisted interstellar rock that had a policeman stripped to his pants (well, he said he was a policeman) and those French again out-freaking the freaks. Late bar, DJs, revelry. You know the score.

So, Dirt Quake. It didn't exist, so Sideburn magazine invented it. Warning, aftershocks may still be felt. 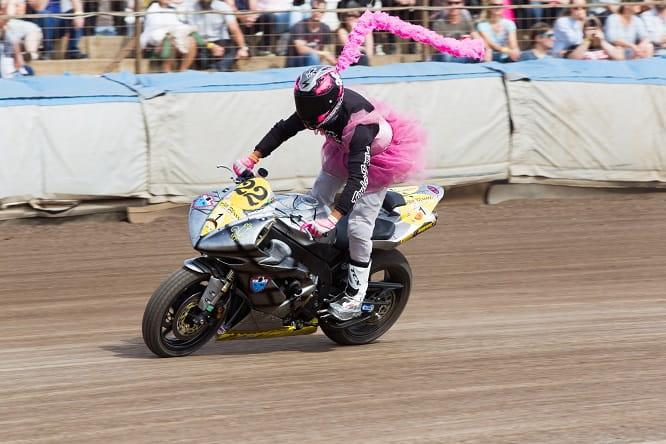 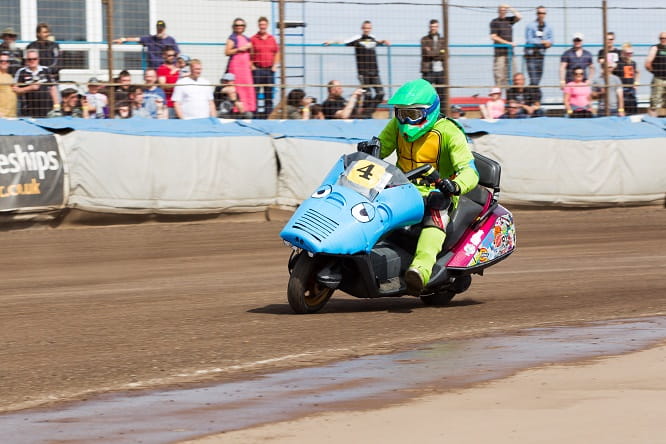 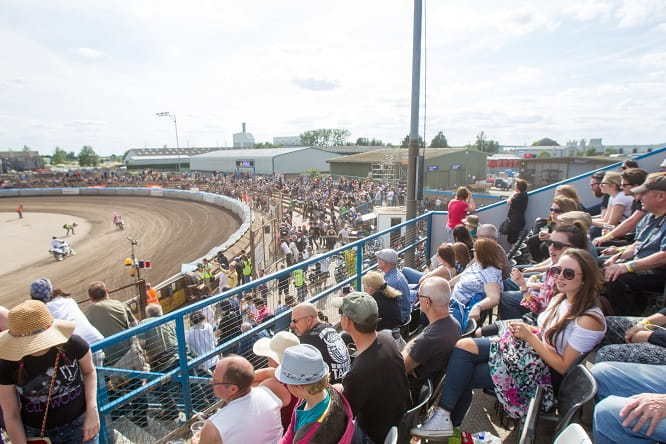 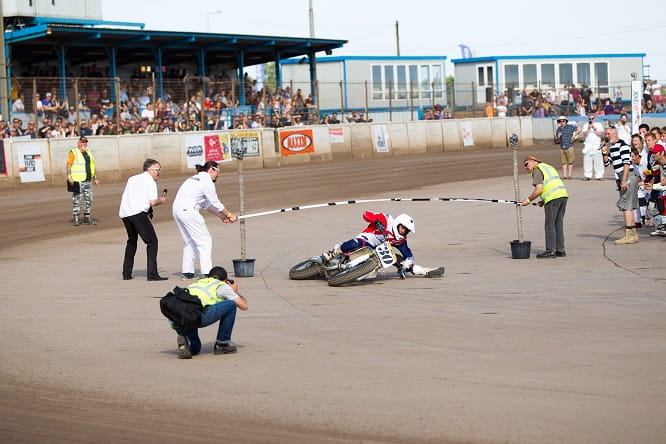 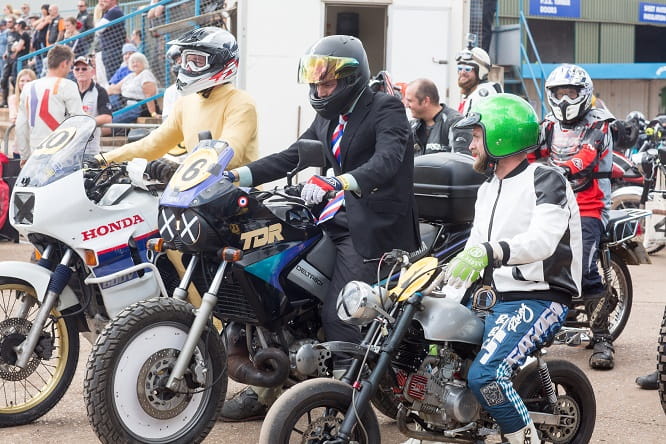 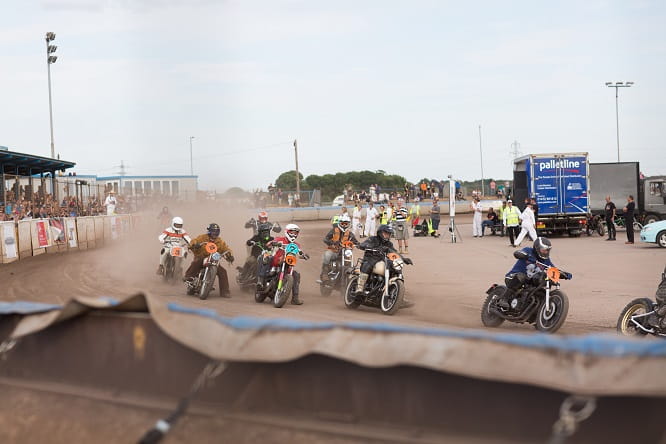 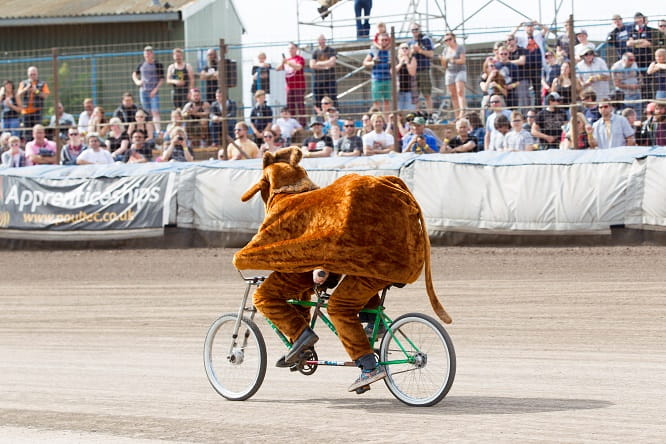 Signing up for next year?  or !