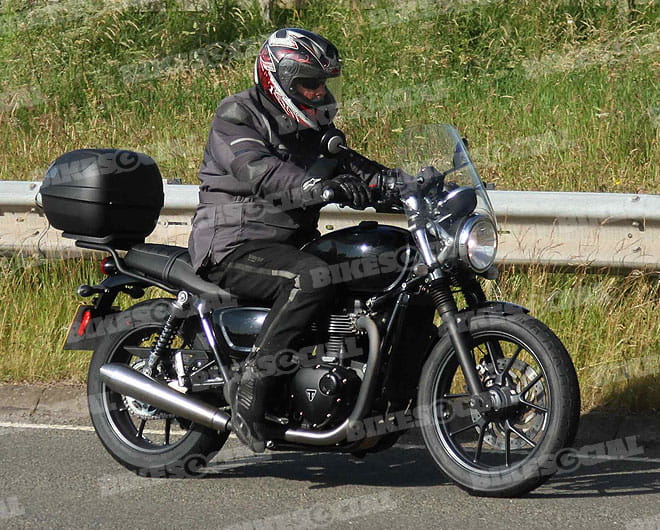 This is the first glimpse of the entry-level version of Triumph’s all-new water-cooled Bonneville, which will go head-to-head with bikes like Ducati’s Scrambler when it’s introduced next year as a 2017 model.

While the new Bonneville has already been spied in several guises, this is the first time we’ve seen the base model that’s likely to be the biggest seller of them all.

Still clearly a retro-inspired machine, it doesn’t slavishly follow the details of original 1960s or 1970s Bonnevilles; that role will be filled by the higher-spec T100 model, which has been spied already and gets period-style wire wheels, accurate replica bodywork and a higher-performance version of the new engine. Instead, the base model provides a link to the past but is intended to be a blank canvas to allow owners to accessorise or modify to their own tastes.

Starting with the technical changes, we can see that the entry-level bike gets alloy wheels instead of wires, with a modern-looking 10-spoke design. There’s also a single front brake disc – the T100 model gets twin discs – which hints that there may also be a reduction in power compared to some higher-spec models. As on all 2017 bikes, ABS is standard.

That impression is backed up by the fact this bike has a smaller radiator than the T100. While the engine looks otherwise identical, a smaller rad suggests it’s creating less heat, either due to a lower state of tune or thanks to a reduced capacity. While there’s been no official confirmation, rumours suggest that some versions of the new Bonneville will be close to 1100cc, while this bike might be nearer the current model’s 865cc. Triumph is believed to bee working on several versions of the new engine; the Bonneville-style bikes will use traditional 180-degree crankshafts while the cruiser variants like the recently-spied bobber will use a 270-degree crank that replicates the firing intervals of a 90-degree V-twin. 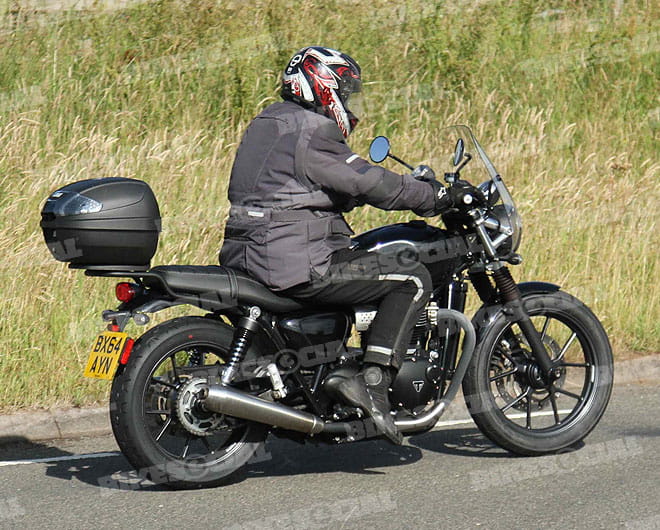 Moving rearward, the seat is lower than the T100s and the side panels below it have a different shape, while right at the back the mudguard is cut off higher. The exhaust is also quite different, with a more conventional pair of silencers than the T100’s pea-shooter set-up. As on all other versions of the Bonnie spied so far, the exhaust system cleverly hides the catalytic converter under the front part of the engine while dummy covers – clearly visible here thanks to their polished finish – give the impression that the pipes sweep straight back from the headers to the silencers.

As far as kit is concerned, the bike seen here is stripped back to the minimum, with a single speedo rather than the twin clocks of the T100.

Triumph has recently been spotted benchmarking Ducati’s new Scrambler, which is one of this bike’s key rivals. While there will eventually be a new Bonneville Scrambler as well, this entry-level version is really the closest rival to the hugely successful Italian machine, since it will be offered with a vast array of options. This prototype already sports one of them in the form of the clear Perspex windscreen.