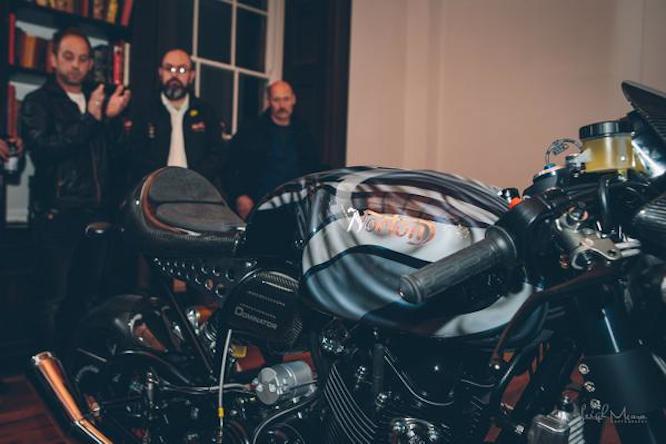 Norton lifted the cover off two all-new models at Donington Hall on Saturday night, including the marque’s first production model since the Commando was launched in 2010.

Based on the almost instantly sold-out, limited edition Domiracer unveiled by the British marque in 2013, the Dominator bears a striking resemblance to its prototype sibling.

“The Domiracer was so ridiculously handmade,” explained Norton’s Head of Design, Simon Skinner. “Even with all the resource we have, we were only able to produce three or four a week as they are just so labour intensive.”

“It was so popular we just had to do something more with it. We felt it was important to retain the stance and overall style of the bike but have taken off some of the detail and jewellery to make the Dominator more production friendly.” 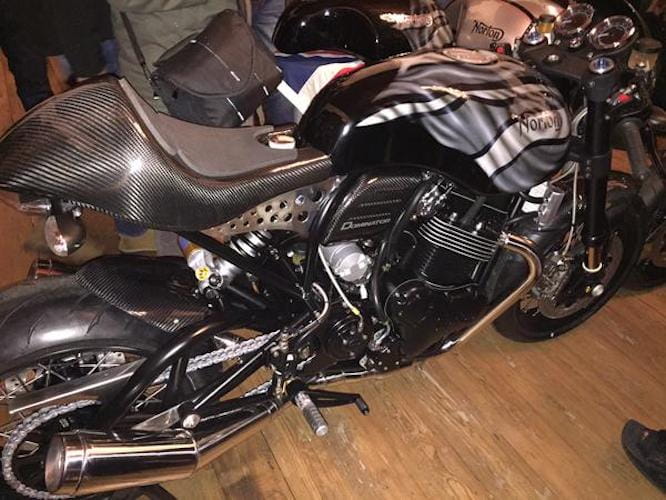 One piece of ‘jewellery’ not featured on the Dominator is the hand-built, aluminium-brushed tank. Instead the new bike gets a rotation moulded-painted tank available in four colour options including the lavish, hand-painted Union Jack shown in pictures.

Powered by the same 961cc twin cylinder motor found in the rest of Norton’s range, the Dominator will feature full Ohlins suspension and brembo monobloc calipers as standard.

The straight-through pipes of the Domiracer have been replaced with a road legal, emissions friendly exhaust system developed by Norton especially for this bike.

Norton will also release a limited run of 50 special versions of the Dominator, the SS, after seeing a demand for limited edition models from the success of the Domiracer. The SS is essentially a road-prepared Domiracer, featuring the stunning aluminium-brushed tank and incredible sounding straight through pipes as standard. 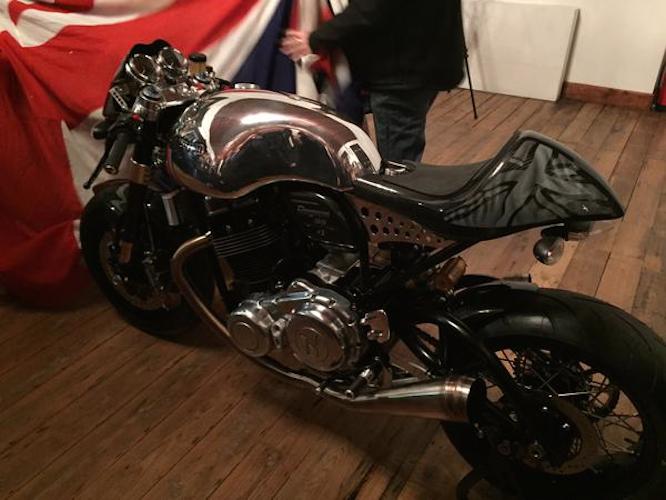 “This is not a replication of the Domiracer but an extension,” Norton’s CEO, Stuart Garner told Bike Social. “The plan was always to increase our model range and I’m really pleased to have lifted the covers off the Dominator and Dominator SS.

“The Domiracer was so popular, even after it sold out we had so many people getting in touch looking for one. We’ve taken things up a notch with this bike, it’s much more refined.

“We’re releasing the SS because there is clearly a demand for exclusive, special editions. We’d already had significant interest in this bike before the launch and I’m confident all 50 will be snapped up soon!”

Norton are taking orders for the standard, production-run Dominator at £19,950 with the limited edition SS priced at £24,000.

The first bikes are expected to roll off the production line in April.