If you’ve ever sat on the sofa watching World Superbikes and thought ‘I could do that’ it's fair to say you probably can't. Don't worry, we all get to that realisation at some point, unless you're currently on the grid of SBK/BSB/MotoGP, or similar.

We got the chance to ride with Voltcom Crescent Suzuki SBK star Alex Lowes on the National Circuit at Silverstone yesterday, where Lowes gave us a lesson in next level riding by sticking a standard Suzuki GSX-R1000 sideways on the exit of Stowe - at about 100-ish mph! You can see from the video that it starts sliding at about 90mph and then builds speed rapidly.

He was on a standard bike, with standard settings, and standard Bridgestone tyres. All the GSX-R1000 had extra was a Yoshi end-can on it and a MotoGP paint scheme available on the 2015 MotoGP edition. We were sat behind him on an identical GSX-R. 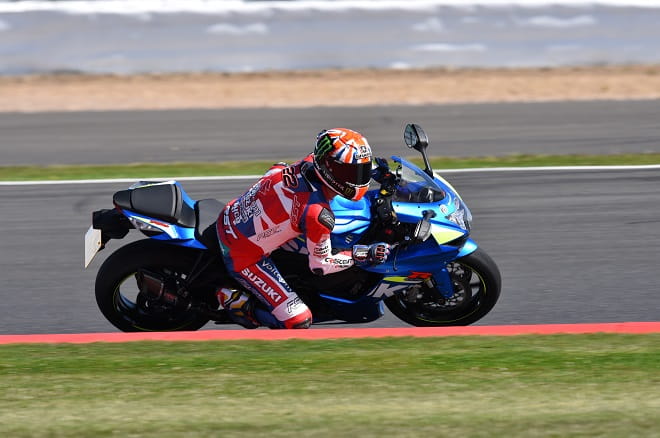 Excitable Lowes, fresh back from his impressive performance at the Suzuka Eight-Hour where he lead the opening session was riding as Suzuki's guest at Silverstone.

He said to get the bike sideways he has to lower his mid-corner speed at Stowe a bit so he can use second gear for the corner (instead of 3rd), picks it up then gets on the gas hard until it’s fully sideways on the lockstops. He said the thing was so sideways there was no more steering lock left!

With a Drift Stealth camera on my shoulder, I followed him for a few laps on a GSX-R1000. Watching him from the handlebars of my bike as he stuck it sideways leaving a massive black line is one of the most impressive things I’ve ever seen anyone do on a road bike in front of me. He did it repeatedly all day too, the nutter!

Apologies that our video isn'’t great quality, but we thought you’d want to see it anyway.

Cheers to Suzuki GB for having us along, and to Alex Lowes for the riding lesson.