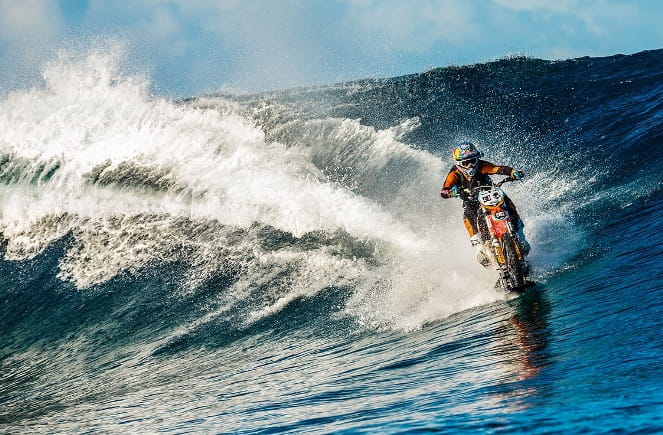 "Something clicked in my head. I fantasised putting skis on a bike and riding on water,” said Robbie Maddison. “It was a stupid vision at the time, but I kept toying with it, playing with designs and concepts, and eventually it became a reality."

The 34-year old Australian stunt rider and one the world’s most recognisable and very best freestyle motocrossers has now managed to surf his KTM.

In a stunning video which has already had over 2 million views in its first 24 hours, Maddison takes to the water in Tahiti dressed head to toe in his motocross outfit, as the culmination of a three year project to make surfing on his motorbike a reality. All to promote DC Shoes.

The project is known as ‘Pipe Dream’ and sees the KTM modified with a split ski around the front tyre fixed to the spindle and a longer rear ski bolted both to the chassis and rear axle. The rear tyre features accentuated propeller-style fins to disperse the water. Maddison has been a keen surfer since childhood and told Surfer Magazine that seeing his wife on a wakeboard was the inspiration behind his idea.

During the same interview, Maddison spoke of the difficulties he faced, “The thing that sticks with me the most after that whole experience was how physically demanding it was. Honestly, I really thought that getting the right wave would have been easier [Laughs]. I don’t think the photos or video show how physical it was. You can’t see that when the wave broke right behind me, I honestly thought that might be the end of my life.” 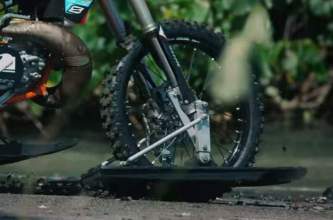 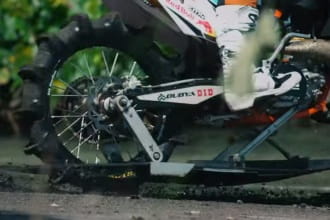 It’s not the first time we’ve seen a bike on water though. Just last year Britain’s own Guy Martin took a modified Suzuki RMX450Z and tested Sir Isaac Newton’s Third Law of Motion by skiing on his bike across Bala Lake in Snowdonia for the Channel 4 show, ‘Speed’.

Maddison however is not afraid of testing his own limits. In Melbourne, Australia in 2008, he set the World Record for the Longest Motorcycle Jump. On his 3rd attempt he landed a jump of 106.98m (350.98 feet). He’s also played Daniel Craig’s stunt double as James Bond in Skyfall , backflipped over an open Tower Bridge in London and ridden down the Olympic ski jump ramp in Salt Lake City.

Pretty hard to believe, right?!  or