How many motorcycles get stolen from racetracks? 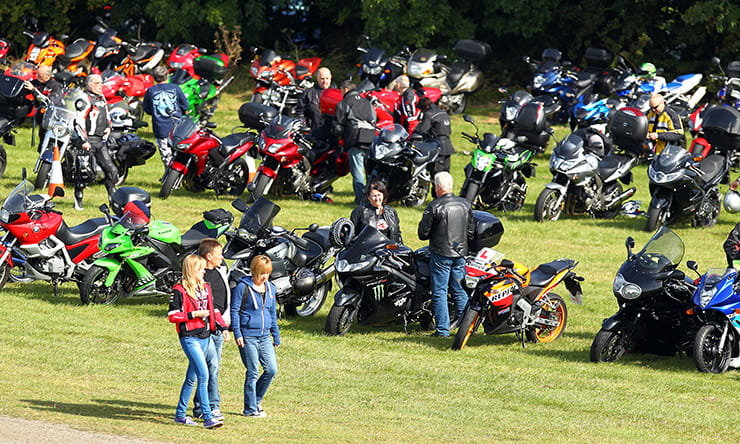 Many road riders, racers and track-day riders take their bikes and gear to some of the best racetracks in the world; right here in the UK. But how safe are those motorcycles, leathers and helmets while they’re there?

When Peter Hickman had his leathers stolen while racing at Thruxton in 2019, it hit the headlines. And rightly so. I worked with Peter earlier in the year when he gave up his time for free to promote an anti-theft message in German, Spanish and French; it allowed overseas visitors to the TT to be aware of the risk of theft while on their way to the Isle of Man. It was therefore particularly galling that someone had stolen his kit from the paddock. What’s the thief going to do with them? They can’t show them off and unless they’re a good size match for Peter, they can’t wear them. And if even they are, they could only wear them around the house. Plain stupidity. 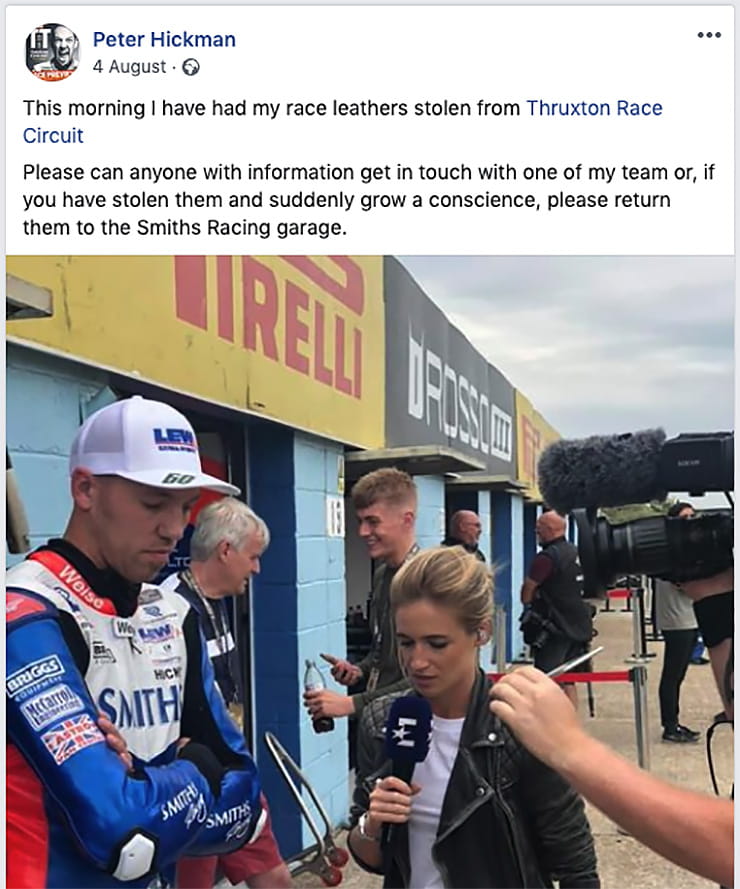 Chrissy Rouse had his paddock bike stolen overnight from Brands Hatch at the final round of 2019’s BSB; it was reported that there were four youths running it up and down the main road outside Brands hatch and that it was later found burnt out nearby. Again, senseless. The scooter stood Chrissy at around £700 as it wasn’t insured 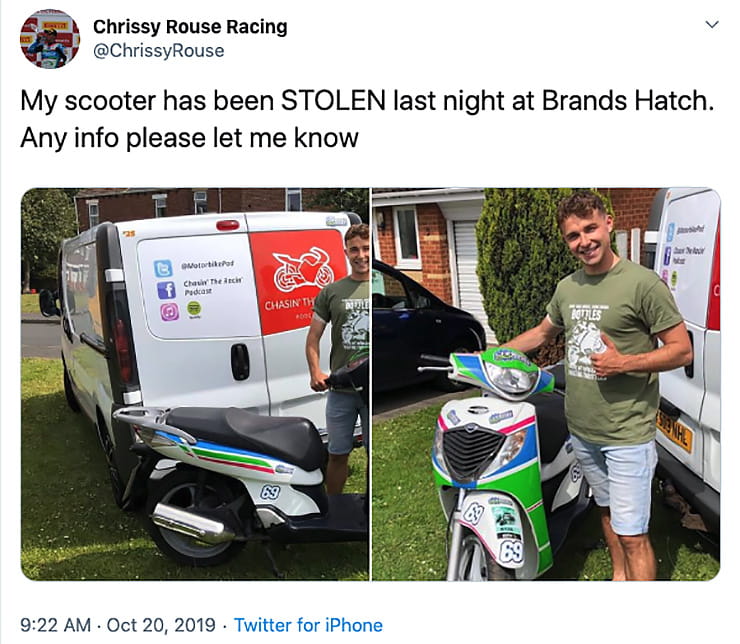 But what if you’re not famous and therefore not as likely to make the news? Searching the internet, I found that two race bikes – a Yamaha R1 and a Honda Fireblade – had been stolen overnight from Brands in March this year, and in October both a Yamaha R6 and R1 – along with a Honda SP1 – had all been taken while the riders were at a track day briefings at Oulton Park. They had been loaded into a cloned van and the offenders had simply driven out of the circuit.

Here’s the thing though; my initial internet searching was throwing up stories of thefts from as far back as 2012 and to be blunt, that has little bearing today. It skews the real picture as gets retweeted and shared a thousand times.

What it does do is plant a seed. A post might be old, very old, by the time it gets read. And shared again. There’s no point at which social media stops regurgitating the same news. It can fuel a perception that bike crime and theft is rife at racetracks in the UK, so is it?

Of course, searching the internet isn’t a very robust way of producing crime figures so I asked 11 Police Forces – the ones that cover the major tracks in the UK – for their figures. I specifically asked two questions of offences that listed a race circuit as the offence location:

2. How many thefts of motor vehicles were recorded in 2019?

I only chose January to November 2019 as the timeframe as it would mean the figures were accurate. I asked that only offences that occurred at a specific location were returned to me as that’s how the police record crime. If you live in Lancashire for instance, but your bike is stolen in Leicestershire, it will be listed as a crime in Leicestershire, even if you reported it when you got back home. It means that police forces can react to emerging crime patterns in their area.

Of the 11 police forces I asked, only Lincolnshire – which covers Cadwell Park – didn’t reply in time to satisfy the freedom of information request. At first there were some alarming figures, but Leicestershire police covered their figures in fairly good detail.

There are a couple of things to note from that table; the three Oulton Park bikes don’t show – it might be they just haven’t hit Cheshire Police’s figures yet as the original FOI request was very close to them being stolen, but we can safely add a three onto that number.

Secondly, look at the high figure for thefts at Donington. As if to pre-empt my question,  Leicestershire Police kindly told me that 71 of those 92 thefts occurred at just one music festival – the Download Festival.

It is important that you report thefts to the police as it helps them to plan and they shouldn’t ignore an emerging problem. Northamptonshire police arrested a wanted driver as part of an ANPR (automatic number plate recognition) operation in the run up to the MotoGP meeting at Silverstone – he was driving a car on false registration plates that the ANPR system spotted. A tactic that could have helped in the Oulton Park theft.

No doubt, like all crime, there has been some under-reporting, and you may know of instances that aren’t covered here. If that’s the case then they might not have been reported to the police, and the way forces work means that if there isn’t an emerging pattern, they won’t look.

So, the figures provided by the police show that there were five thefts of vehicles from racetracks across the UK (eight including the extra three we know of from Oulton Park) and 66 other thefts. That’s from all the major tracks and covers every event they hold, from bike and car trackdays to race meetings and whatever other events they hold throughout the year.

Put it another way and the combined figure for all those tracks – 66 – is still less than only one music festival. None of this matters though if it was your property that was stolen and everyone should take steps to secure bikes and property when visiting race circuits, just like you would anywhere else. A simple disc lock would significantly reduce the chances of your bike being taken, or better still, chain two bikes together. At race meets park your bike as you would anywhere else. At track days, be mindful that there are lots of vans moving around that won’t usually raise suspicion. Just don’t forget to remove your lock in the excitement as your session is called!

So, how safe is your property when visiting racetracks? Well, as is so often the case, the numbers don’t add up to the social media hype. Even simple security makes a big difference, so buy the best you can afford, use it, then get on with enjoying biking! You can find advice on the best security kit here.