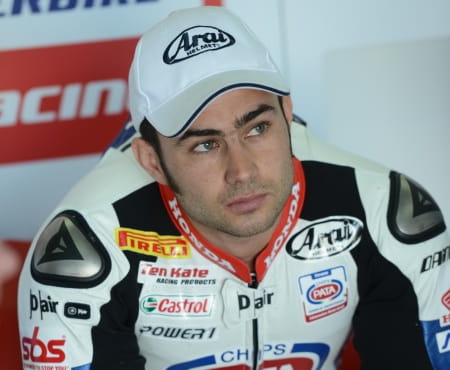 After suffering a major break to his leg in Assen, it looked as though Leon Haslam would see another miserable season through nothing but bad luck. Despite several attempts to return to the track, it wasn't until a month ago in Imola that Haslam finished a race since breaking his leg. A crash in Moscow while fighting for the podium dampened spirits a little, however this past weekend saw Haslam achieve a historic feat as he became the first ever Englishman to win the Suzuka 8 hour endurance race. We caught up with him for a quick chat when he landed back in the UK...

You've had quite a challenging season so far but it's started to look up for you over the past month and you've just won at the Suzuka 8hr - How does that feel?

Yeah, it's a dream come true, the eight hour is one of the races that everyone wants to win and Johnny won it as the first British guy last year and I was told yesterday that I'm the first English guy to ever win it so I'm over the moon! It's a big honour to even do it so to win it is great, it's one of those things you've always wanted to tick off your list. I'm really happy, I was a bit worried about the leg so most of the weekend I was concentrating on doing long runs and focussing on set up and we left it to the other guys for the one lap attack stuff but over the weekend we got faster and were consistent and it worked out perfectly in the end.

How was the race on your leg? Endurance must be exhausting!

Suzuka is tough because of the humidity and the heat, it's a physical lap - over 2 minutes 10 a lap so it is very hard work. It's something I've been working up towards and I think that doing the riding is actually helping me improve. The bone is pretty good now but all the muscles and ligaments are still quite damaged so for sure, after the first stint I didn't think I'd be able to do much more but when Michael had to pull out through fatigue it kind of made me go again and we got the job done.

How different is the Honda CBR1000 you rode at Suzuka compared to the Superbike you ride in the World Championship?

The Suzuka bike is quite basic, there's a lot less power to make the fuel consumption better. There are none of the electronic aids that we have in World Superbike, so it's quite a step down. The biggest thing for me was the tyres, it was my first time using Bridgestones but everything else was a bit easier.

It's Silverstone World Superbike this weekend. How do you feel ahead of it after your Suzuka success?

We feel good ahead of Silverstone. It's been a busy month, going from Imola which was the first race that I've finished since breaking the leg to four days of testing at Suzuka and straight from there to Moscow where I crashed in Race 1 battling with Eugene and Johnny for the podium. Then it was straight back to Suzuka for the race so this will be the fourth or fifth weekend in a row of riding. It's been a good test on the leg and I'm feeling a bit sore and achy now but come Friday we'll be back on it.

When are you looking to be back to full fitness?

Honestly, I don't think I'll be back to full fitness until next year. I've got to have another operation straight after Silverstone and another one in December to re-attach the ligaments. One thing is getting it back to full fitness, but it's all the other bits and bobs that take the time. I think I'll be able to ride the bike how I want to ride it within a month and once I can ride it how I want I think the strength and everything else will come back twice as fast.

With that in mind, what are your aims for the rest of the season?

I just want to get back to where I know we can be, in Australia we had the pace for podiums. I know that with the Honda I can run podium pace and that's where I want to get back to before the end of the season. Obviously we're going to give it a pretty good go at my home round, after missing Donington this is the only time I get to race in England so we'll give it a good shot! After Silverstone we've got four weeks off before Germany so that will be a good break to keep improving the fitness.

Have you had any thoughts about next year?

I've got an option with Honda, contractually. That will hopefully sort itself out over the next month. We've had some interest from other people but to be honest, with my injury this year it's not been a year of moves. Last year I had a broken leg, and collarbone, this year I've broken my leg I've had a tough couple of years as far as results go which a lot of people look at. Finishing second in 2010 seems like a decade ago! For me it's about getting back to where I need to be and getting back on the podium!