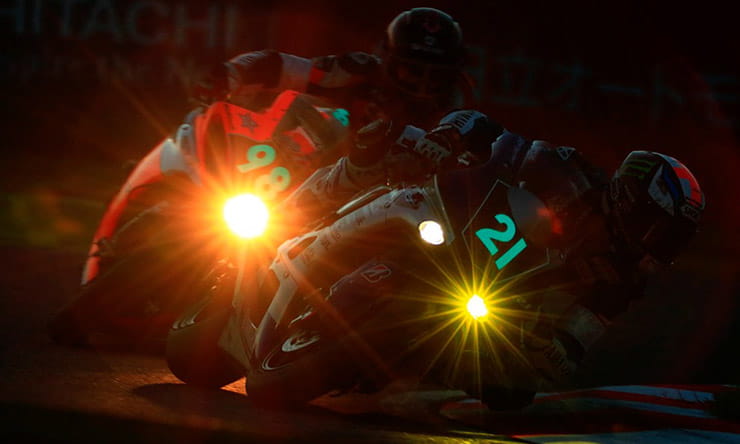 This weekend it’s time for the legendary, annual, Suzuka 8-hour which although, on face value, just another round of the FIM Endurance World Championship is actually far, far more than that – in fact it’s arguably the biggest, most important race on the planet.

The first Suzuka 8-hour was held in July 1978, originally for F1 prototypes, and was quickly given huge importance by the Big Four Japanese manufacturers for being an opportunity to show off their engineering skills.

Because of that significance, Suzuka has traditionally held a date which didn’t clash with any other championship and as a result of both of those factors, for many years Suzuka not just featured the world’s most extreme and extravagant F1 and superbike-style machines, but also each factory’s star riders from not just F1, endurance and domestic superbike racing but Grand Prix too.

Its popularity peaked in the mid-to-late 1980s when the likes of Wayne Gardner would team up with Mick Doohan to take on local and world superbike stars aboard the most exotic superbikes ever seen, all in front of crowds in excess of 130,000. It’s still a unique event, even though today the bikes may now conform to world endurance regulations. Suzuka is still the only race where MotoGP stars compete with riders from world superbikes, endurance and Japanese national racing. Last year’s race saw Casey Stoner step out of retirement to race for the factory Honda squad (crashing out spectacularly due to a mechanical fault), while the race was won by British MotoGP star Bradley Smith, with Tech3 team mate Pol Espargaro and local hero Katsuyuki Nakasuga aboard a factory prepared YZF-R1. This year, Alex Lowes and Leon Haslam are taking part, for factory Yamaha and Kawasaki squads respectively, while other well known faces include Londoner Gino Rea, Bennetts Suzuki rider Ryuichi Kiyonari and 2015 British superbike champ Josh Brookes.

And while early Suzukas held an air of mystique around them, documented only in glossy magazine features, these days the race is broadcast live on Eurosport. Wanna know why you should get up early and devote eight hours of your Sunday to the race? Here are just 10 reasons...

1. It’s the biggest race in Japan, if not the world

Historically, Suzuka is the most prestigious and biggest race in Japan due to its origins in 1978 as an eight-hour endurance race for F1 prototypes, which quickly resulted in the Big Four Japanese factories bidding for glory with the most exotic F1 four-strokes they could build ridden by their best factory riders from F1, endurance and even grand prix. During its ‘80s heyday Suzuka regularly drew crowds in excess of 130,000 with a record of 160,000 in 1990. Now a part of the FIM Endurance Series, Suzuka is a little less exotic and glamourous with fewer GP stars but is still, arguably, the biggest single race in Japan – if not the world.

Suzuka’s unique. Nowhere else do you see stars from MotoGP taking on their opposite number from world superbikes or endurance. In 1986 Wayne Gardner teamed with Dominique Sarron aboard an uber-trick RVF750 to win. In 1990 it was Eddie Lawson and Tadahiko Taira aboard an exquisite YZF750 and in 2001 Valentino Rossi (pictured) paired Colin Edwards aboard a works SP-1 in Cabin livery to victory. That simply doesn’t happen anywhere else. Admittedly, GP star involvement has since dwindled, but Bradley Smith won in 2015 and this year sees Pol Espargaro once again spearheading Yamaha’s factory effort. Among this year's stars are former MotoGP world champion Nicky Hayden, Michael van der Mark and Swiss Moto2 racer Dominique Aegerter.

3. British riders take on the best – and win

British racers have been competing at Suzuka, going back almost to the first event in 1978. Indeed British have won the event for the past four years – namely Bradley Smith (pictured, along with Pol Espargaro and Katsuyuki Nakasuga) last year; Leon Haslam (along with Michael Van Der Mark and Takumi Takahashi) aboard a factory ‘Blade in both 2014 and 2013 and Jonathan Rea (with Tadayuki Okada and Kousuke Akiyoshi) aboard a similar machine a year previously. Alex Lowes will be one of the favourites this year, taking the factory R1 seat in Bradley’s place, while Haslam is also mounted on a competitive ZX-10R.

4. The best production-derived racing bikes anywhere
Although the machinery on show may now be less exotic than they once were under F1 regs, Suzuka’s bikes are still exquisite. They’re anything but run-of-the-mill 24-hour endurance spec bikes. Being an eight-hour event makes Suzuka a comparative sprint compared to most endurance events with greater emphasis on performance that brings and the leading factory bikes are true ‘specials’ – one-offs built directly by Honda, Yamaha, Suzuki and Kawasaki, specifically designed to win Japan's most important race.

5. We might even see an all-new Fireblade
The significance of Suzuka to the Big Four Japanese factories, but in particular to Honda, who own the Suzuka circuit and treat the event as their own personal corporate party (it’s no coincidence that Honda has won 27 of the 33 races run thus far – it’s THAT important to them) means that Big H also occasionally uses the event to unveil forthcoming new models. Famously, Suzuka marshals demonstrated Honda’s all-new NR750 in 1990, over a year before it was officially unveiled. Honda repeated the feat in 1993 with the first RC45. Who’s to say Honda’s hotly-anticipated, all-new, 2017 Fireblade won’t debut this weekend?

And we’re not just talking about the bikes, not just the riders – but the weather as well! The Suzuka 8-hour is traditionally held on either the last weekend in July or the first weekend in August – in other words right in the middle of the Japanese summer. As a result it’s very hot and stiflingly humid with riders turning to extreme measure to keep themselves cool. Extremely thin, vented leathers are the norm, as are air-conditioning-equipped pit boxes, fans to dry and cool leathers in-between stints and even ice baths!

7. … and very trick
Suzuka’s bikes may now be based on production machines but that doesn’t limit the ingenuity, inventiveness and sheer ‘trickness’ appeal of the leading factory machines. For example, as Suzuka bikes need lights as the final hour, when the race is run in darkness, it was at Suzuka that LED headlights were first debuted on motorcycles thanks to their combination of bright light and light (sic) weight. By the same token, and also to ease spectator identification and fan participation, Suzuka was the first event to see machines with illuminated number boards.

8. It’s the best of 24-hour racing in one bite-size hit stuff

OK, so Suzuka may ‘only’ be an eight-hour event, but it wants for nothing with all of the thrills and spills of a full-blown, 24-hour endurance race, just in a far more easily watchable package. So, the race starts with a ‘proper’ Le Mans running start at 11.30am; there are plenty (usually seven plus per team) rider changes and pit stops during the race and then, for the final hour, the racing take place in the dark under headlamps and floodlights. There's even a traditional funfair for fans. In short: Suzuka’s got it all.

Being Japan’s most important motorcycle race, that’s televised live means the Suzuka eight-hour also attracts all kinds of sponsors you won’t have seen before. First, historically at least, there have been ones like Japan’s Cabin cigarettes who also briefly made it into grand prix, most notably with Brit Rob McElnea. Weirder still to western eyes are domestic Japanese brands such as Cup Noodle, Tech 21 (and who can forget to gorgeous Tech 21 liveried Yamahas of Taira and Lawson?) not to mention enticingly-named soft drinks brand Pocari Sweat! And, of course, they're all promoted by suitably attired local brolly girls.

OK, so it’s certainly true that the variety and exotica levels of the machines competing in the Suzuka eight-hour are nowhere near as wild and extravagant as they have been in the past. In fact, it’s part of Suzuka legend that the bigger Japanese tuning shops would enter the event with ever more extreme and unlikely machines, one of the most memorable of these being Over Racing’s MT-01-based racer (pictured) from 2004-5 (it sadly failed to qualify on both occasions). But even so, there’s plenty of extravagant variety. It’ll be particularly interesting to see how Flex Racing’s KTM RC8R goes this year…