Inside the British Motorcycle Industry: Avon 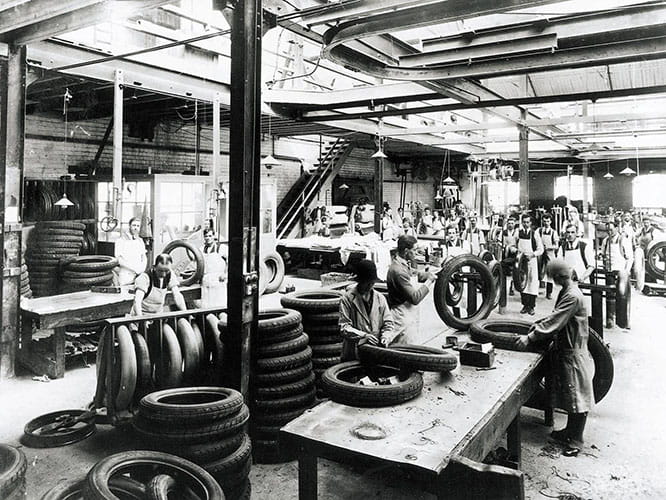 As a bike nut and an enthusiast for British manufacturing, I witnessed something special a short time ago. In the morning I walked out of the Avon Tyres factory gates in the Wilshire Market town of Melksham. Behind me was the listed building where the workforce produce almost every Avon motorcycle tyre made, apart from the Streetrunner and scooter range, which are made in Slovenia and Thailand respectively. Ahead of me was a 12 mile ride on my newly acquired KTM RC8R to the Castle Coombe circuit where a number of racers were spending the day testing some of those very tyres.

The racers were three time Sidecar TT winners and 2009 World Champions, Tom and Ben Birchall – watch out for them at the TT, and in the Sidecar World Championship; roads specialist Dan Cooper who will be campaigning a BMW S10000RR, a Triumph 675 and a Kawasaki ER6 at the North West 200, The Ulster GP and the IoM TT, and finally, returning Irish racer John Simpson, who will be running a Suzuki SV650 in the Thundersport championship. 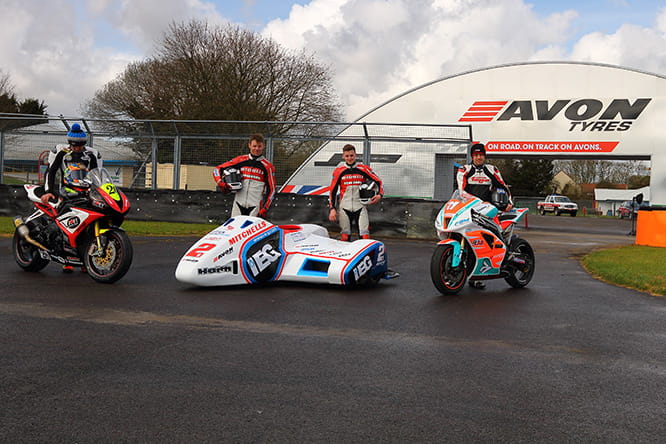 When it comes to tyres, Avon own the world of sidecar racing. According to chair man Tom Birchall, they saved the sport from extinction, putting in time and money when other manufacturers showed no interest.

Avon are also dominant in classic racing. It helps having over 100 years of tyre building experience to draw on, with modern versions of tyres in classic sizes to suit any older race bike.

The company is making a gradual return to the modern solo road racing scene with variants of the Avon 3D Ultra Extreme tyre. Rob Hodson won the Supertwins class at the Manx GP in 2015, setting a new lap record on the way. As well as helping selected riders at big events, Avon is also offering support at the grass roots level of club racing. Their tyres were used as the control rubber in the 2015 Aprilia RRV450GP series, and will be the control tyre for the 2016 Irish Road Race championship.

In the road bike world, Avon make tyres to fit any bike you care to name. If you want a tyre for your tourer, a sportsbike, an adventure bike, a cruiser or maybe your 80s or 90s Japanese classic, Avon have one. Flick through the fitment guide in their 76 page catalogue, and you’ll even find full details, including tyre pressures, for rubber to fit to a 1958 Triumph TR6R. (Check out www.avon-tyres.co.uk where you will find a unique classic tyre fitment guide). 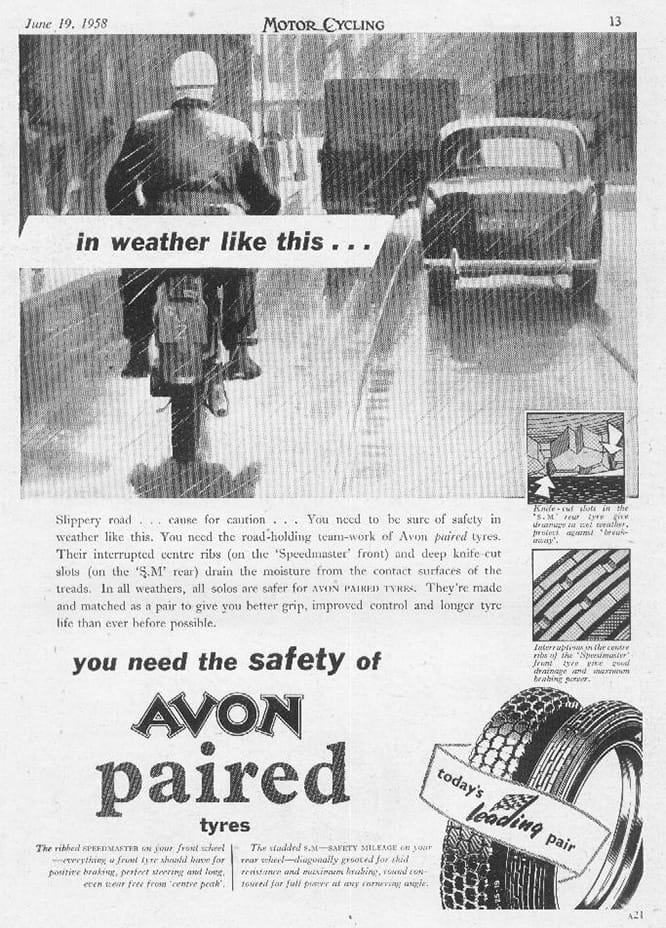 Compared to the world’s largest tyre manufacturers, Bridgestone and Michelin, the Avon portfolio is quite small, says Doug Ross, Head of Global Tyre Sales and, importantly, a keen road rider and former solo and sidecar racer. However, that means that they are the right size to be agile when it comes to developing new tyres or modifying the design of existing ones. 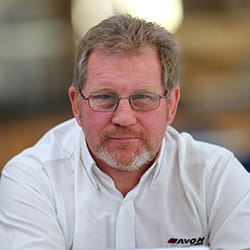 “We are expanding our business by working closely with Triumph as OEM (Original Equipment Manufacturer) suppliers,” Doug told me.

Currently they supply the whitewall tyres used on the Triumph Thunderbird 1700 LT. Triumph have been both surprised and pleased at how quickly Avon are able to respond to requests for modifications. “We can make the changes in a few weeks sometimes,” Doug said. Development of a new tyre can be achieved in as little as 11 months, depending on the complexity of the product.

“We are punching above our weight in a tough market,” Doug told me as he revealed that the company was planning to double the current level of motorcycle tyre sales by the year 2020.

Talking about the dedicated two and three wheel team at the Melksham factory, he said, “If you want to take it forward, you have to have like-minded people.” In other words, to achieve success, the people have to have bikes in their blood.

Typical of that enthusiasm is 37 year old Rich Dobson, who has been Avon’s test rider for 14 years. He grew up with bikes in his Dad’s Honda dealership. He rides in all weathers all year round, checking out everything from the StreetRunner tyres on commuter bikes to thrashing round race tracks on a Kawasaki ZX10R probing the limits of the 3D Ultra Extremes. 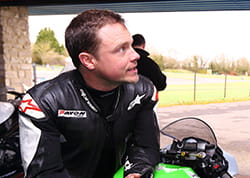 Rich’s pleasure in his work is obvious. His eyes light up as he describes his annual task load. It’s a dream job for somebody who loves to ride. His favourite? “Track testing,” he says, but he is happy riding anything. He is a key person in the development process. His feedback on stability, wet and dry grip, braking performance, corner entry and warm-up times give the engineers the information they need to refine the tyres to give the best possible performance.

Avon has been making tyres in the same factory since 1904. They started building motorcycle tyres in 1911. The company provides 700 jobs for UK workers and exports to over 50 countries.

British made stuff is always my first choice when the quality is good. I’m not so bothered about cost. I’ve been using Avon 3D Ultras on my 2008 GSXR 750 for the past five years. I don’t own a car and I ride 12 months of the year, for fun and for work. Having settled on Avons, I’ve not felt the need to change. They do their job well, including track day sessions in the fast group. They are also competitive on price.

The visit to Melksham was inspirational. The enthusiasm and commitment of all the people I met there and at the track was infectious. Profitable manufacturing in Britain is perfectly possible, as Avon prove every day. 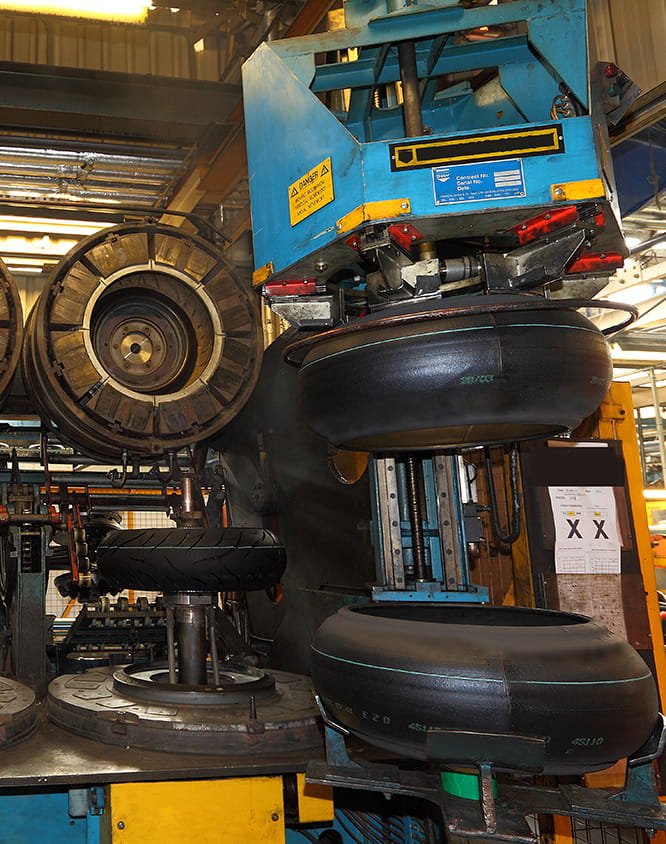 Photo: The cured tyre, left of picture with tread, has just come out of the mould. On the right, two green tyres await their turn. In the curing mould, the raised outer edges will be shaped to form the sidewalls and the tread will be created.

Do you run on Avons?  or