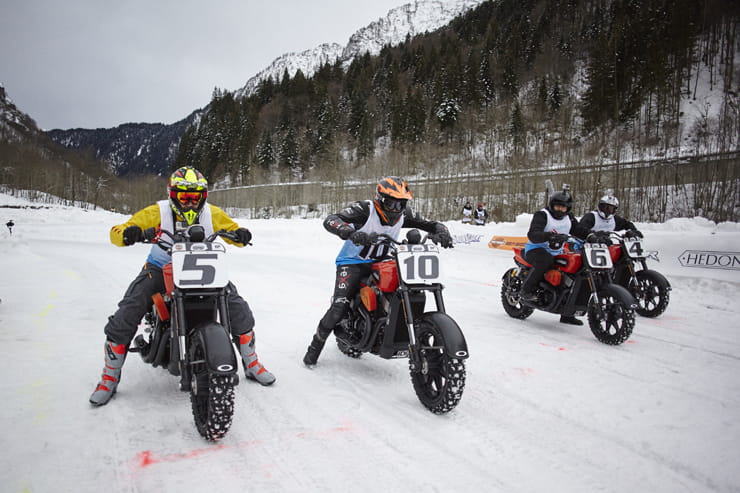 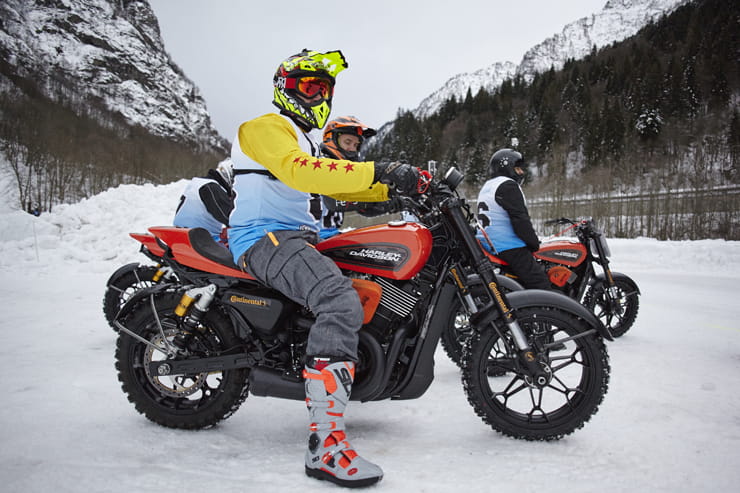 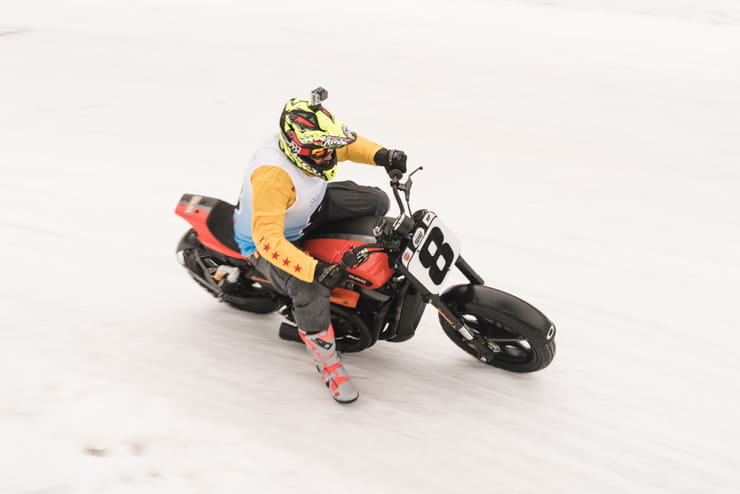 The four seasons of the Harley-Davidson 750 Street Rod.

Getting out of the van was interesting. Stepping onto sheet ice at the Rosa Ring in Italy was so slippery I almost broke a hip just walking to the sign-on area. Apparently the icier the surface the more grip is available from the spiked tyres because snow makes the spikes less effective. Eeek.

Gary Inman, the founder of the Quake events, suggested that the Harley riders needed more screws in our tyres. We had 500 in each tyre and he suggested doubling that to 1000 would have been better in the conditions. Rolling out on track for the first time and heading towards the first corner I had no idea what to expect. I was surprised that the level of grip was more than expected after skating across the car park in my boots. Lining up on the grid I thought ‘just give it a handful and see what happens’.

What happens is that just as you leave the start line the track narrows between two ice walls. The surface is really uneven as you turn left just after the gap in the wall and then fast right. This section was completely unpredictable. This is where the spectators and cameramen stand, crouched down on the corner waiting for the carnage. 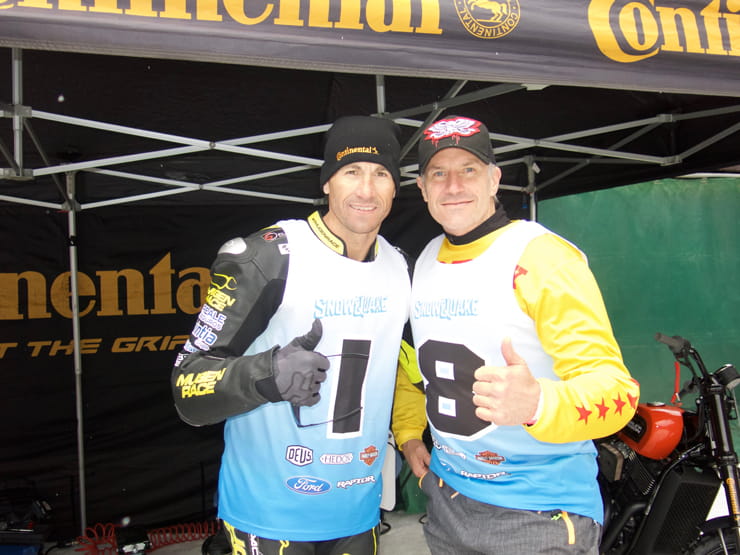 My new friend Ruben (as in Xaus!) had been testing the Harleys at his track in Andorra. I don’t have my own track so I asked what it felt like to ride on ice. "It's like a MotoGP Ducati. You need to be hard on the nose or hard on the back wheel, there is no feeling in-between."

I don’t have a MotoGP Ducati either and my surname isn’t Xaus. I wasn’t convinced I’d be braking or accelerating that hard at any point, especially in the downhill off camber section, so I made my excuses and left.

There is no brake when you turn right!

The Snowquake race bikes have no front brake. This isn't a problem when riding on a conventional dirt track oval because you only turn left and so can use the rear brake on the right footpeg to slow down or kick the back end out while you stabilise the bike with your steel shoe-clad left foot. Snowquake meanwhile has both left and right turns so when your right foot is on the ice you don’t have access to a back brake either. Following the right-hand, off-camber downhill turn you need to change direction quickly for the left leading onto the straight. With an enormous snow bank approaching fast, I try to remember what the organisers said about the event being ‘fun and friendly competition’. It is not a race apparently. No heats or races, just sessions with a prize for the fastest riders in each session. 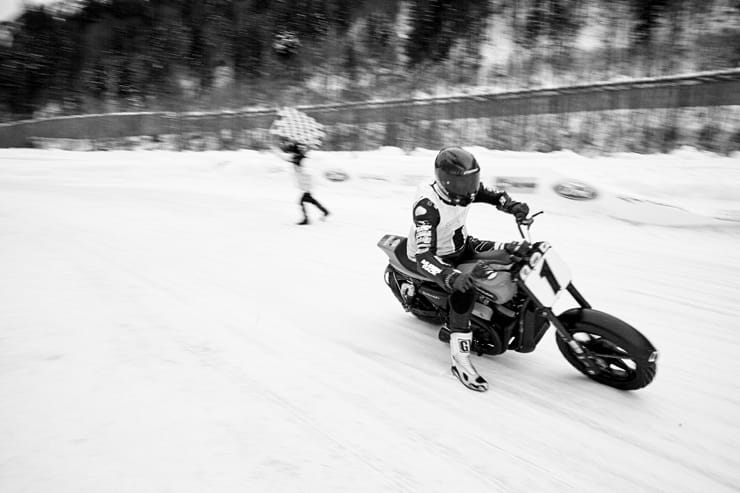 Like Dirtquake  the level of competition depends on the category you enter. Most of the riders will tell you that they are just going to have some fun and bring the bike back safe and the level of proposed enjoyment is evident with the number of 'fun' bikes entered: C90 cubs, monkey bikes and, the peoples champion, the bright coloured Vespas! All of the above were clad with spikes or screws in their tyres. 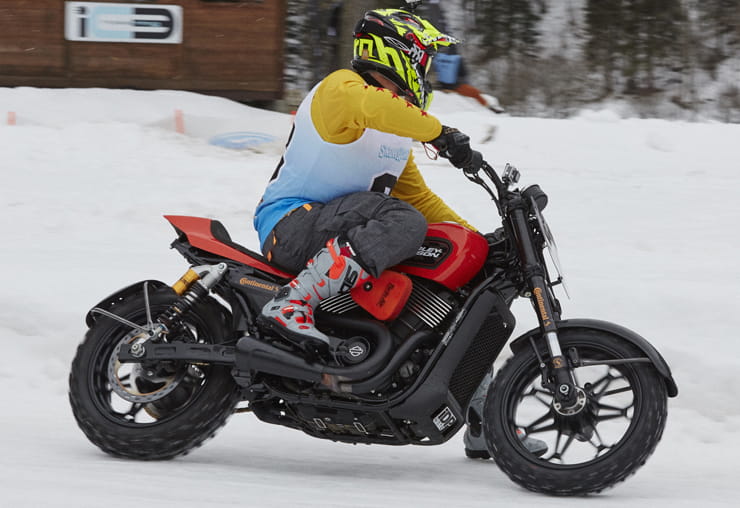 Fine. Except the entry list also includes the aforementioned MotoGP and SBK super racer Ruben Xaus, David Knight MBE, a 4-time enduro World Champion (regarded by many as one of the greatest off-road riders ever), Michael Laverty, Peter Hickman and Neil Hodgson. Not to shabby either. 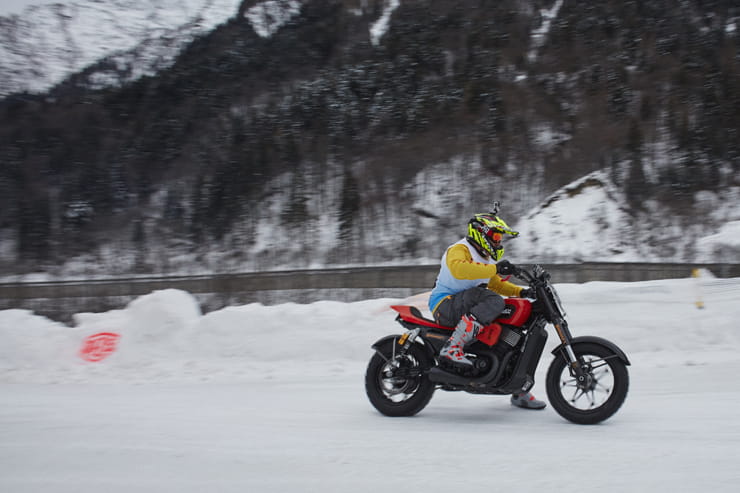 In the summer the Rosa Ring is an outdoor kart track. In the winter you can drive a car on the ice and car manufacturers use it for testing. The day before Snowquake Graziano Rossi, the Doctor’s dad was throwing a car around the track. 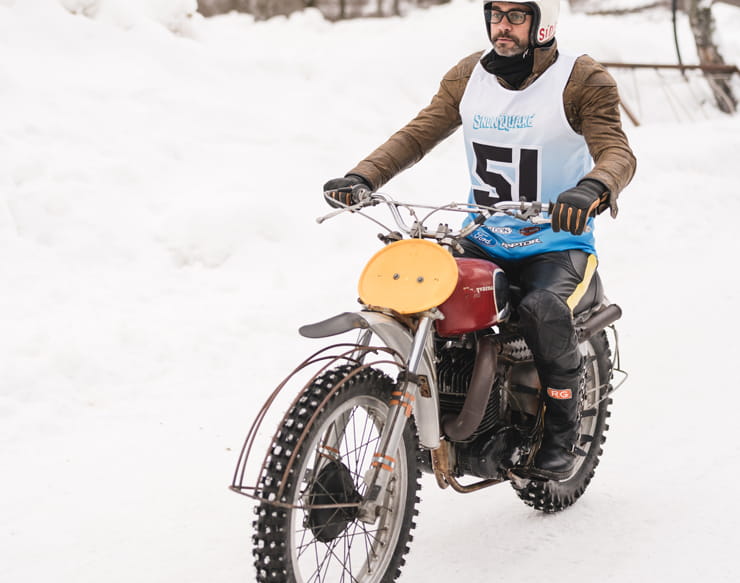 I was hanging on to the theory that the throttle is your friend and when in doubt gas it. Rolling off is only going to hurt. Speed is relative. The turn after the long straight most definitely was another aaaaaaaarrrrgggghhhh moment for me. When you hit the back brake and the back of the bike steps out before the turn you see the bank on the opposite side rush toward you. 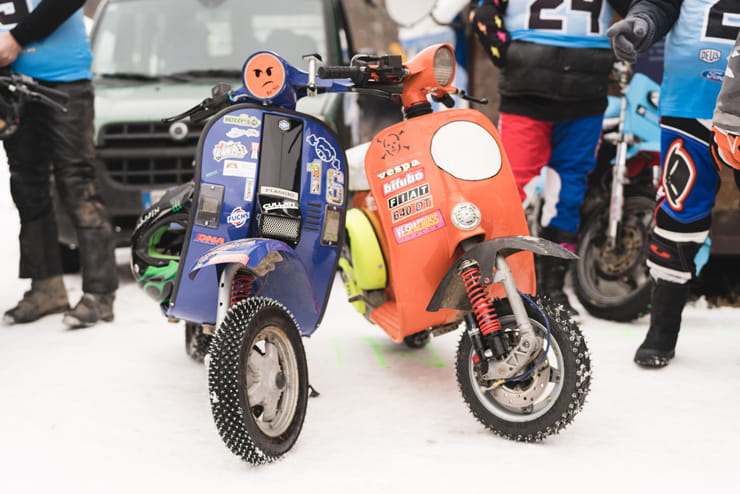 Wearing protective MX boots that are built to withstand a small war has a downside. You have far less feel, which combined with the freezing temperature meant I couldn’t feel the brake lever so I had to lift my leg to come off the brake. As if my magic as soon as I lifted my leg and pushed down on the inside bar the bike turned. 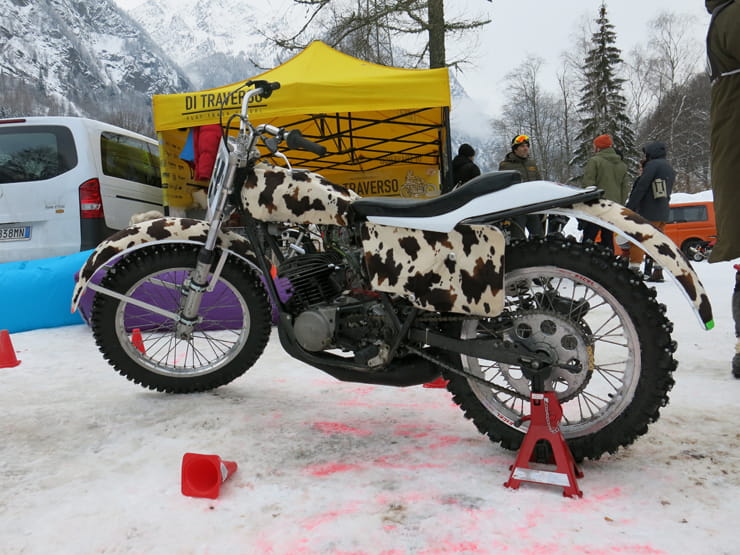 My first two heats went really well. In-between heats I watched the other riders race and it was clear who the really fast riders were. Mentally I picked the podium winners.

The interesting conditions bring the field closer. My comparison would be to a wet road race. No one got lapped in the 5 lap final. Even a back marker like me. I would estimate the gap between the front runners and the back not to have been more than half a lap. 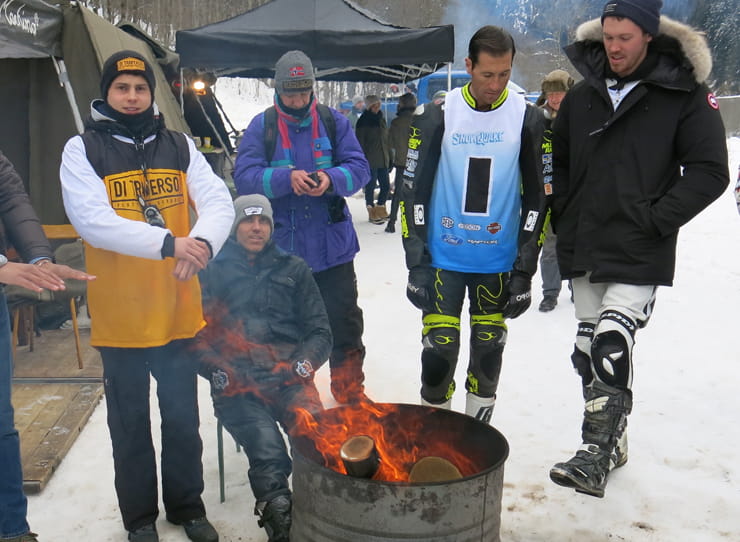 It was too much to expect that they all made mistakes in the race but I was hopeful. My race was the race not to be last man home, I succeeded if you count the fact that I finished the race and one of the high profile race leaders crashed out. 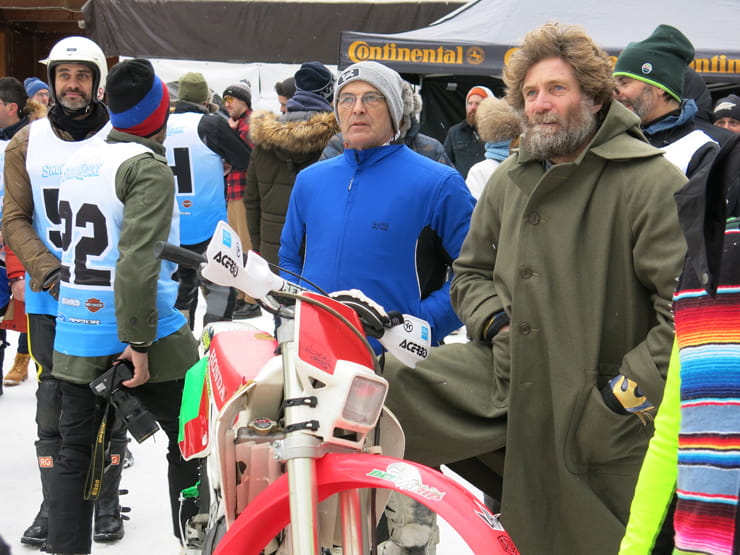 The atmosphere was relaxed. Deus Custom set up a café and had large pots of hot goulash hanging from a frame over fires. The bikes in the paddock were interesting. Some made from scrappers, and some were brand new bikes. One was a priceless Husqvarna owned and raced by Steve McQueen in the film On Any Sunday, a racing documentary that brought dirt bike racing to millions of people on the big screen. 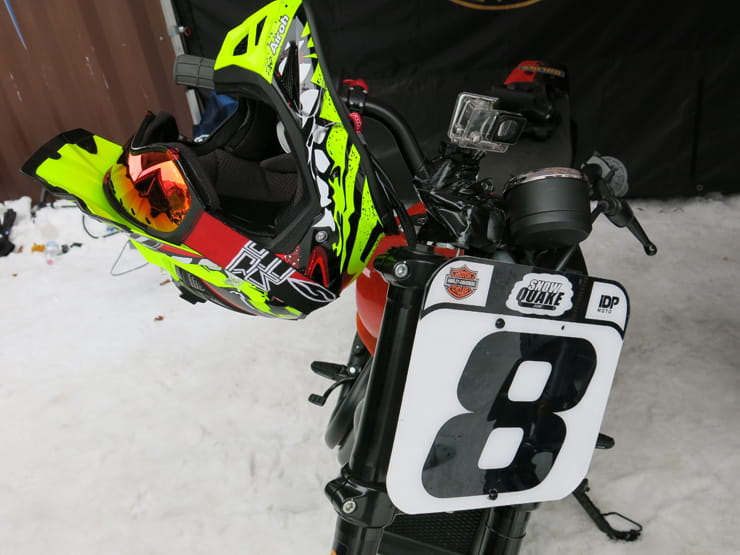 Racing on ice is a bucket list experience. Lining up on the grid with MotoGP racers, superbike champions and the legendary Dave Knight is surely a once-in-a-lifetime experience. The 'quake events must be the only place that anyone can sign up and rub shoulders with the world’s best.

To an outsider it’s easy to see Dirtquake, Snowquake as more about the people in the paddock than the spit and sawdust grass roots racing. But this event draws a slightly more serious enthusiast. It’s a big commitment to travel to Italy in January to race for one day.

We held a British Championship of our own. Third place was awarded a small ornamental art hog, second place won a goat. First place was a cow. In spite of only just hanging on and battling for last place in the final, my cow is sitting pride of place on my office desk. 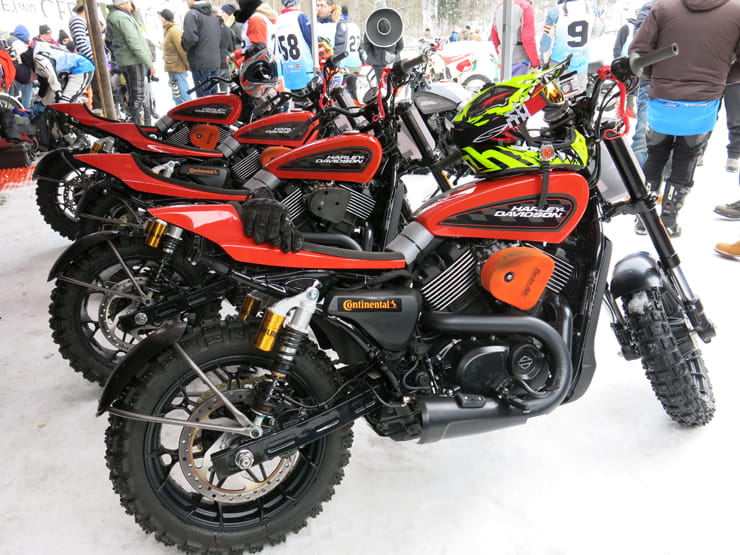 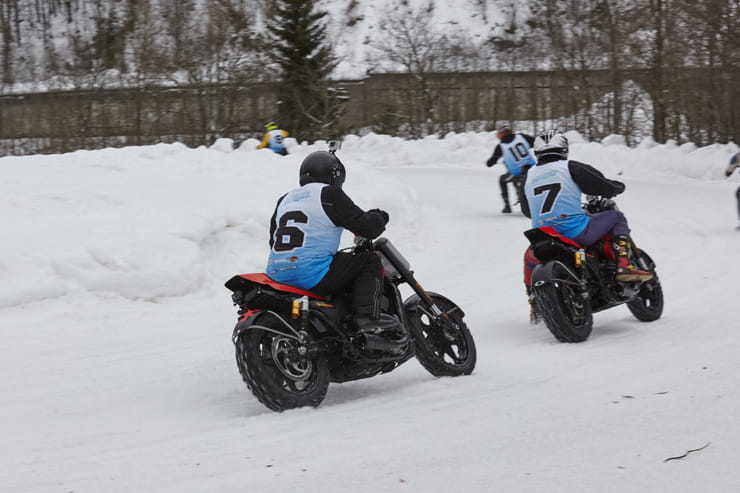 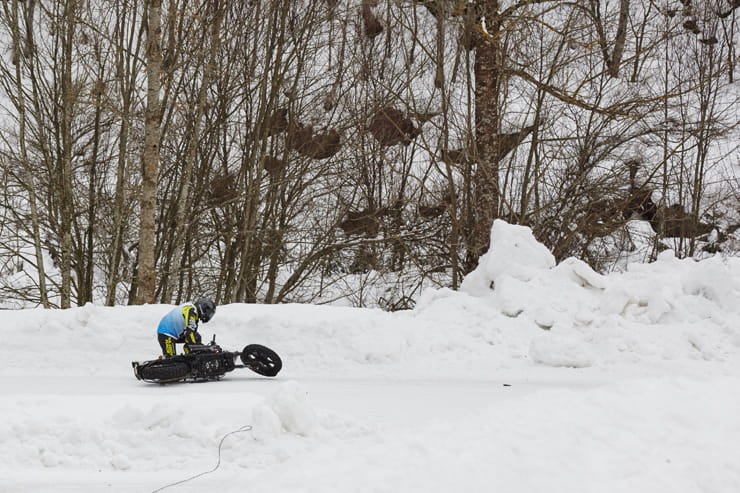 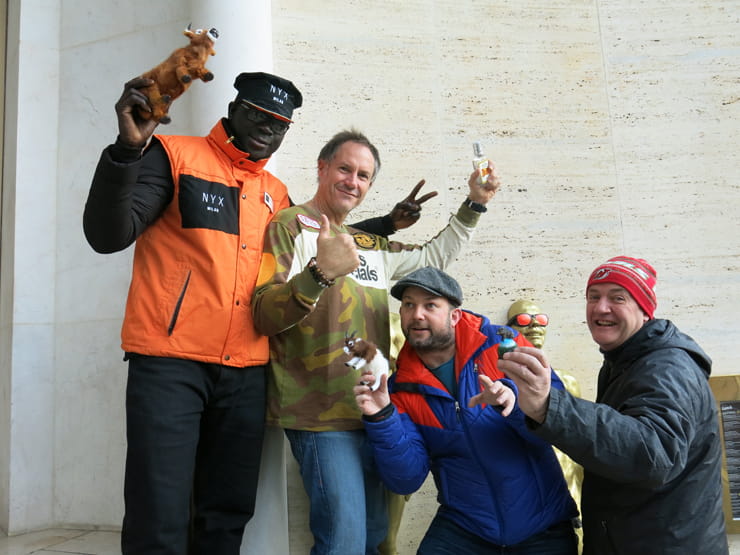 In the last 12 months I have ridden the Harley-Davidson Street Rod on the road, in the dirt at Dirtquake, on the beach with sand, sea and rain in the Mablethorpe Beach Races, and now on snow and ice in Italy at Snowquake. I feel like I have been part of the bike’s evolution from the standard road bike to the aggressive kick ass looking flat tracker.

All the Harley’s were prepared by IDP Moto who are based at Silverstone. Here’s what they do to make them race bikes:

Thanks to Harley-Davidson UK for entrusting me with a Street Rod.