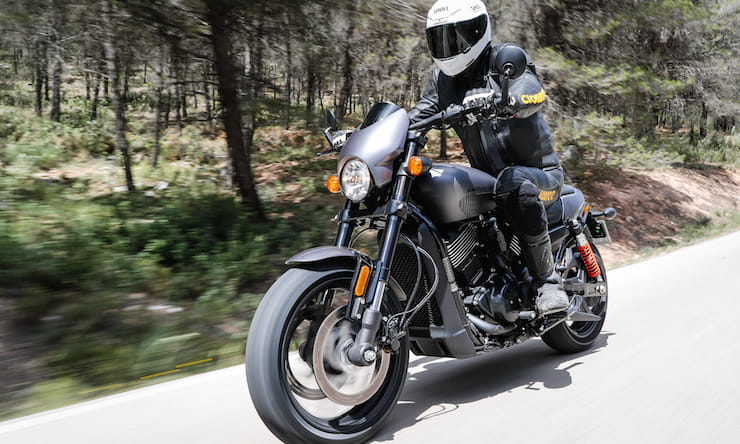 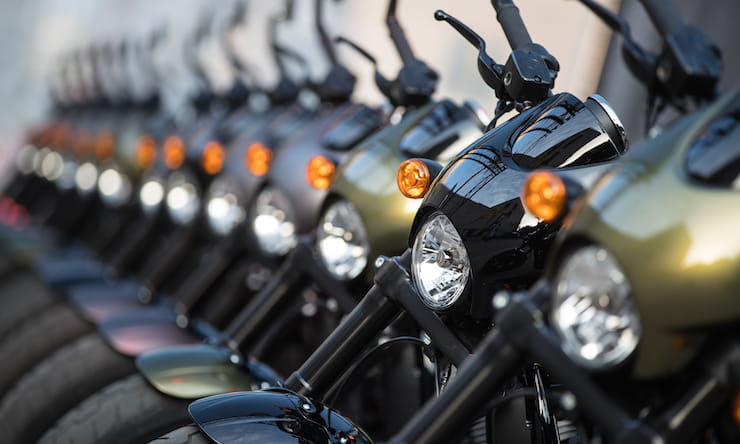 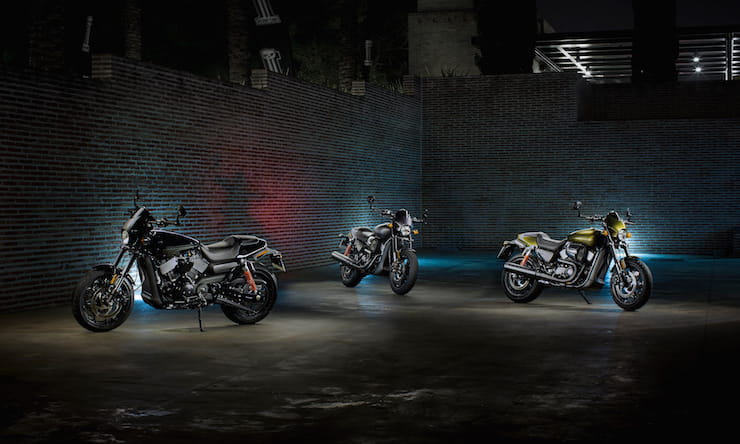 The short version
Harley takes its phenomenally successful Street 750 (35,000 sold in just three years), throws away the frame, suspension, much of the engine, styling and ergonomics and replaces them with tuned-up, sportier, sharper, cooler items to make a bike that’s significantly quicker with better handling and brakes. Styling gets ‘darker’ and more ‘street’, while the price goes up by just £750.

The revised 749cc, V-twin engine makes 20% more power, but is even more flexible, pulling smoothly via final belt drive from 2500rpm through to the 9000rpm redline with ease in almost any gear. The gearshift can be a bit clumsy and selecting neutral when the engine is cold is almost impossible.

The low seat makes it easy to manage in town, but allied to high-set mid-mounted pegs gives a slightly awkward riding position till you get used to it. The turning circle is tiny – perfect for city U-turns. The right-side footpeg is mounted slightly further out than the left one to clear the exhaust and allow decent ground clearance. It’s annoying for 10 miles and then you forget about it. The low, wide, flat handlebars feel like a stretch away at first, but give good accurate control when cornering.

ABS brakes are standard and there’s a second disc on the front wheel for more stopping power.

Performance in and out of town is strong, steering and handling are good and the unadjustable suspension copes well with bumps on factory settings, giving a comfy, but controlled ride.

Finish is mostly excellent, with only the budget-finished switchgear giving the game away that this is a mid-price motorcycle. 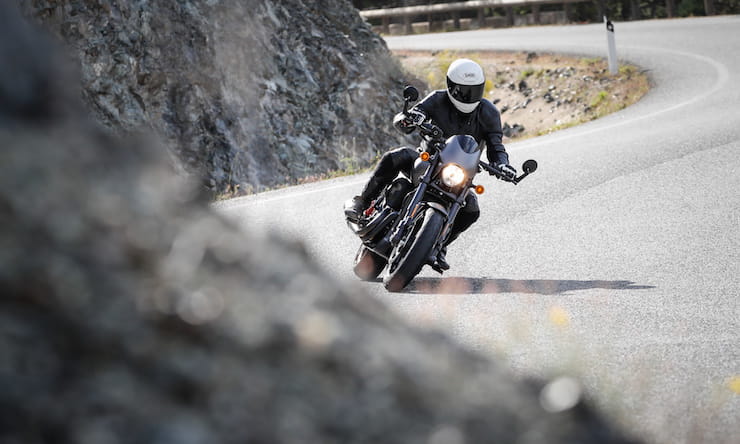 The long version – same facts, more words from our man at the Spanish riding launch

It sounds like a bad spaghetti western, but is actually a sinuous, seemingly never-ending series of tight, blind hairpins in the Sierra Ronda mountains just outside Malaga. And right now, me and Harley’s new Street Rod 750 are in a competition to see who make the other the most dizzy. For my part I’m chucking Little-Rod from side to side in the clumsy, uncouth manner of a wide-eyed, former road tester, out of his depth at the pace of the current UK press pack. Street Rod’s response is to shimmy, buck, weave and make all kinds of un-nerving motorcycle shapes, but…he always gets around the bend and always facing the right way…somehow, despite being ridden by a clown at a pace that no mid-price, middleweight motorcycle should have to endure.

Up ahead the fast lads are making it look easy – a testament to how good Harley’s new chassis really is. It’s a brave cruiser company that lops five degrees of their entry-level street bike’s steering angle, and then tunes the motor for 20 per cent more power on a machine that will more-often-than-not (but not exclusively) be bought by riders going up through motorcycling’s ranks, not coming back down. Harley are, indeed brave and, judging by the speed we’re attacking this cartoon-cornered road, they’ve succeeded. It’s me – an experienced rider and road tester with 35 years under my wheels - that’s holding us back right now, not the bike.

When some bloke called Rossi feathers the front brake into a turn it’s called ‘trail braking’ and we all coo about his talent. When your name is Rosie and you do it, heading for El Burgo, it’s called comfort braking and you are the pillock distracting everyone else behind with your flickering stop light. And the problem is that this kind of riding becomes more about survival than enjoyment. Right now I can tell you lots about the road, but not too much about the bike, other than I owe it a big drink and a bun for keeping me upright. 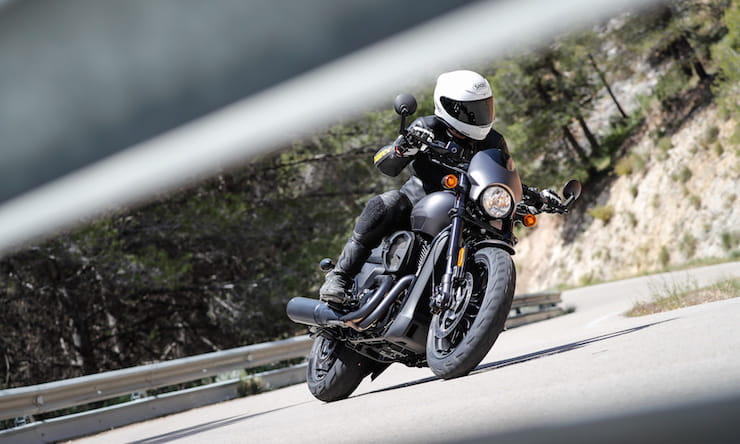 So, I shuffle back through the pack, breathe out and let myself enjoy the Street Rod at a slightly lower pace. Now I discover that the water-cooled V-twin motor can do flexible as well as frenzied.  As an experiment, I leave it in third gear and just roll on and off the throttle swapping 3500rpm for 5500rpm in and out of the never-ending turns. Almost instantly the ride becomes smoother, safer and much more controlled. Now there’s no braking, just riding and more time to read the road, look for the dust (did I mention how slippery the tarmac is here?) and actually pick a line. It’s a good engine, even if it does feel more like a Suzuki than a Harley.

Rad. Shutters. Auto. It’s a line from the film ‘The Dambusters’. The last thing the Lancaster pilots do as part of the shutdown procedure at the end of a stressful mission. And something I’ve got in the habit of saying to myself at the end of a, er, memorable ride. Rad shutters, flipping auto indeed.

This was my first launch for five years and I’ve forgotten how quick the pace gets. Thankfully, Harley’s new Street Rod 750, is easy to get along with, mostly forgiving and good enough on these crazy roads to have kept me on the right line…mostly. I came along thinking this was a Street 750 with some bolt-on bits, and was surprised to discover that there’s a new frame and swing-arm, much modified motor, new suspension, wheels, brakes, bodywork and tyres. It’s pretty much a whole new bike.

The water-cooled engine has new cylinder heads, revised cam timing and uprated fuel injection, plus a funky new air intake styled to look like a 70s supercharger. Power is up 20% on the standard Street 750 at 69.7bhp. Torque is also increased by 10% to just under 50 ft-lb.

On the road this means more flexibility, improved midrange, a redline set 1000rom higher and the ability to handle 30 miles of the legendary A397 Ronda road all in fourth gear on the way back to the hotel. It took a while to work that one out. For the first few miles I went back to swapping between third and fourth and cursing my clumsy riding as the bike bucked and squirmed on the entry to corners. Once I settled down, left it in fourth and started riding like someone who ought to know what they were doing, we found a rhythm, found some speed and stopped clenching into corners.

Harley’s research told them customers wanted a bike for riders with some experience needing a machine that can do daily riding and cope with the bumps and barges of town riding, while looking cool and showing off the badge. But it also had to be capable of heading for the hills at the weekend and keeping up in the canyons. And it had to look cool too. That’s a challenging brief for a bike costing £6745, but I’d say HD has come up with the goods. 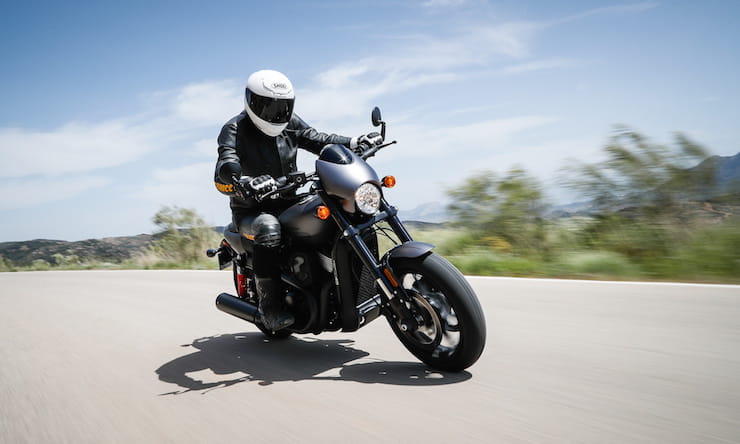 It’s a very different machine to the other, bigger Harleys, but Milwaukee’s DNA runs deep through the Street Rod. By the end of the day, cutting through rush-hour motorway traffic, we’re bonding. Me and Rod have come to an agreement; I won’t moan about the clunky gearchange, ‘too-hard-to-find’ neutral or the way he bucks and weaves when I change down into third going into another blind hairpin if he continues to make gaps in Spanish traffic that shouldn’t exist and get me back to the bar

Twelve minutes later and Little-Rod’s kept his side of the bargain. So, I’ll keep mine by saying ‘Yes’ this is a good bike. It looks great, goes well, handles better than any of us expected and is genuinely fun to be on. That souped-up motor has enough power to chase journalists around Spain, enough flexibility to make up for the ‘not-quite-there-yet’ gearbox and enough ’honk’ to make you smile as you gun it through olde-worlde Spanish villages. Sorry.

Some might question whether the footpegs are too high (it’s hard to put weight on the pegs in corners and does feel odd at first), The reality is that the footpegs are fine, but maybe the seat is a little low at just 765mm. And besides, we’d moan if it had a chassis this good and less ground clearance. HD claim 40 degrees of lean on the left and 37.3 on the right. In practice this means that the left only touches down on every fifth Andalusian corner (which will mean once a summer at most on a typical British B-road) but the right touches down on every other one.

This isn’t a criticism and it isn’t one of those HD clichés. Pretty much any mid-price middleweight would do the same on these roads. If you haven’t ridden them, put the Sierra Ronda on the bucket list, you won’t be disappointed.

And maybe you should do it on Street Rod. At just £6745 for the black one (a couple of hundred quid more for the silver or Olive version) it’s a heck of a lot of bike for the money. And it’s a Harley, which, if that matters, makes it very, very good value for something this talented. 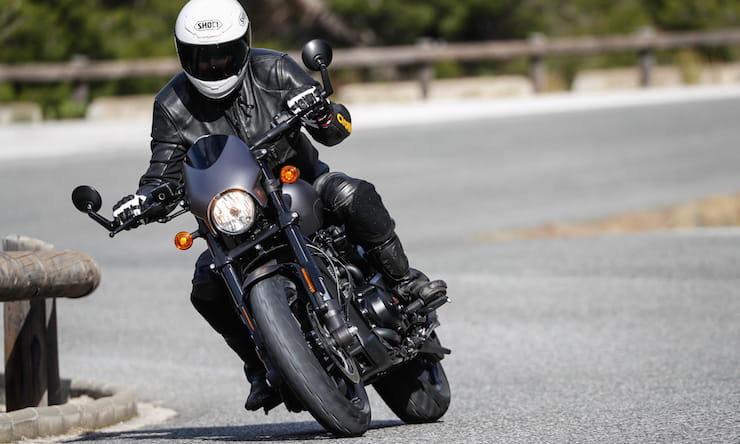 Harley’s base-model Street 750 is a great entry-level Hog. It would be easy to see the Street Rod as a ‘blinged-up’ version of the base bike, but the reality is that this is much more than that. The Street Rod is a genuinely capable, great-looking motorbike that does backroad scratching as well as it does commuting. Easy to ride with a flexible-but powerful engine and predictable handling too, all for well under £7k. Only a reluctance to find neutral when the engine is cold lets the side down and HD are smart enough to sort that out quickly…we hope. 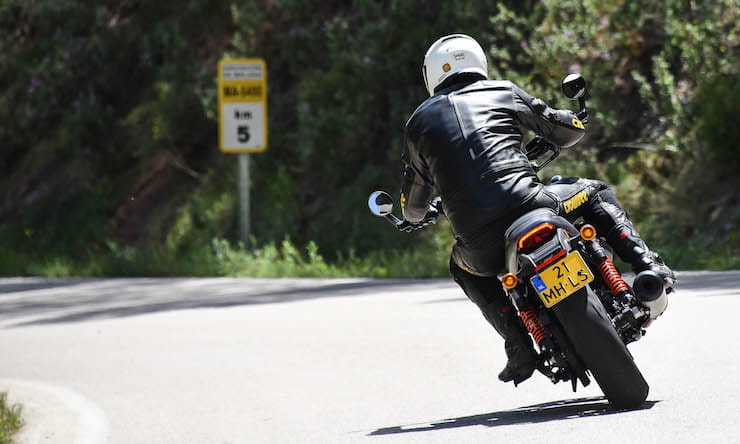