There are few motorcycling choices more daunting – or more exciting – than deciding on a first big bike after passing your test when you’re restricted, as most new bikers are, to a tight budget of, say, £2000.

In the first instance you’re by definition limited to used buys – and when you’re talking 500cc+ machines for under £2K, that invariably means ones that are at least six or seven years old so you want something reliable, proven and durable. A second dilemma is the enormous choice available; after all, virtually all of the major manufacturers offered, during that timeframe, say either middleweight four-cylinder or twin cylinder roadsters – so, which is the best? And third, there are also a baffling variety of types of bikes out there to tempt you, ranging from single cylinder street bikes to fully-faired all-rounder fours – so which is suitable for you?

But don’t be put off. The good news is that very same massive choice means there’s definitely something out there to suit you and to get you going in the big bike world. Buy wisely – and you can ready our guide to buying a used bike HERE and there’s nothing to stop you getting the machine that will be the start of your whole new motorcycling life. As for which exact bike to go for, here’s our pick of the 10 best used first big bikes for under £2000, to suit all types, and what you’ll be getting from each… 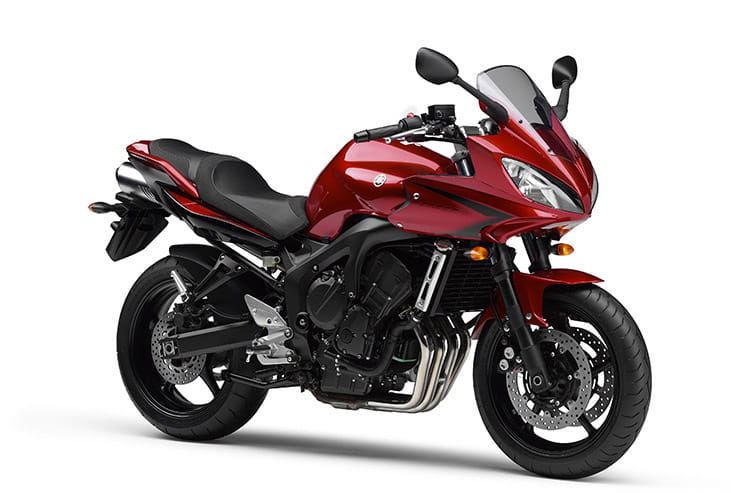 The original 1998 FZS600 Fazer was Yamaha’s reply to Suzuki’s Bandit and overtook it as an affordable, four-cylinder middleweight all-rounder. As such it became the first big bike for a whole generation. That bike was killed off by European emissions regulations in 2004 to be replaced by this all-new version complete with 90bhp, a catalytic converter and then trendy under seat exhausts. Although it didn’t quite have the same impact as the original it’s still a great first big bike with attractive styling, decent, free-revving performance, good handling and novice-friendly ergonomics and manners. It’s hugely versatile, too, more than capable of gobbling-up motorways, nipping around town or simply entertaining on a Sunday blast. Being based on proven components there’s no major reliability concerns but Yamaha finishes weren’t the best during this period so check for corrosion as it’ll need to have been looked after, while bodywork damage is expensive to fix if it’s suffered from novice tumbles. 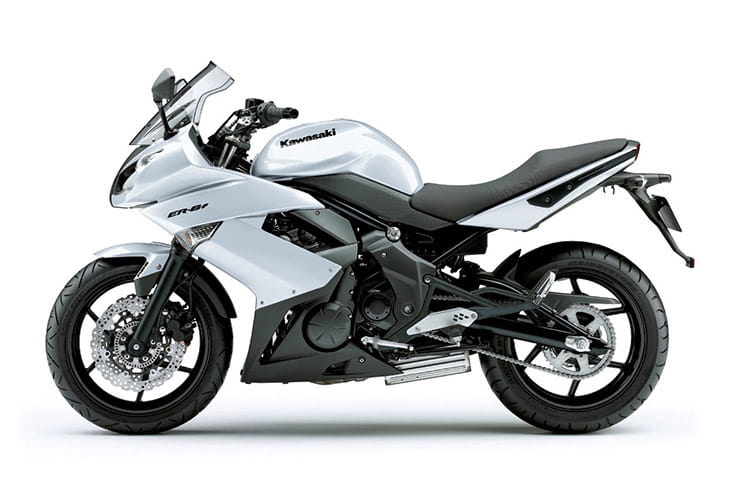 Though renamed in 2017 as the Z650 and Ninja 650 respectively, the ER-6n (for naked) and ER-6f (faired) upon which they’re derived remain two of Kawasaki’s success stories of the last 15 years. Originally launched in 2005, both are powered by a brilliantly willing 649cc parallel twin that’s ever bit as impressive as Suzuki’s rivals 645cc SV V-twin. The first major updated came in 2009, along with improved looks, which saw the previously slightly vibey engine smoothed out. The result is a lively but useful and novice-friendly 71bhp, solid reliability, twin cylinder lightness and slimness that makes it more manageable than most (making it particularly appealing to female riders) and, in this half-faired ‘f’ form, versatility enough to tackle everything bar off-road. Though built to a budget, quality isn’t bad and as long as looked after, it’s durable. Find a good one and you’ll have no regrets. 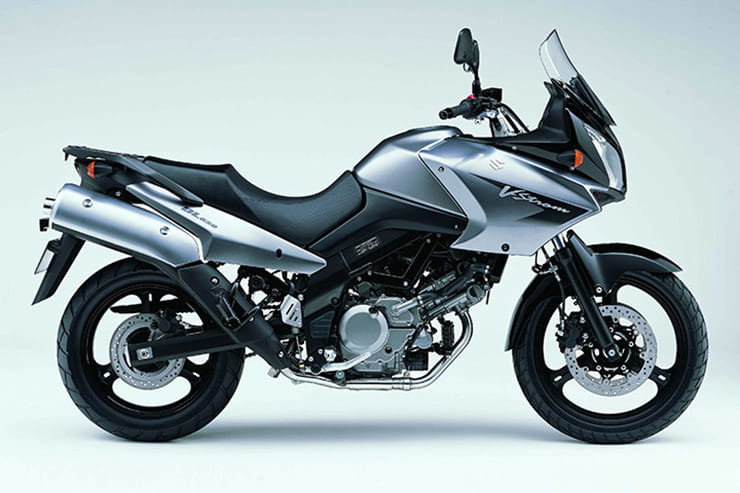 The adventure-styled VStrom was launched alongside Suzuki’s updated SV650 roadster in 2004 and is a taller, roomier, more upright all-rounder based on the same brilliant V-twin engine and trellis-style frame. As such, although no true ‘adventure’ (its road wheels and tyres make no claim to be able to go off-road), the VStrom does have most of the advantages of one (roomy proportions which suit taller riders, comfort, touring ability) but in a middleweight package at a great price. But what truly lifts the VStrom above the average is its fabulously willing, flexible and fun 645cc V-twin and neutral, easy handling – like the SV it truly is a bike that’s both easy and unintimidating for novices yet sufficiently engaging and practical for almost all riders as well. On the downside, its spec is a little basic, its looks are a tad old-fashioned (they were updated in 2011 but that version’s largely out of our price bracket) and, if neglected, can suffer from rot and corrosion. If looked after, however – and as it was so popular there are plenty out there – it’s a willing, practical and reliable first big bike that particularly suits taller riders. 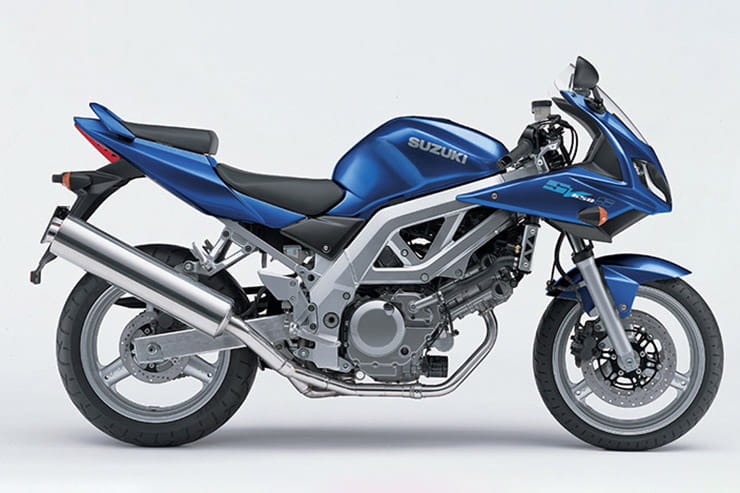 Suzuki’s middleweight SV V-twin remains so good and has been so popular over the years that it’s remains the definitive ‘first big bike’ with a version still in production today, 20 years after it was first launched.

That bike, in 1999, came in both half-faired (S) and naked (N) forms, both powered by a carbureted, 645cc V-twin in a sporty but easy going and versatile trellis chassis and due to its blend of value, easy, willing performance and unintimidating manners proved a big hit. But it’s the second-generation version, from 2003/4, with updated fuel-injected engine, new frame and more angular styling that we’re picking out here. Light, slim and easily manageable for novices yet also 70bhp entertaining, the SV also handles well and makes a good all-rounder. Best of all, though, it’s solid, reliable, there are plenty out there and it’s great value as well. Like with some other budget-orientated bikes here build quality is only fair and as some will have been around for a while and possibly neglected corrosion and poor maintenance should be looked for. That said, decent ones survive for this money and it’s not hard to see why the SV remains so popular to this day. 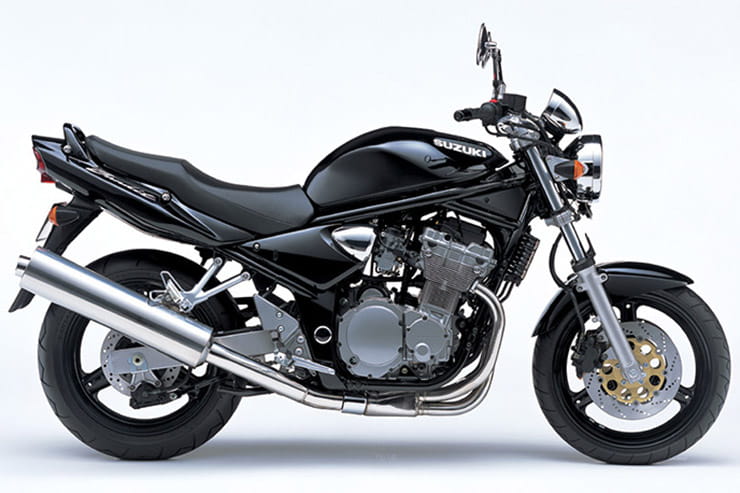 The original 600 Bandit way back in 1995 was so good and, more importantly, such good value, that it spawned a whole new class – the budget middleweight four, which proved particularly popular with first big bike buyers. Simply, rivals like Yamaha’s Fazer and Honda’s Hornet wouldn’t have existed without it.

The recipe was simple: take an existing, proven, if aging supersport engine (in this case from the old GSX600F), put it in a new, straightforward roadster chassis; bolt on some parts bin wheels/brakes/suspension and ancillaries such as clocks and keep the price low. The result, in 1995, was a 78bhp four-cylinder roadster (plus half-faired ‘S’ version) with easy manners, decent performance (for a roadster) and all at a price back then around two grand less than a far more intimidating supersports. No wonder they were bought in droves. Those first models were updated with a new frame and refreshed styling in 2000 before an all-new 650cc engine in 2006. Some, admittedly, are aging and can be used and abused but on the up side, £2K should get you a later 600 in fair nick and, as long as the cosmetics are decent, the mechanicals are virtually bulletproof. 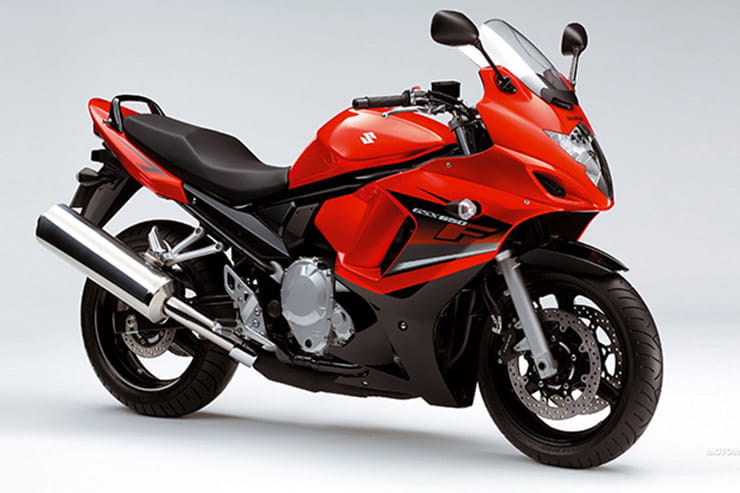 Suzuki’s unsung GSX-F may have effectively been a 650 Bandit with a full sports-touring fairing, which was never as celebrated as its famous father, but it remains a brilliant value all-rounder. Simply, if you fancy a full-size, four-cylinder all-rounder, nothing does it better for the money. It’s based around the later, water-cooled 656cc Bandit engine and chassis, puts out a perfectly decent 86bhp good for 130+mph, has easy, natural ergonomics, is a doddle to ride, is durable and proven and, basically – and the emphasis in some areas is on the ‘basic – does it all'. Yes, you might argue, there are others that do that – Honda’s CBF600 for example. But the Suzuki is somehow more engaging and entertaining, has all the right bits in all the right places without seeming cheap or plain and undercuts them all on price. That budget price means you need to, again, watch out for corrosion or abuse, but there’s no mechanical issues to worry about and, if you like the style and size – it’s definitely one of the larger bikes here but even female riders shouldn’t be too daunted – it’s one of the most versatile bikes here. 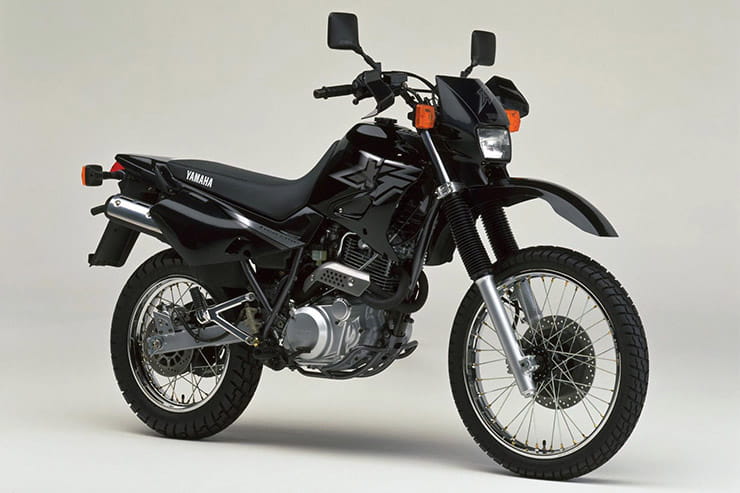 Straightforward, undaunting, single-cylinder trail bikes like the XT don’t really exist any more – which is a shame as their mix of bog basic mechanicals, light and easy manageability and true on and off road ability deliver a motorcycling experience like little else. They’re like two-wheeled Land Rovers.

Admittedly they’re not for everyone and the tallish seat, lumpy single-cylinder delivery and 80-odd mph top whack limits their appeal, but for taller riders and those who fancy a bit of gentle green-laning as part of their first big bike motorcycle experience, they can be a great choice. The XT, though now a little long in the tooth, remains the definitive choice. Its 45bhp air-cooled motor is as solid and simple as they come; its chassis is surprisingly easy to get on with and is genuinely as at home in the dirt as on Tarmac. There are no frills or much by way of comfort but as a rugged workhorse that’s as adept round town as on farm tracks and B-roads, the XT is more than worth consideration. 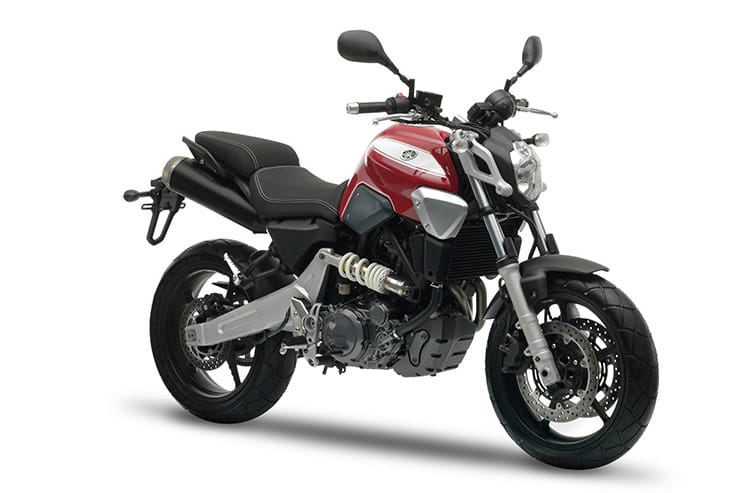 Street singles such as the MT-03 have never been big hits but their lightness and nimble proportions have plenty of appeal, especially to women or smaller riders, as a first big bike. Like most, the MT is based on trail bike mechanicals – in this case the liquid-cooled 660cc single from Yamaha’s XT660 which is flexible, willing – albeit typically single-cylinder ‘lumpy’ – and good for 45bhp. The difference is, in this form, as a street or city bike, the MT has shorter street suspension, smaller wheels and road rubber, lower more manageable ergonomics and a savvy style all its own. The result is a small, light (just 175kg), slim street bike with easy ride ability yet plenty of punch. Better still, the MT’s well built, decently equipped, tends to only get used on short hops (so mileages shouldn’t be high) and mechanically durable and reliable. Never popular so there aren’t that many out there and not the sort of bike we’d fancy on long or motorway trips, but as a stylish, short hop first big bike the MT’s got plenty going for it. 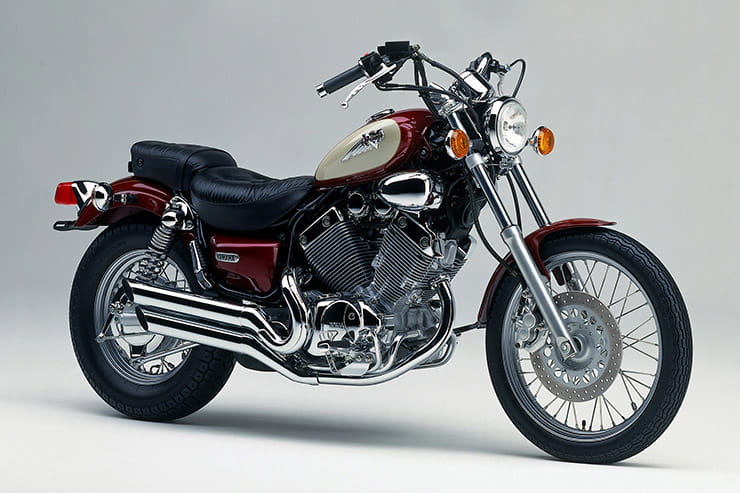 If you fancy a laid-back, custom style cruiser as your first big bike, Yamaha’s evergreen XV535 V-twin, although dating back over 30 years (somehow that seems to matter less with a cruiser, just look at Harley, after all), still is a great first buy. The key reason for that is its brilliant, willing, flexible and durable, air-cooled, shaft-drive, 535cc V-twin. The 38bhp it produces is soft, yet effective, its gearbox is slick and, despite the cruiser style, its handling is neutral and engaging. Best of all, it’s light, slim and has a ridiculously low seat height which is particularly welcoming for shorties and newbies. Yes, the XV’s getting on a bit but, as said, that matters less with this style of bike. But it’s also effective, charming, solid as old boots and, being a custom, tends to get looked after and polished. What’s more, there are no mechanical issues, being around so long means there’s still plenty to choose from and it’s great value as well. 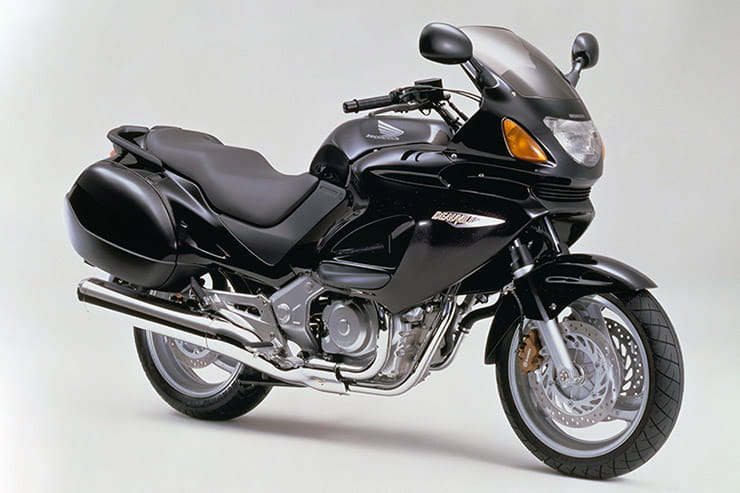 Who said you can get a proper touring bike as a new rider or for bargain money? Though sometimes derided as the ‘dullsville’, Honda’s well-equipped, über-comfortable, durable and effective Deauville is a great introduction to touring being comfortable, luggage-equipped and genuinely long-legged. The original 650 falls into our price bracket and is easy to ride, novice-friendly, well-built, durable and capable of immense mileages, so don’t be put off by high odometer readings. The shaft-drive is a boon, the 647cc V-twin is flexible and easy and there’s lots of quality Honda touches, too. The later 700 is an improvement but generally falls outside this price bracket. But the 650, if you find a good one, is a brilliant, budget introduction to tourers.