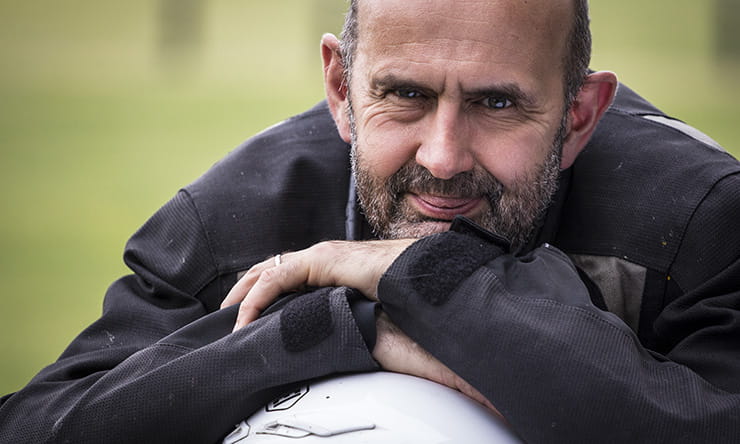 Sat in a café, getting some heat back into chilly morning fingers, I hear it before I see it. The bark of a big KTM twin. One of the enormous adventure models. I couldn’t tell you which one, because, to be honest, these huge trail monsters all look the same to me, but it was wearing a ‘17’ plate and so I’m guessing came with a price tag somewhere north of £14k. The rider looked serious; short, but stocky, helmet bristling with high tech electronics stuck to either side like bizarre plastic mandibles. He had that air and manner of a rider that knows their stuff and I’m guessing that from the amount of money on show in bike, kit and tech, he’s in this for the long haul.

So I was genuinely surprised when he hopped off the bike and wandered across the road and into an opticians without even putting the steering lock on. And I sat there for another 15 minutes watching his bike unattended and unlocked, shocked and somewhat angry at being his accidental biking minder.

Now, this town isn’t exactly a hotbed of criminality – for most people, starting to cross when the green man is flashing is as close as they get to serious misbehaviour – but if I had a carrier bag with £14,000 in it I wouldn’t just leave it next to a lamp post and expect it to still be there. And I wouldn’t leave my car unlocked or my bike without a steering lock.

Maybe he had something special that I wasn’t aware of. Perhaps those plastic techie mandibles have sensitive hairs linked to GPS trackers and digital spud guns or an auto-wedgie function on the KTM’s dash. Who-knows? Sadly, this guy’s approach to motorcycle security isn’t that unusual. Which is weird because I’m guessing he doesn’t leave his car unlocked or expect to be able to leave an envelope stuffed full of fivers next to a lamp post either.

I’ve seen the stats about bike theft, read the survey results on how many people don’t regularly use security and watched those video nasties on social media. Back in the ’90s my wife had a bike stolen despite it being disc-locked and in a very public place. And a mate in an equally twee Lincolnshire town to mine had two thugs break into his flat, tie him up and beat him till he told them where the keys were to his brand new YZF-R1.

So I know it’s not as simple as just putting on a steering lock, but the point is that not doing something as simple as that – or using a disc lock – makes stealing bikes so flipping easy that it becomes part of the apprentice bad guys’ transition from stomping on spiders to stomping on heads to get what they want.

A half decent disc lock and a small enough length of decent chain to allow you to lock your bike to something solid can be had for fifty quid. Put it in a bag and bungee it to your pillion seat whenever you go out and chances are it’ll be someone else’s bike missing, not yours. Bike theft happens so readily because bike theft is easy for even the dimmest of half-witted criminals. Do you, that smart, intelligent, witty lord of social media, really want to be made to look stupid by some ignorant lame-brained teenager, stealing bikes for pennies to go and buy more drugs?

Thought not and I don’t think Captain Mandible did either, so I left a plywood coffee stirring stick in his ignition barrel with BikeSocial’s web address written on one side and ‘This bike could have been mine’ on the other.