Do you have to wear proper motorcycle gear? UK law explained 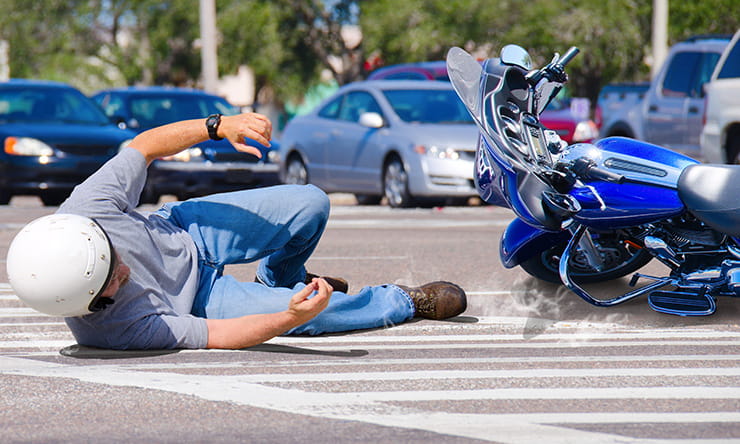 It’s a hot day. You’re only popping down the road on your bike. What’s the worst that can happen?

Well, you could get knocked off, and a legal precedent set back in 1975 means that if you fail to wear appropriate riding gear, and you get hurt, your claim for compensation could be reduced…

What should I wear on a motorcycle?

According to the Highway Code’s rules for motorcyclists (83-88), the rider and pillion must always wear a protective helmet. They’re also advised to wear eye protectors – which must comply with regulations – and should consider ear protection. Motorcyclists are also advised that ‘strong boots, gloves and suitable clothing may help to protect you if you are involved in a collision.’

In rule 86 it’s suggested that riders make themselves as visible as possible from the side, as well as the front and rear, and that they could wear ‘a light or brightly coloured helmet and fluorescent clothing or strips’.

Rule 87 says that when riding in the dark, you should ‘wear reflective clothing or strips to improve your visibility.’

Also, from 1st July 2011, motorcycle test examiners have had the power to halt a test if the rider isn’t in ‘suitable clothing’, the DVSA’s definition of which is the following:

• Motorcycle boots or other sturdy footwear that provides support and ankle protection.

• Textile or leather motorcycle jacket, or heavy denim jacket with several layers underneath

Advice on the best kit to wear is also given to riders in element A of the CBT (compulsory basic training).

Is it law to wear protective gear on a bike?

No, besides the helmet, but what’s vitally important to note is that it would be hard for a motorcyclist to claim that they weren’t aware of the potential safety benefits of wearing protective clothing, and that’s where the legal precedent set by Lord Denning (Master of the Rolls) comes in… 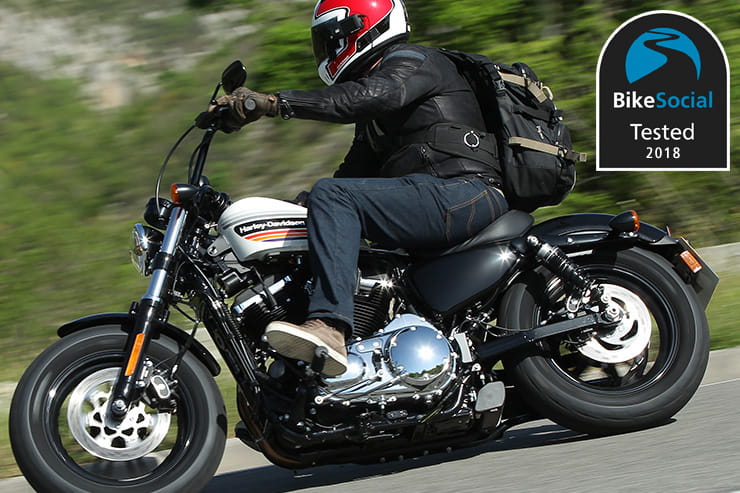 Despite the casual look, this rider is in fully CE-approved protective bike gear

Froom and others v Butcher

On 21 July 1975, Lord Denning (MR), known as the ‘the people’s judge’, upheld a defendant’s appeal, and in the process gave defence lawyers the opportunity to reduce potential injury claims by up to 25% due to ‘contributory negligence’.

In 1972, a car driven by Harold Froom (the plaintiff) collided with another car, driven by Brian Butcher (the defendant). The accident was deemed to be entirely the fault of Mr Butcher, and the judge in the original trial awarded Mr Froom £450 in general damages (around £2,600 today).

But Mr Froom wasn’t wearing his seatbelt, saying he’d seen many accidents “where, if seat belts are worn, then the… driver would never have got out of the vehicle”, and that a driver of his age did not “have to go roaring round the countryside, we just stick to our normal speed.”

Mr Butcher’s solicitor appealed the value of the damages, and Lord Denning held that ‘since the plaintiff's injuries to the head and chest would have been avoided by the wearing of a seat belt, the damages on that account should be reduced by 25 per cent’.

Since 1968, the Highway Code has advised drivers to wear their seatbelts, so Mr Froom should have known the safety implications. His payout was reduced to £350 (about £2,000 now).

Lord Denning’s decision was: “Seeing that it is compulsory to fit seatbelts, Parliament must have thought it sensible to wear them. But it did not make it compulsory for anyone to wear a seatbelt. Everyone is free to wear it or not as he pleases. Free in this sense, that if he does not wear it he is free from any penalty by the magistrates. Free in the sense that everyone is free to run his head against a brick wall, if he pleases. He can do it if he likes without being punished by the law. But it is not a sensible thing to do. If he does it, it is his own fault; and he has only himself to thank for the consequences.”

He went on to say that “In determining responsibility, the law eliminates the personal equation. It takes no notice of the views of the particular individual or of others like him. It requires everyone to exercise all such precautions as a man of ordinary prudence would observe.”

It wasn’t the first time contributory negligence had an effect on a case – previous rulings had seen a reduction in damages paid, but Lord Denning’s led to the decision that, in the case of injuries having been entirely avoidable through wearing a seat belt, damages would be reduced by a set 25%. If only some of the injuries would have been avoided, the reduction should be 15%, and if none of a plaintiff’s injuries would have been avoided had they been wearing a seat belt, they would not have their claim reduced.

“Whenever there is an accident,” said Lord Denning, “the negligent driver must bear by far the greatest share of responsibility. It was his negligence which caused the accident. It also was a prime cause of the whole of the damage. But in so far as the damage might have been avoided or lessened by wearing a seatbelt, the injured person must bear some share.”

What does contributory negligence mean for motorcyclists?

With clear guidance in the Highway Code (which every road user is expected to have read), as well as advice given in training, motorcyclists are expected to know the potential hazards of not wearing protective kit. If they don’t, and they have an accident, the opportunity is there for the other party to look for a reduction in the claim due to contributory negligence.

What motorcycle helmets are legal in the UK?

Helmets approved to US standards like DOT are not legal for use in the UK, and there are cases of defence lawyers attempting to reduce claims made by injured riders who were wearing non-UK approved helmets in the event of a non-fault accident. 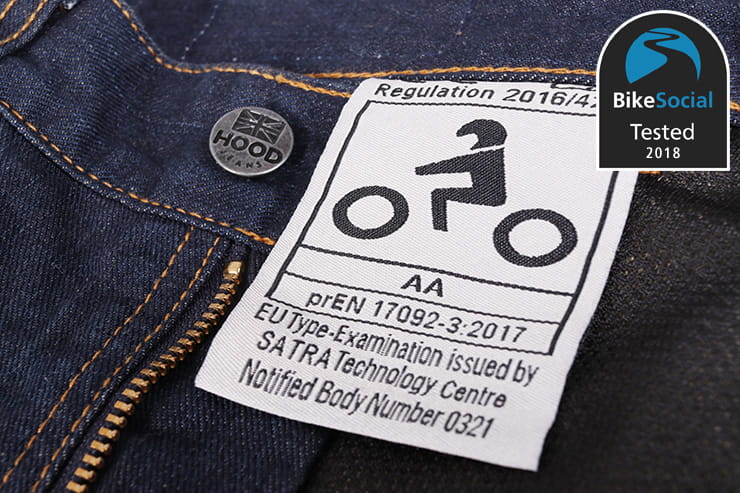 Do bikers have to wear CE-approved kit?

No, there is no legal requirement to wear any protective equipment in the UK, except a helmet. But injury claims are civil law, not criminal law, so regardless of whether you’re committing an offence, the precedent set by Froom and Butcher means that, if some or all of your injuries could have been avoided through wearing proper kit, your claim for damages could be reduced by up to 25%.

Where this gets more complicated is in the definition of what is protective; since 21 April 2018, all new bike kit is classed as Personal Protective Equipment (PPE), so needs to be tested to an agreed standard – you can find out more by reading our article here. There’s still no compulsion to wear it, but it’ll be easier to understand what level of protection you should expect.

That means one rider could have an accident in a jacket that doesn’t have CE-approval, but another could be in what is basically the same garment – sold a year later – that had been through the testing process. In this case, the evidence of expert witnesses might be called into effect.

It’s also important to remember that it’s not about what you wear, it’s about the effect it could have on your injuries. For instance, broken bones might be deemed to have not been prevented had you been wearing leathers, so there would be no grounds for an attempt to be made to reduce the payout.

In the 2009 case of Smith v Finch, Mr Smith – a cyclist – sadly suffered severe head injuries after a collision that was determined not to be his fault. He wasn’t wearing a cycle helmet, but the judge ruled that his injuries occurred at a speed in excess of 12mph, the approximate speed at which a cycle helmet is dropped from 1.5m in order to test its shock absorption for EN 1078.

What is the legal definition of contributory negligence?

‘Where any person suffers damage as the result partly of his own fault and partly of the fault of any other person or persons, a claim in respect of that damage shall not be defeated by reason of the fault of the person suffering the damage, but the damages recoverable in respect thereof shall be reduced to such extent as the court thinks just and equitable having regard to the claimant's share in the responsibility for the damage…’

Is this just insurers trying to wiggle out of paying?

If you are unlucky enough to be involved in an accident that wasn’t your fault, it will be the third party’s legal team that could try to reduce a payout through contributory negligence, not your own underwriter. The onus would be on them to prove that your injuries would have been reduced had you been wearing something different to what you were, and that’s where the value of having legal support and protection comes in; to fight a third party that might attempt to argue against your damages.

To put it simply though, if you wear proper bike kit, a defence team would not be able to use the Froom and Butcher case, so would have no grounds to reduce your damages.

Thanks very much to personal injury claims experts Minster Law for providing BikeSocial with the legal background to this article. Specialising in accidents involving a vehicle, or on a motorcycle, the team has helped more than 660,000 motorists since 2006. www.minsterlaw.co.uk