Riding off road is fun - lots of fun. You should try it if you haven't already, and don't be put off by thoughts of motocross crashes, lairy stunts and lengthy stays in hospital. There are thousands of miles of accessible byways - Green Roads – in the UK, open to motorbikes and perfect for a gentle bimble. No high speeds, no big drama, just a nice day out in the country and the knowledge that if you fall off it's probably not going to hurt. Well, not too much anyway. All you need's a road legal bike with a bit off off-road potential and decent ground clearance. Ideally something light enough to pick up when (not if) you drop it in the mud, quiet enough not to frighten horses and dogs or disturb walkers and neighbours, cheap enough so you don't mind getting it dirty, and robust enough so you can kick it straight if you bend it. There are plenty around, so here's a selection of suitable metal we've spotted this week. 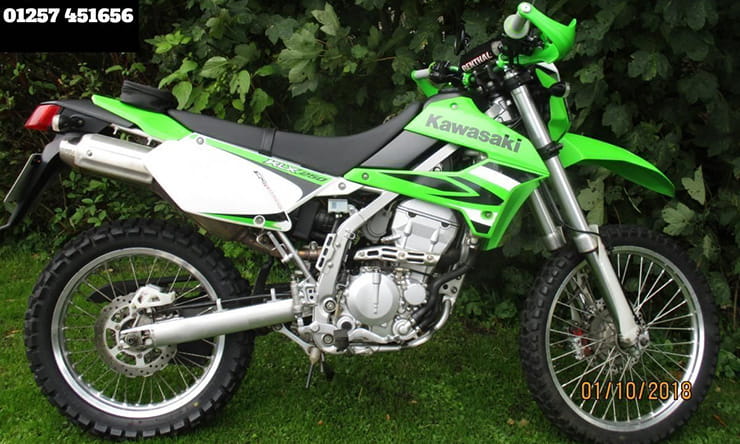 If you fancy something a bit more modern than the Honda, how about this? It's actually the same age as the XL, but from a completely different generation. The KLX250S was developed from the earlier KLX250 and 300 - both proper clubman Enduro bikes. This was much softer, more road-oriented, and more beginner-friendly. So it has electric start, softer (but still adjustable) suspension, softer power delivery (and better economy), a less aggressive riding position and a wider range of gearing, so it's capable of keeping up with traffic on the road as well as tackling steep or boggy bits off road.

This one looks really clean, so we'd suspect it hasn't seen much off-road action. But we'd still be looking closely at all bearings and pivots, which suffer not so much from mud and water on the trails as from over-enthusiastic jetwashing afterwards. Same goes for frame and engine paint although again, this looks good from what we can see in the photos. Engines are reliable in normal use, and should be quiet and smoke-free, and start on the button. They're set up to run very lean as standard though, to get through emissions tests, and there are benfits to be had from a proper carburettor set-up and re-jet. You could get a little more power from an aftermarket exhaust too, but only at the expense of a LOT more noise. Not what you want for responsible green-laning. 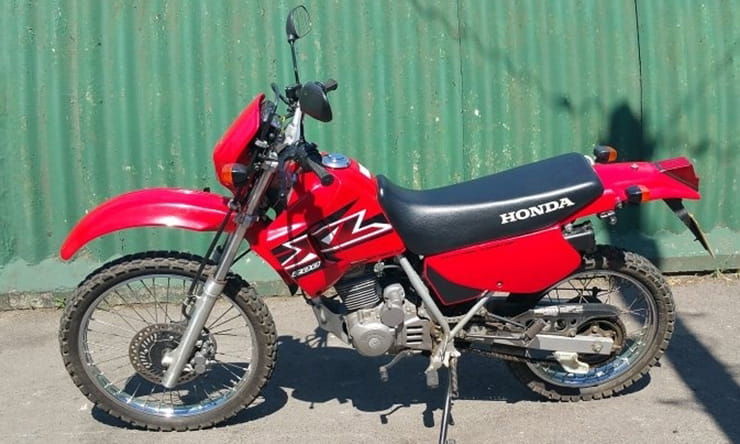 A small Honda trailbike is more or less the perfect introduction to gentle off-roading, and this XL200 looks like it hits the spot. The original XL200 of the early 80s was the ideal combination of simplicity, light weight and reliability, and although this is 25 years newer, it doesn't have 25 years of development – this is still a basic trail bike of the old school, produced in Brazil and not officially imported to the UK. So this has a km/h speedo (with obligatory mph stickers), and bodywork based on the late 90s XL125R, but otherwise it feels like an 80s trailie to ride - no hugely tall seat, no aggressive riding position, just relative comfort and a feeeling that you can go anywhere, so long as you're not in a huge hurry. This one looks standard (which is a Good Thing), and at 12,000 miles or thereabouts should have plenty of life left in if it's been looked after properly. These older Honda singles are known for top end rattles if they've been seriously thrashed and/or oil changes have been neglected, so listen out for rattles which don't go away at higher revs (low rev rattles are usually just down to a slightly slappy camchain). Look for smoke from cold start-up - a bit if fine, not too much, but it should disappear when warm. And check all bearings etc as a matter of course. The only thing we'd be slightly concerned about is spares supply – the usual suspects (Wemoto, David Silver and CMSNL) don't seem to have heard of this model... 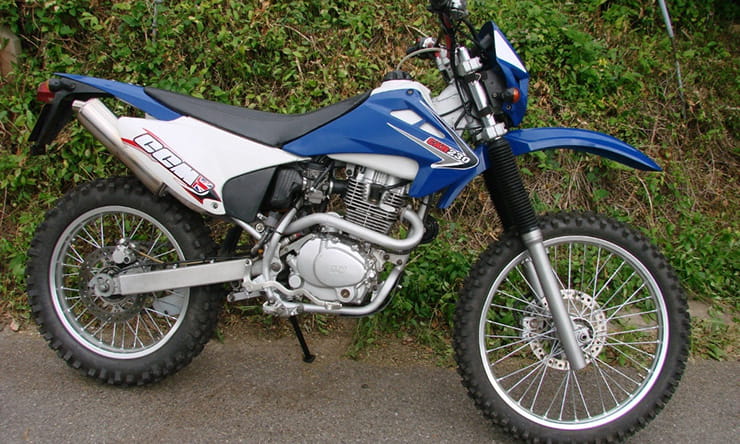 Anyone who's had anything to do with dirt bikes over the past fifty years or so will know the name CCM. From BSA-engined motocrossers to Rotax-motored supermotos and beyond, they've been building great bikes in Britain for decades. This CCM, though comes from much further afield, when the Bolton firm decided to buy in Chinese-built bikes to make up a 'starter' range beneath the more niche British-built higher end machines. Broadly based on older Honda designs (in this case the CRF230), they were powered by copies (Honda-licensed) of older air cooled engines. They're pretty basic machines, but that's fine for our purposes – we're not after winning races or carving MX-track berms, and although they're a bit lardy (this CXR230E – E for Enduro – weighs in at around 118Kg) they're actually pretty nice to ride, with real off-road ability. The finish isn't brilliant, but since this one looks clean enough (as it should with just 643 miles on the clock, although we'd be a bit suspicious about that until we saw some evidence in the form of previous MoTs etc), you've got the chance to treat it properly with anti-corrosion products and keep it nice. Spares and servicing info is hard to come by, until you realise that the same bikes were imported into other countries under different names – in particular as the Loncin LX250PY and the Marshin MRF250. Searches under those names turn up plenty of parts and info.

The price is about right (although we'd still put in a cheeky offer...), and it's something a bit out of the ordinary – even if the only genuinely CCM parts are the stickers on the tank and side panels – so worth a look if it's local to you. 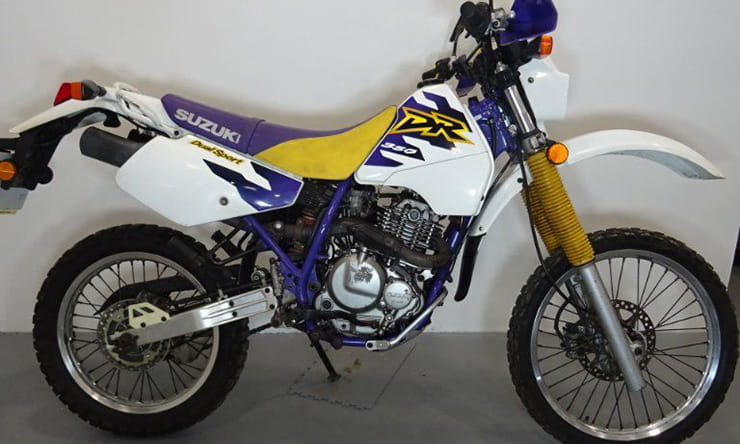 For many years the DR350 was the mainstay of the club Enduro scene – light, manageable, incredibly robust but still quick enough to be competitive and perfectly happy to be ridden to and from events. Things have moved on in the competition world since then, but those attributes still make it a great choice for green laning. The only trouble these days is finding a decent one - owners tend to hang on to them forever. This one looks pretty good - a bit tatty round the edges but all standard as far as we can see. Importantly, it's the fully road-legal SE model, which means it has electric start (there was also a competition-only version, and a kickstart-only version). It's 20 years old, so there'll be some checking to do – DRs are known for starting issues if the carb isn't in pefect fettle, and the petrol tap can clog up as well. Also not unknown for the tank to rust out from the inside - check for bubbling paint at the lower corners – and check for corroded or dinged wheel rims and seized spokes. As well as that you need to check all the usual stuff – wheel and steering bearings, suspension pivots and suspension itself (the rear shock will probably be tired by now) and consumables. The tyres on this look to be toast, so we'd budget to change those ASAP. Otherwise, we'd be all over it. 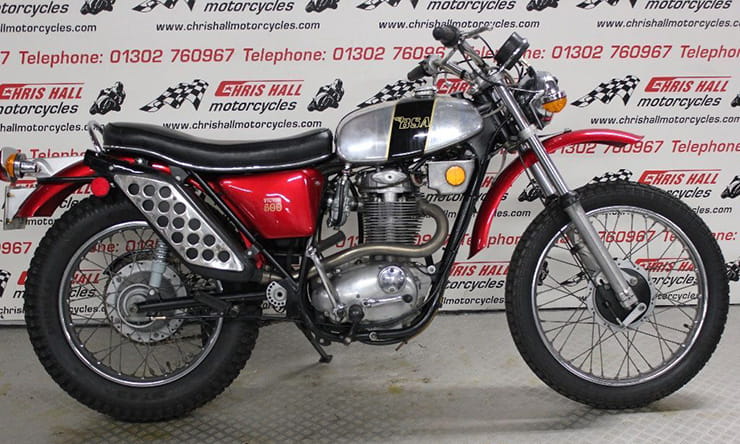 Err, what? I thought we were talking about green laning here, not classic parades... Yep, and this is just the job for both. In the olden days, an off road bike was just your normal bike, that you took off road - maybe with some knobblier tyres. It wasn't that uncommon for the same bike to serve as commuter, road racer and scrambler, with very few modifications. Eventually that changed, with specific road and off-road models being developed , even if they used the same basic mechanical package. In this case the BSA B-50 was available as the road/race B50SS Gold Star, in which form it was a successful endurance racer, and this B-50T. Despite the 1950s looks, the B50 – or Victor 500-Trail, to give it its full title – wasn't introduced til 1971, by which time it was a bit old hat (like the rest of the British bike industry's production around then). But it's got a harder, more purposeful feel than a lot of older Brit iron, with a reasonable 34bhp on tap, and can still do the business in the dirt. Like any old classic, a lot depends on what's been done to it, whether it's standard, or has been re-engineered to work better or just built up to look pretty. This one looks clean, but refreshingly not too shiny - that hopefully means it's been used properly and can be used properly again. The low mileage, the condition and the side reflectors suggest it's a recent import from the States – the B50T was mainly aimed at the US market. They're pretty reliable for an old Brit single, but the gearboxes don't like hard use, the clutch is prone to slipping and the ignition needs to be in top condition to avoid problems. There are modern fixes for all these problems though, as well as the possibility of a big bore taking it out to an even thumpier 572cc. Even in standard form though, this is going to be perfectly at home trickling down a pretty English lane in the sunshine. It's a bit pricey though, compared to the others - to be honest we were looking for a much more affordable BSA Bantam, and you can pick one of those up for half the money – but you know how it goes when you fall in love...