Where can you park a motorcycle? 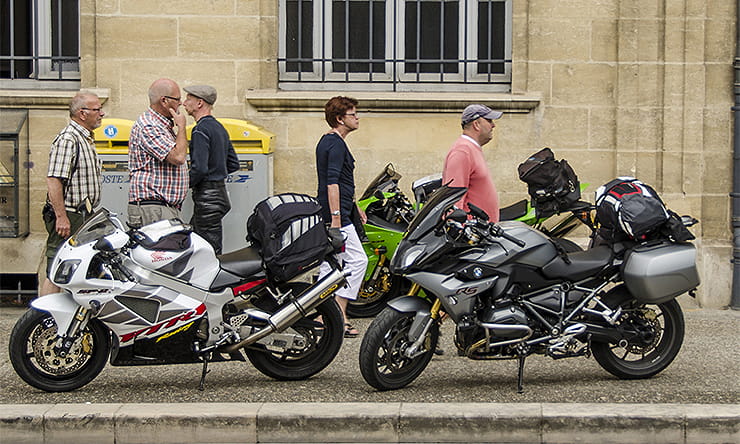 However, there are some principles you can apply depending on where you live and what kind of parking you have in mind…

Parking in motorcycle bays is free and the best option. Look on the city council website to see where they are – most have a useful map, though Birmingham’s doesn’t for some reason. Parking on pavements is sometimes allowed provided you don’t ‘obstruct the highway’, so use common sense. Technically, riding on the pavement is legal if you’re riding to a parking place for less than 15 yards, but it can aggravate people so for a quiet life it’s best to push. Just to confuse matters, some cities – Cambridge, for example – don’t allow pavement parking at all, and in others it’s left to the discretion of parking attendants. Parking in Pay and Display bays varies too – it will say on the sign whether motorcycles are allowed. 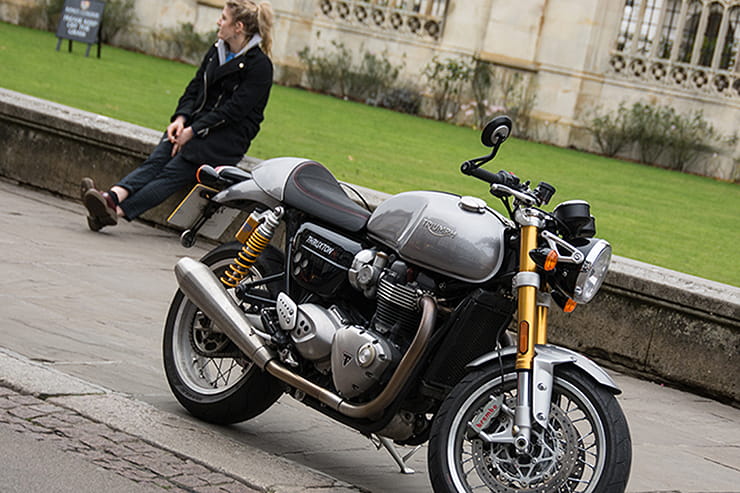 Bike parking in towns and villages

Generally easier because there are more gaps between parked vehicles you can slot a bike into, plus car parks often have a motorcycle area. The same vagaries about pavement parking apply – some councils don’t seem bothered if you do it sensibly, others will ticket you even if the bike is out of everyone’s way. 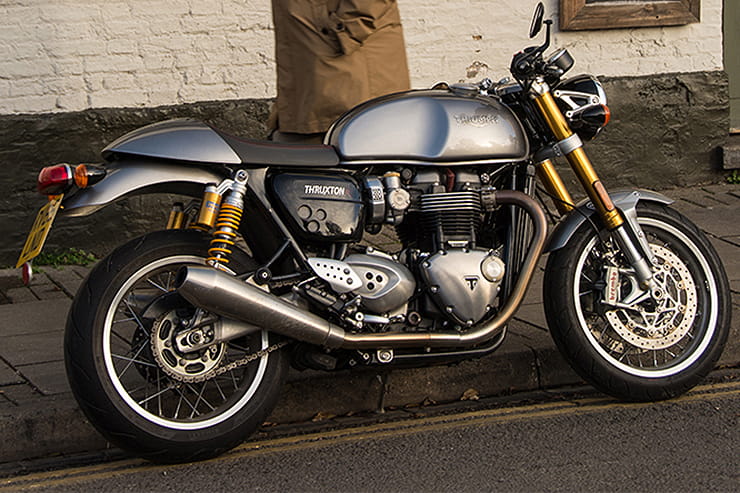 Good grief. There are 32 London boroughs, and each has their own parking rules ranging from bike-friendly (eg Dagenham and Barking, where you can park free in Pay and Display spaces) to money-grabbing (eg Westminster, where you have to pay to use motorcycle parking bays). And to make matters worse, the boundaries between boroughs are often not clear on the street so it’s difficult to know which rules apply. The only general rule is that pavement parking is not allowed. Fortunately some kind soul has built a London motorcycle parking website, with all free parking listed, plus all the rules of the various boroughs. Check it out here. 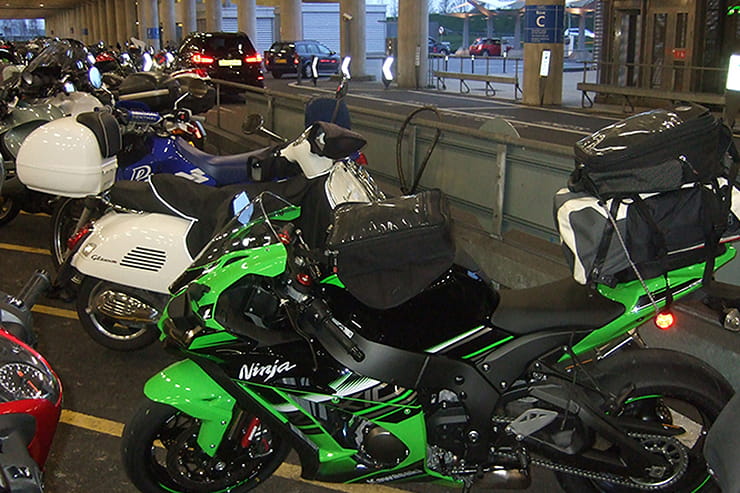 Parking a motorcycle in bicycle bays

You guessed it, parking here is a grey area. Some councils say they don’t allow it, while others have no specific ruling, which means you’d be in for a tediously complicated battle to win an appeal if you got a ticket. Best avoided.

The other big consideration when parking – especially in cities – is security. The easiest way to keep your bike safe is to consider what a thief must do to nick it, and make each stage as difficult as possible. Here’s the process:

The thief has to see it as something worth nicking as he drives past. Answer: put a cover on it. A £35 dust cover will do the job. He’ll probably see a more tempting prospect before bothering to come back for a snoop. Or you could just ride a crap bike. 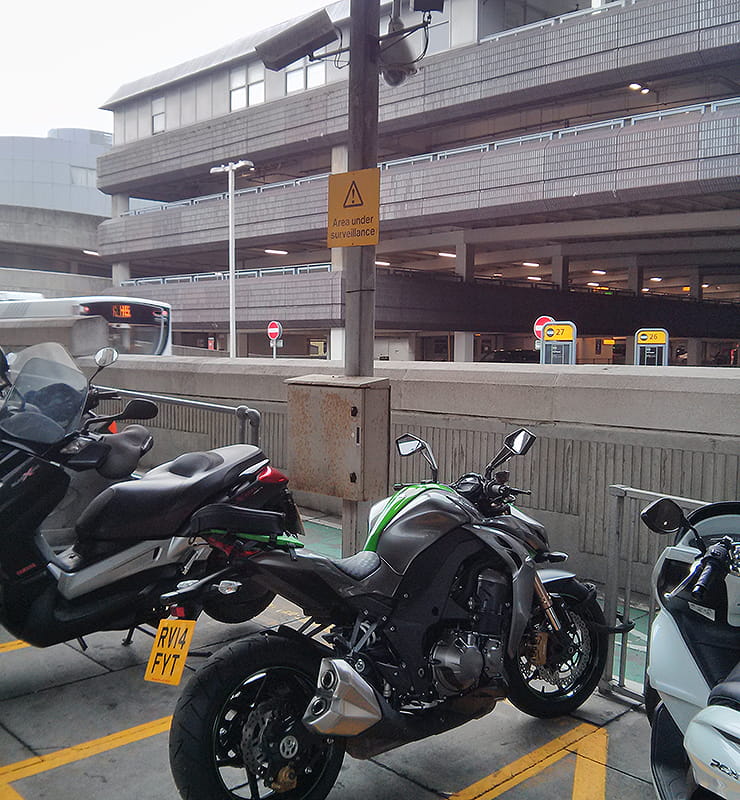 He’ll prefer a low risk nick. Answer: Park under a CCTV camera, near a police station or near a motorcycle shop – anywhere that the thief will either be recorded, or is likely to be interrupted by someone official or highly motivated (possibly with some highly motivated friends). Busy public places are by no means a guarantee of safety, but they’re less tempting for the thief than an unlit back street. 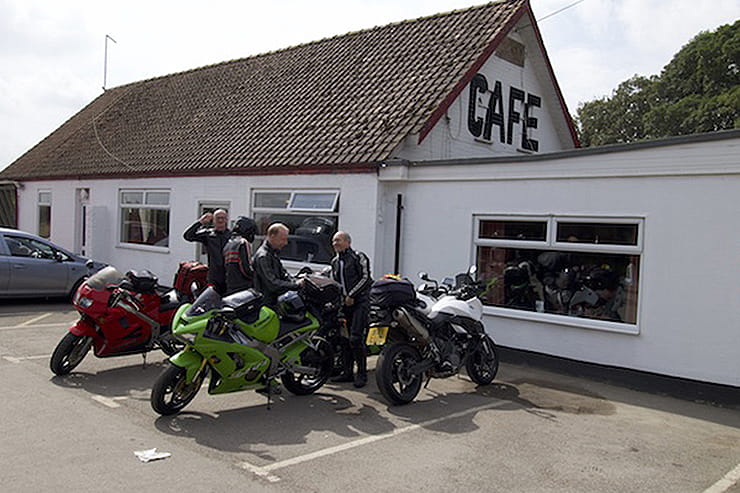 He’ll look for an easy nick. Anything that will delay either getting the bike into a van or pushing it away is good. And the more delays the better. A disc lock is better than nothing, but a high quality chain through the rear wheel and looped around a street lamp is better still. As soon as a thief sees a chain and solid object combo, he knows he needs an angle grinder (or the time to take out the back wheel) and will probably look for easier prey – chaining your bike to solid objects is a good idea because it means it can’t just be lifted into a van. 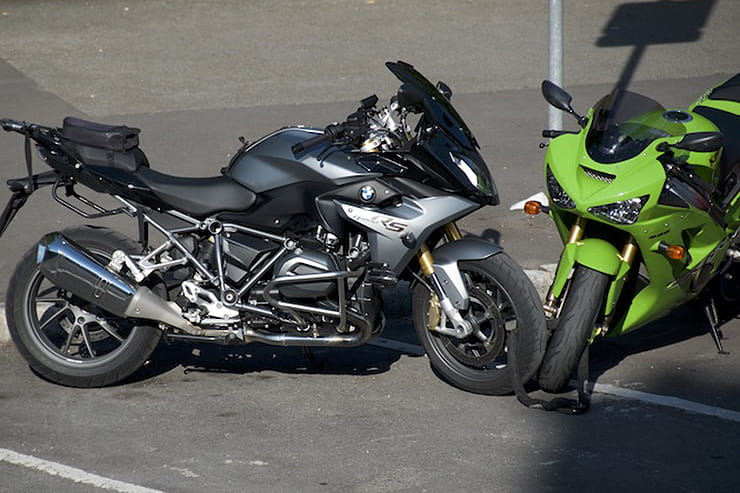 He wants a quiet life. Lots of passers-by will ignore an alarm on its own, but used in conjunction with a big chain they can be effective – the alarm makes people look, and they then see someone hacking at a chain… the police will probably get called at the very least. 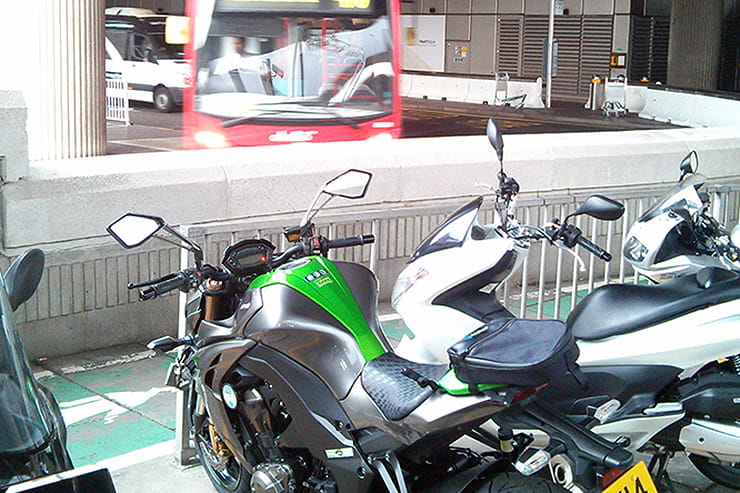 He wants to get away with it. Trackers and component marking (eg Datatag) are powerful deterrents because they mean that even when he’s got the bike in the van, his worries aren’t over. He risks either an irate owner and some chums turning up at his lock-up, or getting caught by a passing squad car with a load of components that are easily identified as stolen.