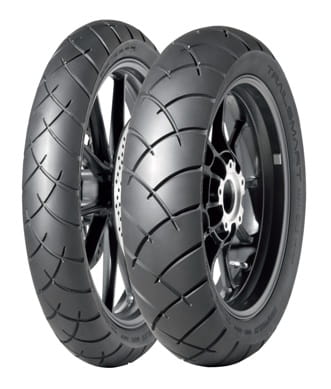 Equipped with a 110bhp, 229kg, BMW R1200GS (the air-cooled version from a couple of years ago), I entered the test arena; 160km of Spanish mountain roads. It’s like they were designed for testing motorbikes or apparel and on this occasion it was what the GS was wearing; a freshly scrubbed-in set of Dunlop TrailSmart’s that were being introduced to an array of surfaces around the famous Ronda road.

In 2014, the Adventure Bike market across Europe showed no let-up in popularity with a 12% growth in new registrations versus 2013. In fact, the best-selling model across all categories last year was the BMW R1200GS

However, while the adventure bikes might well be popular, they rarely go on any more strenuous an adventure than to the office and back or a weekend stomp around the country lanes. And for those purposes Dunlop had a tyre known as the Trailmax TR91 for a combination of on-road/off-road with a huge bias towards the tarmac.

The TR91’s were released in 2011 but bikes have come a long way in their development since then. The BMW, for example, has become water-cooled and gained an extra 15bhp. Suzuki, Kawasaki, Yamaha, Honda, Triumph and KTM, among others, have all replaced or added to their range with more powerful adventure or sports-touring bikes.

So with an ever-evolving adventure bike market, so comes the demand for improvements to the existing range of dual-purpose tyres. Dunlop has recognised this with the development of their latest offering, the TR91 replacement known as TrailSmart. 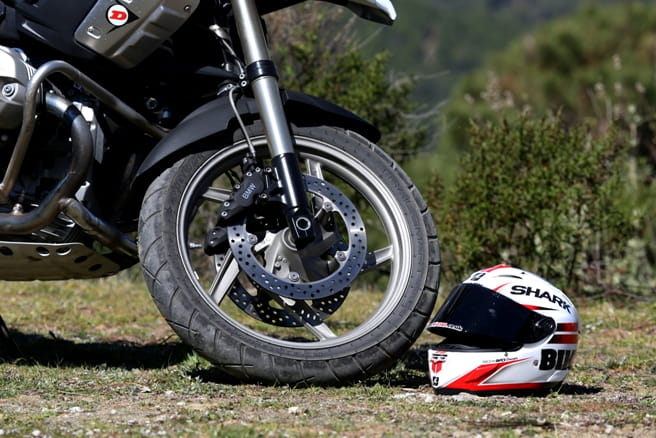 This new adventure tyre has been designed with a 90:10 bias in favour of tarmac yet when in production, the firm still required the tyre to retain its market-leading wet and dry grip as well as an increase in mileage over its predecessor – in fact 14% further is the claim although no specific figures have been released. You see the maximum life of a tyre depends on variables such as abrasion of the road surface, style of riding, weight of bike and so on.

Four new sizes are available allowing the tyre to be suitable for a broader range of bikes. Dunlop say “99% of the range is available now” with prices on the web starting at £63 for the front and £85 for the rear. 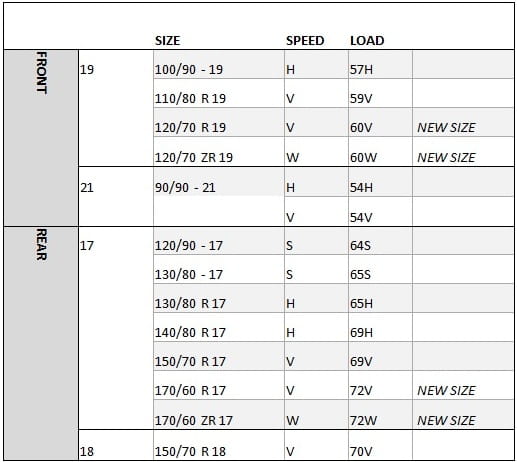 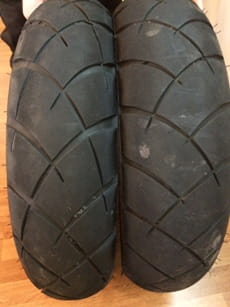 We got to compare a rear TR91 and a rear TrailSmart both of which had covered 7,500km. It was clear to see the older version had suffered what is known as ‘stepped wear’ on the shoulder; as the tread wore, the step shape became more prominent which created a fulcrum between the central contact patch to the outer edge. To the rider this would have unsettled the bike when at a specific lean angle.

The main changes are a revised tread pattern including longer pitch and groove angles plus a new compound with higher silica content.

What does that mean to the rider? Well, putting it simply, there’s a more even wear of the tread and a more efficient manner of “water evacuation”, which of course is marketing speak for 'getting rid of rain'. It’s the criss-cross pattern that none of Dunlop’s competitors have which is where the claimed advantage for wet grip comes from.

The press launch was based in Marbella and on offer was a test route consisting of 160 kilometres heading north into the mountains and including some 20km off-road.  The route contained almost every road surface imaginable and this gave a true test of the tyre’s ability. From fast, open bends on good quality asphalt to tight, twisty, narrow mountain passes with heavily weather and lorry damaged surfaces. Whether it was an off-camber, downhill, 2nd gear hairpin with stones spread over the apex or a wider, grippier 4th gear sweeper offering a clear line of sight into the distance, the TrailSmart did a top job at keeping the heavyweight GS stable, steady and pointing in the right direction. Not only that but almost from the off I had confidence in the tyres. I could trust that both front and rear did not have a trick up their sleeves. 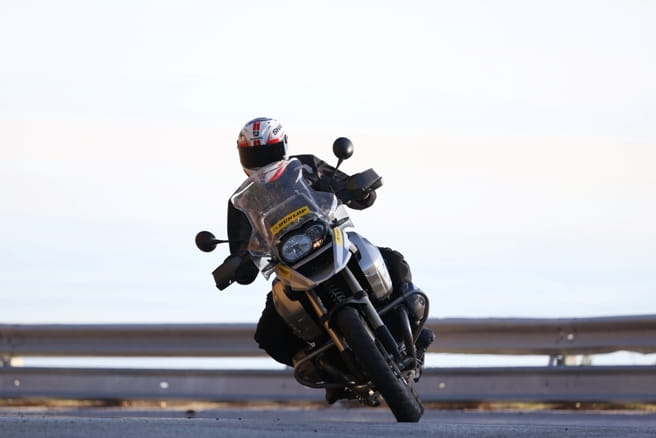 It’s as if the BMW had been given a new pair of custom-fit running trainers and was all eager to show off what it could do.

OK, so I was on a tyre test and therefore concentrating on the performance and characteristics from the latest Dunlop offering but the type of roads we used require maximum concentration and a high degree of accuracy in places. And that’s not even taking the stunning scenery into the equation. Thankfully the TrailSmart’s chewed up whatever was thrown at them and left me to worry about the puny-looking crash barrier that separated from and a 300 foot vertical drop.

Occasionally I deliberately turned tighter or more sharply to encourage an abnormal condition but only when the ambient temperature cooled later in the day did I feel anything like a lack of adhesion. This was a rare occurrence at an almost extreme level of testing. Even when encouraging the GS out of its upright comfort zone had no adverse effect on the tyres, they coped admirably throughout. Given the wet weather performance claims it was a shame there was no rain in Spain on this occasion but I can certainly concur with the performance levels that Dunlop aspired to when constructing the TrailSmart. 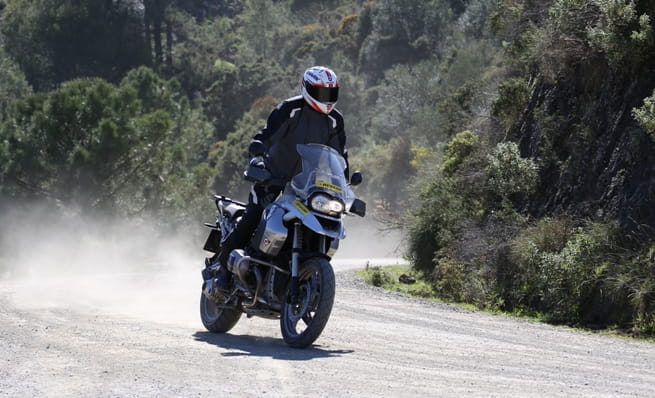 The off-road sections were dry, dusty and rutted and again the TrailSmart coped just as the marketing material told us it would. With traction control turned off, the tyres and bike faced relatively challenging hard-packed and looser shale-based surfaces. Realtive to the standard UK road conditions that is. Sticking to 2nd gear and even with encouraging blips from the throttle, they stood firm and held the GS and I upright.

They’re even quite pleasing to look at; perhaps a key point for some consumers. The symmetrical pattern could represent battle scars from a few rounds against Wolverine but even then there’s something quite masculine about the tread. If you have an adventure bike, and even if it never sees a grassy knoll, I’d encourage you to try a pair of these boots.

Gloves: BMW Two in One

Which tyre do you currenlty have on your bike?