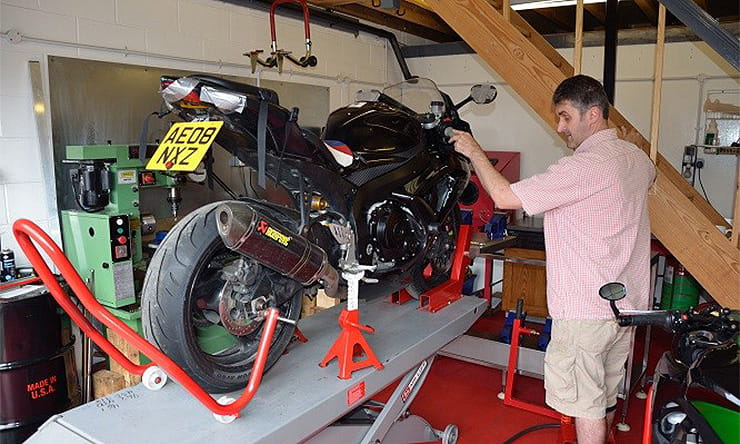 Motorcycle engine and chassis development peaked some years ago. The major issues of the current format have been resolved. You can have as much power, handling, braking and comfort as you can afford. Since 2005 the giant leaps have been in electronics. For the rest, continual refinement has been enough to keep up with the desires, real or imagined, of us, the buying public.

The next big shifts will be in chassis design and in motive power. There are plenty of alternative technologies awaiting their moment in the spotlight. The bike you ride in 20 years’ time will look a lot different.

But right now the hot ticket in the R&D Labs and showrooms is electronic suspension. It claims to add to the already considerable advantages offered by traction control. It comes in two flavours, electronically adjustable – you press buttons to do what you used to do with hand tools – or semi active – sensors assess road conditions several hundred times a second, and stepper motors or solenoids constantly adjust the settings to give the best ride.

Ducati Multistrada owner, Rob Cooper, speaking at an Oulton Park track day, told me he got greater control on the road and that it’s good on track too.

Journalist Rupert Paul, a rider of wide experience, described a recent trip on a DDC (Dynamic Damping Control) equipped BMW as “…incredible. It doesn’t remove the compromise inherent in static suspension set up, but it does improve it.”

Are electronic suspension systems worth it?

Not everyone is so enthusiastic. Suspension specialist Gareth Evans thinks that we are 15 years from seeing the technology realise its potential. He is also concerned that the electronic components used are not of high quality. If they were using the best available parts, he reckons that the semi-active model BMW S1000RR, would have a price tag of over £40,000.

For racers and super fast track day riders, it’s not the answer either. Although it is permitted in some classes of racing, semi-active suspension does not offer the fine control that the quick people need. For example, BSB rider Lee Jackson campaigned a DDC equipped BMW S1000RR in the 2013 National Superstock championship. He ditched the system for a conventional setup half way through the season.

While the top classes of racing maintain a ban on assisted suspension, the future lies more with touring bikes, thinks Colin Leeder who as owner of 100 Per Cent Suspension, is closely involved with race teams, track day riders and road riders.

There is also the question of added complexity. It may be great in the early years but how would you feel if the ECU failed putting the suspension into get-you-home mode and leaving you with a four figure repair bill? It may add to your ride but being an early adopter often carries penalties.

My 33,000 mile, 2008 Suzuki GSXR 750, the best bike I have owned in 44 years of riding, is my main transport. With an Akrapovic full system and an ECU remap, it makes 140bhp at the back wheel, which is 20 more than I need. The greatest benefit of the engine work has been to improve the mid-range performance.

I replaced Suzuki’s rubbish master cylinder with a Brembo part. 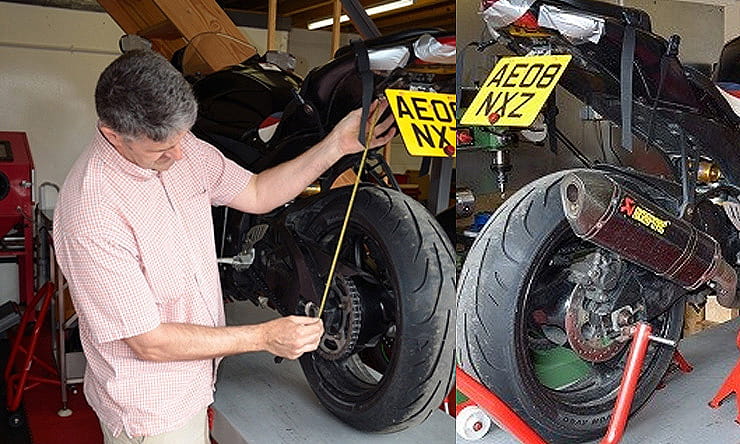 But the best aid to riding enjoyment was the addition of K-Tech fork internals and an Ohlins TTX shock. I pop the fork legs out every two years for a full service and this summer, I had the suspension set up by Gareth Evans who has been running Reactive Suspension since 2002. He has worked with many great riders like Steve Hislop, Shane Byrne, Yukio Kagayama and Chris Walker.

After first checking that my cosmetically challenged GSXR was mechanically sound (it gets used 12 months of the year), Gareth set about sorting the static sag. Taking suitable measuring points front and rear, static sag is the difference between the suspension at full extension (wheels off the ground) and the suspension taking the weight of the bike.

The aim is to get the static sag close to 10-12mm at the rear and 25mm at the front. The sag is altered by adjusting the spring preload in the forks and the rear shock.

That done, he got me to sit on the bike to measure the dynamic sag. That's the difference in measurement between the bike unladen and the bike with the rider on board. This needs to be as close as possible to 35mm at both ends. If the measurements are a long way out, you will need a change of springs to bring it into range. Mine came out at 37mm front and 32mm rear – near enough. 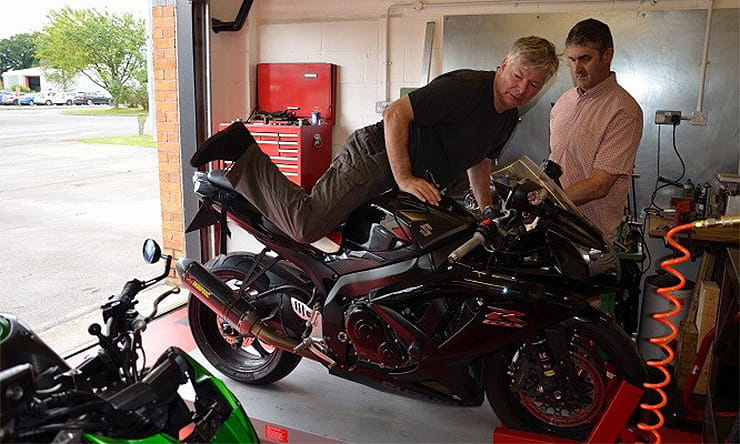 The final task was to set the compression and rebound damping at either end. I had the front set too soft and the rear too hard. The front was pitching under braking and the rear was wallowing out of corners as the forces which should have been absorbed by the suspension were being passed straight to the rear tyre.

On track the difference was significant. I had more confidence and control braking, turning and accelerating. The same settings felt great on the road too but Gareth gave me some alternative settings if I wanted to soften it off a bit.

Would I trade this bike for one with semi-active suspension? No. The static system is good enough for me and the technology is not yet available on the smaller capacity sports bikes I prefer. Aftermarket kits? According to K-Tech's Chris Taylor, the costs would be enormous. I'll stay old school for the time being.

Setting up a bike for track