Are motorcycles allowed in bus lanes? | The law explained 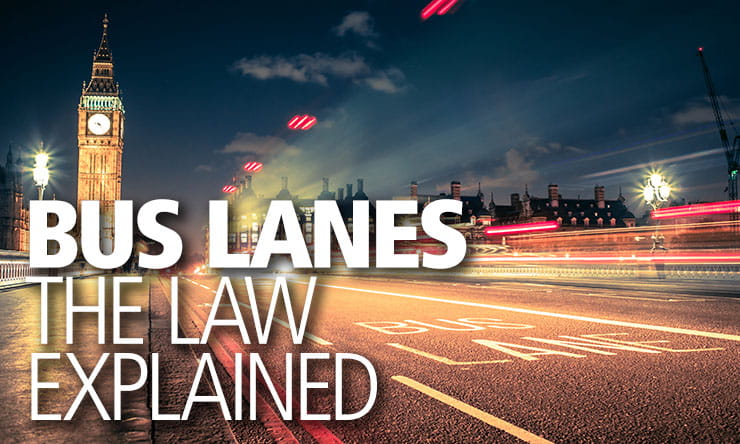 “You’re in a Bus Lane”, shouted a rider who’d pulled alongside me in Manchester. And I was.

Or was I? There was indeed a solid white line painted down the road with the words ‘BUS LANE’ in front of me, and I’d passed the blue sign that had only the depiction of a bus, a bicycle and the word ‘taxi’ to the left of the white line in the sign… There wasn’t a picture of a motorcycle.

But along with a warning of ‘Bus Lane Cameras’, there were the words Mon-Fri 7-10am 4-7pm.

It was Wednesday at 3:30pm, so the lane was open to all, but as I was on the only vehicle using it, it seemed my co-rider wasn’t alone in misreading the sign. And who can blame them for playing it safe, as getting it wrong could mean a hefty penalty in the post. Did you know though that a learner could be marked down or even fail their test if they didn’t make use of a bus lane when they could?

Where does a bus lane start?

There will be a dashed line on the road that will turn into a solid line to divide the bus lane from the normal lane. There’ll also be a blue sign at the side of the road, which indicates the vehicles that can use it. If you’re entering a main road that has a bus lane, and you’re coming from a side road, there should be an information sign in white (not blue) that will tell you that a bus lane operates in that direction. As you enter the main road there should be a blue sign with all the information on it. 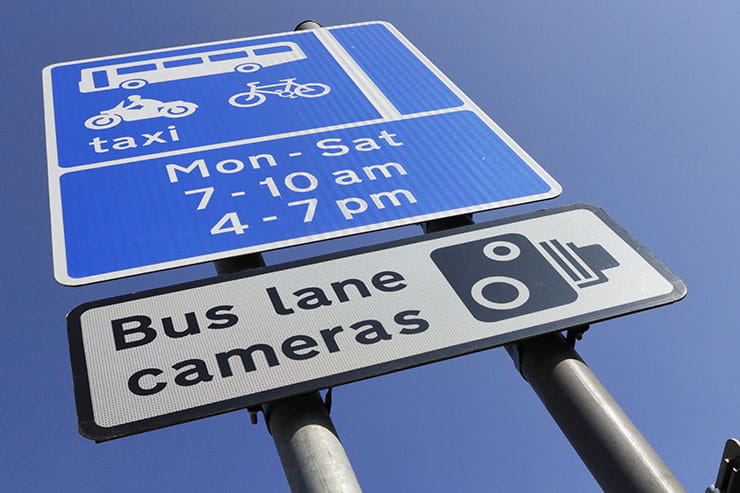 Are bus lanes in operation all the time?

The blue sign that shows the status of the bus lane will typically have the times of operation marked on it. It might say – like the one for the lane I was riding in – ‘Mon-Fri 7-10am 4-7pm’, or whatever times the local authority have deemed that it should be in operation. Outside of these times it will just be a normal lane in which anyone can ride or drive.

It might however say something like ‘At all times’, which means it’s always an operational lane. Or it might not show a time at all, in which case it’s also operational 24hrs a day 7 days a week.

Who can use a bus lane?

Because the use of a bus lane is controlled by the local authority for that area, they control who uses it. Don’t assume that motorcycles are allowed in them all – they’re not – and even if one bus lane allows it then another nearby might not.

It’s best to check with the local authority to see if they allow motorcycles in the bus lanes in their area. There’ll be a page on the website detailing where, when and how the bus lanes operate, but it’s not consistent across the UK.

What are the penalties for using a bus lane?

Again, it varies across the UK. Outside of London you can expect to pay £60 if you stray into an operational bus lane that doesn’t allow motorcycles, but this is reduced to £30 if paid within 14 days. On the other hand, it can go up to £90 if you don’t pay within 28 days.

Inside London, bus lane fines start at a whopping £160 (reduced if you pay early). But on a plus side, Transport for London (TfL) has allowed access to motorcycles on bus lanes on most red routes in the city.

Penalty Charge Notices (PCN’s) are issued by the local authority, although don’t confuse them Parking Charge Notices, which are PCNs sent out by private groups and concern parking on private land.

In order to enforce a Penalty Charge Notice, the local authority can eventually instruct bailiffs to recover fines, which of course adds even more costs to the original fine. It can get expensive.

As it’s a civil matter, you won’t receive points on your driving licence in the UK. We shouldn’t confuse the offence of being in a bus lane by crossing the solid line into it, with the double white line offence outlined at Rule 129 of the highway code, which is a separate matter that can attract three points and a £100 fine. 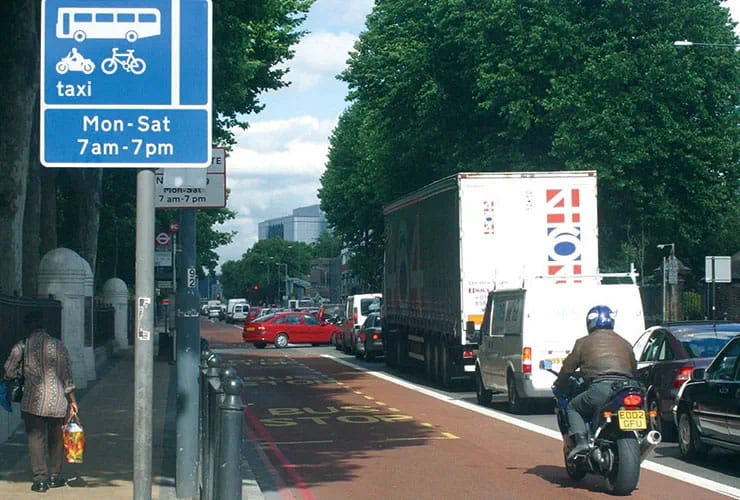 Who is liable to pay a fine?

Penalty charge notices are sent out to the registered keeper of the vehicle and it’s the registered keeper who is liable to pay the fine, so if you lend your bike to a mate and they get caught on camera then the fine is coming back to you and it’s up to you to get them to reimburse you. The keeper can appeal the notice if it was a hired motorcycle, for example, or the motorcycle was stolen at the time.

When can you cross the solid white line into a bus lane?

You can’t cross the solid white line into a bus lane, in a prohibited vehicle, during the lane’s period of operation, except in certain circumstances…

Shouldn’t motorcycles just be allowed into all bus lanes?

MAG (the Motorcycling Action Group) has been running a petition to make access to bus lanes by motorcycles a default position, however this was answered by the government who stated that it was case for individual local authorities who, as we can see, have differing views on the subject…

Manchester City Council, which doesn’t allow motorcycles in its bus lanes, states on its website that “Bus lane enforcement ensures the free flow of traffic across the city and is mainly used in areas where there is a traffic congestion issue or a problem with bus lane abuse.”

Liverpool City Council, which doesn’t allow motorcycles in its bus lanes, states on its website that “Drivers who ignore bus lane signs increase congestion and cause delays for public transport users.”

TfL (Transport for London) states on its website that “Allowing motorcycles in red route bus lanes provides consistency for riders, avoiding confusion and unnecessary risk. It presents no significant safety issues for other vulnerable road users. Other benefits include reduced motorcycle journey times and fewer carbon dioxide emissions. It also contributes to Vision Zero, working towards the elimination of road traffic deaths and serious injuries. Along with reducing vehicle emissions, this is a key policy in the Mayor's Transport Strategy.”

As it’s so inconsistent across the country, you need to ensure that you know how to read a bus lane sign, and definitely check the local authority’s website of anywhere you intend to ride… it could save you a hefty fine.