Can you use a mobile phone in a car or on a motorcycle? 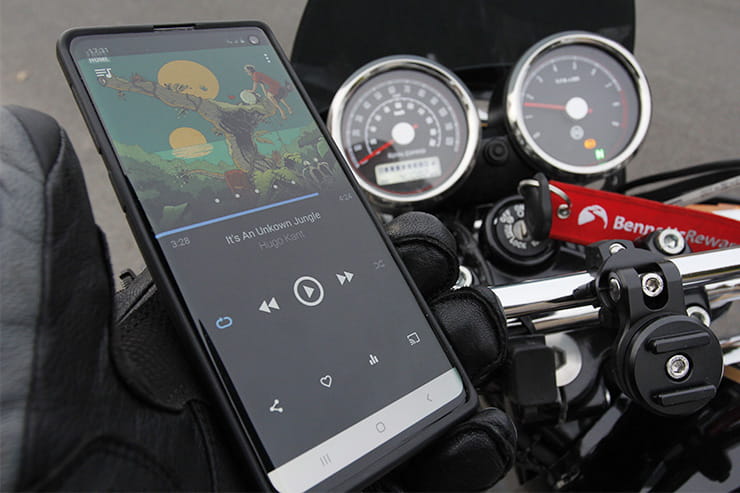 New laws around using a mobile phone when driving came into force on 25 March 2022. BikeSocial covered the proposals way back in 2020 when the government was asking for the public’s thoughts on the proposals… the results are in and 81% of the public who responded supported plans to make it easier to prosecute culprits.

But it’s not just hand-held phones that will be the target, it’s now illegal to hold and use a phone, sat-nav, tablet – or any device that can send or receive data – while driving or riding a motorcycle.

When the mobile phone law applies

For driving a car or riding a motorcycle (or trike, quad etc for that matter) think of not only what you would usually term as ‘driving’ or ‘riding’ being moving along the road, but know that the mobile phone law also applies when you’re:

These are all classed as driving.

So how did these new rules come about? Well, the old driving while using a mobile-phone laws came into being way back on 1 December 2003, but in 2017 Ramsey Barreto was driving past the scene of a collision in Ruislip and was prosecuted for filming the incident on his mobile phone. He appealed the conviction, and in 2019 that appeal was upheld in the high court, which found that as he was using the camera – a standalone feature – and hadn’t been using his phone as an interactive communication device.

It was a loophole that had been exploited by people who couldn’t be bothered to put their phone in a cradle or had to film the aftermath of collision because, you know, “social media mate”, and the facts were that the law was unable to keep up with the fast-changing pace of technology.

I can’t remember which mobile phone I had in 2003 but I know it didn’t have social media on it. Facebook and Twitter were still a couple of years away, and my device didn’t have a sat-nav on it either. I used it for making voice calls (remember them?).

Still, a lot of people didn’t seem to care, and the sight of a driver on their phone did become a bit of a common place thing, which irritated an awful lot of people.

Using a hands-free phone when driving or riding

Launching the new updated rules, the Transport Secretary Grant Shapps said “I will do everything in my power to keep road-users safe, which is why I am taking a zero-tolerance approach to those who decide to risk lives by using their phone behind the wheel.

“I’m ensuring anyone who chooses to break this vital law can face punishment for doing so and we’ll continue our efforts to ensure our roads remain among the safest in the world.”

With the new rules it’s important to remember that this legislation is aimed at drivers and riders who will physically hold their phone whilst driving or riding.

So virtually everything you can do with a handheld mobile phone while you’re driving or riding is illegal under the new rules, and the meaning of ‘using’ a phone is expanded to cover the following:

There are a couple of exemptions, which include using the phone for an emergency call to 999 or 112, or using it to make a contactless payment at a drive-through restaurant etc. The proviso for the contactless payment is that the vehicle must be stationary and the driver or rider must be paying for goods or services that are received at the same time or after the payment is made.

In reality, drivers or riders shouldn’t be touching their phone while driving or riding, and even when the phone is being used in conjunction with any of the above, drivers and riders must be careful to avoid a charge of ‘Driving Without Due Care’, ‘Careless Driving’ or even ‘Dangerous Driving’. Those offences are all covered under the Road Traffic Act and the penalties are higher.

There’s a similar law if you’re in Northern Ireland, which you can find details of here. 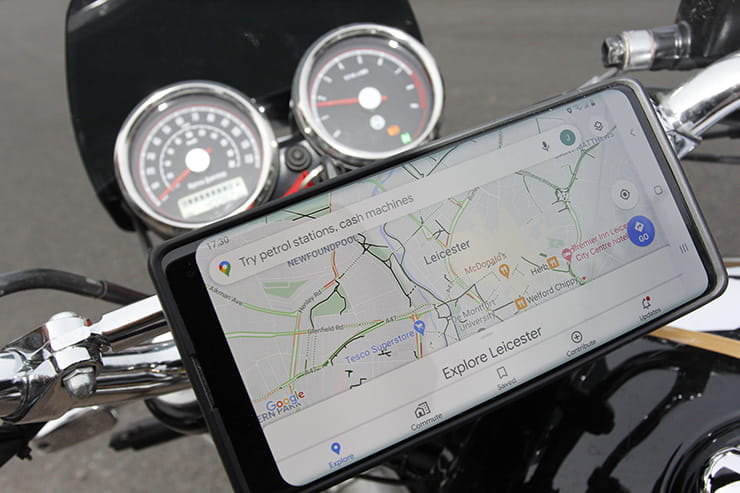 Can I use my sat nav or phone when it’s mounted in a cradle?

Remember, this legislation is aimed at those who drive or ride while holding their mobile phone, not when it’s mounted in a cradle.

Can I text while the phone’s in a cradle?

I’d imagine that’s a really difficult thing to carry out, and to do so would mean that a lot of your attention would be required. That would mean you’d be driving without due care. Some would say it was careless to be driving or riding like that, while some would say it was outright dangerous. Either way, there’s a law to cover it already and the new legislation is aimed at those who are holding their phone or similar device while they are driving.

Can I select a playlist or a speed dial when the phone’s mounted in a cradle?

See the above answer which is the same answer to a lot of these questions.

What about cyclists on their phones?

It’s important to recognise that the new legislation is intended to provide further safety for road users pedestrians at risk from inattentive drivers and riders.

Editor’s note: This isn’t the platform to go into the intricacies of how road laws might affect mobile phone use, but cyclists are of course not exempt; unfortunately, social media is leading to some rather biased arguments. For background, under the Road Traffic Act of 1988, a cyclist can commit an offence of ‘Dangerous cycling’, whereby their riding falls far below what would be expected of a competent or careful cyclist, and where it would be obvious to a competent or careful cyclist that riding in that way would be dangerous.

They can also commit an offence of ‘Careless and inconsiderate cycling’, which is riding a cycle on a road without due care and attention, or without reasonable consideration for other persons using the road.

Can I make a start a call then put the phone back in its cradle?

Making calls, or at least dialling a number before placing a mobile phone back into a cradle or back into a pocket to continue a conversation via a comms system whilst stationary at traffic lights, is something I’ve seen both car drivers and motorcycle riders do. That’s illegal and it always has been.

Can I use my phone as a sat-nav?

If you have the device in a cradle, remember that the new legislation applies to handheld devices, though as stated earlier, any interactions that are deemed to be leading to dangerous or careless riding or driving, or a lack of attention, could still lead to a prosecution. It’s still your responsibility to not be distracted from the road by any device, so while the law specifies not fiddling with a phone to select destinations, scrolling through playlists or even writing a text or email while it’s in your hand, you could still face prosecution for driving or riding without due care and attention when the phone is in a cradle if you’re doing anything much more than a short tap to change route or click ‘answer’ to a call, for instance.

Ultimately, the Highway Code has, and will continue to point out that using a hands-free telephone or similar device is safer when you’re parked.

Any interaction with a handheld phone – like quickly taking it out of a pocket to check the time while stopped in a long line of traffic or at traffic lights – will incur the full penalty of six points and the £200 fine and, as we said earlier, being stopped in a traffic jam is classed as driving or riding.

How the law affects new drivers or riders

If riders or drivers have held their licence for less than two years – and I’ve seen more younger scooter riders than big bike riders whip their phone out at the lights – then that means they’ll lose their licence as they will hit six points at the first offence and must retake a test.

The new law is actually really good news for us motorcyclists, a piece of work carried out by ROSPA showed that 64% of collisions involving motorcycles in 2016 occurred at a junction.

Think about junctions and a small queue leading up to it; how often do you see car drivers with their heads down looking at their phones and not paying attention to what’s going on? Almost every time the traffic stops, the heads go down, then the queue moves without them noticing, and when they notice that they haven’t been paying attention to the road ahead they’re all rushed to get a move on, all the time while not paying full attention.

The police often rely on footage sent into them by other motorists, cyclists or indeed motorcyclists to secure convictions. They receive a video without context and as they weren’t there at the time and didn’t speak to the driver, the police have no way of knowing what the device was actually being used for. Now there’s no get-out clause for those who From now on, a simple video or photo of a driver touching their phone will be all that’s required to complete the offence. It’s a huge problem, exacerbated by some people who have no fear of being caught and can’t leave their phone alone whilst driving.

Nomophobia is a thing (look it up) among people afraid to be without their mobile phone, so it’s good news for motorcyclists as it should sort out some of the more inattentive people out there.