Rider skills: Is it illegal to undertake? 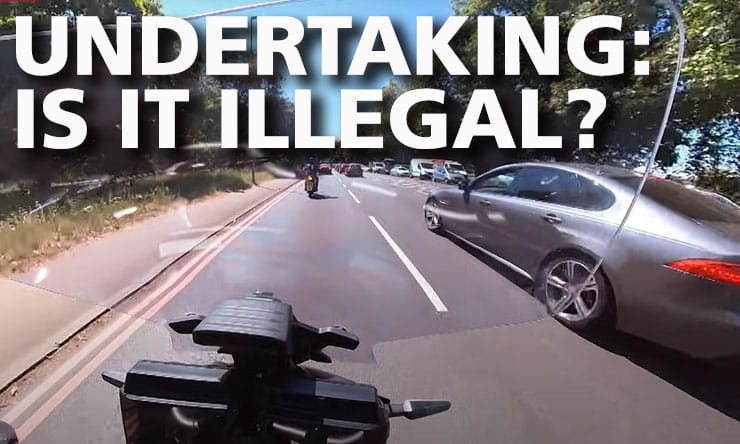 Can you undertake? Well, yes and no, but first let’s take a look at the definition is for undertaking in the UK:

To look at undertaking, we must look at overtaking and in the Highway code its covered at rule 267 where it says Do not overtake unless you are sure it is safe and legal to do so. Overtake only on the right. It reinforces it in the very next rule, 268, where is says Do not overtake on the left or move to a lane on your left to overtake.

Do not overtake on the left is self-explanatory, don’t do it even though it’s irritating when you are doing the right thing and riding along lane one at the speed limit and you encounter somebody hogging lane two at 55 MPH.

Moving to a lane on your left to overtake can best be described as the scenario where lane three of the motorway is moving at less than optimum speed and people in that lane decide to use a clear lane two to pass the car in front. The highway code says what it says though, and in doing that manoeuvre a driver or rider could be left in a position where they could face charges of careless or inconsiderate driving. Of course, in both of those situations the driver in front could be guilty of inconsiderate driving. Have a look at the criteria that needs to be completed for careless and inconsiderate driving and see how easy it is to fall into it. 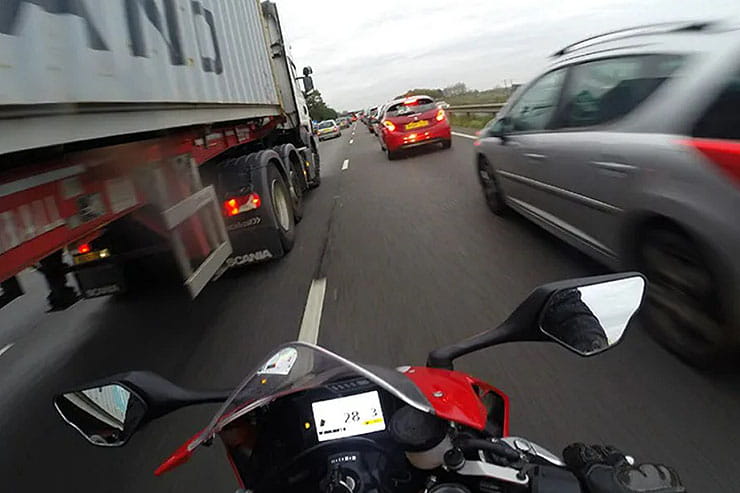 What does the law say?

Sec 3 of the Road Traffic Act 1988 which covers Careless, and inconsiderate driving says,

If a person drives a mechanically propelled vehicle on a road or other public place without due care and attention, or without reasonable consideration for other persons using the road or place, he is guilty of an offence.

A person is to be regarded as driving without due care and attention if (and only if) the way he drives falls below what would be expected of a competent and careful driver.

In determining for the purposes of the subsection above what would be expected of a careful and competent driver in a particular case, regard shall be had not only to the circumstances of which he could be expected to be aware but also to any circumstances shown to have been within the knowledge of the accused.

A person is to be regarded as driving without reasonable consideration for other persons only if those persons are inconvenienced by his driving.

So, it’s really a two-part offence where to be considered for the careless aspect of it, the driving, or riding in our case, must fall below the standards of what would be expected of a careful and competent driver or rider.

The inconsiderate part has a different level of proof in that it only requires that the driver inconvenienced someone else however, undertaking, or overtaking on the inside at the Crown Prosecution Service call it, is specifically mentioned by the CPS as being a case of Careless Driving.

When is overtaking on the left allowed?

While that deals with multi lane carriageways and motorways quite nicely there’s still situations that evolve around urban riding. A different set of skills to the motorway which we showed in this video when we took a BikeSocial customer around central London for the day:

Motorcycles, though, are great in the city. Nimble and manoeuvrable it’s so easy to make ground and complete your journey effortlessly in a busy city.

If we look at the scenario where a car is making a right turn into a side road, then are we allowed to overtake on the left? If the car is stationary, indicator on just waiting to complete its turn and there is a space that a motorcycle can fit through then why wouldn’t we take advantage of our agility?  But we’ve got to be sure that its safe, not just for us but everyone else. We definitely can’t do it if there’s a cycle lane to our nearside and in passing the car, we have to cross the white line into the cycle lane. There’s lots to look at and as we’ve seen it’s really easy to fulfil the criteria for careless and inconsiderate riding, but I wouldn’t be overtaking moving cars on the inside if I only thought they were slowing down to turn right. Each case gets taken along with its own circumstances, but the penalties can be quite high.

What are the penalties for undertaking?

Expect a driver awareness course if your eligible and it a low-level matter or a fixed penalty notice if you aren’t eligible for the awareness course. The fixed penalty will come with three penalty points and a fine of £100 however if you get charged with careless or inconsiderate driving and it can amount to as many as 9 penalty points, a fine of up to £5000 or a discretionary ban.

New riders who get six points on their licence in the first two years after their test must take a retest but riders with more experience who might have 3 points already on their licence could reach 12 points if they are found guilty at the more serious end of the scale. If those 12 points have been accrued in the last three years, then there’s a mandatory 6-month ban.