VIDEO: How to pass your motorcycle test!

I’ve always wanted to take my bike test, but with the cost soaring, finances were never on my side. As the only person in the Bike Social office without a full licence, I was often subject to a good old ribbing, so as soon as I could, I booked an appointment with the BMW Rider Training School to get myself on two wheels.

I’d already done my CBT and from previous experience I knew riding was for me, but with a fairly long daily commute a 125cc bike just wouldn’t cut it for me. I needed to be able to ride something with a bit more power.

At 23 years old with no licence, under the new licencing rules I could take the A2 motorcycle test, which limits riders to machines making a maximum of 47bhp. That may sound like it’s not much, but a 47bhp motorcycle is more than capable of 100mph, which is more than enough for a new rider as far as I’m concerned!

Introduced in 2009, the new style motorcycle test comprises of two key parts: Module 1 and Module 2. Focused on slow speed control, Module 1 is taken off road and involves a number of manoeuvres. Module 2 sees you taken out on to public roads to assess your riding.

A prerequisite of taking your motorcycle test at any level is completing your theory test (yes, even if you’ve done it for your car licence) and Compulsory Basic Training (CBT). If you’ve not done your CBT then don’t worry, a lot of training courses, including the one I did with BMW, offer CBT options. 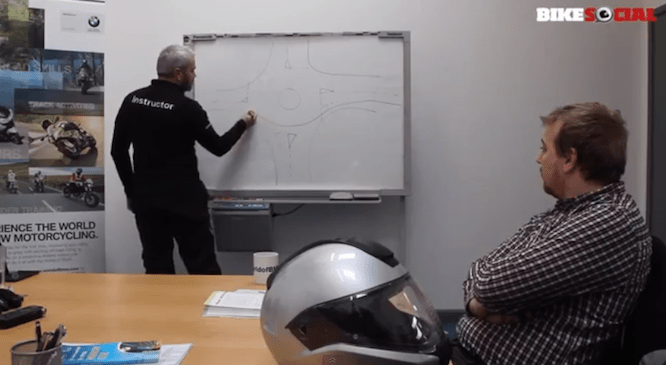 Before you begin any rider training course, you should be aware that there will be some sort of classroom element. A large part of this is covered in your CBT, but even if you’ve passed your CBT previously, instructors tend to take you through it anyway just so they can be sure of your knowledge before letting you out on the public road under their control.

I didn’t really know what to expect heading in to my week-long training course, which would feature both parts of my A2 motorcycle test. If you don’t pass Module 1 you cannot take Module 2 so the pressure was on!

Module 1 has had some really bad press over the years and all I’d heard prior to the test was people saying they didn’t know what it was or even worse, ‘oh it’s really hard’. It really isn’t. I found it quite tough to begin with but when I got into it, it really clicked.

Without a doubt, slow speed control is a difficult part of learning to ride but it’s absolutely vital to your safety, as it gives you a clear understanding of how you can maintain control of the great lump of metal between your legs.

The Module 1 test has seven components, or tasks, and in the real world it takes about ten or 15 minutes to complete. It’s all off-road, on specially built areas of tarmac at the test centre. When first approaching these areas, they look quite complicated as there are cones scattered all over the place, but once you get your head around the structure of the test it’s actually quite simple. 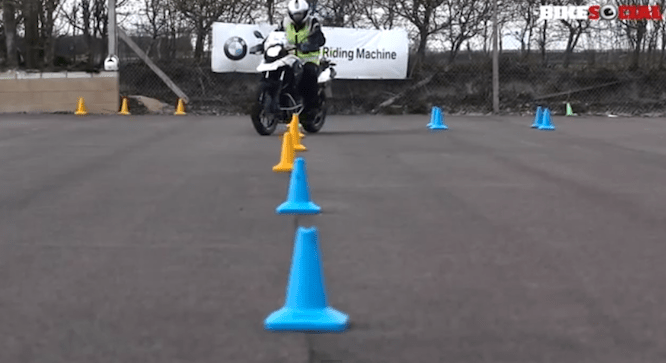 Your first job is to ride into a marked parking bay before getting off the bike, and walking it into the adjacent parking spot. This is a quick, simple test to make sure you can be in control when moving your motorcycle on foot.

Before starting the test, the examiner will tell you to treat the test as you would if you were riding on the road. Without any road surroundings and safe in the knowledge that there’s no immediate danger, it’s very easy to forget your observations. Don’t. Each time you fail to make your observations before setting off counts as a minor fault and you’re only permitted to make five minor faults during the test.

After parking up, you’ll then be asked to get back on the bike and slowly slalom through a row of cones before completing two figures of eight around the final two cones. This sounds really daunting and it does take some practice.

It’s all about clutch control and understanding how to use the rear brake. If you’re going too fast, a dab of the rear brake can slow you down. If you lose your balance, releasing the clutch can straighten you up.

The key is to do it as slowly as physically possible, anyone can jump on a bike and whizz through a load of cones but are they in control? Probably not. Doing it slowly demonstrates your control of the motorcycle and control is absolutely vital, as hitting one of the cones counts as an automatic fail.

Ending your slalom with a couple of figure of eight shapes is initially quite difficult, but what the examiner won’t tell you is that you can go as wide as you want. Don’t worry about being neat; just worry about being in control.

I struggled with this part early on in my course and the instructor noticed. After an afternoon riding on the road, he made me ride straight to the paddock area to do a slalom and figure of eight. I did it first time and didn’t doubt myself after that.

Your next task will be to perform a U-Turn, which is fairly self-explanatory; turn the bike around within a couple of white lines as if you were doing it on a road. Despite being able to do a perfect U-turn, most people find themselves marked down on this part as they forget their observations before setting off.

That’s concludes the slow speed part of the test but you’re not done yet. 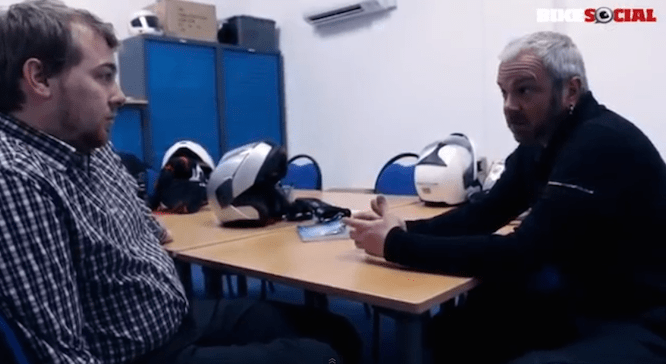 In the next part, you have to complete three manoeuvres from a road-like speed. To achieve this speed you’ll ride to the bottom of the tarmacked area before riding back down towards the examiner, through a speed trap and then performing your manoeuvre. The first is to simply come to a controlled stop within a given area. The second is to perform an emergency stop, stopping as quickly as possible, when the examiner puts their hand in the air and the third is to swerve around a set of cones as if you were avoiding something stepping out onto the road.

The minimum speed accepted is 48kph, (29mph) although you will get a minor fault for being under the 50kph (30mph) required. There is no upper limit and you will not be penalised for going faster as long as your manoeuvre is conducted in a safe and appropriate manner. A little nervous, I managed to go through the speed trap at 71kph (44mph) on my emergency stop! Fortunately I managed to stop the thing and escaped with nothing but a stern look from the examiner.

It’s over before you know it. The BMW Rider Training School have their own tarmac area for you to practice on, but also hire out the test centre for the afternoon prior to your test. This practice is essential as it enables you to understand what’s coming and more importantly, shows you that you can do it. No excuses! 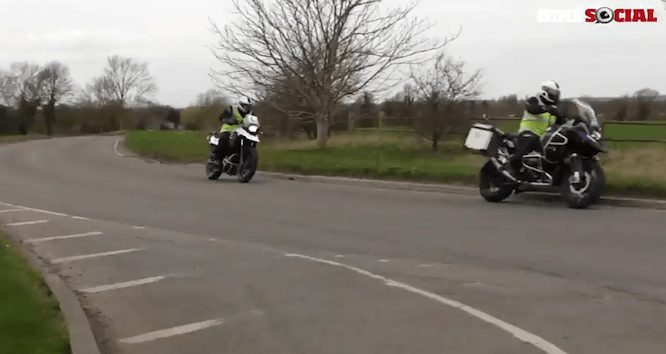 On my way to the training school the day before my Module 2 test, I was absolutely bricking it. I was convinced we’d spent so much time on Module 1 that I’d never be ready for the next part in just one day.

However, this isn’t the case. Alongside your Module 1 training, you’ll also spend a lot of time on the road. During this time your confidence riding will be increasing steadily, even if you don’t notice it. The more experience you have on the road, the more situations you come across the more prepared you are for Module 2.

As with most kinds of tests or exams, before doing the actual test you will do a number of mock tests. These are great for confidence; if you know you’ve passed three mock tests you feel a hell of a lot better going into your actual test.

In essence, the Module 2 test involves 35 minutes of riding on a route set by the examiner, dictated to you through a one-way comms system. It’s not too dissimilar to a driving test, but you feel much more on your own as opposed to having an examiner breathing down your neck in the passenger seat.

You will receive instruction to pull over at four times during the test. One to show you can pull away from the side of the road slowly, another to show you can pull away from behind a parked car safely, another for a hill start and finally so you can begin an independent ride, in which the examiner will tell you to follow road signs to a particular area.

This sounds really daunting, but it’s not. In reality, you will only ride without instruction for three or four minutes and what many people don’t realise is that taking a wrong turn is absolutely fine – you aren’t being marked on your navigational skills. If you’re asked to follow signs to Peterborough and take the wrong exit at a roundabout, as long as you ride in a safe manner the examiner couldn’t care less. 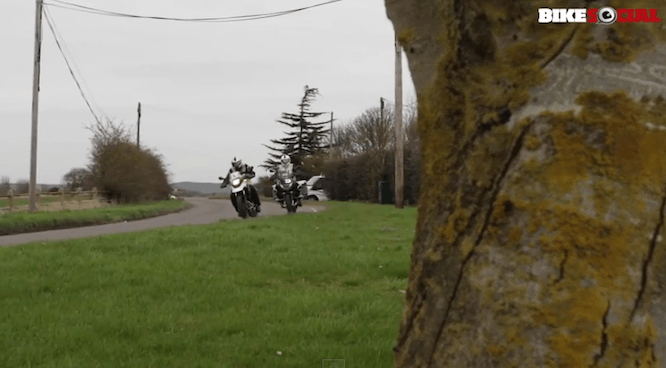 Keep calm and pay attention throughout the ride, even if you’re convinced you failed in the first couple of minutes. I stalled within the first five minutes of my ride, simply because I selected the wrong gear coming out of a mini-roundabout. I quickly restarted the engine and managed to carry on without coming to a stop, but I really thought I’d failed. All I got for it was a minor fault; in fact, the examiner commended me on my recovery of the fault.

I thought the entire test had been tough, I was sure I’d waited too long before pulling out of a junction, had run too close to a car in front and overtaken a truck when wasn’t sure I should have. None of this came up. I passed with just the one minor fault from that slip up at the mini-roundabout.

Doing my bike test was one of the best things I’ve ever done. I’m already hooked and making plans to ditch the Vauxhall Astra to do my daily commute on two wheels. 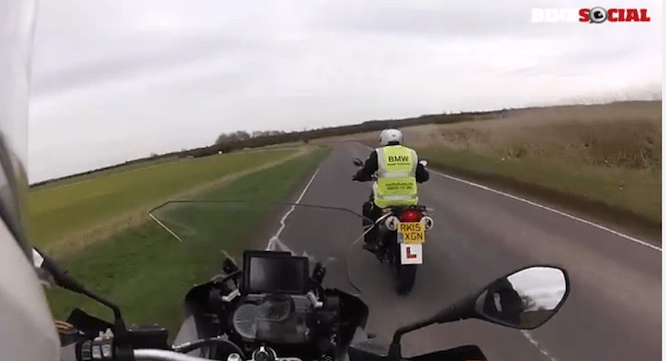 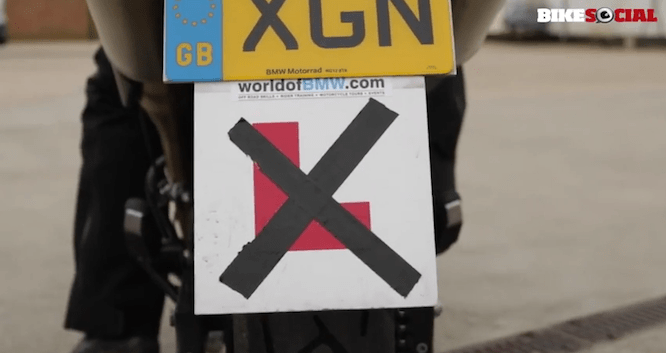 If you’re between the ages of 19-23, you qualify to be able to take your A2 category motorcycle test, which allows you to ride bikes up to 47bhp.

In a move to encourage more youngsters to get on two wheels, BMW’s Rider Training School is offering pupils who take their A2 course a free upgrade when they’re old enough to do their full, unrestricted A category test, saving you in the region of £500!

Why wait until you’re 24? Get on two wheels now!

BMW’s Rider Training School is based in Royston and run by Chief Instructor Ian Biederman, who has over 25 years teaching experience. The school runs a fleet of brand new BMW machinery, starting with the A2-category compliant G650GS and moving all the way up to the likes of the R1200RT and R1200GS Adventure for advanced courses.

Find out more at www.worldofbmw.com.