Is there a fuel shortage in the UK and can you store petrol at home?

This week has seen queues at filling stations and some pretty scary images of people filling anything up with petrol – including plastic drinking water bottles – but there is no fuel shortage, just a shortage of common-sense.

With petrol seeming to be the new toilet-roll, what does the law say about storing fuel at home? Dave Yorke is an ex-Merseyside motorcycle police sergeant and explains what’s safe and legal…

I first came across the regulations for storing petrol at home when we were running a bike in the British Supermoto Championship; we wanted to make our race days a little easier and didn’t want to be filling up containers for the race bike on race day.

We also wanted to be safe at home and in the end I never bothered; it just wasn’t worth the risk of having a highly flammable liquid anywhere near my family, so we added a few minutes on race day to fill the approved container.

I also used the guidance around the storage of petrol when I was targeting the anti-social bunch who were storing bikes and petrol cans in their houses before riding them around the area; I found that this was often against their tenancy agreement and was another way to keep up the pressure on them. It meant that when we found a bike in a house or flat, we could work with their housing associations to make sure that everything remained safe for other residents.

With the army reportedly on standby to deliver fuel across the UK after a surge in people panic-buying petrol and diesel amid the current ‘plenty of fuel but no fuel’ crisis, what is the guidance on keeping petrol at home and – more importantly – do you need to?

Do you need to store fuel at home?

Even when we had a race bike I didn’t need to store fuel, and in every circumstance since or before that time I’ve never needed to store petrol at home.

The chances are that if you’ve never needed to store petrol at home before then you don’t need to now. I think it’s best left stored where it’s safest; in petrol stations.

Both bikes in my garage have fuel, although not full tanks, but with the Honda Africa Twin showing 56.5mpg – and the Honda CB500X showing an even more impressive 80.3mpg – we only have to continue with normal usage and buying practice.

That’s if everyone else just acts normally.

Plus, on a bike I can easily overtake the queues at petrol stations as I pass by.

Motorbikes being practical, who’d have thought it. 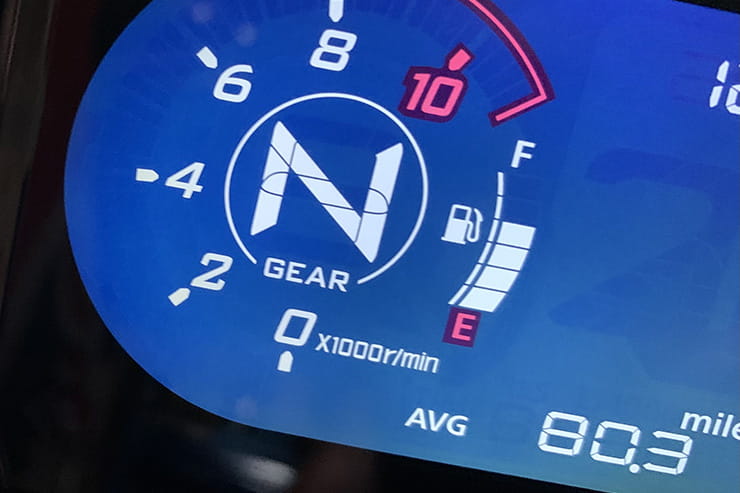 How much fuel can I safely keep at home?

From a safety point I’d say you should store as little fuel as possible at home, although we live in a world with race bikes, track-day bikes and petrol lawnmowers, so people do have a valid reason for keeping some.

However, the Health and Safety Executive (HSE) states that you can only keep up to 30 litres of petrol at home. Any more than that and you need to start informing the local Petroleum Enforcement Authority (PEA).

Don’t store fuel in your living accommodation. As I stated originally, I didn’t bother in the end as it wasn’t worth the risk, even in the garage.

What about the petrol already in my bike or car?

The petrol that is stored in your bike or car’s petrol tank isn’t included in the 30 litre limit. It’s also safe there and not in your house or flat 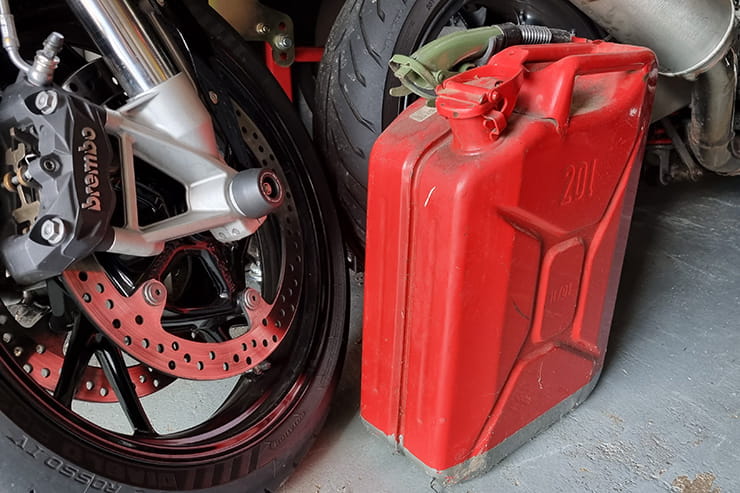 Have two of these and you’re breaking the law

What sort of fuel containers are safe and legal to use?

Keeping within the 30 litre limit, you can only store petrol in approved plastic or metal containers or a demountable fuel tank. The plastic containers mustn’t be able to hold more than 10 litres each, and the metal ones mustn’t exceed 20 litres each.

You can have a combination of the two types of containers, but you can’t exceed 30 litres.

The HSE states that containers MUST…

The HSE also demands that containers must be designed and constructed so that:

Furthermore, containers must be marked or labelled in a legible and indelible form with:

So that means that using drinking water bottles, as we’ve seen this week, is an absolute no-no, likewise for anything else that isn’t in the list above. If in doubt, don’t.

“She’s filling up the water bottles with petrol”

How long can I store fuel for?

Petrol has a very short shelf-life if it’s not stored correctly, so once it’s poured into a container it will only be good for about three to six months, or even less depending on how it’s stored.

No one who previously didn’t need to store 30 litres of petrol needs to do it now.

Petrol is expensive, but using poor-quality fuel in your bike will become even more expensive.

Can I legally fill up petrol-cans at a filling station?

Of course you can, but ask first as the staff might want to see what you’re using; they shouldn’t allow you to fill up an unsafe container. There could also be limitations due to the supply of fuel, and this could be a decision made by the fuel supplier or the station franchise holder so please don’t blame the store attendant if you’re not able to fill a jerry can.

What if I really need to store fuel at home?

Don’t store petrol at home, but if you really must, do it properly and consult the Health and Safety Executive guidance at www.hse.gov.uk/fireandexplosion/petrol-storage-club-association.htm 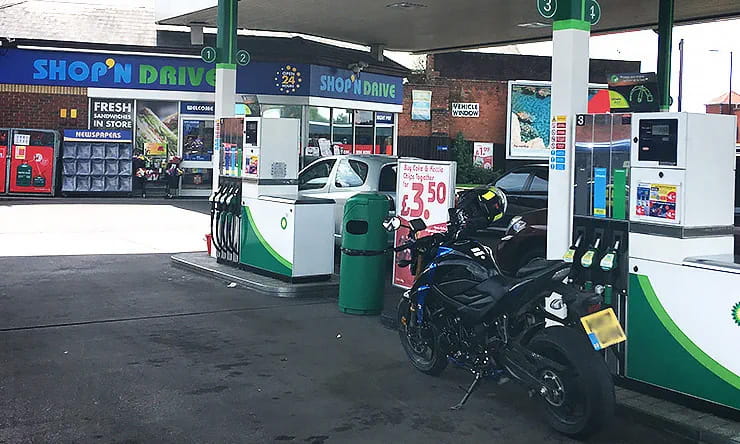 This image of filling up with fuel isn’t shocking enough to get clicks, but in a world where you have to target the most popular searches to get seen, we did have to name it ‘Fuel shortage crisis store petrol_01’

Editorial opinion: Was there ever a fuel shortage?

John Milbank, Consumer Editor of BikeSocial: “From a purely personal point of view, I’ve found the past few days to be a sickening reflection on the state of British media, and the general public’s inability to read past a click-bait headline.

“When I read the first news story discussing the ‘handful of filling stations’ that were struggling to get fuel I was extremely disappointed with the language used in the headline (‘fuel shortage’), and the photo of a closed forecourt. The story made it clear – if the reader got that far – that other stations down the road had no such problems and it was obvious that there wasn’t a national crisis. But that’s not what gets the clicks that every media outlet is so desperately hungry for now.

“As queues started to form through panic-buying, the reporting continued, with clumsily-written headlines of ‘Ministers discuss petrol driver shortages’ being used to shock. Ministers were discussing HGV driver shortages, some of whom drive fuel tankers. But that’s not as exciting.

“Even as I vent this, there continues to be ‘news’ of huge queues and struggling motorists; the stories that feed the panic. Some like to see a global conspiracy in this – some quote ‘Project Fear’ – but it’s far more simple than that; every media outlet wants to be number one, and while you can rightly blame mainstream media for this ‘crisis’, the mainstream public’s rabid desire for those click-bait headlines – and the resulting unfounded panic – is why this weekend saw many of us choosing to stay at home rather than take the family out for the day and risk getting caught up in a totally unnecessary fight for fuel. That click-bait hunger dictates the way stories are presented… it’s a vicious circle.

“The fuel ‘crisis’ will – I’m sure – soon be over, and blame is already being aimed at the Road Hauliers association (though the media refuses to acknowledge its part). Was this a cunning ploy to accelerate temporary visas for more HGV drivers? In a world where PR companies can offer to sell you space in news outlets for whatever message you want to push (we’ve been approached in the past), it doesn’t seem beyond the realms of imagination to wonder if some shouts of impending shortages are a new marketing tool; ‘We’re going to run out of trainers or pop or drumsticks… quick buy them now!’

“There is a problem with distribution and it’s hitting us all, but panic-buying isn’t helping. Nor is incitement to panic.”