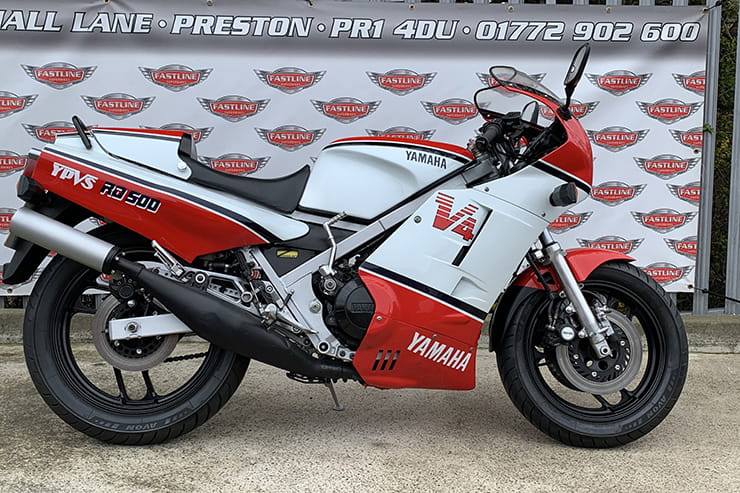 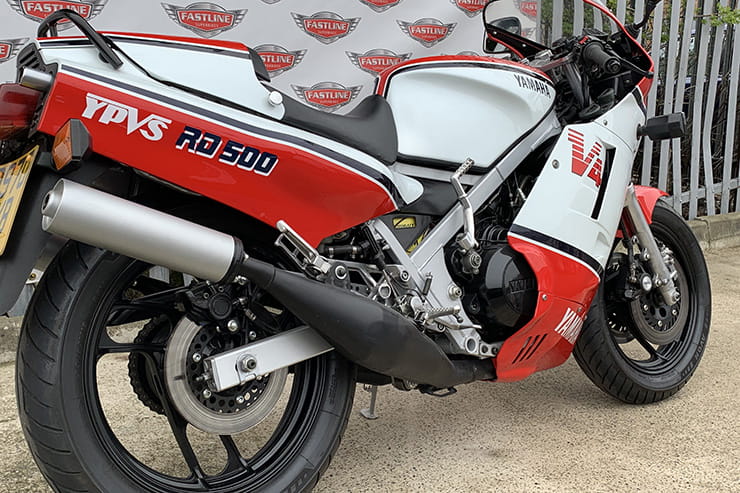 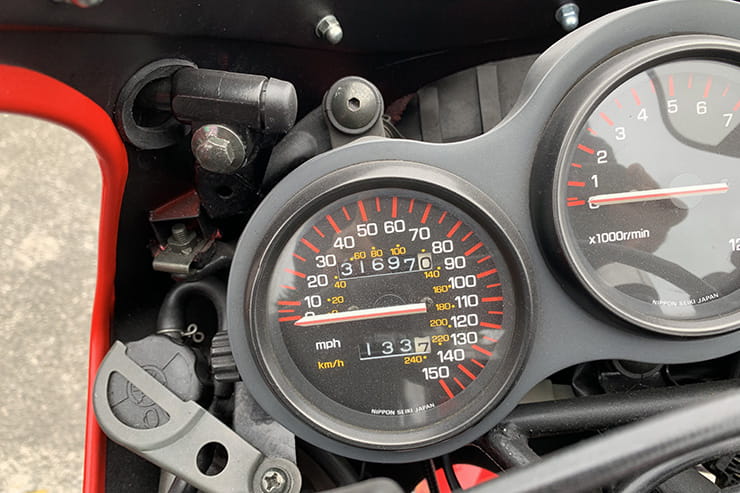 In a world of Superbike racing we’ve all become used to the idea of running a road bike that’s based heavily on the racers we watch on telly. And in the last 35 years we’ve seen a handful of ultra-expensive road legal Moto GP replicas from Ducati and Honda. But back in the early 1980s Yamaha stunned motorcycling by announcing what looked very much like a road legal version of their then-new V4 GP racer for a price that pretty much any 25-year-old rider with a full-time job could afford. Imagine the queues if Yamaha announced a road legal version of Valentino’s M1 racer, with all the gizmos for £15k at this year’s NEC show?

Back in 1984 that’s exactly what they did. Yamaha already had the lightweight two-stroke market sewn up with their LC range. The introduction of the second generation YPVS models in 1983 had cemented their dominance despite Suzuki fighting back with a water-cooled, alloy-framed RG250. Launching the V4-engined RD500 just six months after Kenny Roberts and Eddie Lawson debuted the race bike was a master stroke. Demand for the new bike was massive with all stock sold well in advance and some customers re-selling their place in the queue at well above rrp before they’d even arrived. 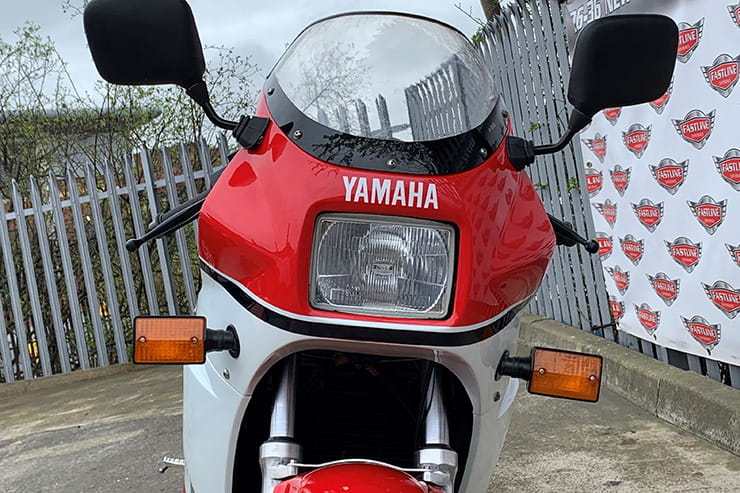 Before the RD500 only Gold Wings and BMWs had full fairings

The technology was interesting, but to be honest, pretty much every new bike at that time was re-writing the rules. The RD’s V4 motor turned out to bear little resemblance to the racer, but there was some clever thinking none the less. Kenny’s bike was a true single-crank V4, where the RD500 was essentially a pair of 250cc twin-cylinder engines, each with its own crankshaft, linked by a central mainshaft.  Yamaha’s YPVS powervalve system added low-rev driveability as did the use of reed valve induction (the race bikes used disc valves).

Sadly, most of the magazines of the day missed out on the attention to detail in getting the engine’s weight down while giving both power and flexibility. From the mating of cylinder to crankcase surfaces to the varying thickness of the casings to the cylinder castings and much, much more, there was much development of previous RD technology in the engine, all of it designed to increase port areas and gas flow while reducing weight. 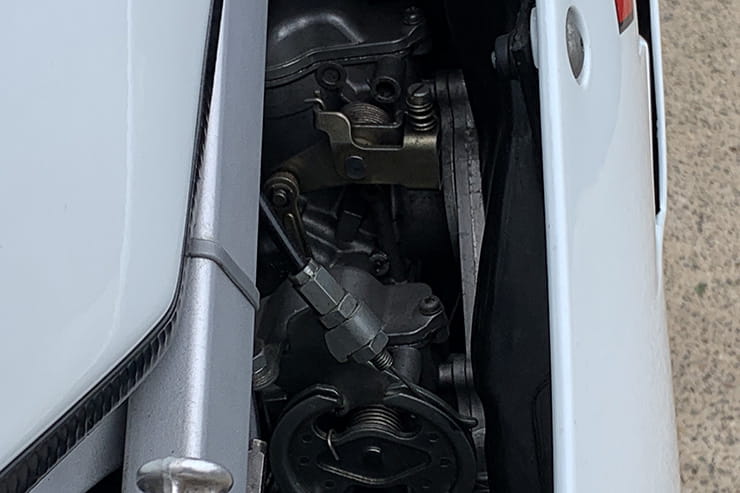 V4 layout only left room for a small airbox and inlet manifolds had a 90 degree bend. Not ideal for high-speed gasflow

The biggest problem for Yamaha’s engineers was airflow. On the race bike, without the need for air filters, the carbs could sit in the vee. But on the road bike, needing a proper filter, there wasn’t room. In such a tightly packaged bike the carbs had to be mounted on the side of the engine, which added width and needed 90 degree turns in the inlet manifolds. Worse than that, the airbox volume was dictated by available space rather than engineering efficiency, which is never a recipe for big horsepower. The result of all this compromise was an engine that claimed 90bhp, but delivered around 75bhp – around 25 per cent more than a healthy RD350 YPVS from a bike carrying an extra 40kg.

But by the time we knew that, the legend had already been built. This was a 500cc bike that had owners of Suzuki and Kawasaki 1100cc superbikes trading up by trading down. And that had never happened before. At £2999 it cost £500 more than Kawasaki’s GPz1100 and similar money to a Suzuki Katana. And because bike insurance was banded on engine capacity back then, it also cost the same to insure as a Honda CB400N Superdream. 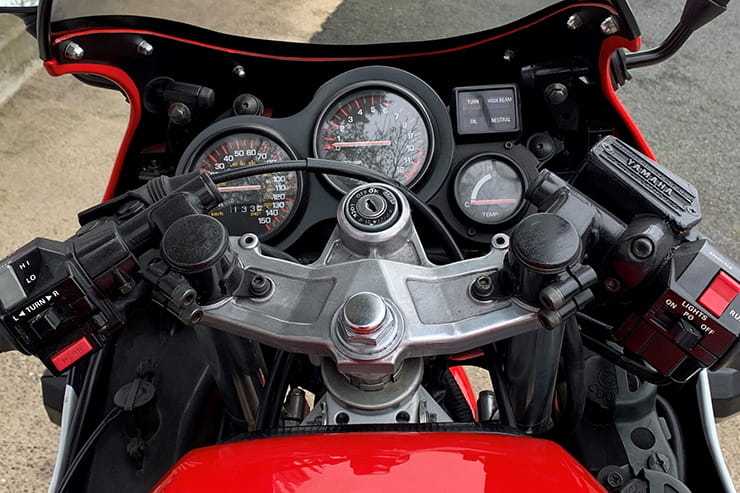 150mph speedo was only just optimistic, if they’d put the handlebars below the yokes, it might have just cracked it

On the road the RD’s relative lack of weight (50kg less than the 1100cc monsters), with a civilised power delivery at low revs and enough of that two-stroke kick up the bum when the powervalves opened to feel like something special. Rumours of 150mph top speeds may have been a tad optimistic, but the only person keeping up would be the local Tom Cruise on his also-new-for-1984 GPz900R. Some were used in production racing but without the expected success. The best two stroke tuners could get decent power from an RD500 motor, but by the time they’d worked out how, Suzuki’s RG500 had arrived and was easier to get more from.

Fuel consumption was better than you’d expect at low revs and as bad as you’d imagined when thrashed (still nowhere near as bad as Suzuki’s RG500 a year later) and starting when warm (kickstart only and a lot of girth to wrap your legs around) could be tricky, but otherwise the RD500 made a half decent everyday motorcycle (and back then, more of us used to ride our bikes every day, so that mattered).

The early 1980s were an interesting time for chassis designers. Most had realised that change was necessary, but it would be another five years before the Japanese engineers got the formula right. The RD500’s frame used square-section steel tubing (Japanese home market bikes – the RZ500R – used aluminium, saving 9kg, but were also restricted to 64bhp), but the routing of the rear exhausts meant the shock absorber had to be placed horizontally underneath the bike. 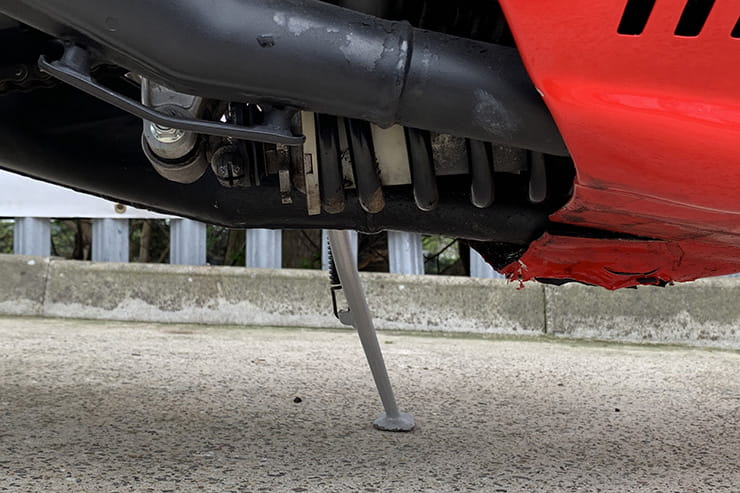 All the period chassis tech is present; 16-inch front wheel, anti-dive system on the front forks and air-assisted fork damping. Vented brake discs were also used, and a full fairing was still a rarity back then (and probably as much responsible for the impressive top speed as the claimed power output).

Handling was impressive for the time, mainly because of that enormous weight advantage over all the four-stroke competition, but tyre technology took a couple of years to catch up with the pace of chassis evolution in the mid-1980s. Radials were coming, but not quite quickly enough for the RD500. 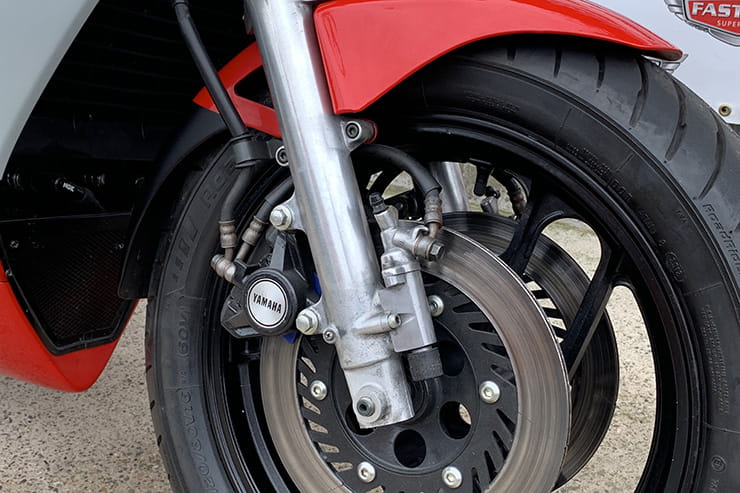 One summer later it was all over for the RD500. Suzuki’s RG500 was faster, lighter, sharper and cheaper to buy. It was also closer to the actual race bike, even if the racer was hopelessly outclassed in most series by then. As well as the RG there was also Kawasaki’s GPz600R which made the same kind of power, weighed a similar amount and, being a four stroke was far easier to live with, more economical and cheaper to buy. Chuck in Suzuki’s GSX-R750, Yamaha’s own FZ750 and Honda’s NS400R (less power, but much lighter and better handling) and overnight the RD became an also-ran.

It stayed that way for a long while too. As recently as ten years ago you could buy a tidy RD500 for around £5000. These days it’ll cost you at least double that, probably more. Typical RD prices have soared recently, and a decent example now costs as much as an RG500. If you’d bought back in 2009 at £5k, then you’d have almost trebled your stake – try doing that with an ISA.

Interestingly, if you’d bet your pension on a GPz900R as the future classic, you’d have paid £1000 or so back in 2009 and be looking at around £5k for a good one now. Even allowing for restoration and running costs, that’s a hell of a return. Still think classic bikes are dull? 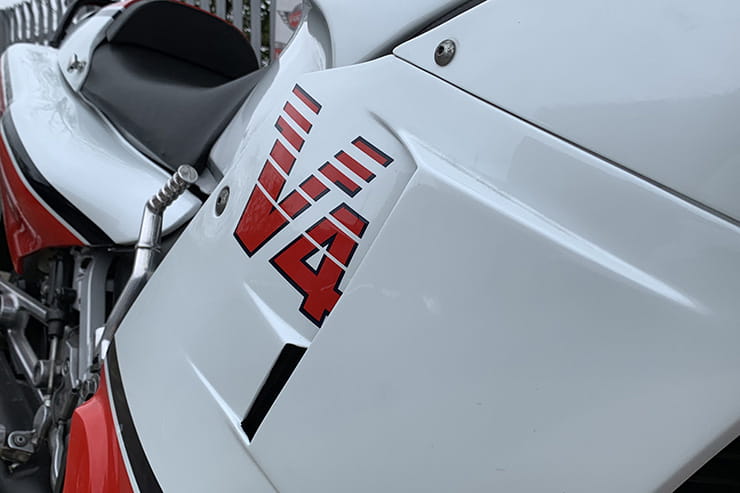 Just like Kenny’s? No, not really, but close enough for most of us