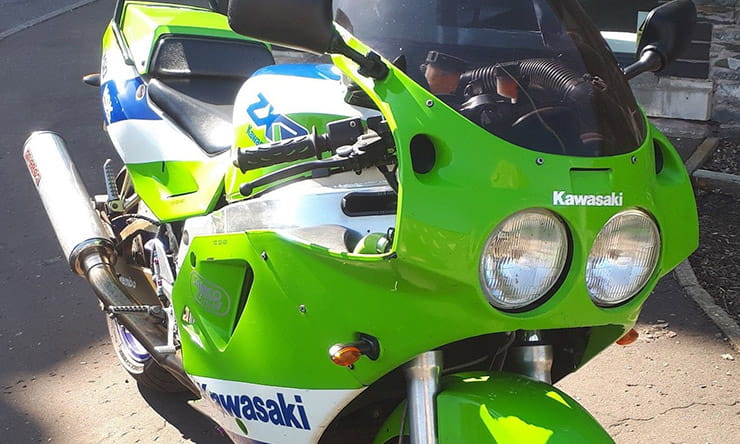 There aren’t many occasions in the history of sports bikes when a manufacturer launched a new sports bike that made the same power as the old one, weighed 10kg more and cost £1000 extra. And if there are, there’s no record of it being a roaring success.

But that’s what Kawasaki did when they replaced the ‘much better than we remember’ GPX750 with the ‘Blimey, doesn’t it still look good today’ ZXR750 in early 1989.

The ZXR’s extra mass came from a much beefier frame than the GPX, bigger bodywork and two corrugated rubber tubes providing cool air (not under pressure like later ram-air systems) to the engine. It had twice the number of dinner-plate sized headlamps and a lot more designed-in butchness, ready to cope with the additional 30bhp you’d get by fitting the race kit. Except the race kit never really arrived for the first-generation ZXR750. 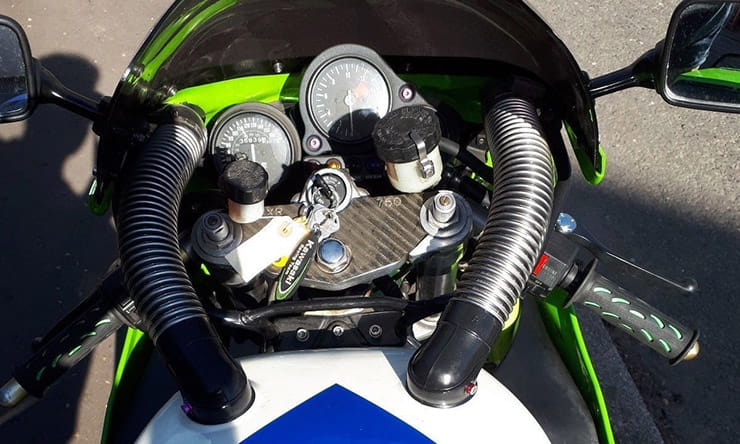 Launched into a world of fledgling World Superbike racers, the ZXR was Kawasaki’s mass-market version of Honda’s RC30 and Yamaha’s OW01. They were purpose-built race bikes adapted for the road, where the ZXR was a road bike with race ambitions.

It was 20kg heavier than an RC30, made the same horsepower, but cost an awful lot less money (£5k in 1989 compared to £9k for an RC30 and £12k for an OW01). If you measured your bikes by KG per £, the ZXR was a bargain and was pretty much affordable to any 23 year-old with a job, a permanent address and a half-decent credit score.

The ZXR looked like a Bol D’or refugee, sounded like one too as the ‘Hoover tubes’ did an impression of one of those things you blow into and twirl around your head only with the air being sucked in at 11,000rpm by a hungry 16v motor.

It was also the first Japanese sports bike to get the formula right for how modern sports bikes developed. Alloy beam frame…check. 17inch wheels with fat radial tyres…check. Funky air intakes…check. Adjustable suspension including forks, yup. Slipper clutch, got that too. Ride height adjuster…box ticked, thank you, and a stretched-out riding position with high footpegs, which was radical for the time, but now feels like the suspension has collapsed. 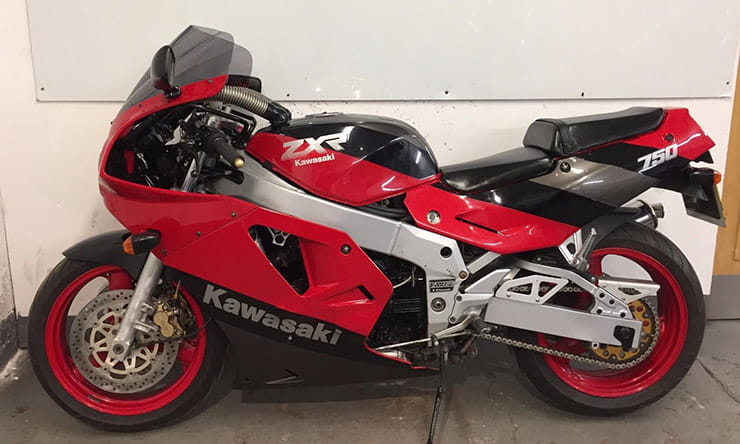 In an era when 750s still mattered the ZXR was the daddy on the road. Kawasaki sold boatloads of them and would have carried on blitzing the sales charts with the next version – the ZXR750J, one of the best-looking bikes ever - in 1991 if they hadn’t restricted it to 100bhp.

The ZXR750 also marked a dramatic shift in Kawasaki’s bike set-up strategy. Previously a big-K superbike had been fast, but softly sprung and underdamped. The ZXR, designed to work properly at a million mph with race kit fitted had suspension with stiff springs, too much compression damping (and no adjustment to do much about it) and a set-up that only really started working above 100mph. We were much younger then and, therefore talked non-stop about doing a ‘ton-thirty’ everywhere, so if the reality had matched the borrox the ZXR’s suspension would have been fine.

Sadly, it didn’t work that way on the Garforth-to-Middleton bypass and most ZXRs spent their best years with suspension being barely troubled.

No one ever explained why the ZXR race domination failed to happen. Our best guess is that the CV carbs (which had to be homologated for superbike racing) couldn’t flow enough fuel and air for a race-kitted engine and, interestingly, when Kawasaki did finally launch an SP race version - the ZXR750K - it had flat-slide carbs fitted. 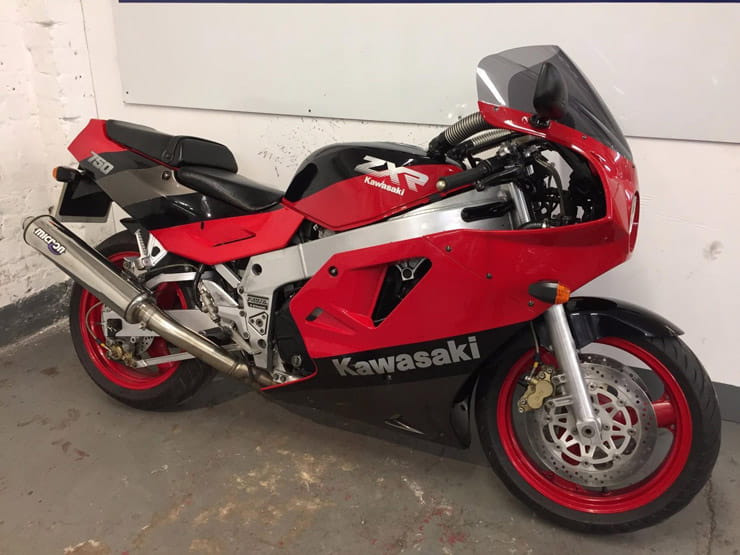 Time was kind to the early ZXR750 though and prices for used ones held up long after the equivalent Suzukis and Yamahas had dropped away. Prices finally dropped to around £1000 about 15 years ago and have been bumping along the bottom ever since. But they’ve started to rally of late and, if you can find a genuinely good example, you’ll be parting with £2k-ish to own it.

Other than age-related wear, there’s nothing specifically that goes wrong, although at almost 30 years old, there’s an awful lot of stuff covered by the term ‘age-related wear’. Essentially it’s a tough motor in a strong chassis, but suspension and brakes will be well-knackered by now, as will carbs. Plastics will be brittle and the fuel tanks rust when not used like most bikes of the time. Electrics will be suffering, wiring brittle and all the chassis bushes and bearings will all have some slop in them after 30 years neglect.

In other words, look for evidence of money being spent to replace and revive. Your immaculate-looking ZXR will need plenty of time and money to bring it back up to spec. Check the engine and frame numbers also, ZXR’s were a part of the ‘great bike theft problem’ of the early 1990s and many were stolen and given new identities. Once done though, with the right pipe, fuelling sorted and a few suspension updates, you’ll be surprised how enjoyable a ZXR can be. It revs slowly by modern fuel-injection standards, steers slowly too, needing some real muscle or serious hanging off to get around a corner. But you’ll be surprised how stable it feels once over. This motorcycle is the link between old-school superbikes and what we ride today. And prices will continue to rise...slowly. 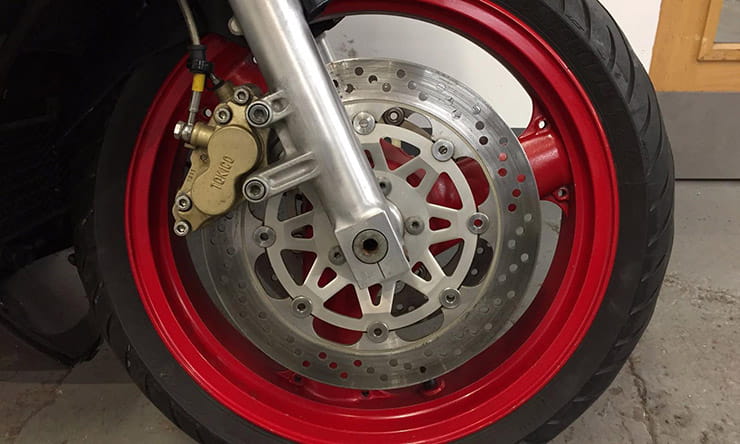 Bikes in the pics are on sale at: 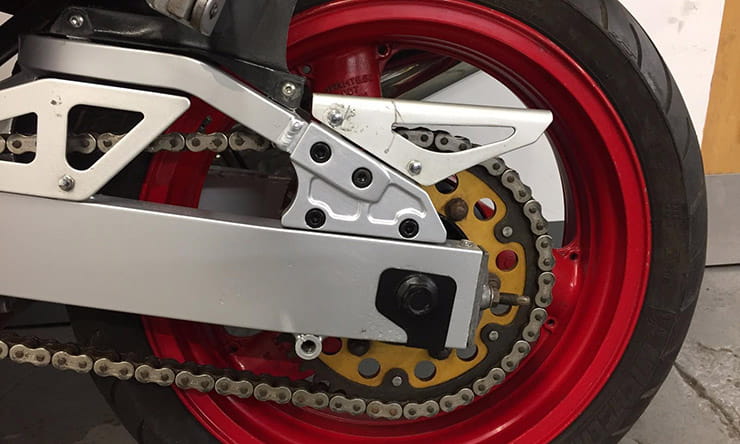