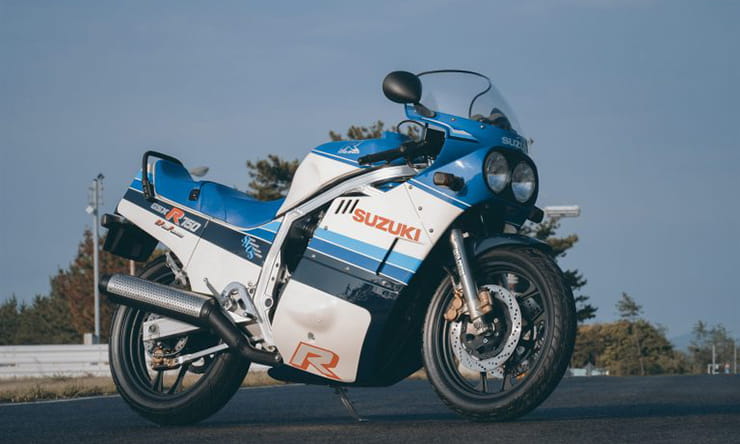 In 1984 Kawasaki turned motorcycling on its head with the GPz900R. It’s all-new, water-cooled, 16v motor made the same power as everyone else’s 1100cc mega bikes in a sharp handling package weighing 25kg less. Tom Cruise raced fighter planes on one, Geoff Johnson won the TT and it was the first production bike to top 150mph. Such was the GPz’s unstoppable ability that Yamaha’s long-awaited V4 RD500 grand prix replica became a side show.

Twelve months later Suzuki made the Kawasaki (and Yamaha) look daft, launching a pair of race-replicas for the road. The two-stroke square-four RG500 was much more of a true GP replica than Yamaha’s RD (which turned out to be essentially two RZ250 motors geared together), but it was the GSX-R that really sent jaws dropping.

This four-stroke motorcycle looked like it had rolled straight out of the Bol D’Or pit garages, claimed 30% more power than any previous 750 road bike and weighed a whopping 45kg less than Honda’s state-of-the-art VF750F. Those headline figures of 100bhp and 176kg were astonishing back then and would still be pretty impressive today. 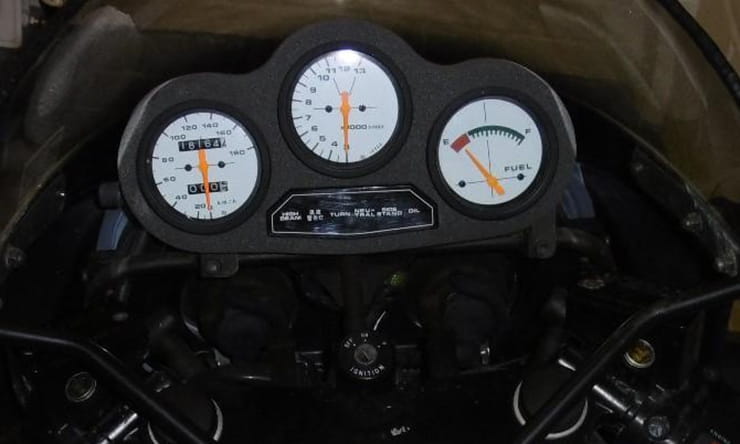 The GSX-R had an all-new short-stroke engine featuring 4v per cylinder, racing flat-slide carbs and something called SACS or Suzuki Advanced Cooling System. This was a clever system that used the circulating engine oil to remove heat meaning there was no need to have a separate and bulky water-based cooling system with all the attendant extra hosing, pumps and bulky radiators.

Instead, Suzuki fitted a high-flow pump, additional jetting to supply cool oil to engine internals and a huge oil cooler where the radiator would normally sit to transfer heat to the outside world. All this allowed the engine to be compact, light and powerful. Those compact dimensions in turn allowed the chassis to be smaller, shorter and lighter too. Suzuki, who had pioneered the use of alloy frames on the 1983 RG250 used an alloy cradle frame in the GSX-R750.

Everything was pared to the bone. The wheels looked flimsy because they were. Wheels spindles were tiny, bodywork minimal, and the sparse instrumentation was built into a foam binnacle. The riding position was exaggerated sportiness. Footpegs were high and rearset and the reach over the long tank to the low clip-on handlebars combined with the enormous screen to make riders feel like they were hunkered down for Paul Ricard’s Mistral straight as they trundled down the A27 to work. 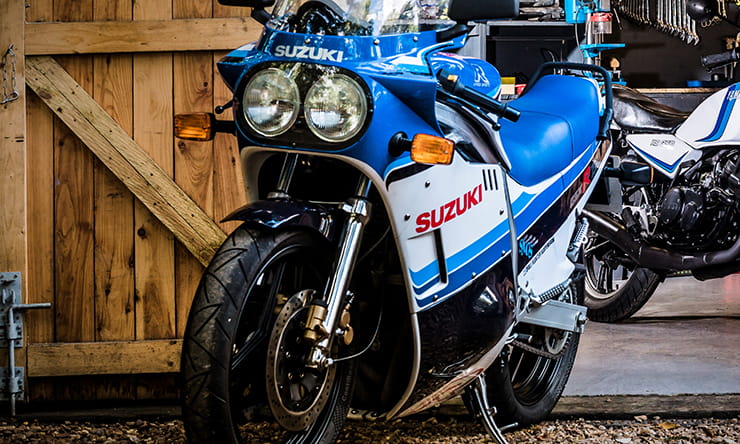 So much performance for a little over £3000 or £25 a week for three years on HP. If you were under 25, had a job and a motorcycle licence in 1985, chances are you had a GSX-R on the list. Yamaha also had a ground-breaking 750 on sale. The half-faired, not-quite-so-racey-looking FZ750 made even more horsepower from its liquid-cooled 20v motor, was much easier to ride than the all-or nothing  GSX-R (who’s huge peak power figure only came courtesy of the high-revving short-stroke design and those flat-slide carbs which rattled and spat at low revs and needed plenty of clutch slip to commute on). Both bikes made Kawasaki’s year-old GPz900R look old, heavy and slow, but the GSX-R was the one that’s become the classic.

The original design (now known as ‘slab-sided’) lasted three years. In that time Suzuki fixed the initial engine problems (con-rods letting go in the race bikes, turning Britain’s circuits into skid pans), sorted out the stability issues in the early models (high speed weaves and tankslappers) by fitting stronger wheels and bigger spindles in 1986 and launched the GSX-R1100 to which was disappointingly not as powerful as we’d hoped, but still light years faster over ground than its Honda, Yamaha or Kawasaki rivals, thanks to weighing a fraction of their enormous bulk.

The next 25 years were not kind to slab-sided GSX-Rs. Sports bike development moved so quickly that they quickly became slow, wobbly and very outdated. Build quality wasn’t great either and buying a cheap slabbie in the mid-90s was an opportunity to learn how hard brake bleeding could be, how complex anti-dive systems were to fix, how expensive an oil cooler could be and why high quality suspension in good order was so important on a motorcycle still capable of 140mph. 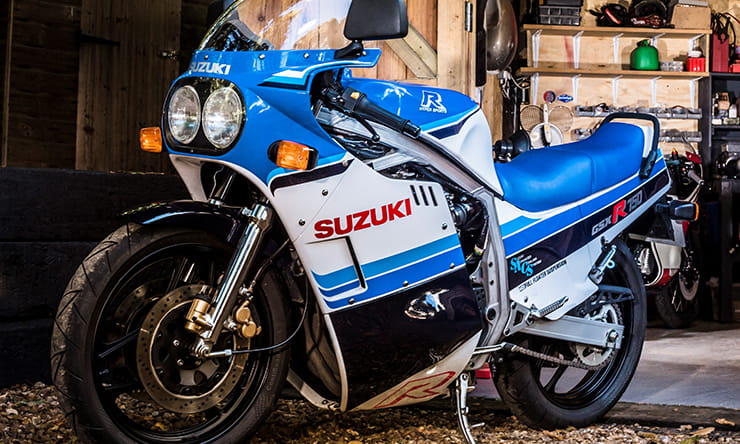 Many were thrashed and crashed into an early grave, even more were butchered into a nasty streetfighter, some brave lunatics even put engines from the 1100 into a 750 chassis (though these were mostly the later GSX-R750s). the grey import boom of the mid-1990s saw a lot of Japanese-spec GSX-Rs come into the country. Many were still restricted, but just as many weren’t. The easiest difference to spot is the fuel gauge fitted in the instrument binnacle. Even as recently as 2010 you could pick up a tidy GSX-R750F, G or H model for around £1500.

And then we started getting nostalgic and prices for a good GSX-R started rising. Except there weren’t really any good ones left – just some that were less bad than the rest. Thankfully, most parts are still available thanks to Suzuki’s Vintage Parts Programme, there are plenty of used spares around and all those grey imports were in much better nick in 1998 than the original UK bikes and so the used spares are still mostly serviceable.

As always with a classic, the secret is to buy the best, most complete bike you can. Preferably someone else’s almost finished project with all the hard-to-find parts in place. Haggle hard because you know they want a sale (whatever the advert says – it wouldn’t be advertised if they didn’t want rid of it) and don’t be afraid to walk away. You are buying a classic – a project – not your next commuter so you can afford to wait for the right bike. 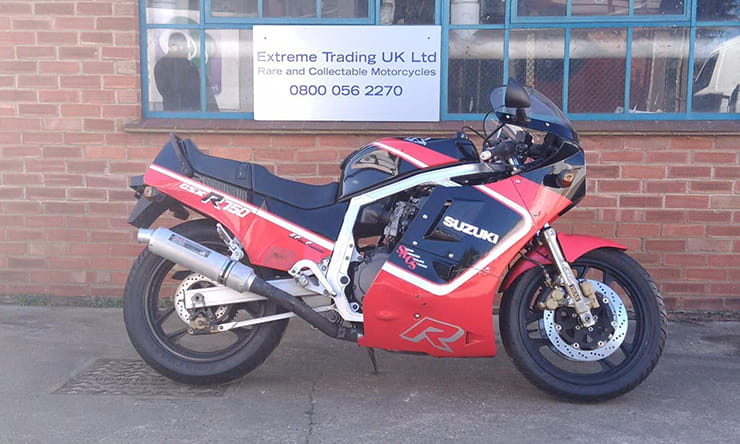 Expect to spend a long time finding the last few parts. Also expect to spend a lot of time at the end setting up the engine, the carbs and the chassis properly. GSX-Rs are fickle, temperamental and live on a knife-edge of being beautiful or horrible to ride.

Once finished, don’t expect it to be easy to ride like your modern bike, don’t expect it to be comfortable and don’t be surprised at how bad 1980s suspension and brakes turn out to be. Truth is the idea of a GSX-R750 is much more exciting than the actual experience of riding one, but you could say that about every British classic out there and that doesn’t stop people going ga-ga over them, so don’t let it put you off the Suzuki either.

Instead of comparing it to a modern bike, enjoy the differences instead. Pure and simple sports bike riding that stays challenging even at legal speeds. 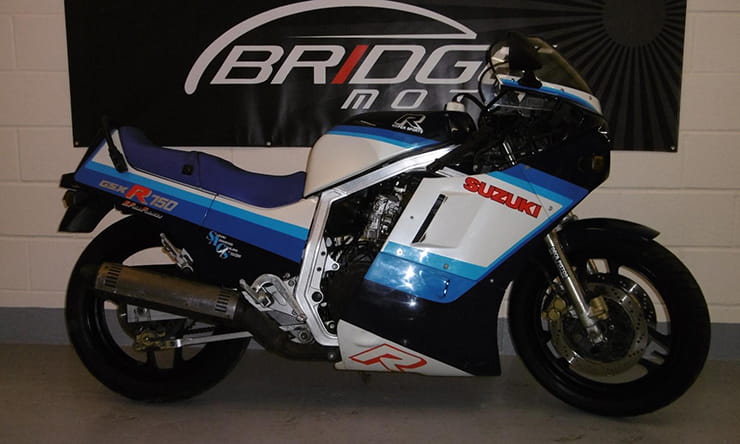