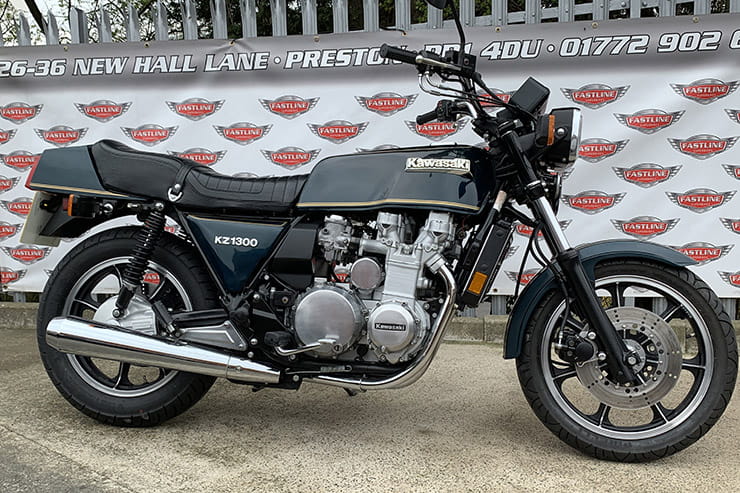 Back in the 1970s the formula was simple, if not especially subtle. Make it bigger, make it faster, no need to worry about going round corners for a few years yet, till the tyres catch-up with the power.

Oh, and make it for America, because that was the market that mattered. As the British manufacturers fell over themselves to put up the white flag, Honda and Kawasaki fought a tough battle for superbike supremacy.

Honda might have started it with their four-cylinder CB750, but Kawasaki became the kings of this joyful excess using a pincer movement of loopy two-stroke triples and macho, big-bore four-strokes. From 1972-75 Kawasaki’s superbikes were by far and away the most super, but Honda fought back hard, winning the race to 1000cc with the Gold Wing in 1975 and then dropping the twin depth charges of a six-cylinder megabike and genuinely sporty (for the time) 900cc version of their 750 superbike racer in 1978.

The CBX1000 was the first road bike to claim 100bhp, although some argued that the extra aerodynamic drag from it’s barn-door-wide motor wiped out any top speed advantage that the extra horsepower might bring.

When Kawasaki launched it’s even-more-metal-for-the-money Z1300 six months later, the more naïve motorcycling loudmouths just assumed it was playing copycat. The truth was though that the Z1300 had been in development for longer than Honda’s CBX and, if anything, it was Honda who upped the pace, because they saw the six-cylinder format as their hard-won trademark from GP racing 12 years earlier. 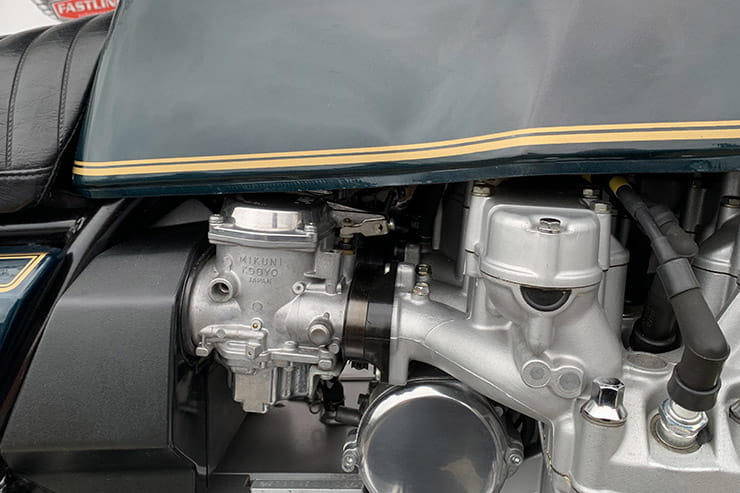 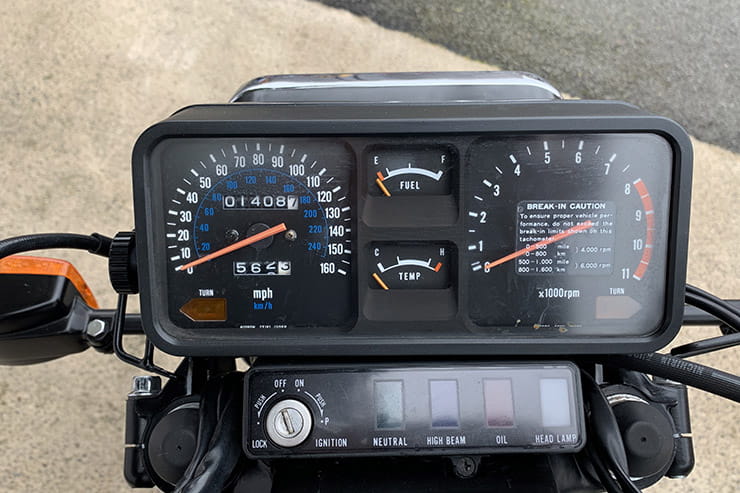 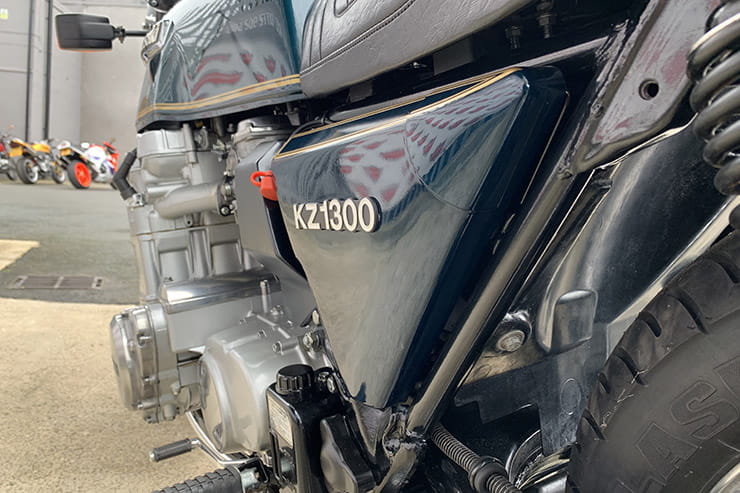 Kawasaki’s six-cylinder 1268cc motor was very different to Honda’s CBX and used much smarter solutions to the problems. The simplest was to use three twin-choke carburettors instead of six individual ones and the engine architecture used a small cylinder bore and long piston stroke, which along with a slim water jacket instead of cooling fins allowed a slimmer-looking (but actually the same width) motor than Honda with 26 per cent more capacity.

Kawasaki’s new powerhouse made a claimed 120bhp. Twenty per cent more than the Honda in a package that looked like the engine and frame had at least been designed by people in the same room. The Z1300 motor wasn’t pretty and, being so huge in a bike without a fairing it’s ugliness (you might say ‘functionality’) was hard to ignore. But it was fast, easy to use, had shaft final-drive and your mate’s brother claimed to have seen at least ‘a-ton-forty’ on his one down the local by-pass. 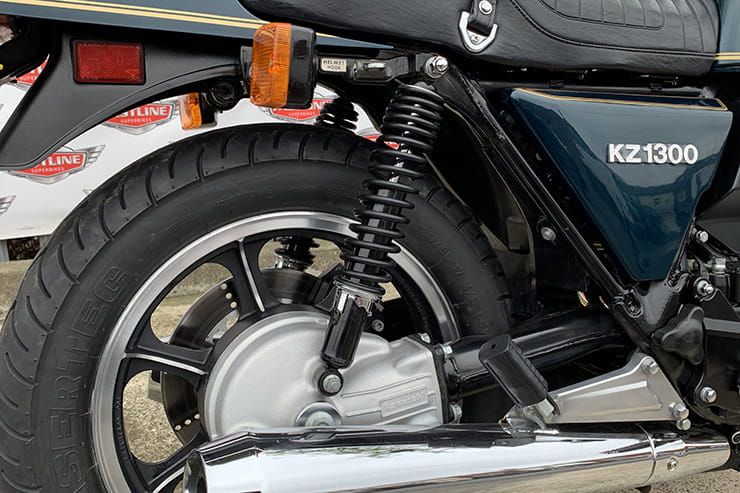 What your mate never told you was how long it took his brother to stop the thing for the imminent roundabout. At 297 kg, the Z1300 weighed almost 50kg more than the Honda. It also had a 50mm longer wheelbase, so you had to stop it sooner in order to have the extra time needed to steer it round a corner. Unfortunately, in 1978 motorcycle suspension was made from springs left over from biros and fork legs that wouldn’t be fat enough for a 125 commuter bike in 2019. You were better off bracing yourself and riding straight through the roundabout than attempting to go round it.

In the 1970s this didn’t matter because going round corners was for weird people who rode Italian motorcycles. But as the calendar ticked over to the 1980s, things like handling started to matter more. Like most big touring bikes the Z1300 stuck around for a long time. Many were produced at Kawasaki’s American production plant in Nebraska, which also built the touring version made even more cumbersome by the addition of an enormous fairing, panniers and (probably) an anchor to slow it down. 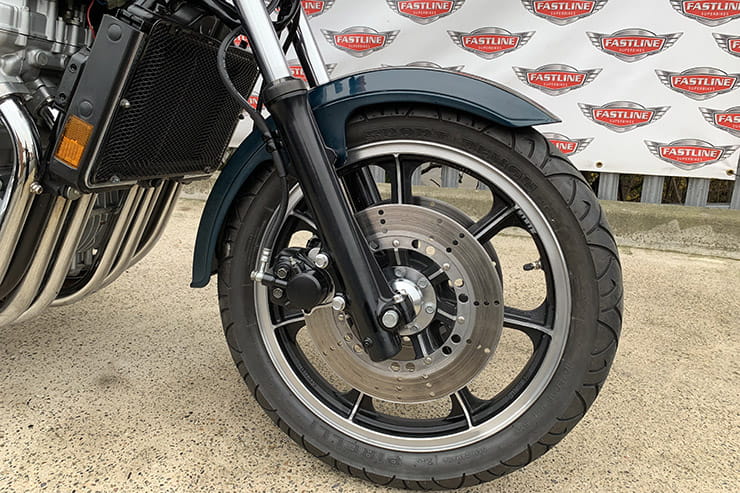 Not a lot of brakes to stop an awful lot of motorcycle.

By the time Kawasaki fitted fuel injection to the big Zed in 1984, they’d had a year of repairing the less-than-finished system on their GPz1100 sportster to draw on and the Z1300’s system was much more reliable. The fuel-injected bike made an extra 10bhp making it just about the most powerful bike you could buy in 1984. Build quality was excellent and sales trickled along before it was finally phased out in 1989, by which time Yamaha’s V-Max had rendered it obsolete as a toupe while Honda and BMW had touring all sewn up.

Honda’s CBX has always had the glamour, the collectability and the fanbase, but in the last few years interest in the Z1300 had pricked-up a little. There are still good, ready-to-restore examples available in the states and, as the supply of Z1s and H1/H2 triples dries up some of the bigger independent importers are starting to bring them in.

Before you buy one ask yourself if this is what you really want. Spares are still reasonably easy to get (from America if nowhere else), but there’s a lot to go wrong in a Z1300 and because everything is made out of materials slightly more dense than the centre of a black hole, the postage alone on a cylinder head could be more than you paid for the bike. 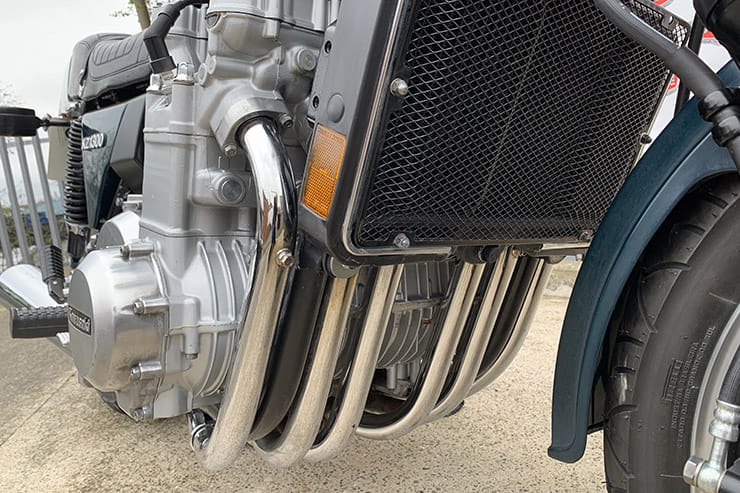 But if you really do want the biggest, mostest, headturning monster or have fantasies about being the next Gary Rothwell (legendary British stunt rider from the 90s who started his career doing the impossible on a Z1300), Arto Nyquist or Doug Domokos then only a Z1300 will do. Given that Honda’s original Gold Wing earned the undeserved title of a two-wheeled car, no one knows why the even bigger and heavier Z1300 became the stunt bike of choice for European crazies in the 1980s and early 90s.

This one is on sale (at time of writing) at Fastline Superbikes in Preston. It’s an earlier bike with carbs that’s done less than 2000 miles and is as immaculate as you’d expect it to be. We’d want to know if it’s had the bigger sump from the later model fitted (cranks running dry and seizing were a rare-but-important flaw with early Z1300s) and it might be worth taking an HGV test before you attempt to turn it round in the street. But apart from that, your only worry will be whether you are man enough to lift it off the sidestand. 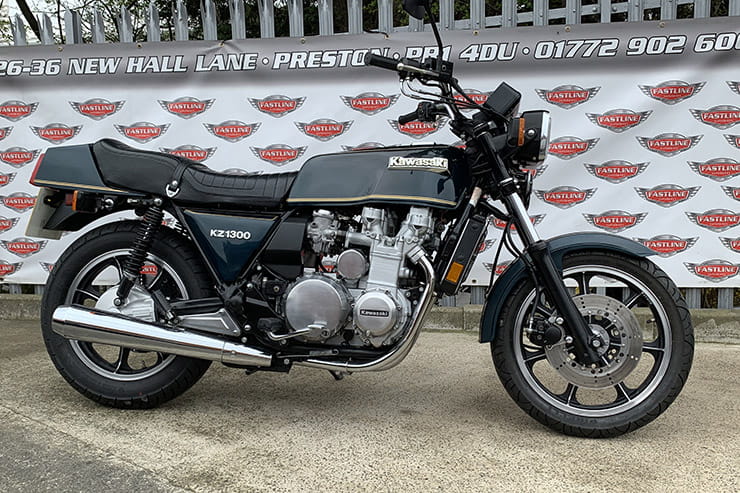