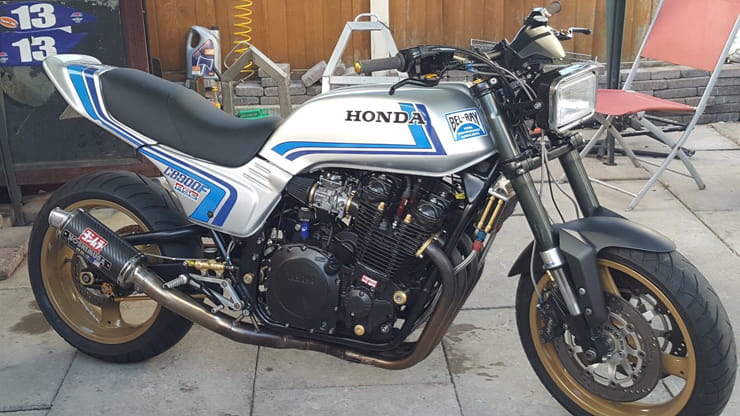 That looks interesting. Always liked the styling of those late-70s CB900s. The problem is that Honda were in their ‘weird-camshaft-development’ phase back then, where every model apparently had to have a different method of driving the cams. The CB900 solution (one chain from the crank to the rear cam and then another joining front and rear shafts) turned out to be even less reliable than all the other unreliable Honda cam disasters of the time.

Many owners had the pleasure of saying hello to the top chain as it popped out of the crankcases, and for most, that was the last time they bought a Honda till the mid-1990s. But some persevered, and recently, a few cunning special-builders have been fitting modern engines and running gear to old CB900s to build a bike that looks as great as a CB900F should, but with more speed, better fuelling and a whole lot more reliability. 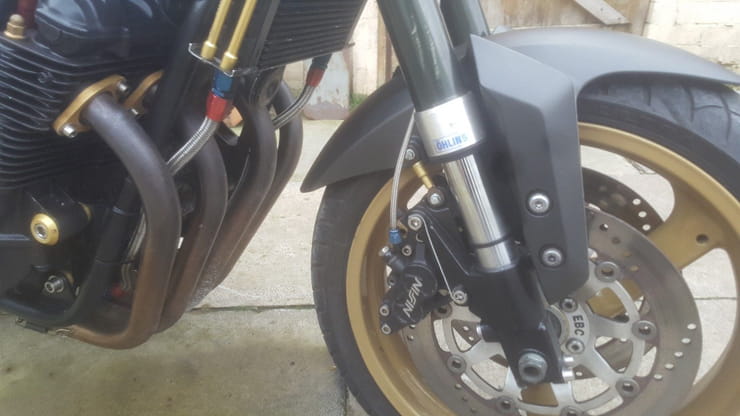 The most common swap is with a Suzuki Bandit 1200 motor, which has 50 per cent more power than the original Honda, is lighter, smaller and a lot more reliable too. It is also easy to adjust the fuelling when using a different exhaust – something the original CB900 motor was notoriously tricky to sort.

This one though has a Yamaha FJ1200 engine. It’s a generation older than a Bandit motor; physically bigger, heavier, but equally powerful and torquey, plus probably more authentic-looking in this frame.

This bike was built in 2004 and, back then, the Bandit (launched in 1996) was still a relatively new bike, so I’m guessing that used FJ engines (launched in 1986) were more common

The chassis has been modified to get the engine in and there’s a one-off stainless exhaust. If someone’s spent the dyno-time setting it up properly, this will be a smooth, torquey, kick-in-the-pants experience. If not, it’ll be one or more enormous flat spots followed by a frantic burst of sweet-spot acceleration. 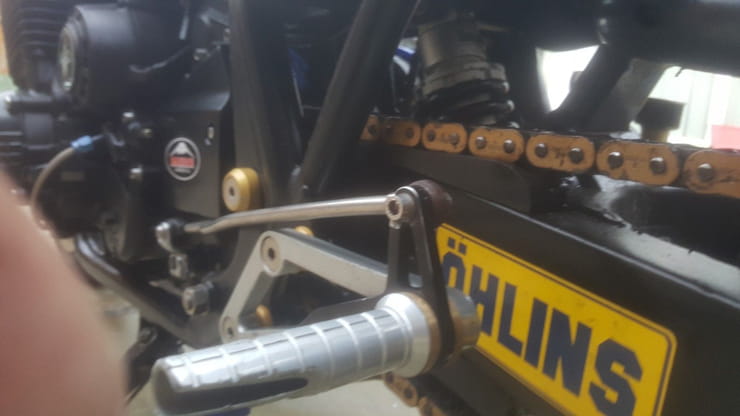 A closer look at the photos suggests that whoever built this bike spent a lot of time and effort getting it right. The chassis has been modified to fit the engine, the fuel tank has been lengthened to fit the new chassis and the subframe has been shortened to get the right look and lose the mounts for the old shock absorbers when the single shock swing-arm was fitted.

The front end is from a GSX-R750 and the back end is a Bandit swing arm with GSX-R shock absorber.

It’s got something. For an old, nostalgic duffer like me bikes like this get me excited. There’s a ‘rightness’ to the way a CB900 Freddie Spencer rep looks and, these days, you can pay close to the £3750 asking price for a restored, standard CB900, which will be slower, saggier and considerably more wobbly than this.

Going solely by the photos, this appears to be one of the better CB specials I’ve seen for sale. The golden rule of special buying though is to only spend half your budget on buying the bike because, however good it looks, there will be a mountain of hidden costs to either…

But someone has done a lot of the hard work here. Get lucky with your haggling and you might walk away with the basics of a really good special here for less than £3k. Take your time working out what you’ve got and what it needs to be ‘your’ perfect Spencer rep and this could be a bike worth having.

And, of course, if it isn’t, there are plenty more nostalgic old Spencer fans who’ll happily buy it off you.

Seriously, I was sorely tempted.

If you were braver or more tipsy than I was and bought this bike, please get in touch with BikeSocial, we’d love to know what it’s really like. 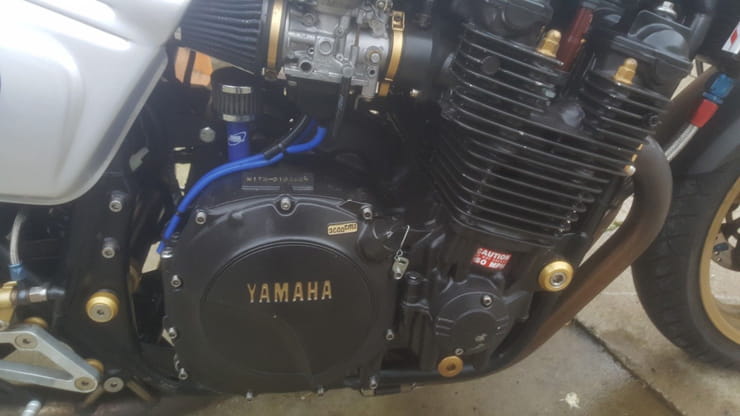