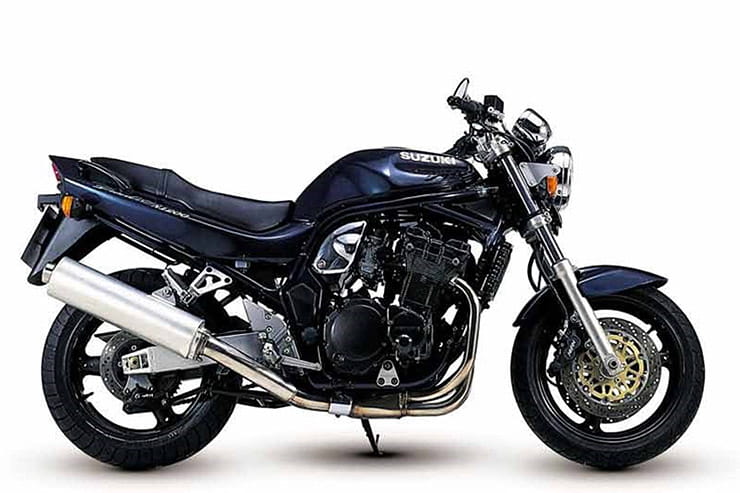 I want one, you want one, they’re cheap-as-chips, so what’s stopping us?

The first-generation Bandit 1200 is an obvious choice, but like all future classics we, the motorcycling public are steadfastly ignoring it. If you were one of the people that didn’t fill your shed with cheap Ducati 916s in 2009, then don’t blame me for not doing it again with Bandits now.

Bandits don’t fit the dream-bike category of classics like a 916 or Honda RC30. Instead they sit in the ‘we all had one, loved it and wished we never sold it’ sector.

Suzuki’s simple formula of putting a retuned GSX-R1100 motor into a strong, old-school chassis and making the suspension and brakes more-than good enough to cope was a winner. Selling it for less than the price of a sporty 600 allowed a whole generation of riders who would never have enjoyed a new or nearly new bike to experience the pleasure. Open throttle, go very fast, get around corners like you might even know what you’re doing, repeat. In a time before biking became a ‘lee-zure pursuit’ The Bandit 1200 was a simple good-time motorcycle for very appealing price.

Genuinely good, standard examples are getting harder to find, but that doesn’t matter because spares are plentiful and cheap and there’s no fun in buying a minter because you’ll be too afraid to scratch it. So buy the tidiest, most legitimate, cheap example you can find and enjoy the next few years watching prices rise as you slowly rebuild it. 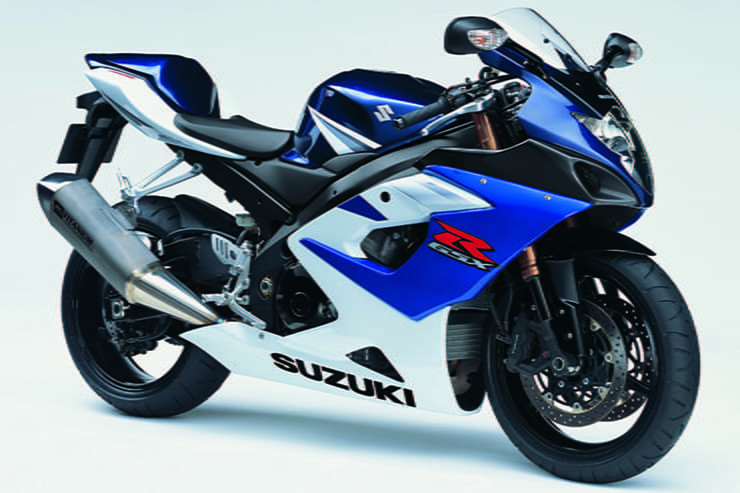 The most and best sports bike for the least money right now. Suzuki’s GSX-R1000K5 deserves to be a classic

The earlier GSX-R1000 (2001-2004) should be a classic because it was a new era of Suzuki speed and power. But it won’t be because everything was changing quickly back then and the early GSX-R1000s were neither game changers or universally loved. But the 2005 GSX-R1000K5 was different. Mostly because Suzuki built a road bike with an engine that delivered midrange, but also because they cleverly made it a race bike too by chucking all the clever, subtle technology they could at it, building a motor that was far in advance of anything else out there. The K5 engine had top-end power and midrange too. The best fuel-injection of the mid-noughties by some distance, a slick gearbox and reliability to kill for.

Having done that, they built a chassis that was comfortable for a sports bike, handled like a 600 and somehow, the whole thing weighed less than a Honda VFR400 NC30. Oh, and it was good looking and priced to sell too. Those who had one will soon be wanting another and many who didn’t are wondering if this is the classic GSX-R they should buy while prices are bumping along the bottom. You’ve already missed the boat on the first generation air-cooled GSX-Rs, whose prices are rising way above their actual values, but the GSX-R1000K5 will be the next (and possibly last) genuinely classic Suzuki. 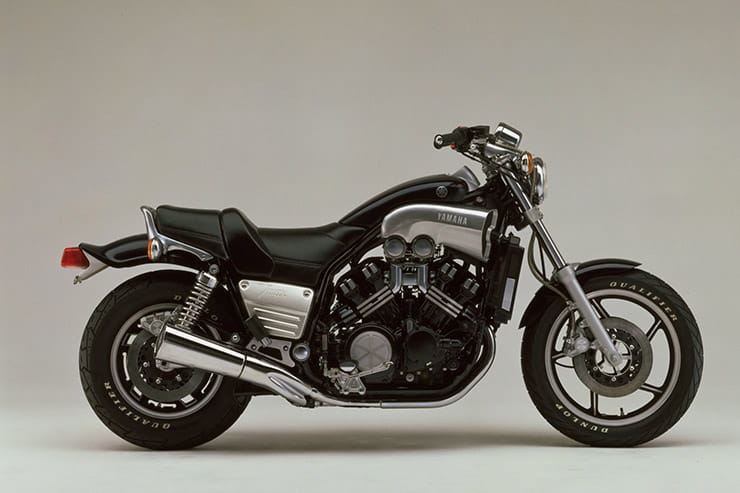 Everyone should own a V-Max at least once

You had to be there to understand why Yamaha’s V-Max matters so much. Back in 1985 a half decent superbike made 120bhp. Before Suzuki’s featherweight GSX-R750 arrived biggest was most definitely best. In fact, even after the GSX-R biggest was still mostly best because most of us twenty-something riders didn’t understand why less weight mattered. All we wanted was more power. Back then going round corners was necessary, but scary and not our anything like as important as going as fast as possible. When Yamaha took their American super-tourer, stripped off the fairing, gave it to Batman to do they styling and doubled the horsepower because they could, the V-Max was always going to cause a stir. Some bright spark then hired American drag racer Jay ‘Pee-Wee’ Gleason and a super-sticky drag strip at Baylands Raceway, where the V-Max posted a nine-second standing quarter mile, which was so much quicker than any other production bike had run that even we Brits knew this was special.

By the time the UK got the V-Max officially in 1990s sports bike Britain, no one really wanted it. But now we get it. Prices are on the rise and supply of really good ones is drying up. Many were customised beyond restoration, which is fine because… well, it is. Be careful that the bike you buy is full power – some (including official UK bikes registered before-1996) were restricted, which is why so many are American or Canadian imports. 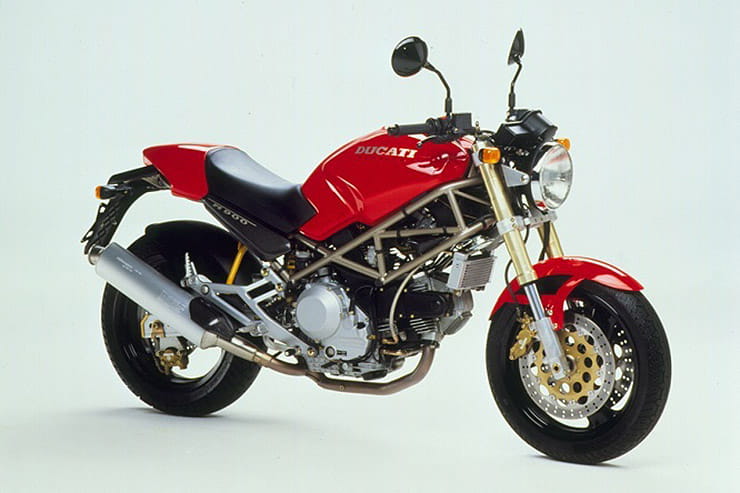 The first super-naked and still one of the best. We have no idea why prices remain so low

When Ducati first launched the Monster in 1993, pretty much everyone in biking slapped their forehead and said ‘why didn’t we think of that?’ Ducati pre-empted Suzuki’s Bandit by building a bitsa that was even more desirable than the donor bikes, selling it relatively cheaply and selling them as fast as they could make them.

Back then Ducati were in trouble. Lurching from one financial challenge to another while somehow winning WSB championships for fun. Putting the air-cooled, carb-fed motor from a 900SS into a modified frame from the 888 superbike with high bars, low exhausts and running gear fancy enough to justify a premium-ish price tag turned out to be a very good idea indeed. The M900 wasn’t a retro like Kawasaki’s Zephyr. Nor was it a sportsbike, even though it had sportier components than pretty much anything wearing that name. The Monster was the first of the super-nakeds; it had character and charm, but it also had the bite to go with the bark.

The original M900 should have already been a classic for at least ten years. It ticks every single box. Sadly, Ducati’s excitement to make the most of the Monster brand meant we have had so many different versions, with so many specs and engines that the world has developed Monster-fatigue and the USP of that lovely, funky characterful roadster has been buried by water-cooling, fuel injection, ever-more-sophisticated electronics and power figures more than double the original bike’s numbers.

Don’t blame Ducati – they are in the motorcycle business, not the classic market. Instead, be thankful you can still buy a decent M900 for sensible money and hide a couple away while you still can. 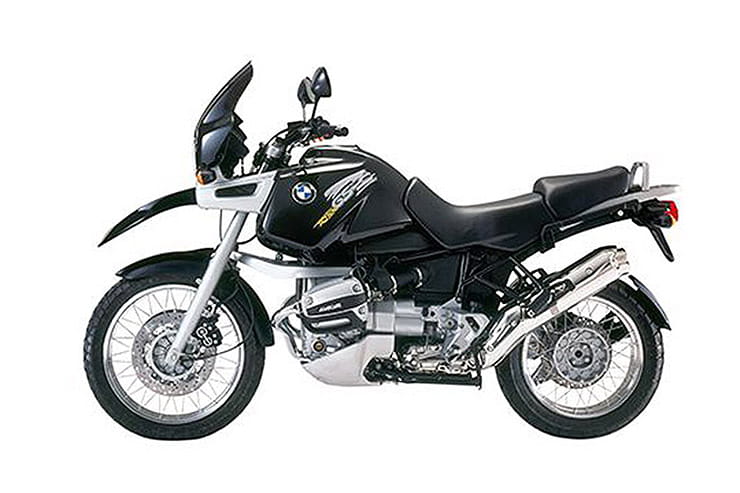 Finding a good one is tricky, but the R1100GS is a classic you can enjoy riding everyday

Before 1994 the only people who bought big trail bikes were a handful of eccentrics who simply wanted the physically biggest motorcycle they could buy. And the French, who all had at least three. In the UK we had mostly failed to buy Honda Africa Twins, Yamaha XTZ750s or any of the previous BMW R80/R100 GS variants. Back then we bought small trailies to either learn on or fall off in winter.

BMW’s 1994 R1100GS seemed destined for a similar fate. Expensive, bizarre-looking and lacking in both horsepower and knee-down credentials, it should have gone straight to the back of the showroom. And largely, it did, at first. And then a few broadminded bike journos started talking about it…excitedly. How the new eight-valve Boxer engine punched well above its weight and how well the unconventional front suspension worked. And how comfy it was and easy to ride surprisingly quickly, even with a pillion. And how far it leaned over and…and…and…

Our curiosity was pricked and when the even-more-brilliant R1150GS was launched in 1999 a few people actually started to buy them. When Ewan and Charley wowed our parents, wives and children, putting bikes on the telly and being very cool, more of us took the chance to jump ship from sports bike to adventure. Turning up at the pub on a mud-encrusted GS made you the man of mystery who might just have blown in from anywhere, where that day-glo Dainese and iridium visor had just made you look like a lollipop.

As the bike that started it all, the R1100GS deserves to be the classic it will surely become. Because not that many were sold and because those that were, became tourers and then cheap tourers and then dispatch bikes, tracking down a good one is hard in 2019. But because of the above they are still very good value. Spares and expertise are plentiful and, one day the R1100GS will be as legendary as Kawasaki’s Z1, a BSA Gold Star or Honda RC30 because it was the first of the best. And, if you ride a good one today, you’ll be surprised how good it still feels.