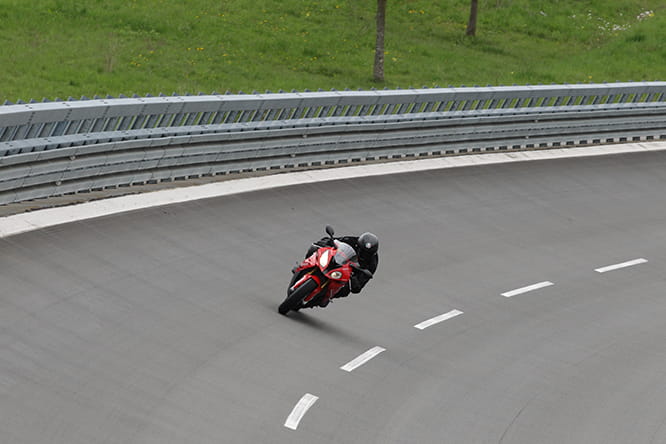 A 1.8-mile, three-lane, speed test circuit lies in wait. Two straights and two banked corners – one slightly tighter than the other. It’s empty. I’m sitting at its entrance on a 200bhp BMW S1000RR equipped with a scrubbed set of the all-new Metzeler ROADTEC 01 tyres.

A chap advises me to keep my speed below 106mph (170kph) around the tighter of the two corners, then 20 seconds later I’m tucked in, lying as flat as possible, holding my breath with the throttle pinned as I click the quickshifter from 5th into 6th. A quick glance at the dash and it reads 284kph (176mph) and as the banking whips you around I’m not sure how far ahead I’m supposed to look. Then I start thinking about how Guy Martin must have felt during his recent record breaking Wall of Death Talk ride…

There I was with an enormous amount of faith in the brand new rubber keeping me attached to the earth and my bones inside my body.

Here is the successor to Metzeler’s mighty Roadtec Z8 Interact sport touring tyre, launched back in 2010. The all-new ROADTEC 01 promises to raise the game in terms of performance, stability, wet grip and longevity, as you’d expect.

The headline figure here is a claimed increase in mileage of 10%; a strong claim from the company who began producing tyres 124 years ago and who now call Pirelli a stable mate. At the press launch in Germany this week the new rubber was put through its paces during a jam-packed day of appropriate testing through a series of riding activities at, and around, the Bosch testing facility at Boxberg.

Bike Social were among the publications from around the world also taking a look around the manufacturing plant in Breuberg near Frankfurt, one of Pirelli’s four motorcycle tyre factories around the world (Indonesia, Brazil and, most recently, China are the other).

Metzeler are quoting an RRP of between £240-250 for a pair and are lining them up in their range alongside its two previous generations; the mid-budget Z8 and the lower cost alternative, the sub-£100 Z6. 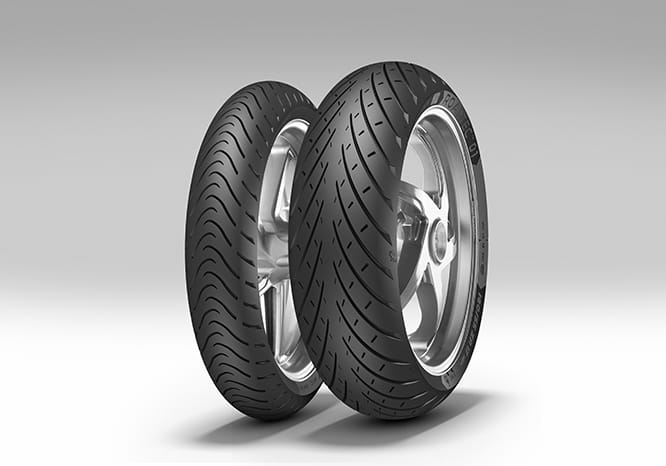 Throughout Europe the Sport Touring tyre segment has grown by 30% in the last 10 years and now occupies 38% of the total tyre market. But, rather than design and construct one specific tyre for bikes and riders who bang in the miles, Metzeler has created a tyre that will suit the commuters too.

Versatility is the key to the Roadtec 01 which, as we found out, is every bit as good at high speed as it is on low friction and even wet surfaces.

By the way, 90% of motorcycle product that comes to the UK is from this factory. 4 of Pirelli’s 21 factories around the globe make motorcycle tyres: Breuberg, Indonesia, Brazil and a new one in China.

Essentially this is a brand new tyre with brand new features and tread pattern to increase water drainage while improving precision, comfort and extended mileage.

The carcass is more elastic to provide a better contact feeling for the rider thus safer, while the compounds used for the front and rear differ because of their respective jobs. On the front, the gap between tyre pattern groves increases by double against the Z8s when leant over.

On the rear the grooves in the tread pattern are closer together at the centre of the tyre making the tyres response to the bike leaning nice and progressive with more rubber attaching you to the road.

The compound on the front tyre is made from full silica while on the rear is a dual compound – the centre stripe (around 20% of the tyre) is is made from only 80% silica while the remainder of the tyre across each shoulder and side wall is made of full silica. This, like the fact there’s no block pattern through the centre of the rear tyre, is because when on the brakes the weight of the bike pitches forwards and the less grip from that centre part of the tyre is required. 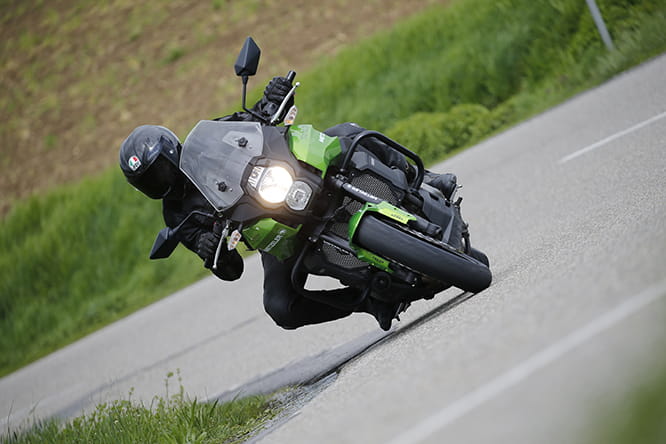 The advantage of a tyre launch is that you get to try several bikes using different styles of riding on the same tyre, back-to-back. So, as the ROADTEC 01 rubber is designed to be the tyre of choice for sports tourers, commuters and big mile travellers, I rode an appropriate collection of motorcycles: KTM 1290 Super Duke GT, BMW S1000R, MV Agusta Turismo Veloce, BMW R1200GS, Kawasaki Versys 1000.

The roads around the Boxberg test facility aren’t of the greatest quality which is a good thing. It meant the tyre could be thoroughly tested on real world surfaces rather than exclusively on a silky smooth circuit.

The German tarmac was rough in places with some unpredictable surfaces as well as plenty of number of man-hole covers to either deliberately steer around at the last minute thus simulating hazard avoidance, or to run over to see how the tyres reacted.

A mixture of slow and high speed corners with camber working with the bike or against it from the tightest, uphill, 1st gear hairpins to long, open and fast sweepers. The ride pace was ‘enthusiastic’ in places allowing for more deliberate pushing of the front end and opening the throttle hard coming out of a corner – all in the aid of a thorough test of course.

On each bike the tyres performed so, so well. Not once did I loose traction or grip, they were as comfortable in a straight line as they were in the turn and they seem adaptive to each type of bike when you consider the variation in style, weight and power difference between a Versys to an S1000R, for example. 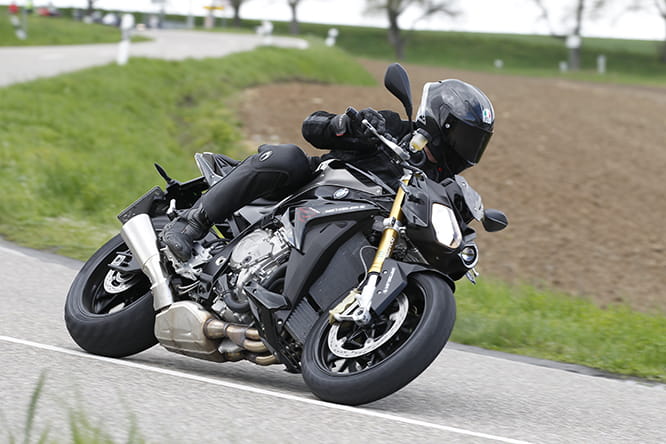 Flying around a high speed, banked test circuit was certainly an experience never to be forgotten and while the S1000RR BMW was more naturally suited to three fast laps, the two Kawasaki’s offered just as much in the way of tyre stability, comfort and predictability at 120mph+.

The runs around the 1.8 mile circuit didn’t offer much negative feedback but it would have been ideal to have tried the same models on rival tyres. 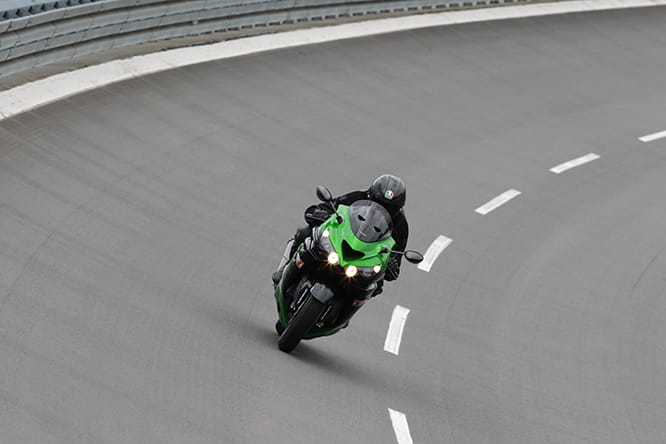 Metzeler’s newest tyres are said to offer an improvement in wet grip and on low-grip surfaces. That’s an improvement over the outgoing and already very competent Z8.

So when I presented with two Suzuki Bandit 1250S’s, one with the new ROADTEC 01 and one with the Z8 and told to head toward a soaked cobble-effect road at 60kph only to hold onto the front brake, rear brake and clutch all at the same time, I put my faith in the clever tyre engineers. 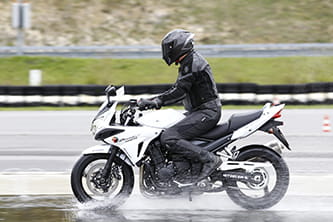 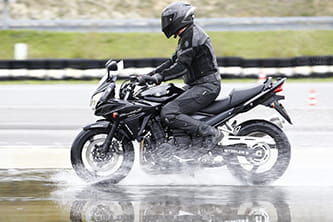 The test was to replicate an emergency stop situation on a wet surface with low grip. Having grabbed and stomped at the same time, the ABS shudders the bike to a halt where I sit for 7 seconds to allow the data recorder to capture everything it needs before being waved on. I decided to see how slippery the surface was and with minimal effort, the rear tyre spun as I moved away.

Back-to-back runs with the Z8 and 01 showed very little difference despite the data recording telling a different tale. Variables in the test include the accuracy of the speed of each run by the time you hit the brakes and how hard the brakes were applied. However, the group’s runs were averaged out and the Z8-equipped Suzuki took 1.6 metres further to come to a complete standstill.

Half of the super smooth track surface at Boxberg was covered in water from sprinklers on either side which poured water across the circuit while the undulations and camber added to its apparent treachery.

Never out of 2nd or 3rd gear on the variation of bikes, the tyres once again performed far above my expectations. Whether on a Honda CB1000R, Yamaha MT-09, BMW S1000XR, or BMW R1200R, the tyres warmed quickly on the dry section and coped beyond normal wet-weather riding through the soaking bits. 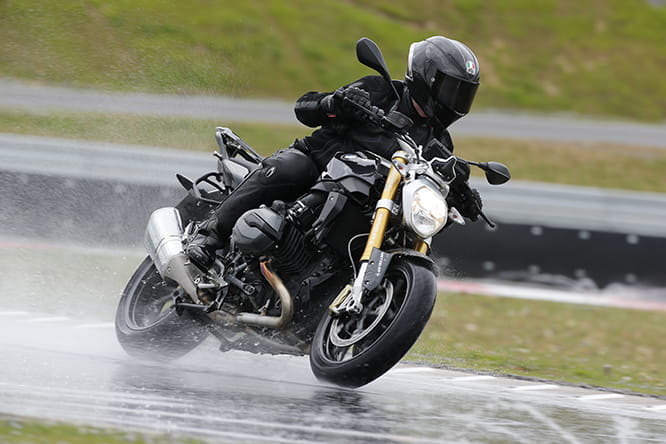 Overall, the ROADEC 01 tyres impressed. We’ll need to run them for several thousand miles in order to give you a longer term and more realistic review in terms of their durability and the claimed increase in mileage but following the array of surfaces and conditions on a range of bikes, the Metzeler’s are strong performers. Precise, stable and predictable with comfort too. While the £250 outlay may seem hefty, you’ll struggle to find another tyre that is as versatile. 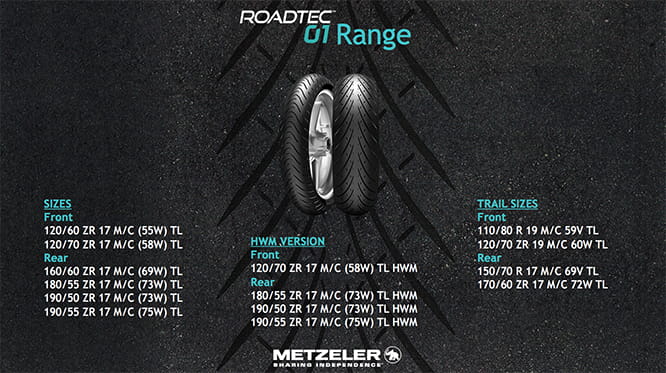 If you're running the ROADTEC 01 tyres then let us know how you're getting on?  or