Cruiser riders can be somewhat limited in their choice of tyres.

While modern sports bikes are uniformly adorned with 17” wheels, customs come fitted with a much wider range of rims, often chosen for aesthetic rather than performance reasons. 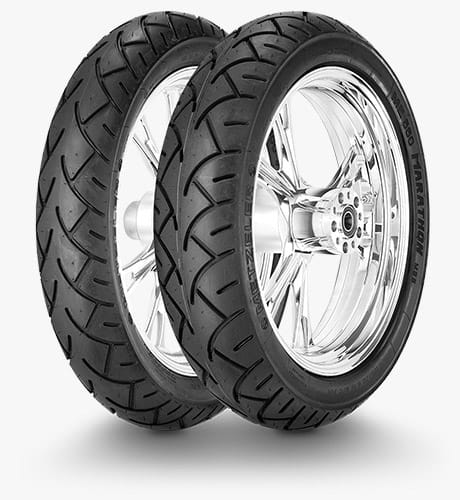 Those sizes alone make it unusual to find suitable matching rubber, with many owners making do mismatched rubber or dreadful cheap options from unknown Chinese brands.

Thankfully one manufacturer offering a premium choice is Metzeler, whose ME880 Marathons come in just the right sizes – albeit by fitting a narrower 140-section on the rear.

And that’s a good thing, because it’s a tyre I know well from many miles spent on a Triumph Thunderbird and would probably have been my first choice given a more open range of rubber. The Marathon is a modern crossply design that’s more like a touring tyre that comes in cruiser sizes than a cruiser tyre that looks the part but fails to deliver.

After all, tyres are one of the most critical components, whatever you ride and the Eliminator is pretty unusual in that it features a 600cc four-cylinder motor in a cruiser style chassis – a street ‘rod, if you like. The Metzelers come in an extensive range of sizes to fit most Harley-Davidsons , with rear wheel options starting at 15” and front wheel sizes up to 23”.

Look at the Metzelers off the rims and they look pretty similar to a modern day sports touring tyre in design, with a nice rounded profile and deep grooves for good wet weather performance. Where the Eliminator once danced a lethal dance on its tired old Taiwanese rubber, it now feels totally planted on the German rubber. The Eliminator may be my ‘project’ but the lesson is clear – cheap tyres are a false economy. Never mind the safety, it’s just more damn fun to go into corners with confidence that the tyre is not going to let you down.

Metzeler themselves describe the ME880 as a touring tyre and although they’ve only just been scrubbed in on the Kawasaki, I know from my Thunderbird days that they offer a really good blend of performance and longevity. Indeed the biggest complement I can give them is that you’d never, ever, describe them as ‘just’ a cruiser tyre and while I can’t vouch for ‘marathon’ mileage, my past experiences suggest that wear will be no issue on the occasionally used Eliminator.

The only downside that I can see is that they are maybe too modern for some tastes. For some cruiser riders, the look is just as (or maybe more) important than the performance and, on that count, the Metzelers lack that retro look that perhaps some of the Harley boys want as part of the package.

But for me, bikes are for riding and tyres are a fundamental part of the whole experience. With that in mind, you can’t go far wrong with some Marathons.