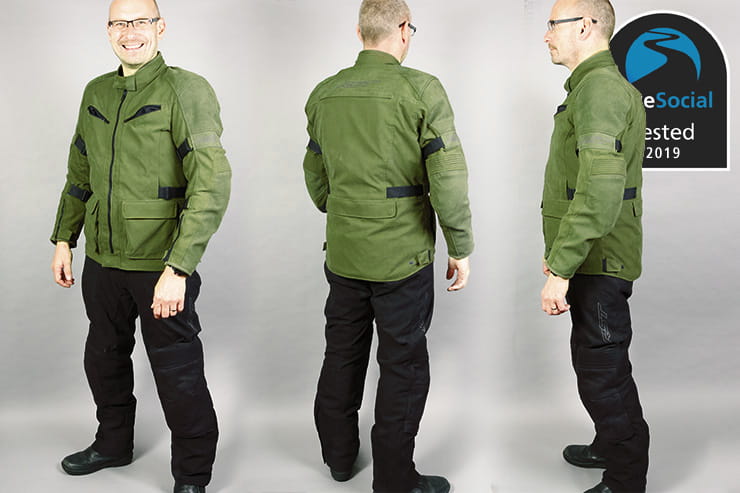 The RST Pro Series Raid textile jacket and jeans on review here are at the lower end of the price range. I’ve been wearing them in all weathers for around 2,000 miles on a Kawasaki Versys 1000, Yamaha MT-10 and Yamaha Niken… 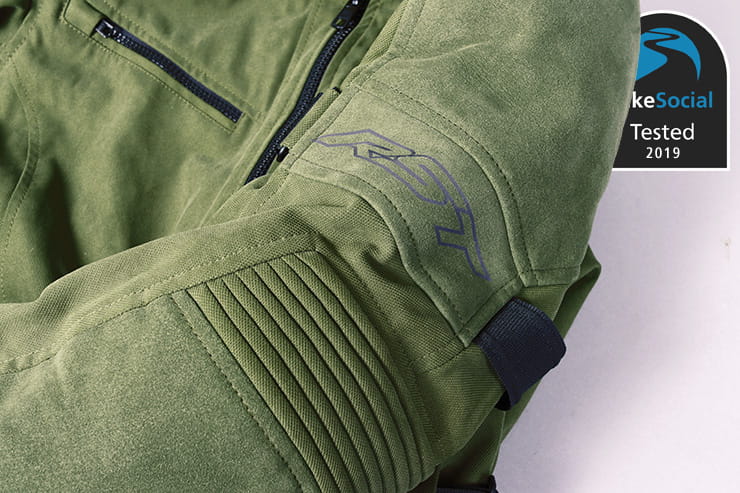 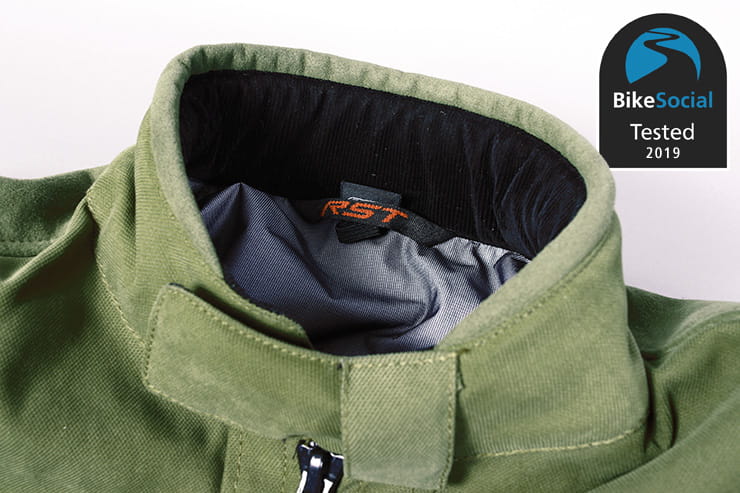 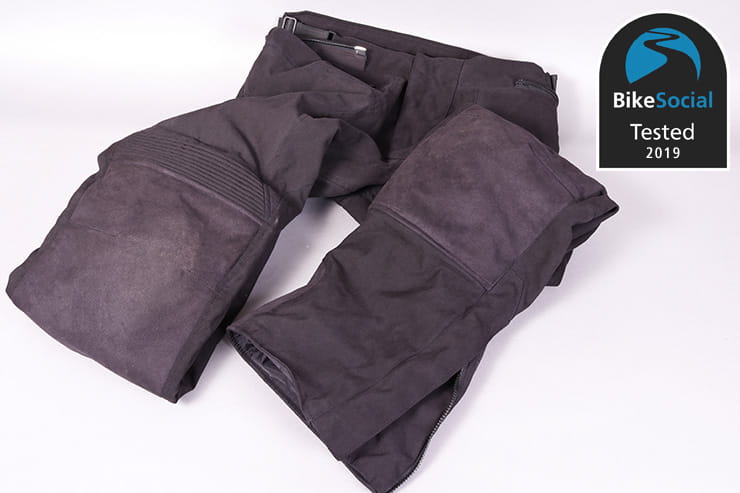 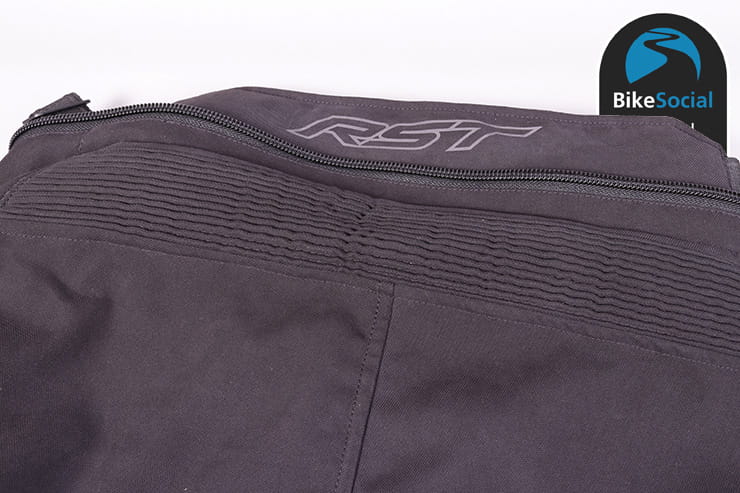 I take a UK 42 jacket and 34 trousers – the Raid kit is sized as I’d expect and feels well fitted. The arms are cut to a good length for general use, with stretch panels at the elbows, but they’re a little short for keeping tucked under your gloves in the rain. The trousers have stretch panels at the back and the knees.

Those cuffs are also a little bulky, so do check them with your gloves; I usually wear a pair of RST Tractech Evo Rs, which are roomy but still struggle to keep the Raid cuffs tucked inside.

This kit looks great on, though in the pictures – depending on your monitor – it might look rather bright green; it’s actually a very attractive shade described as ‘Military Green’ (it’s also available in black). For some reason, even after carefully setting the camera’s white balance, the jacket looked beige in photos – I had to tweak the colours in Photoshop to get it as close as possible. Even RST’s own site doesn’t show the true colour; when you see it in your dealer, you’ll understand how good it looks.

The trousers are only available in black, which work great with the green jacket, though I also often find myself wearing it with my Hood jeans. 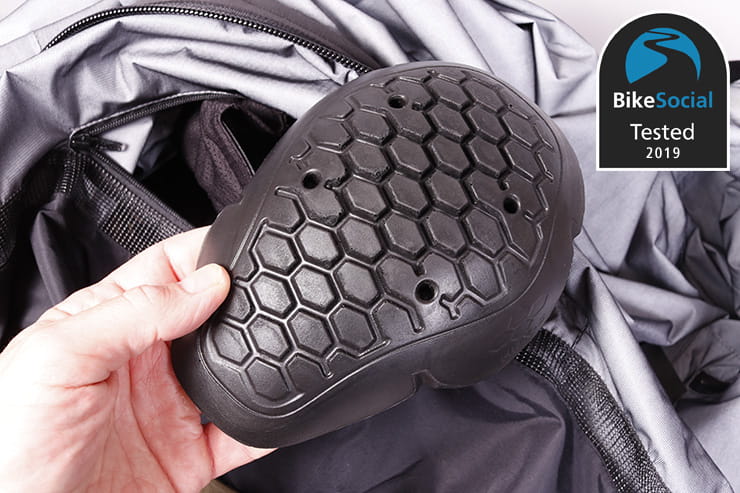 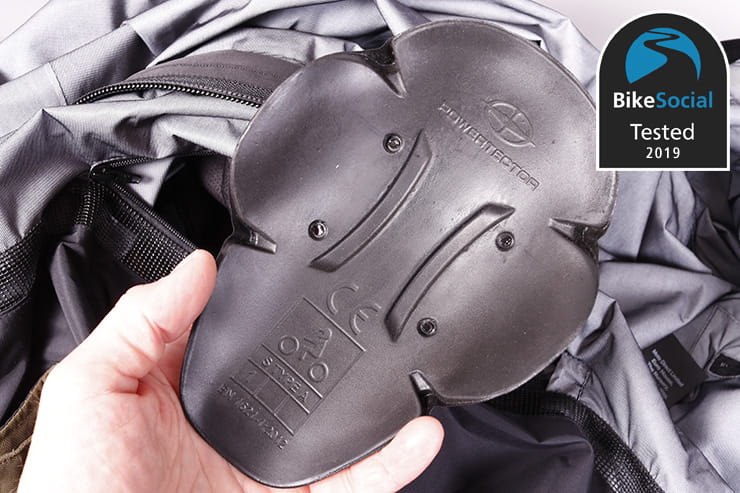 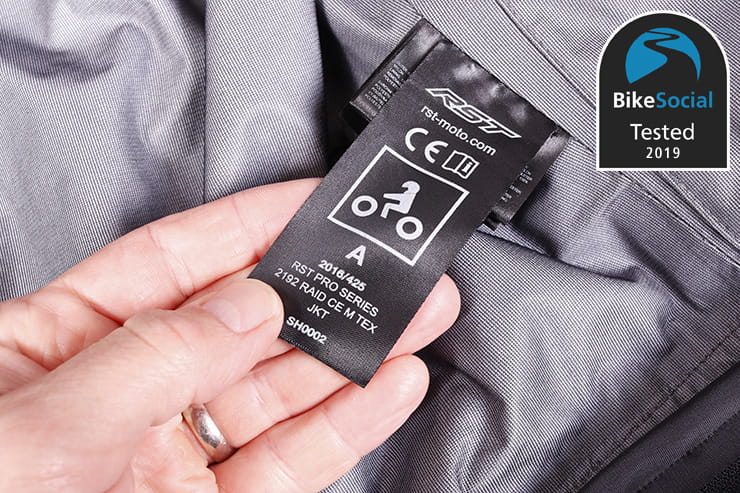 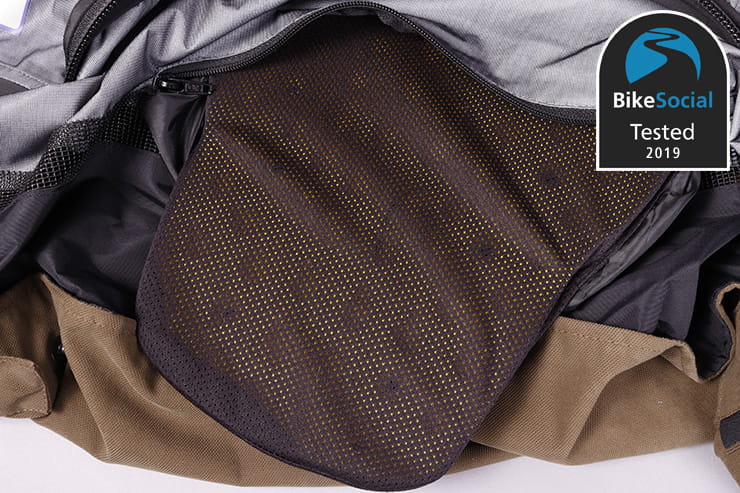 RST is to be applauded for ensuring its entire range is certified as Personal Protective Equipment under the requirements that are now fully in force (and it did it without increasing prices). The Raid jacket and trousers are both certified under prEN17092 to Level A. AA and AAA are the higher ratings, so while this won’t give anything like the protection of more heavy-duty reinforced or leather garments, at least you can compare it to other certified gear you might be considering.

The jacket comes with CE Level 1 elbow and shoulder armour, as well as a back protector. The trousers have Level 1 knee armour, with a pocket for hip protection if you want to buy it separately. This armour isn’t quite as slim as equivalent specification D3O for example, but it’s soft and feels comfortable to wear.

The elbow armour can move around a bit, but you can pull it tighter using the straps on the outsides of the arms.

The knee armour is adjustable for height, so can be set to sit well on your knees while riding. In the best position for me it’s a little low when I walk, but it’s so soft that it’s not uncomfortable. 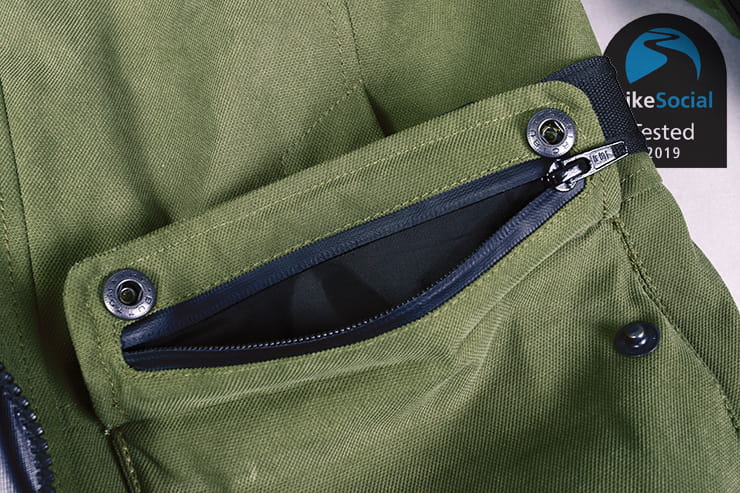 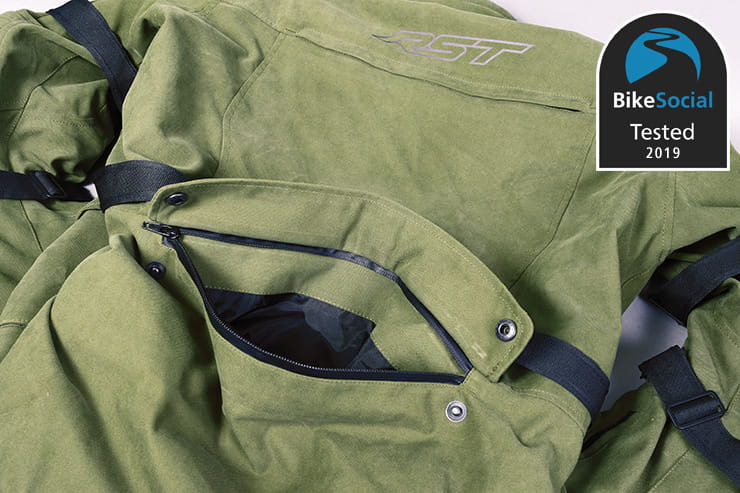 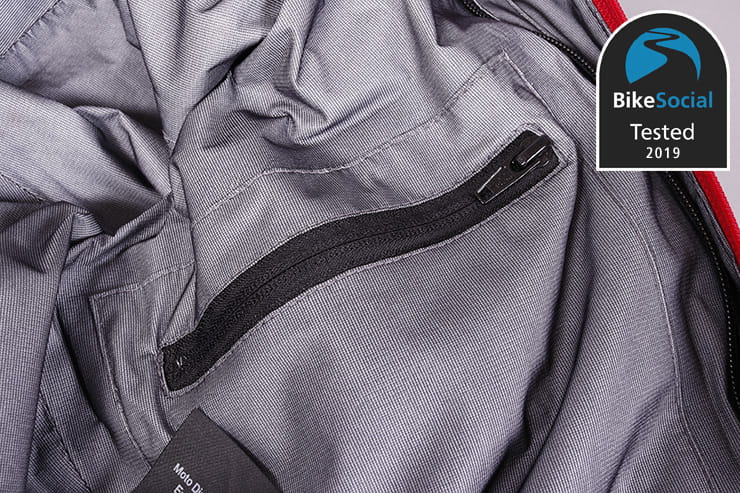 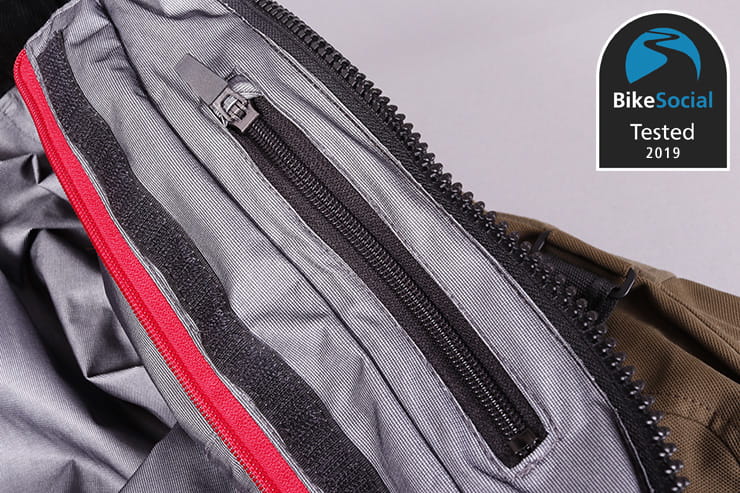 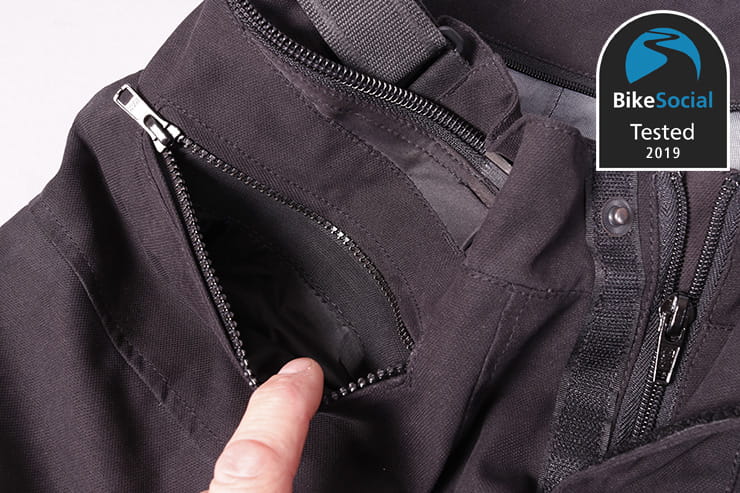 The jacket has two decent-sized waterproof pockets on the front (they fold over and zip shut with water-resistant zips) – they’ve got plenty of space in, though they’re not quite wide enough to fit a Samsung Galaxy S10 on its side; it’ll fit upright though.

Behind both of these pockets are another set, each with standard zips. Handy for extra bits and bobs that don’t have to stay dry in the rain, or you could slip your hands in them, though mine only just fit through the opening.

There’s a massive map pocket on the rear, closed with a water-resistant zip, and there’s also a useful lapel pocket just behind the main zip. Inside is another good-sized zipped pocket.

There’s only one pocket on the trousers and it’s not waterproof, but it is a reasonable size. 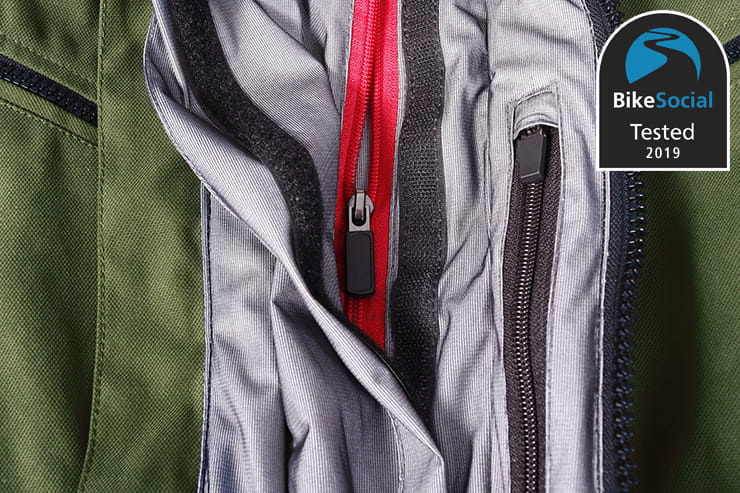 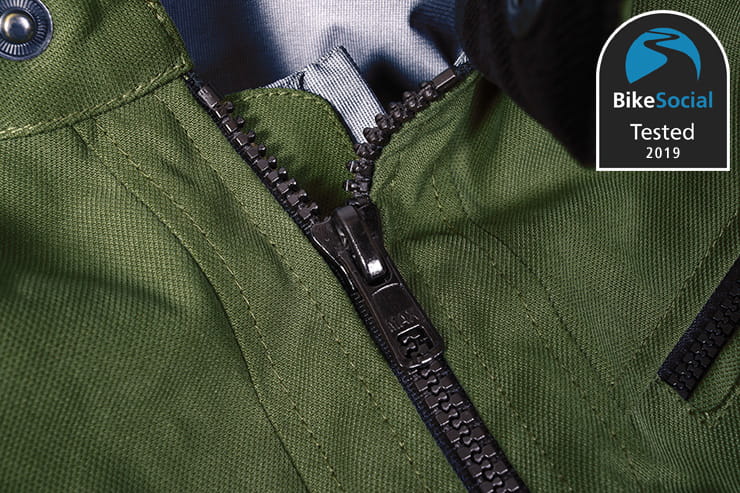 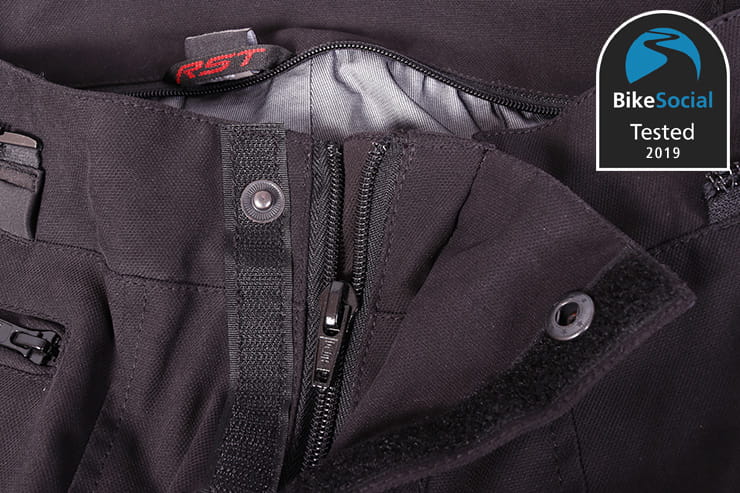 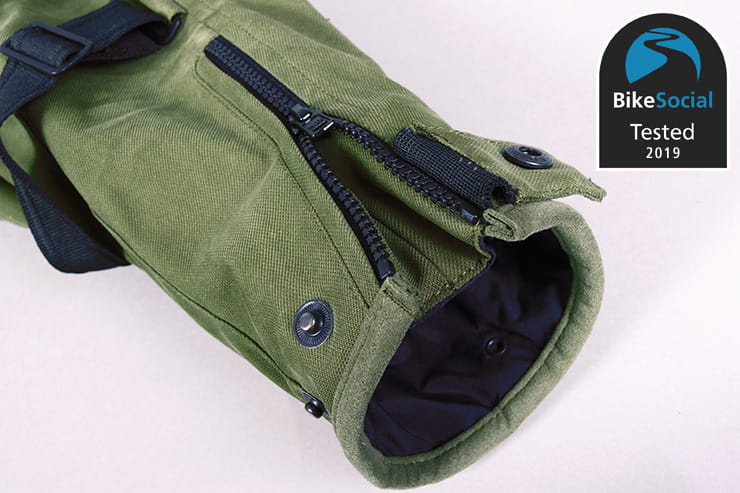 To fully fasten the Raid jacket, the waterproof liner needs to be zipped up first (it’s colour coded red), then the storm flap secured with its Velcro flap, before the chunky main zip is closed. It’s easy to use and doesn’t tend to snag. If it’s not raining, I usually don’t bother with the waterproof liner’s zip.

The trousers have a smooth fly zip with a length of Velcro running alongside it and a popper at the top. The trousers close easily and stay secure.

The jacket and trousers are joined all the way around with a chunky connecting zip that’s easy to find and operate.

My only criticism of the Raid kit is that the fabric in the cuff on the right arm sometimes snags in the zip when undoing it – I have to poke my finger in to get it clear. However, as my hands will pass through the sleeves with the zips closed, I tend to leave them shut now unless I’m fitting my gloves underneath. 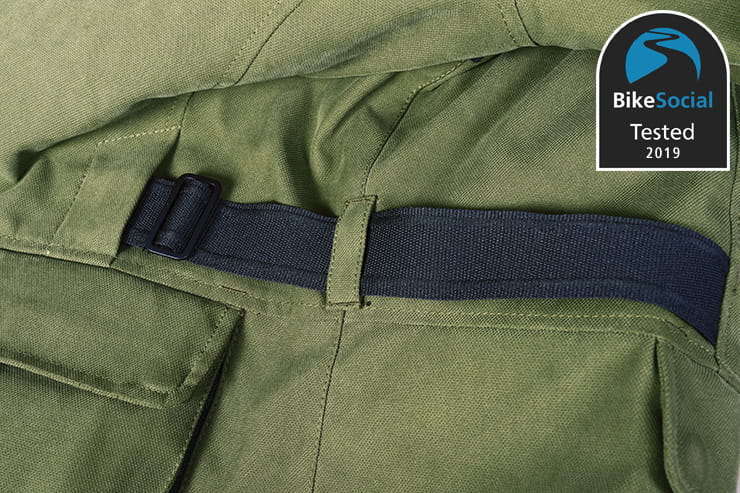 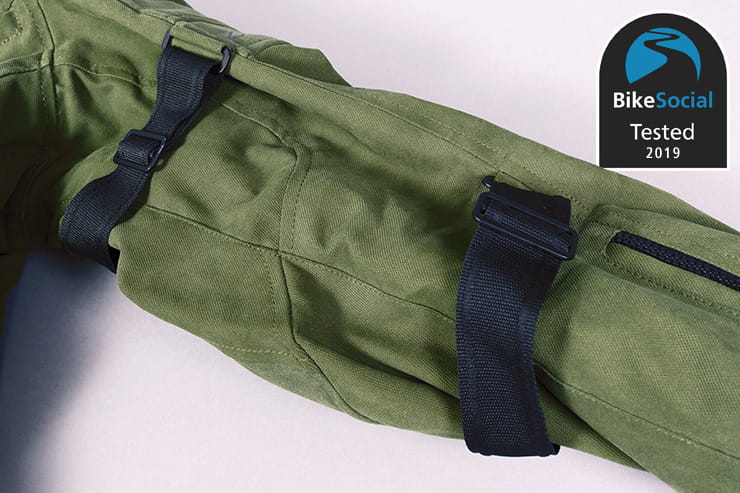 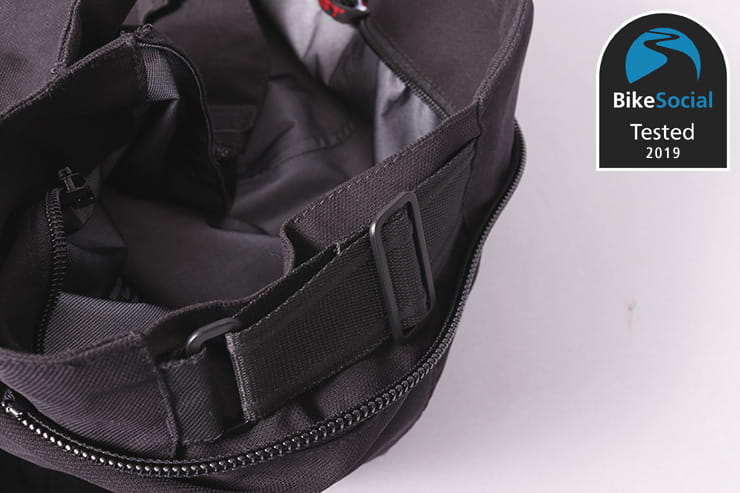 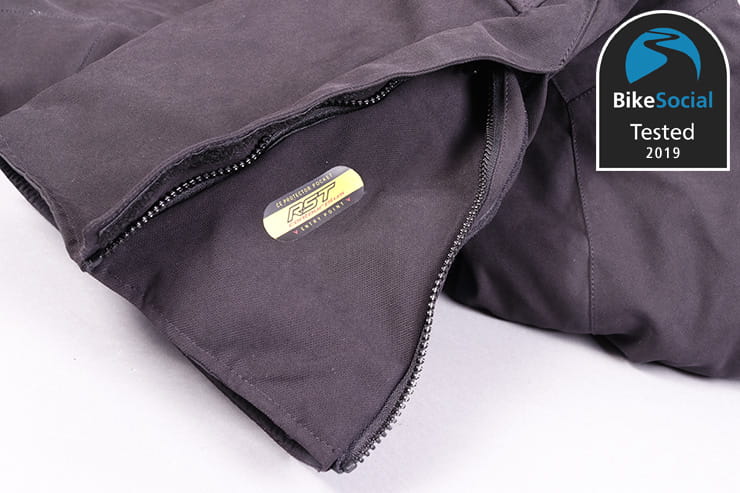 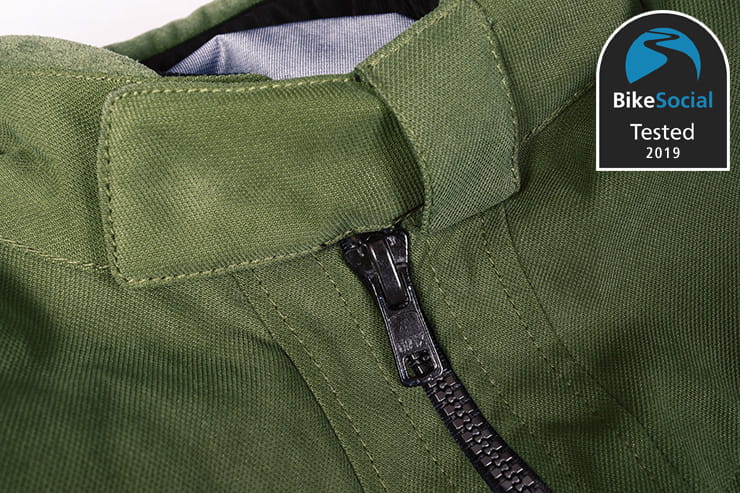 The jacket has a waist strap, one on each bicep and one on each forearm. They’re easy to use, though the waist one has a tendency to slacken itself off over a few days; it’s not bothered me though.

The trousers have a similar buckle strap adjuster on each side that ensures my trouser stay up without the need for a belt or braces.

There’s no adjustment in the bottoms of the trouser legs, so with some summer boots on they can let a bit of a draft up. They do fit over bulky enduro / adventure boots like my TCX Drifters though.

The collar has no adjustment, fastening with just one popper, but I find it fits my neck nicely.

The jacket sleeves have two poppers to allow for adjustment – this is my main disappointment with the jacket as I’d prefer to see Velcro here to allow me to set the cuffs with gloves as I want. I can get the Alpinestars Patron waterproof summer gloves under the cuffs, but nothing thicker as there’s very little extra room. Conversely, it’s really fiddly to use the second popper, and when you do, the end of the cuff rucks up, so as mentioned previously, they don’t tuck under gloves that well. Not a big problem in hot weather, but in the rain… 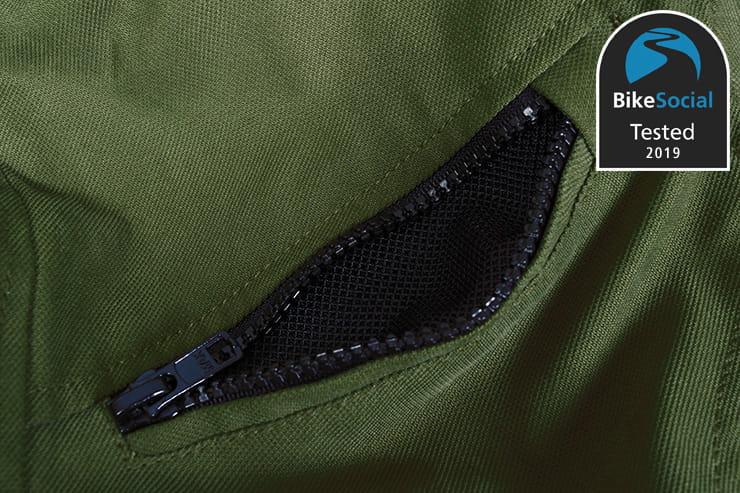 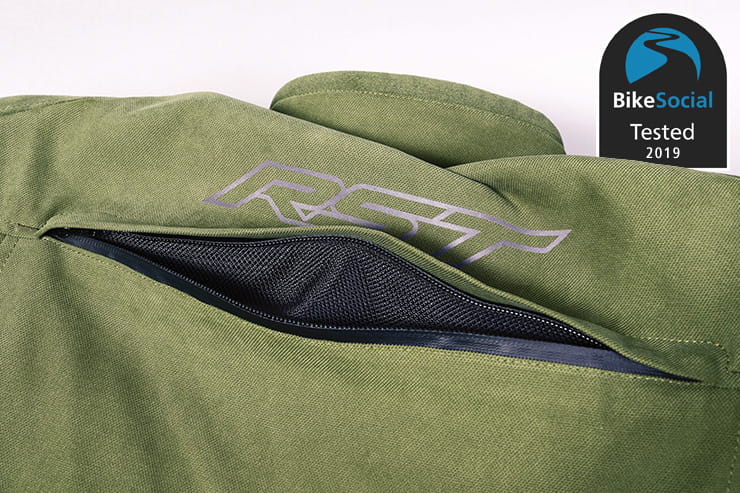 During a 20°C evening ride (with the thermal liner removed) the RST Raid jacket and trousers feel cool, comfortable and fairly breathable. As the temperature rises it can get a little more hot – at 24°C, even with both small front vents and the long rear exhaust vent open, I was starting to get a little sweaty so the jacket’s best worn with a technical top, rather than a cotton T-shirt; Mountain Warehouse always has cheap options available if you can’t stretch to one of the brilliant merino tops or one-piece base-layers from EDZ.

The thermal liners supplied with both the Raid jacket and trousers do a reasonable job of keeping you warm, but this isn’t going to be the ultimate winter kit, not least because of the drafts up the legs and cuffs.

The thermal liners are soft but get a bit clingy when you sweat in them.

With the thermals removed, the inside of the waterproof membrane is against your skin; while not uncomfortable, it’s not as pleasant as something with a mesh lining, though this would no doubt have put the cost up. When you start to sweat, the lining clings a little, but not as much as the thermal liner. Despite this, I choose to wear the Raid more than any other kit for commuting and blasts out in decent weather. 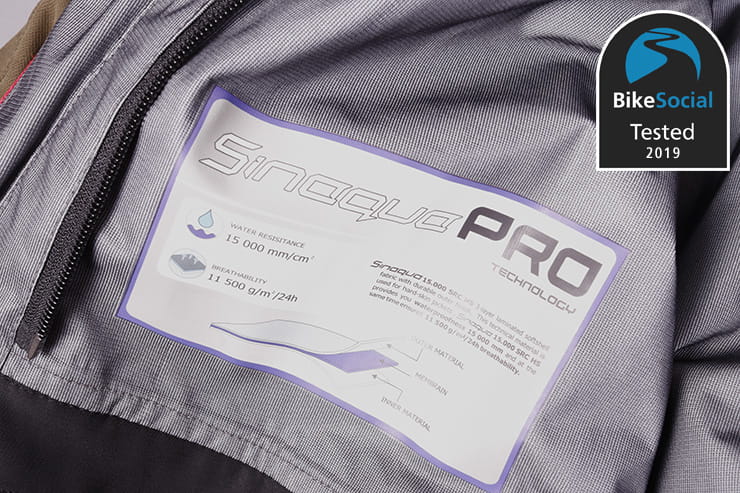 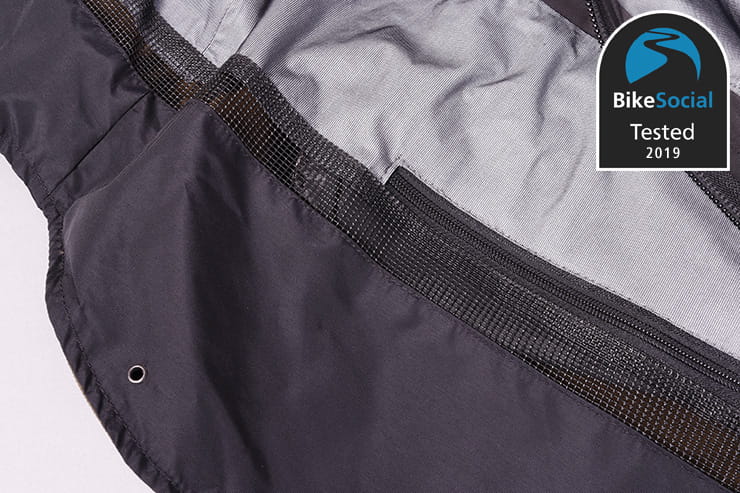 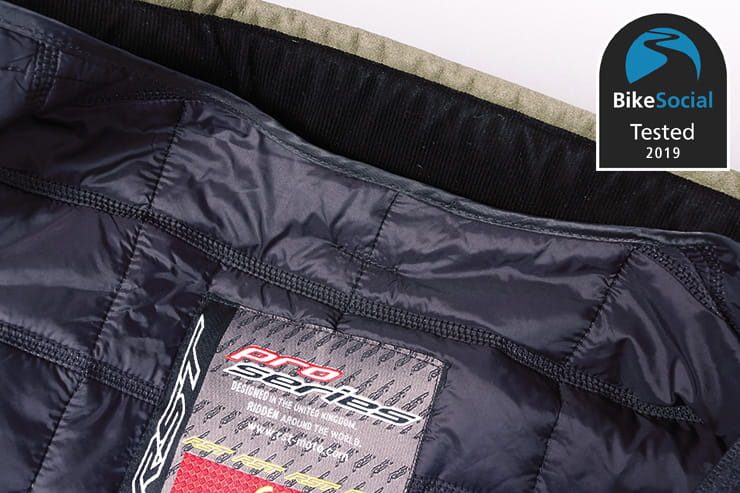 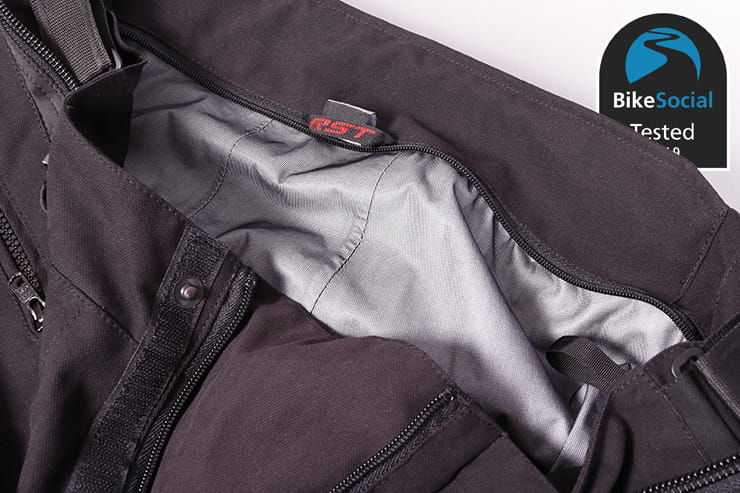 After over an hour in torrential rain on the motorway I had some water on my stomach that had pushed up between the top of the trousers and the bottom of the jacket. My shoulders were also a little damp, which could have been sweat, or moisture that had wicked from rain finding its way into the collar (though this does seal better on my neck than some much more expensive jackets).

The biggest issue in serious rain is the cuffs, which leave gaps when tucked under your gloves, yet can’t be secured well over the top either.

The trousers remained completely waterproof, as did the contents of the two main outer jacket pockets.

The Raid jacket and trousers have no Durable Water Repellent (DWR) coating, which means the material wets out (gets soaked) very quickly. Once wetted out, the inner waterproof membrane can’t breath as well, so you’ll get sweatier. It also means your kit stays wet for longer when you stop riding – eight hours after riding the outside was still wet at the shoulders, elbows, knees and calves (made of microfibre). The rest had dried. The insides of the forearms were also damp where I’d tried to seal my gloves underneath the cuffs but water had driven up.

There’s more waterproof, more ventilated and more protective kit out there, so RST’s Pro Series Raid jacket and jeans aren’t the perfect textile option. But if you’re not riding through all seasons and want a good-looking suit for a reasonable price, they’re well worth a look.

Besides a little fraying on the elastic of the cuff straps, this RST gear is wearing well, and I appreciate the look and feel, not to mention the little touches, like long hanging ribbons on the trousers to make it easier to store on a coat hanger (or dry out).

For a UK rider who wants to stay dry if they get caught out in the rain, or even a two to three season commuter, it’s well-priced with a great style. I’m lucky enough to have a large choice of kit to wear, but simply for the look and practicality during general use, I find myself wearing the Raid more often than not.