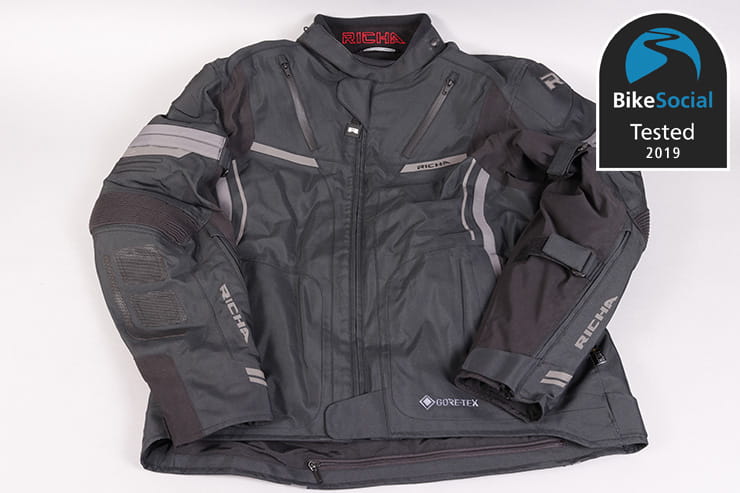 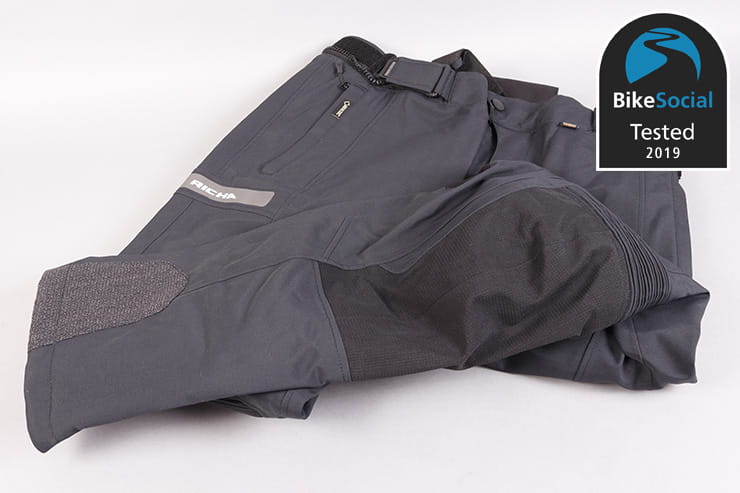 I’ve been wearing this Richa Arc laminated textile motorcycle jacket – along with the Richa Atlantic trousers – since early March for well over 2,000 miles, both on days out and commuting on my Honda Africa Twin and Royal Enfield Himalayan.

My commute is about 50 miles on a mixture of roads ranging from unclassified to motorways, and I’ve worn the gear on some light green lanes in the Lake District, as well as a 1,170 mile ride around Scotland over two days.

Both garments are made using a Gore-Tex laminate construction, meaning that the waterproof membrane is directly bonded to the outer fabric – the advantage of this over a typical drop-liner is that the outer material is far less prone to ‘wetting out’, or getting soaked. By not holding the water as much, it should dry more quickly after use, and retain breathability more effectively, while not letting you get as cold.

The jacket is styled more towards a sports cut – close fitting, it looks and feels very good. The front reaches my belt line and then gently curves around to drop a little lower at the rear. Stretch panels on the shoulder area mean it’s really easy to twist laterally, which enables really effective shoulder checks.

The pre-curved sleeves come to about an inch past my wrist when standing neutrally and then fit right onto my wrist when in a sitting position on the bike, hands on the handlebars, aided by the concertina panels just above the elbows.

Because it’s close fitting it doesn’t catch the wind on fast roads as much as a loose-fitting jacket, which made me feel more secure on the bike – a good fit is essential with any bike kit, so always try it on before you buy.

Richa doesn’t make an Arc trouser as yet, so I’ve paired the jacket with the Atlantic trousers. As with the jacket they fit me well, with the sizing as I’d expect. The straight-leg style doesn’t look baggy, with the fit being maintained by concertina panels just above the knees and with a slight stretch panel both behind the knees and underneath the groin.

The Atlantic trousers attach to the Arc jacket with a full-length zip and fit between the two is maintained by a large concertina panel on the back of the pants; once on the bike there’s an area of extra grip material on the backside to keep you in place.

After I’ve ridden into work, depending on what I’m doing I can wear them all day in the office as they look very smart. I even wore them to a conference (admittedly a motorcycle one), and I didn’t feel underdressed. If anything, I think it underlined my credentials by looking professional. 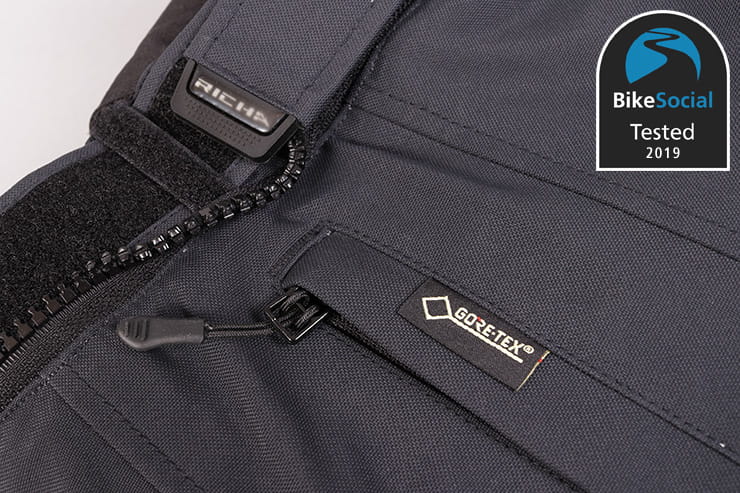 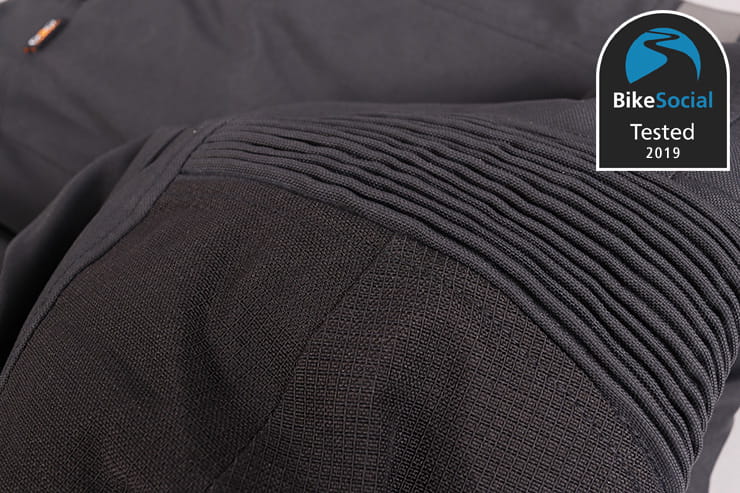 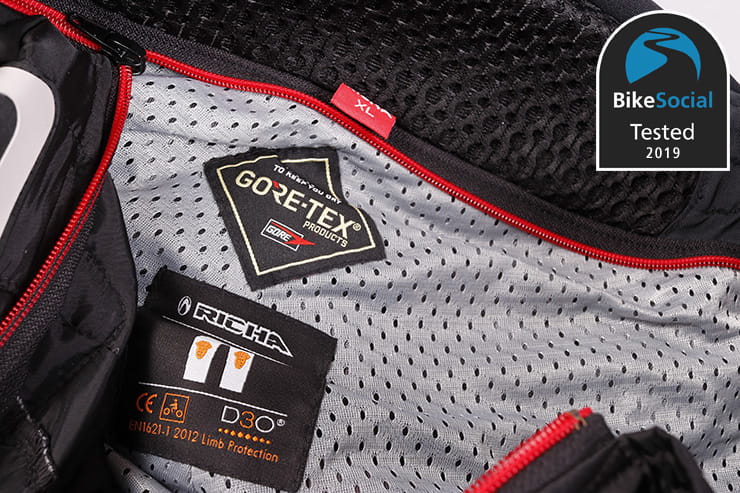 The Richa Arc jacket has a CE Level-2 D3O back protector, along with Level-1 armour in both the shoulders and elbows. The jacket itself also conforms to the new standard prEN17092-2-2017, classification A. This is the lowest of the three main classifications for motorcycle kit (AAA being the highest), but it’s good to see Richa certifying its kit – as every company should be now.

There are 3M reflectors at key points around the jacket including the back, front and sleeves.

The Richa Atlantic trousers aren’t yet CE approved as a garment (they’ve been on the market for a while), but they do have CE Level-1 D30 armour in the knees. There’s also a large area of GoreTex Armacore abrasion-resistant material covering the Armour and below the knees. 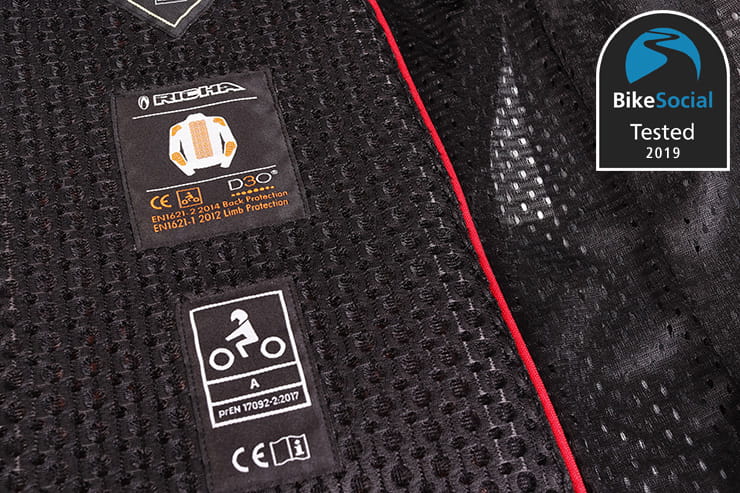 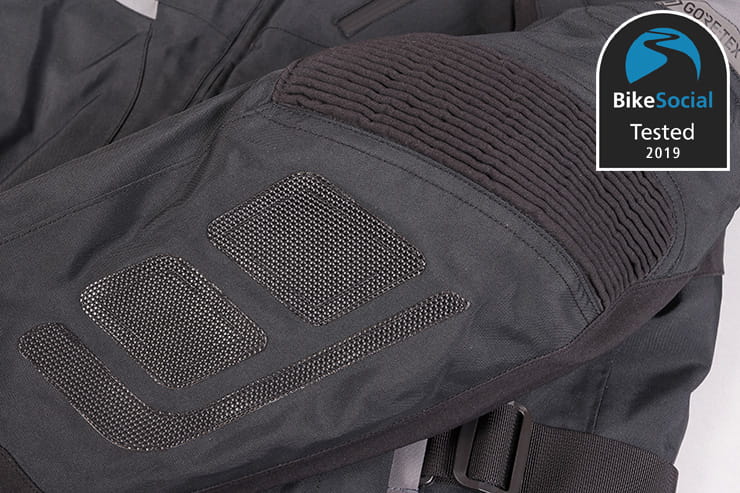 There are two pockets fastened by zips on the outside of the jacket around the mid-rift area, and pockets on the inside that are replicated on the removeable lining. The zips on the outer pockets water resistant to keep everything dry, and the inner pockets make do with Velcro tabs for closure.

There’s a rear pocket at the base of the jacket that I couldn’t get much in as the jacket fits closely although I don’t see that as a problem as I don’t really like having anything on my spine. As a map pocket it’s fine, and your pillion could make good use of it!

The Atlantic trousers have two zipped pockets in the traditional location and design. They’re comfortable to get a hand in and, as they’re waterproof, the insides kept dry, which is handy if you want to transfer small items in there when you’re off the bike. 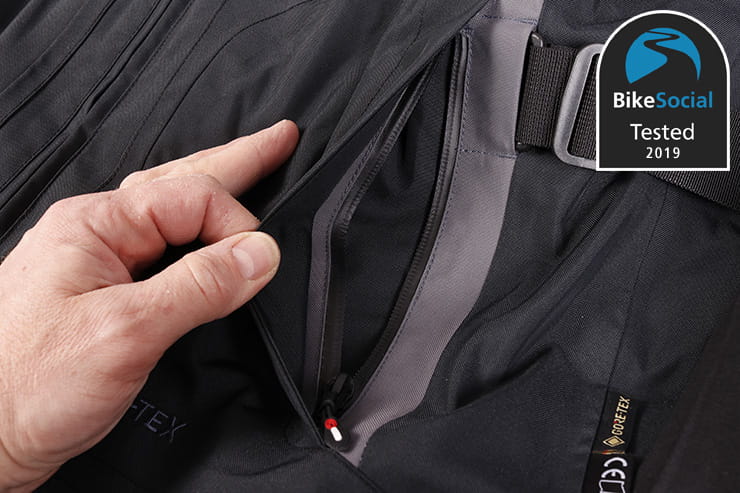 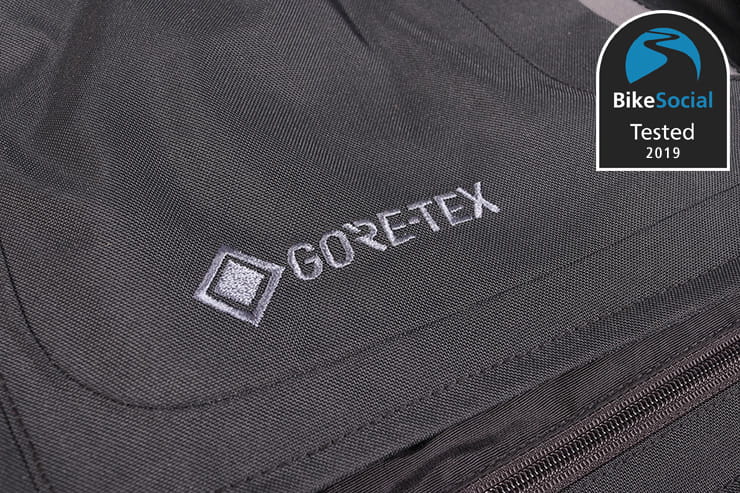 A quality YKK zip with an extended cloth toggle makes the jacket really easy to operate even with gloves on. There’s a hook and loop tab on the bottom of the jacket to keep everything neat, and at the top the zip is covered by a flap with a magnetic catch, which hasn’t come undone during riding. The collar is held in place by an extended flap and a large piece of hook and loop for adjustment. Once adjusted for width, the sleeves are held closed by hook and loop tabs.

The trousers use a YKK zip to fasten the front, and the waist is held together with both a press-stud and a metal hook; despite being worn every day, these haven’t loosened and maintain their effectiveness. There are two zips fitted to the top of the trousers – one full circumference and one short on the rear to enable attachment to different jackets. There are long zips at the bottom of the legs to let you get your boots on; I’ve been wearing a pair of TCX Explorer EVOs, and the very differently-styled TCX Baja GTX with no problems. Once you have your boots on there is a Velcro tab keep it all secure. 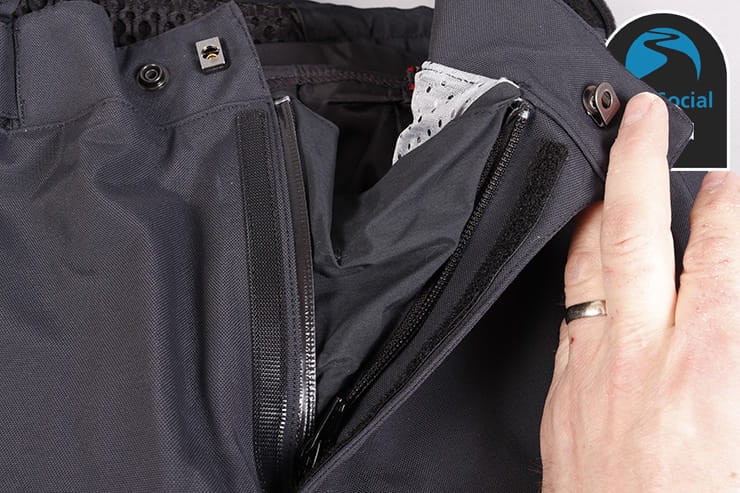 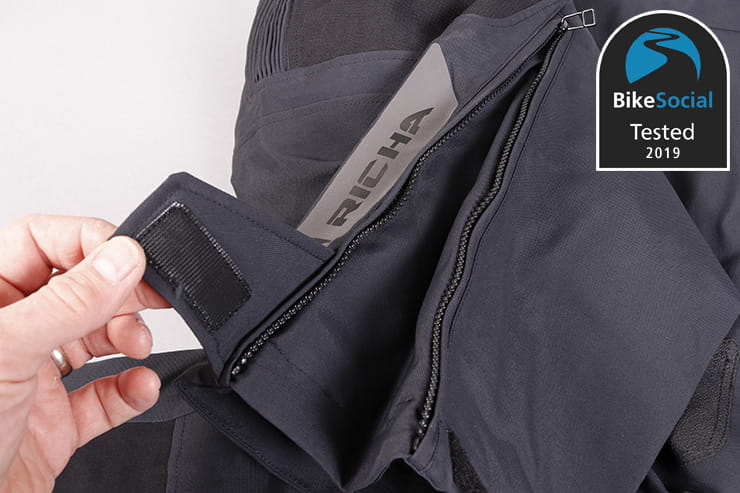 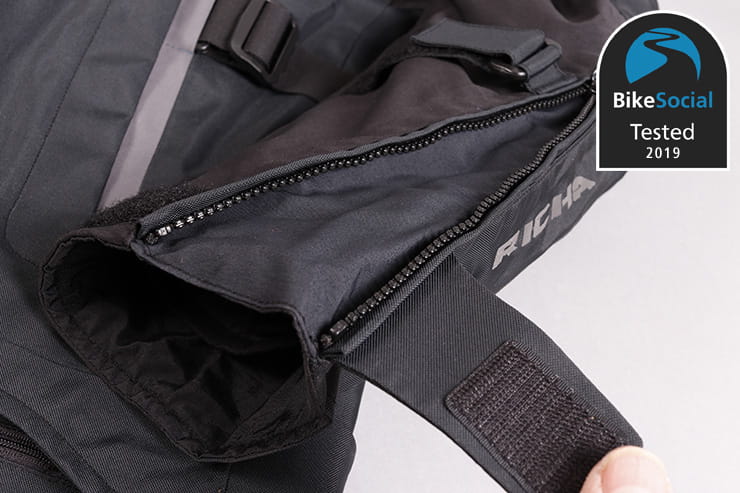 Getting a jacket to fit correctly is pretty much half the battle; having something that fits properly inspires confidence as clothing isn’t any use if it’s going to flap about when you’re riding.

Adjustment on the jacket comes via central external straps which can be tightened to suit, the benefits being that when the inner lining is removed they can be nipped up a little. The sleeves have a strap and hook and loop system on both the upper arms and the forearms for maximum adjustability. There’s a zip on the bottom of the sleeve that allows for different gloves either under or over, depending on the weather. I wore thick winter gloves and despite thinking the sleeves would struggle to accommodate them underneath, it wasn’t the case and I remained dry throughout.

The trousers have adjustability via a waist belt lined with hook and loop for correct positioning, along with braces that have a dedicated zipped-on panel. I’ve never worn braces before, but they’ve helped maintain the good fit that’s essential for waterproofing. 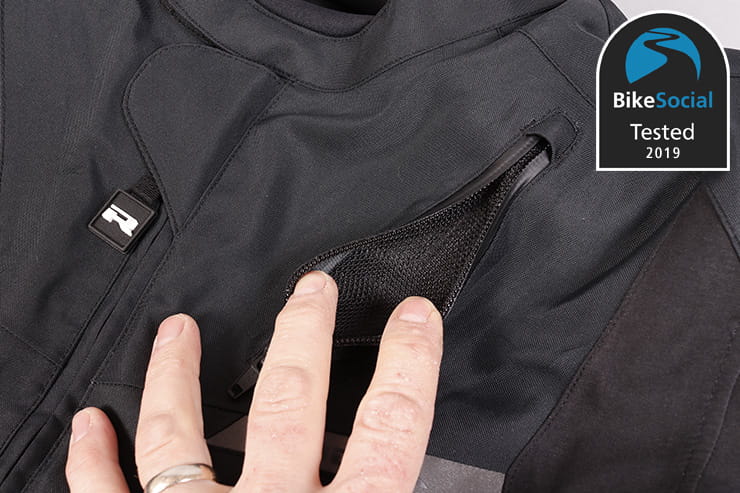 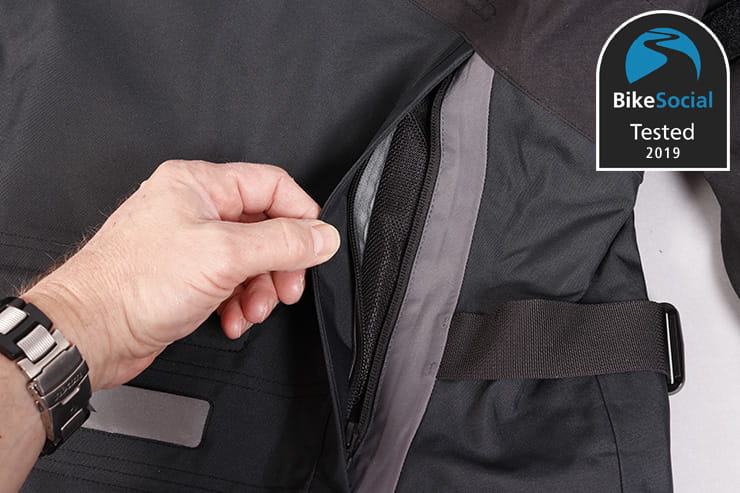 Richa calls it the AVS – Air Ventilation System – and it comprises of two 15cm zips at the front upper chest area to let a cooling breeze in, and two 22cm zips running down either side of the back to let it escape. Because this is a laminated Gore-Tex jacket, there isn’t another layer inside for air to pass through like a conventional jacket, so all of the available air goes directly where it’s required, and the neck can be held open by an elasticated loop and plastic hook arrangement.

I rode the bike over a full day of around 180 miles, which included some of the easier Lake District off-road tracks and A roads, in 23°C heat, which enabled me to test the effectiveness of the system; I was impressed. There isn’t any direct ventilation on the trousers, but without the liners they coped with the warm weather. 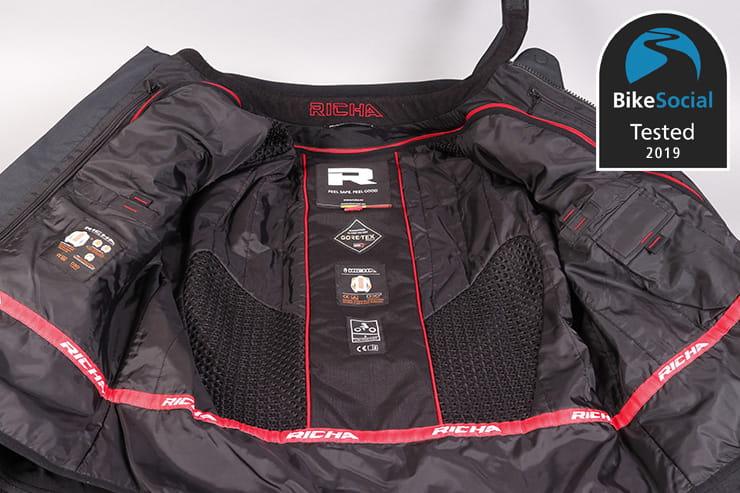 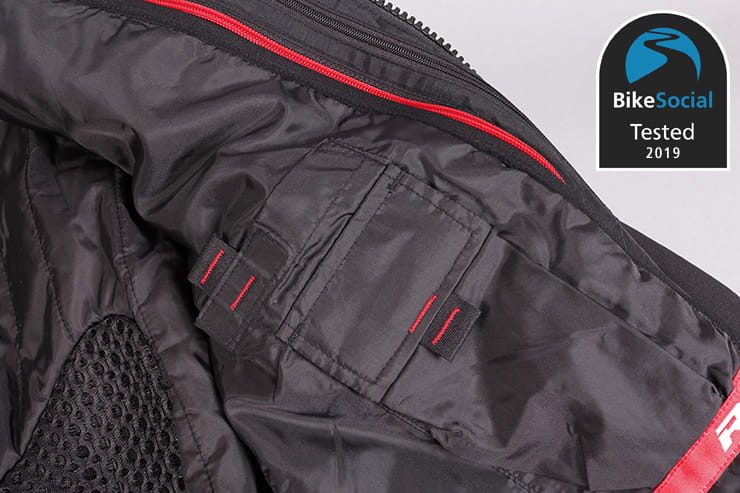 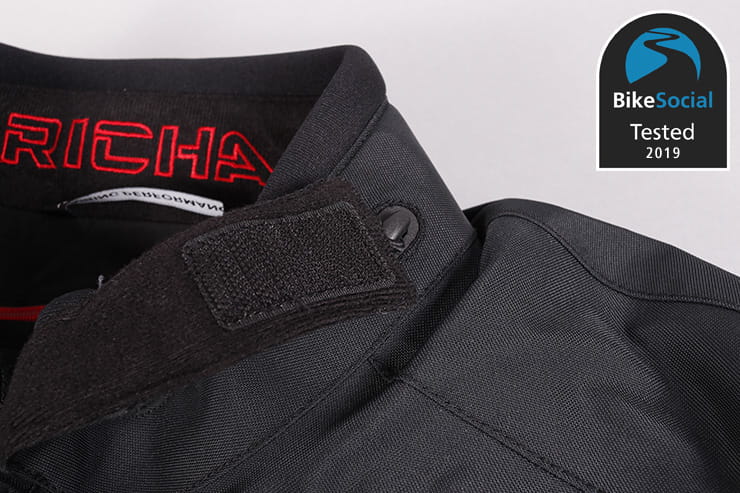 March and April are good times to try out clothing for warmth, being bright enough on some mornings to fool the unwary into thinking it’s warm until the morning chill bites. I did start to feel the cold on some mornings – no more than usual but I don’t wear heated clothing or have heated grips; it wasn’t obtrusive, I just knew it was cold outside.

What this jacket does though is fit so well that air isn’t able force its way in, more so when the trousers are attached and zipped around.

I removed the liner from the trousers when I took my Africa Twin on some trails, and again when I rode around Scotland as I was confident that I would be warm enough without it when the temperature was showing about 18°C. 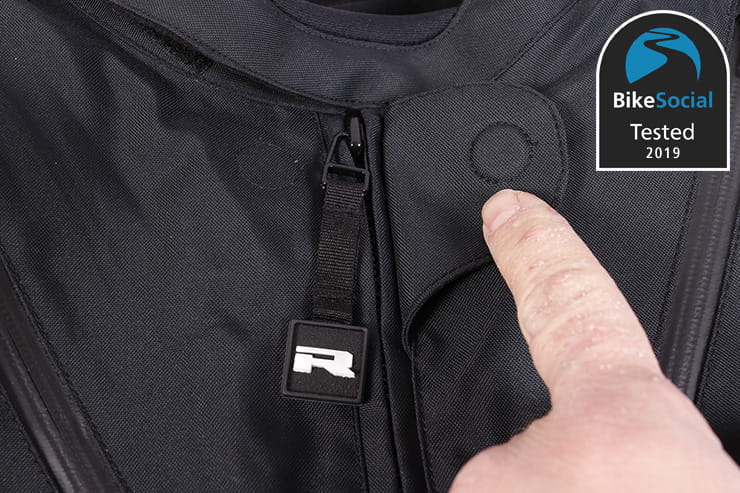 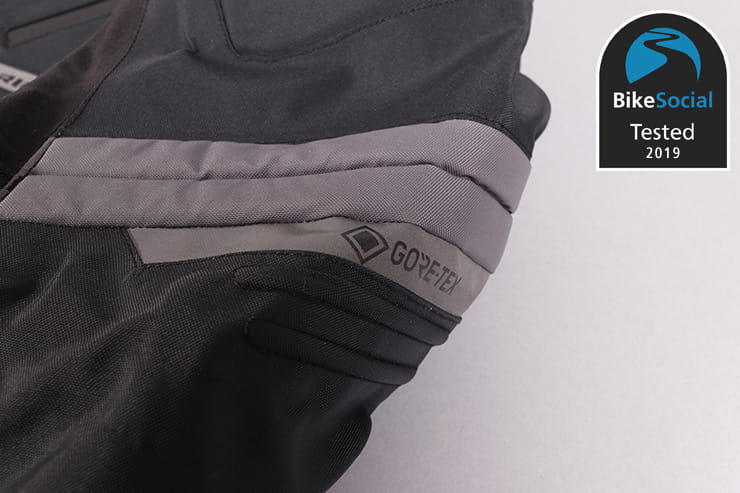 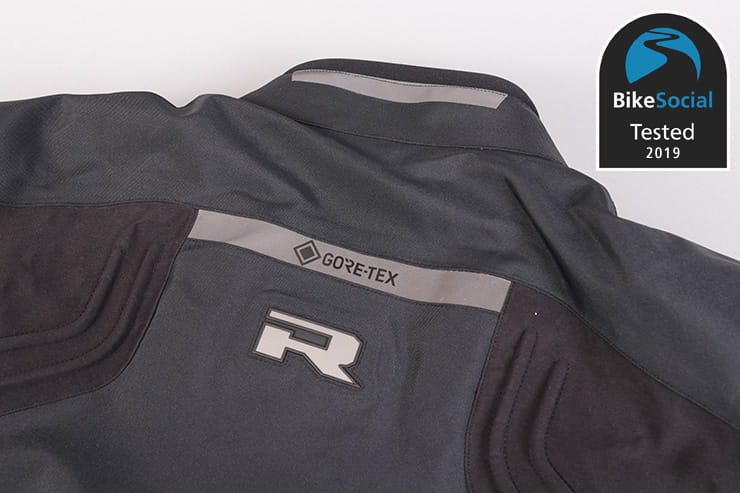 The main outer shell of the jacket is thin thanks to the laminate construction, and the liner follows suit being fairly thin, which aids comfort. There are pockets left and right that mirror the outer jacket, and also a really nice touch of mesh padding around the kidney area for added warmth. The trousers come with a thin quilt liner that’s effective at stopping the cold as the rain and wind have already been stopped by the Gore-Tex laminate construction. 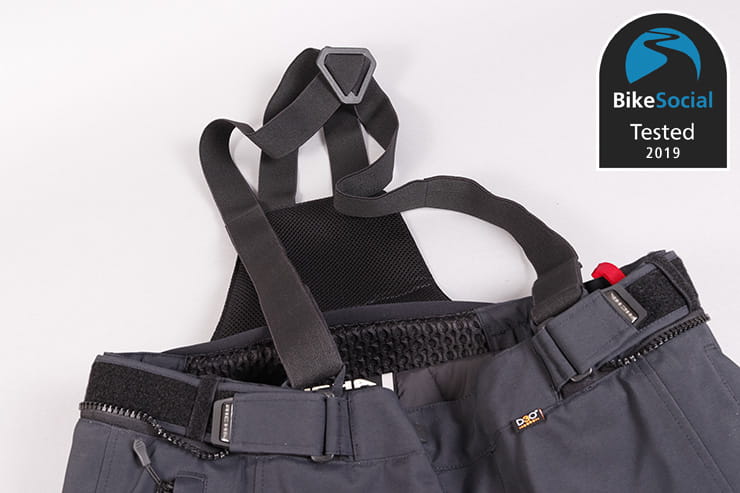 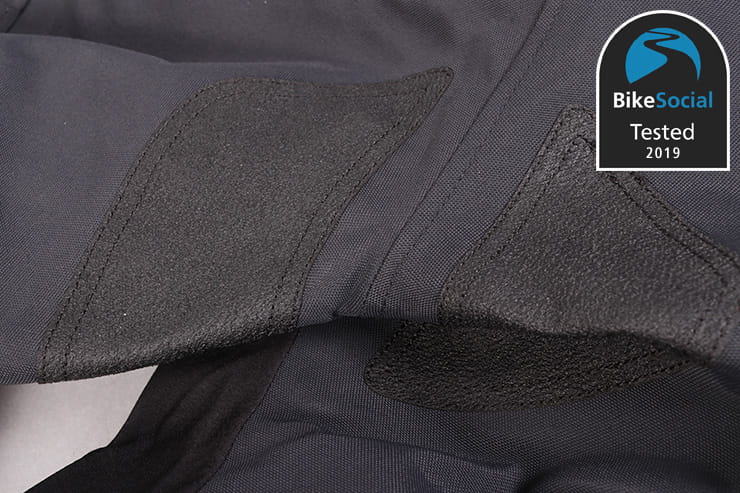 Gore-Tex laminate construction means that the water and windproof Gore-Tex layer is bonded directly to the outer fabric, so the water can’t seep into the outer layer and soak it through. I tried, but to no avail, including a trip on the motorway just after a container ferry arrived, meaning the road was full of HGVs throwing up lots of spray. I remained totally dry inside, and as a plus the water was beading straight off the jacket and trousers.

When I parked the bike up and walked into work I could already see the fabric had repelled the water to such an extent that it was almost dry within a matter of minutes.

The biggest test the Arc jacket and Atlantic trousers had to endure was a 50 mile ride in the high winds and torrential rain of Storm Hannah; again the Richa kit passed with flying colours. 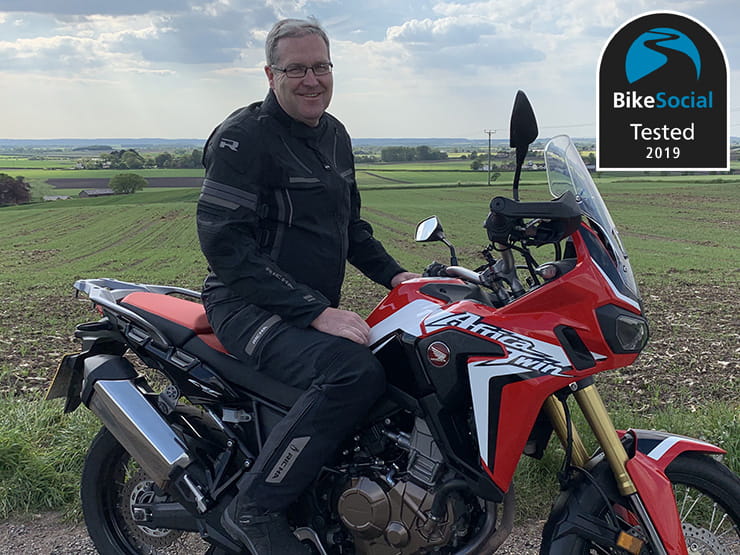 These are Richa’s top line jacket and trousers and it shows. They’re full of the latest technology; laminated Gore-Tex, D30 armour and 3M reflective material all combine to provide a really comfortable piece of clothing, which will matter if you’re going to wear it a lot both on and off the bike.

The assurance that I had felt from wearing them over an extensive period meant that when I did undertake that two-day Scotland trip, I had no qualms about wearing them. It also meant I didn’t have to carry a waterproof over suit.

Nothing has broken, the zips have all worked as they should, the hook and loop hasn’t become fuzzy and lost its catch… This combination looks smart and professional, and both fit me perfectly.

The main point of bike kit is its ability to keep the elements out, and on this point alone Richa has won. The bonus is that to achieve that goal, Richa has uses a myriad of top products and technology, which all pays dividends for the rider.