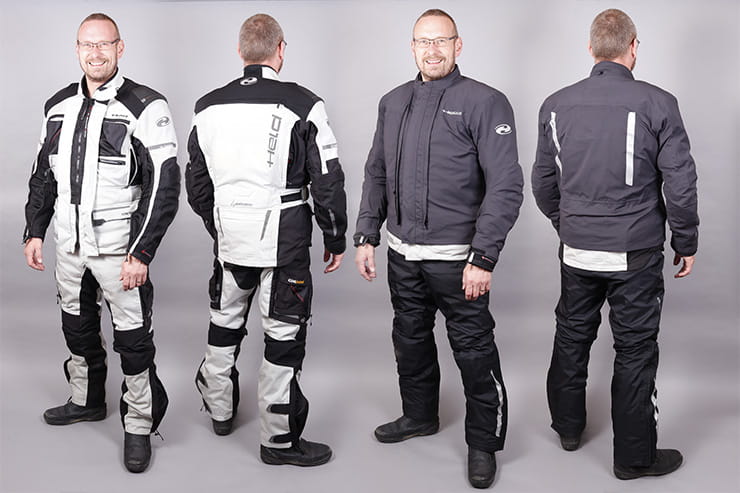 The Held Carese motorcycle jacket and Torno II trousers are designed primarily for adventure riding in hot climates (though they can be used in the somewhat cooler climate of the UK too), having a removable waterproof Gore-Tex membrane that can be worn on the inside or outside of the garments. While also available for £521.99, the version of the Carese jacket tested here is more expensive due to the fact that it has a Helite airbag built in.
I’ve used this kit through winter on naked and adventure bikes, taking in the coldest and the wettest rides… 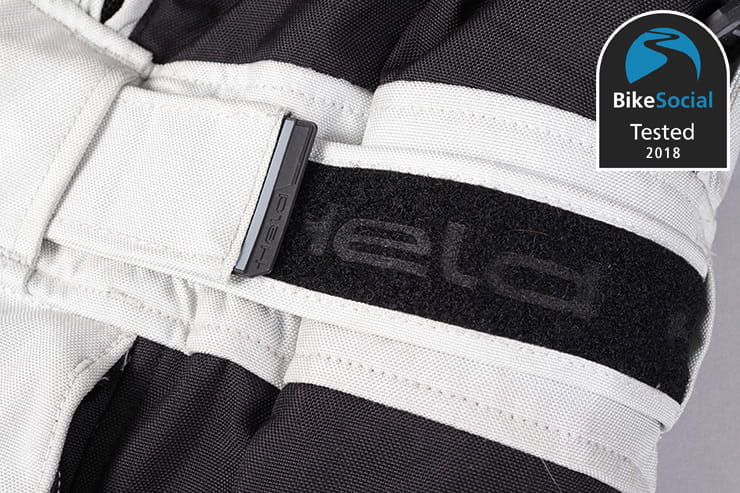 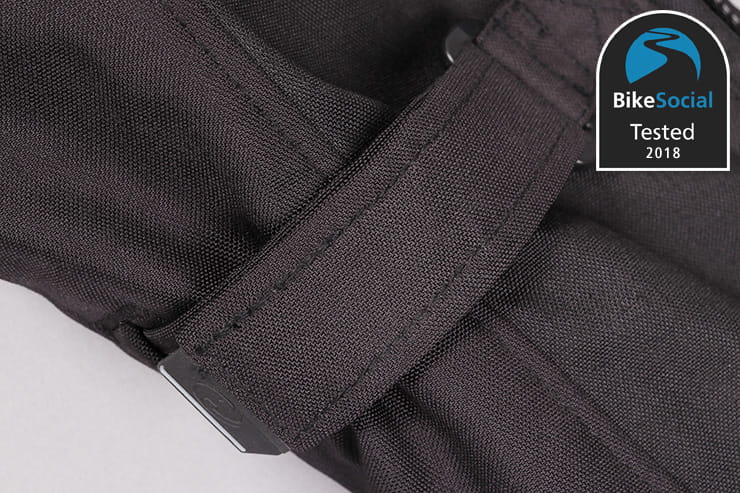 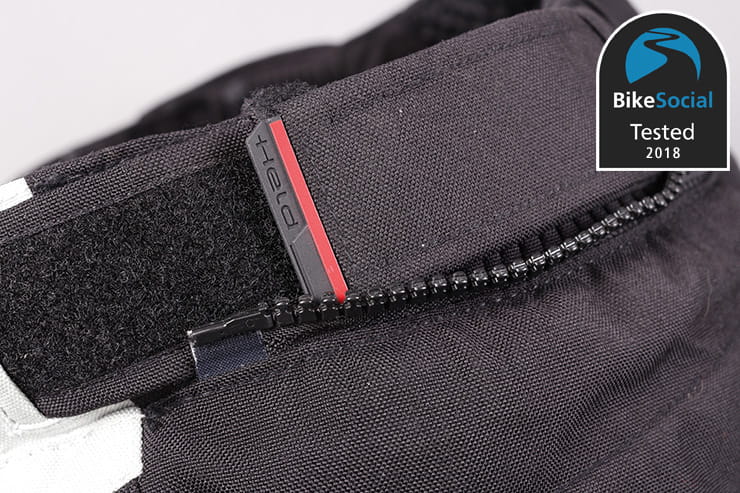 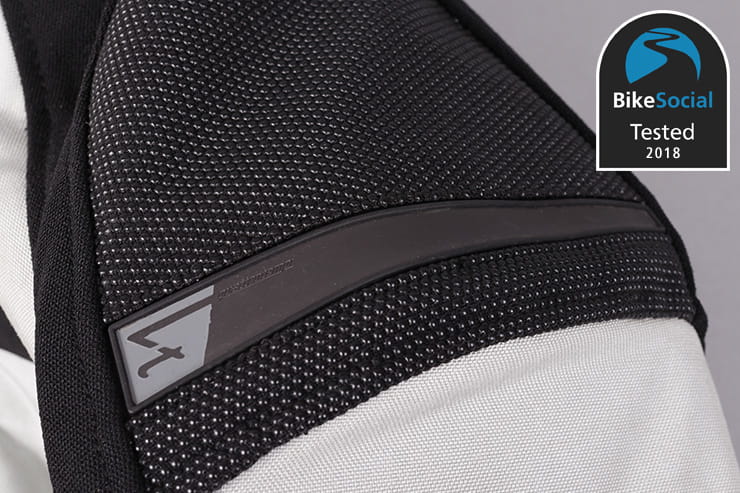 Held’s sizing tends to be very good for me, and the trousers (which are available in longer leg lengths) fit a treat, while the cut of the jacket is just right for my fairly average build.

The Carese’s waist can be adjusted with a pair of Velcro belts at the sides, while the arms can also be tightened up to help prevent the armour moving in a crash, or expanded to fit larger thermals. The jacket is a longer touring-style cut, with an elasticated, adjustable skirt around the bottom edge.

The trousers have Velcro waist adjustment, as well as belt loops and braces attachments.

Because the waterproof liners can be worn over the top of the jacket and trousers, they’re a lot bigger than they need to be when inside – this makes them ruck up annoyingly, particularly at the cuffs.

Due to the airbag, the jacket is very heavy – 4.82kg, compared to 2.82kg for a laminated Gore-Tex Rukka Navigattor. It’s also quite stiff, though it does ease with time; the extra protection unsurprisingly comes at the expense of bulk, though it’s still easier to wear than a separate jacket and airbag. 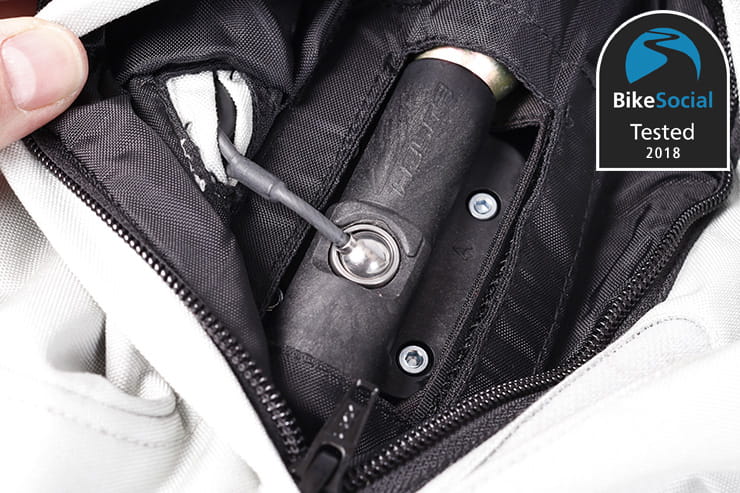 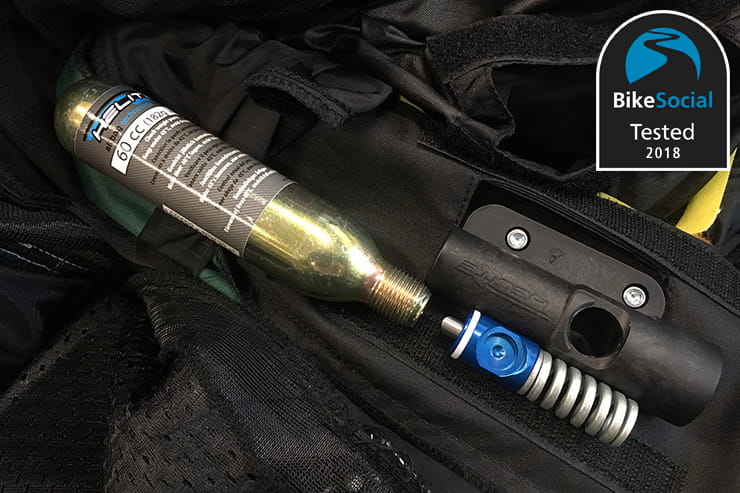 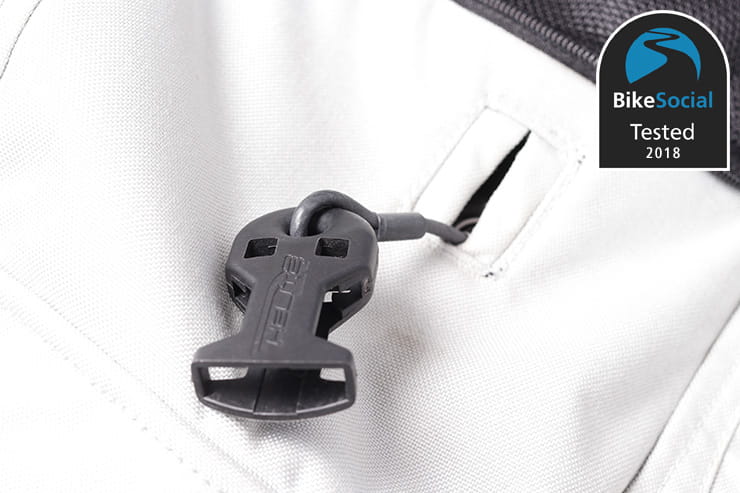 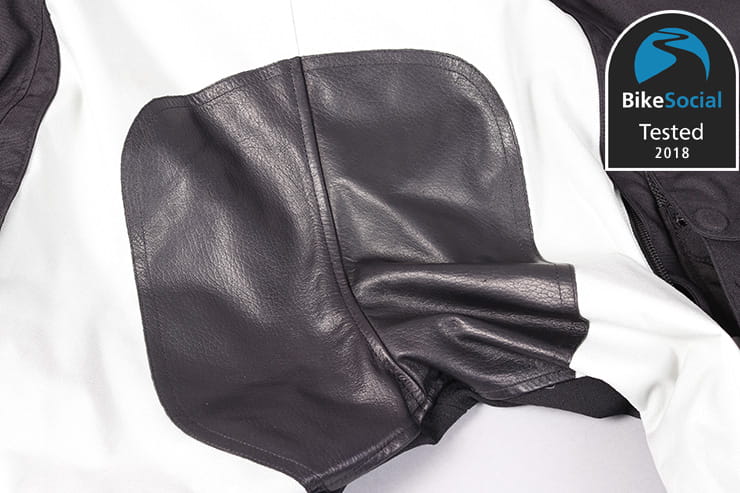 The Carese APS jacket offers superb levels of protection thanks to its built-in airbag. A tough, elasticated strap is attached to your bike (typically just under the seat, near the tank), which simply clips onto the buckle sticking out of the jacket. If you step off the bike to fill up with fuel, it won’t deploy, but given the much greater force of being thrown from the motorcycle in the event of a crash, the airbag inflates in just 0.075 seconds.

With a sharp bang, your head and neck are almost instantly supported, while your chest and back are tucked safely behind a firm cushion of air. It takes your breath away at first, but not to the extent of causing harm or making it difficult to breath.

The airbag immediately starts to deflate slowly, and after a couple of minutes the jacket is back to normal. At this point, the spent 60cc cartridge can be easily removed with just an Allen key, then a new one – which costs just £19 – screwed into place and you’re ready to ride again.

See the airbag in action

Obviously nothing can absolutely guarantee your safety in a crash, but an airbag like this certainly has the potential to save your life. If you low-sided your bike and slid alongside it, it’s possible the air-bag might not trigger, though the alternative is much more expensive electronic systems that typically have to be repaired at the factory if deployed.

The garments themselves have not yet been certified as Personal Protective Equipment. 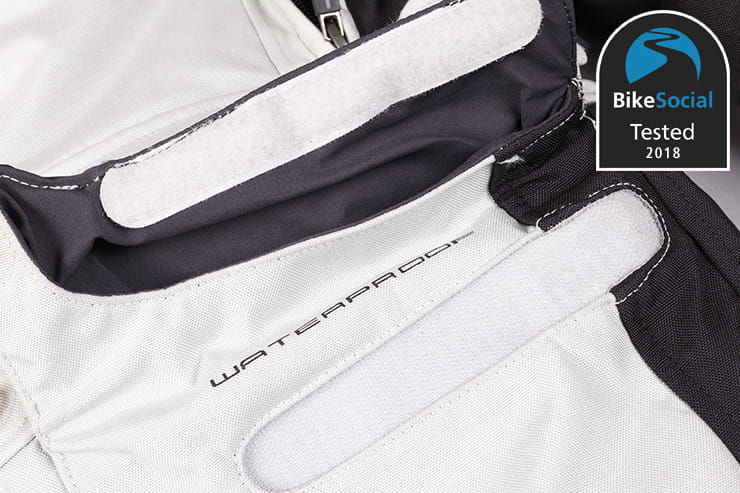 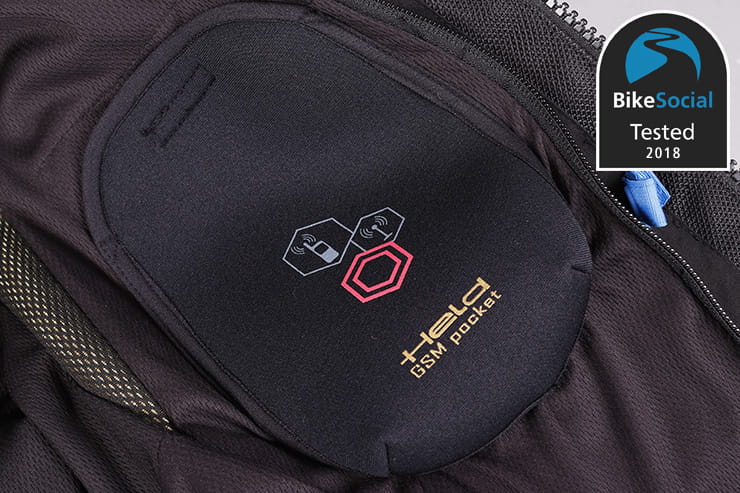 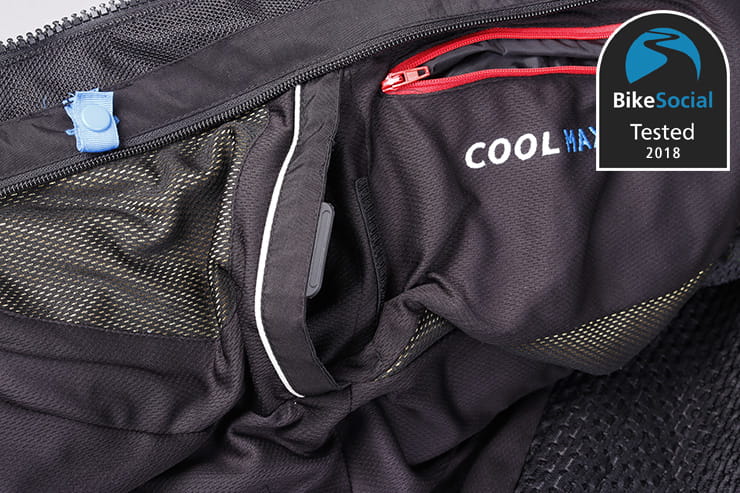 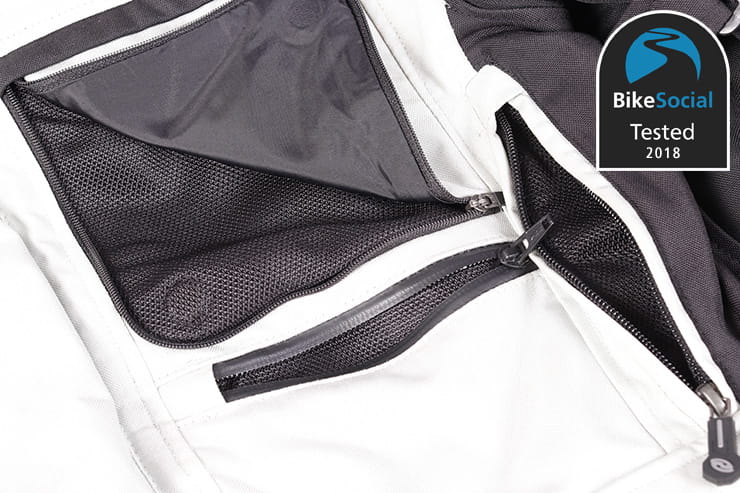 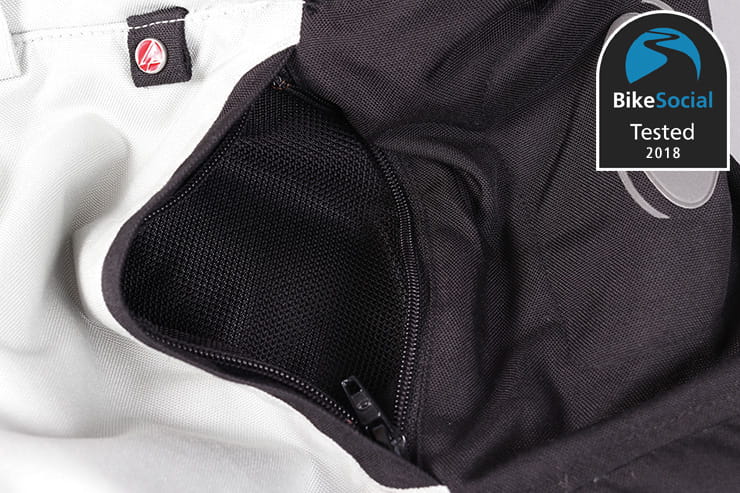 The jacket has two pockets that fold over and secure with Velcro, and do keep their contents dry, though I found it tricky to match the hook and loop patches when the pockets were stuffed with keys, phone etc. There’s also a small pocket with a water-resistant zip on the left breast, and another two pockets on the lower back (handy for pillions).

The inside of the jacket has a Velcro-fastening neoprene sat-nav/phone pouch on the left, and two small zipped pockets on the right. 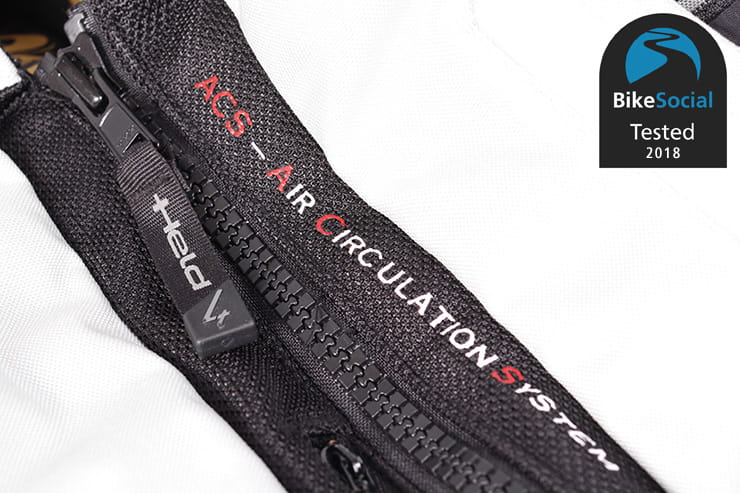 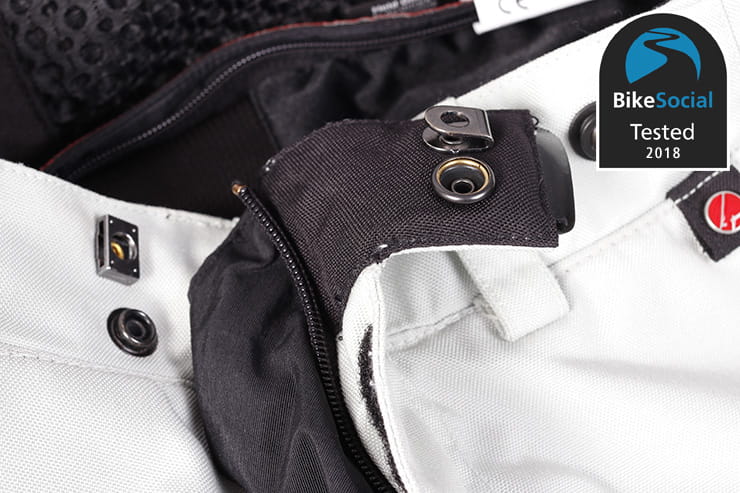 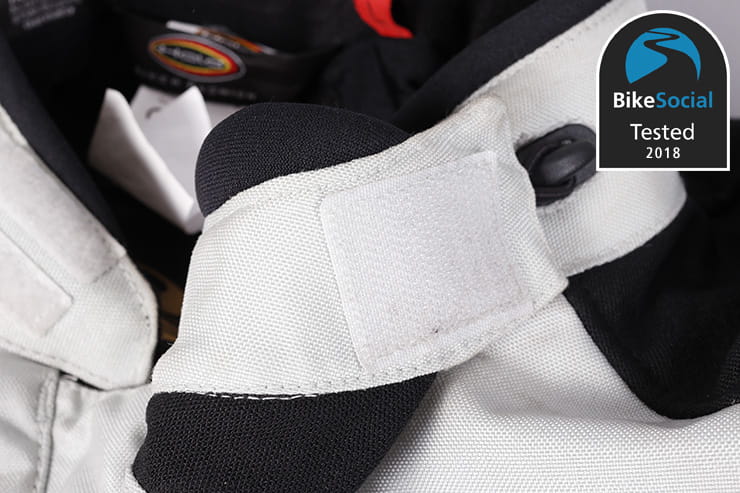 A chunky zip with a handy puller tag is covered by a large pair of storm flaps that secure with Velcro and magnets. These flaps can also be folded back, where they’re retained with further magnets to allow air into the vents on either side of the zip.

The trousers have a zip fly with Velcro cover and a storm cover beneath, while the waist fastens with a popper and a clasp.

Both garments zip together with a full-length chunky zip, though getting the two together takes a little more practice due to the bulk of the air-bag-equipped jacket, and the adjustment strap on the trousers fouling the zip. 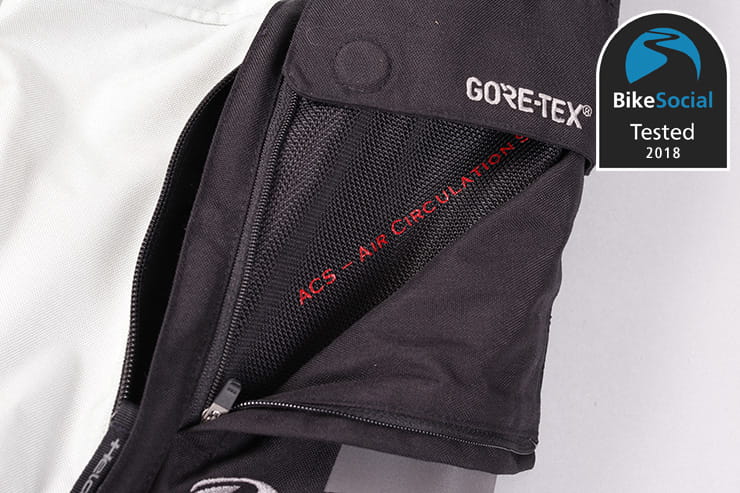 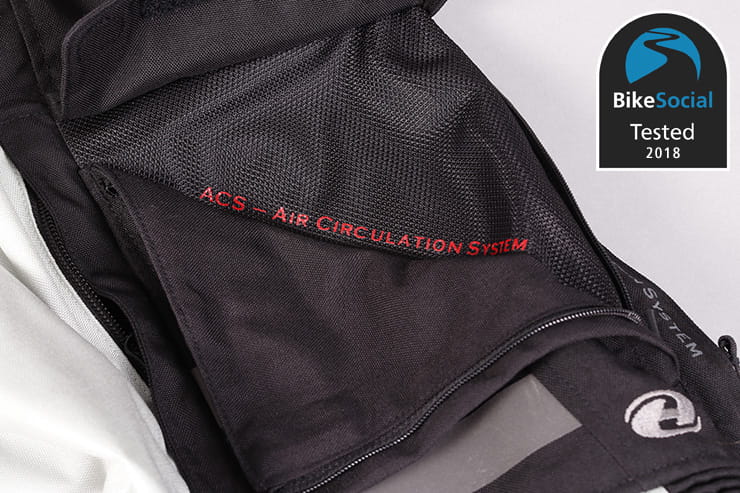 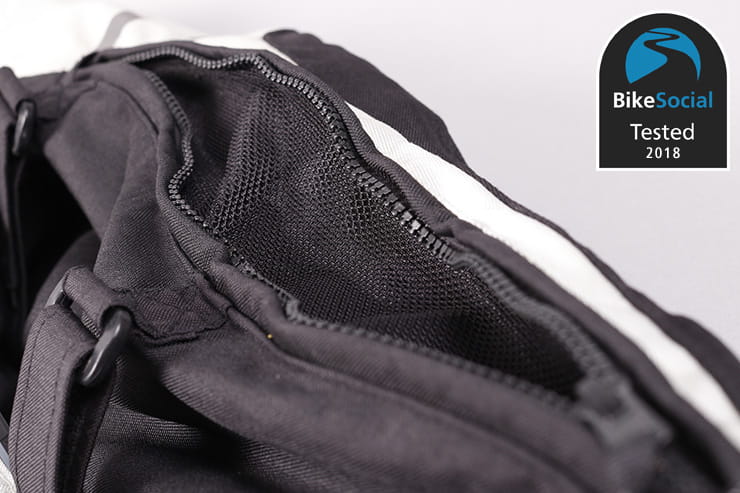 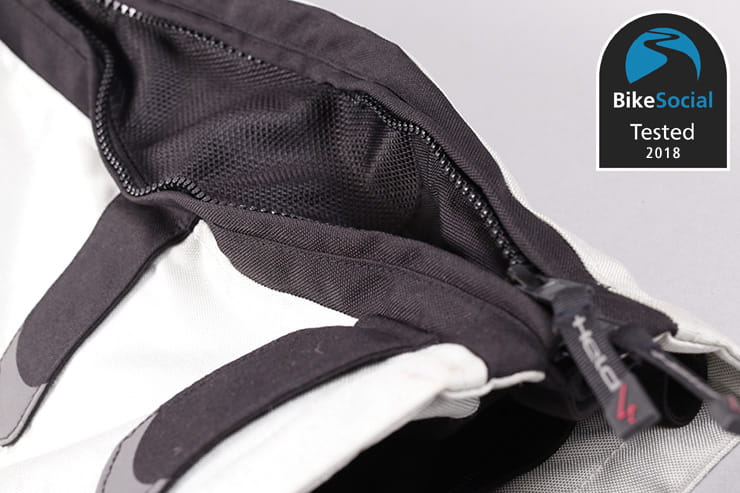 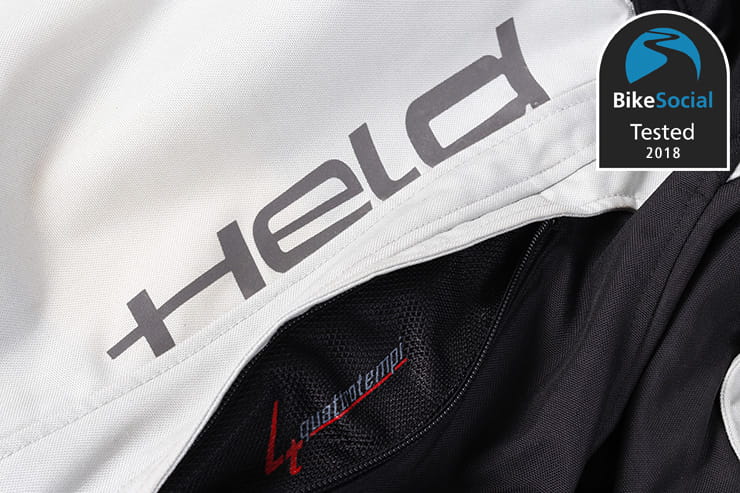 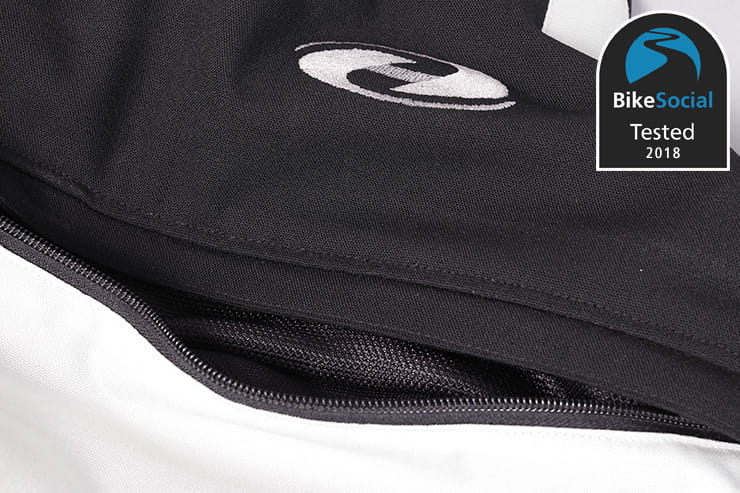 The ventilation on the Carese jacket and Torno II pants is outstanding – on the jacket, the back has two vertical zipped vents, while the front has vents right up either side of the main zip (behind the magnetic storm flaps), two vertical zipped vents running down from just in front of the armpits, and a large pair of zipped chest pockets that fold open and secure with magnets. On top of this, both arms have zips on the front, right up to the armpits (which can be opened to allow air to drive through the mesh panel) and the small front pocket also doubles as a vent.

The trousers have zipped vents from the bottoms of the legs up to the knees, vertical zipped vents on the sides of the upper legs, and further large mesh panels under the small pockets, which can be zipped open and held back with magnets. The pockets also double as vents, being mesh lined.

Overall, this excellent circulation creates a jacket and trouser combination than would be great for riding in hotter climates. It is of course compromised compared to the non-airbag version of the Carese jacket, which would be even more free-breathing, but given the level of protection offered here, the ventilation is outstanding.

No thermal liner is supplied with the jacket or trousers, so combined with the multitude of zips covering mesh ventilation panels, the Carese and Torno aren’t the best for winter riding. I could really feel the cold air against my arms in particular, and wearing a quilted jacket (a Tucano Urbano Reginald) was essential. Even with this, I wasn’t warm – the circulation system was just too effective.

With the waterproof liner on over the outside of the jacket and trousers, I was noticeably warmer as the Gore-Tex membrane covered up the vents’ zippers.

Unfortunately there’s no neck skirt on the jacket, so you’ll need a tube (ideally waterproof) for the worst weather. 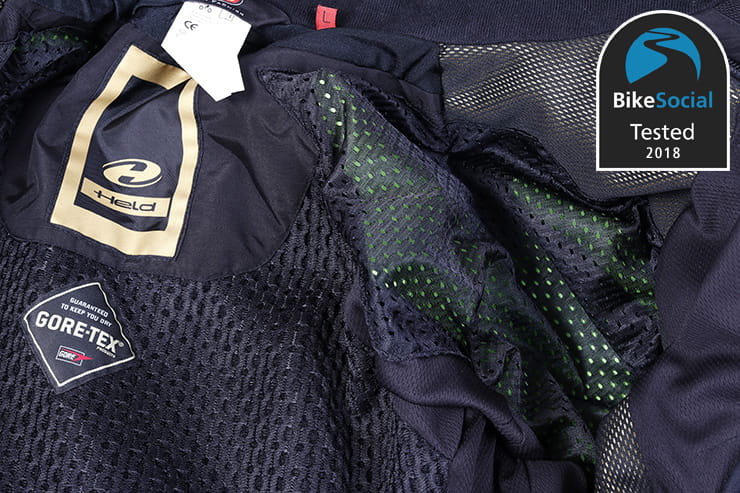 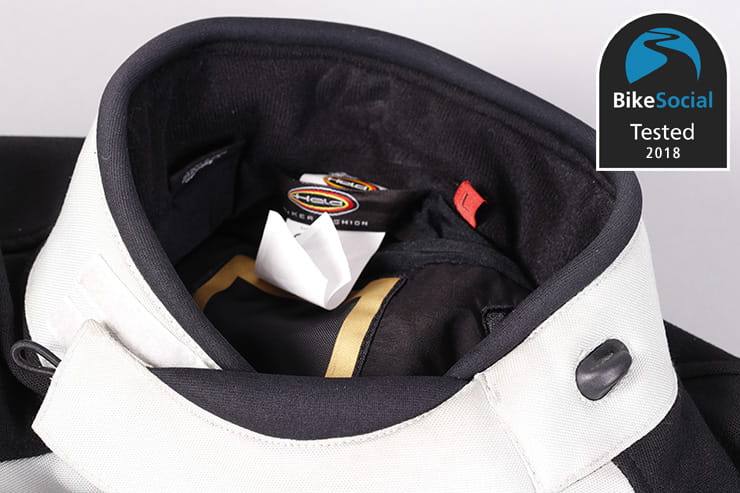 The interior of the jacket is typically high-quality Held, with a 3D mesh panel on the back to help prevent sweating, and an Airtex lining along with other soft but tough materials that make the jacket comfortable against your skin.

For those riding in very hot climates, or off-road, a removable waterproof liner can be a great feature – while they’re breathable, being able to take them out helps keep you much cooler.

But keep in mind that for a UK year-round rider they’re not always such a good thing. The very best waterproofing in motorcycle kit is typically obtained using a laminated Gore-Tex (or other brand) – the membrane is bonded to the back of the outer shell, and water simply shakes off after a ride. However, this is more costly than a drop liner, can be a bit stiffer, and of course isn’t removable.

To be able to take the liner out, it has to be a drop-liner design, which means it has to sit inside the jacket. Most textiles are treated with a Durable Water Resistant (DWR) coating, which makes the rain bead on the outer shell. This wears with time, and while it can be washed back in with the right products, it’s never quite as good. Even when new though, most jackets with a drop liner will ‘wet out’ if used for long enough in heavy rain, meaning the material gets saturated with water. This stops the membrane from breathing, so you get sweaty inside, not to mention the fact that the water on the outside makes you colder. Finally, when you get off your bike, the clothing will be heavy with water, and often takes a long time to dry; it can still be soaking wet when you put it back on.

Some adventure riders will carry a cheap set of waterproofs to put over their textiles in bad weather (to guarantee they stay dry) but Held has come up with the clever idea of making the drop liner in the Carese and Torno large enough to go over the outside of the jacket and trousers.

In practice, this makes for a really bulky liner that’s bunched up at the cuffs when inside the jacket (which also makes it hard to get winter gloves on under the sleeves), and presses against my throat a little while riding. When it’s on the outside, you can’t access any of the pockets (though the airbag strap will reach under), and because the trouser membrane has to go under the main jacket, you can’t zip the two waterproof liners together, leaving the bottom of your textile jacket hanging out, waiting to wick up the rain. You can’t even comfortably wear the membranes for walking around off the bike, as they’re just too big and loose on their own.

As with any waterproofs, if you’re going to wear the liner on the outside, you need to put it on before you hit the rain – otherwise your textiles will soak up the water and keep you wet under the membrane. I couldn’t get the trouser liner over my boots, so they have to come off while at the side of the road.

If you put the membranes on over textiles that have done a few thousand miles, they’ll pick up the dirt from the outside, so you won’t want to zip them in again and have them against your clean clothes until they’ve been washed.

For my riding circumstances in the UK through the year, if I felt the need to have waterproofs over the top of my kit, I’d prefer a cheap set of throw-overs, rather than the compromises in comfort and convenience that these bring.

Ultimately, you have to decide what you’re going to use this kit for – if you’re riding across Europe or into Africa in the summer, the excellent ventilation and peace-of-mind of the air-bag-equipped Carese APS could be an option well worth considering. However, if you’re predominantly a UK rider looking for some year-round textiles, I’d find it harder to recommend these. For rainy commuting, Held has some other great kit, and I’d love to see its laminated textile jacket with an air-bag option for instance…